They just don’t write books on cultural engagement the way they used to. Many works over the last decade searched for “gospel bridges” from the church to culture or scorched the culture for abandoning the values of the church. But with the specter of same-sex marriage hanging over the church the last few years, the message has changed. Yes, Western culture continues to move away from the church. The bigger problem, however, concerns how much the culture has already infiltrated the church.

Russell Moore’s new book, Onward: Engaging the Culture Without Losing the Gospel, wants to “keep Christianity strange.” You might consider 1 Corinthians 1:27 to be its theme verse: “But God chose what is foolish in the world to shame the wise; God chose what is weak in the world to shame the strong.” He doesn’t put much if any stock in evangelicals reaching the culture with the gospel through supposedly respectable means or fashionable political causes. In fact, he doesn’t seem to offer any overarching strategy at all, only the hope that Jesus is coming again and until then promises to build his church. Moore is neither concerned with propping up the Bible Belt nor invested in advancing a partisan political agenda that will save America.

Moore’s job positions him between three groups that do not often get along: older Southern Baptists who fund ERLC and anchored the old Religious Right; younger Southern Baptists and other evangelicals who fight over the balance between grace and truth; and journalists who regularly host him on their TV programs and quote him in their newspapers. 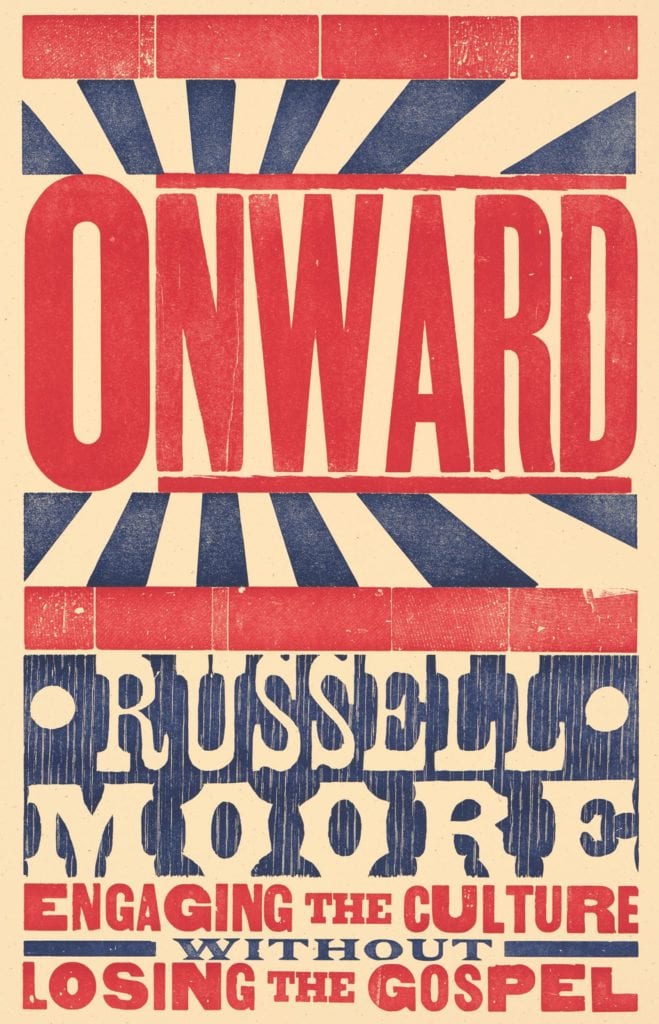 Onward: Engaging the Culture Without Losing the Gospel

Onward: Engaging the Culture Without Losing the Gospel

Age locates Moore in the second group; he does not fit the Religious Right. He must somehow offer compelling arguments for skeptical media while fighting off progressive challengers within the church and assuring talk radio hosts that he hasn’t gone liberal. Rather than try to appease each group, which would be impossible, Moore assumes the prophet’s posture. No one is safe.

Especially as self-appointed watchbloggers continue to expose themselves as deceitful, many readers will resonate with Moore’s warning: “The problem with carnal anger and outrage is that it’s one of the easiest sins to commit while convincing oneself that one is being faithful.” But Moore doesn’t just aim for the easy targets. While he refrains from naming names, readers can’t help but contrast his emphasis on the strangeness and weakness of God’s kingdom with pastors and sociologists who commend contextualization to reach the elite culture-shapers of the major cities.

“The church is not built on the rock foundation of geniuses and influencers but of apostles and prophets,” Moore writes. “Perhaps the best way to gain influence is to lose it.”

What does he mean? Imagine that a janitor in your church offers spiritual counsel and direction to his boss, a less mature Christian. “It would look awfully strange,” Moore says, “but it would look no stranger than a crucified Nazarene governing the universe.”

The best sections of Onward illustrate how the kingdom of God upends the world’s values, which have shaped the church’s practices and priorities.

“The most important cultural task we have is to crucify our incipient Darwinism,” Moore argues, “in which the leaders on the inside of the kingdom colony are the same as they would be on the outside, even if there were no God in the universe.”

Only with the return of Christ in mind can we see the world from God’s perspective. We don’t need any more ministry to the poor, immigrants, or racial minorities, Moore says. We need them to lead us. We don’t need to put on our Sunday best to impress the world. We need the elderly suffering from dementia to read Scripture in our worship services.

Because we know Jesus is coming back, we love the “little people” the way he did.

“The child with Down syndrome on the fifth row from the back in your church, he’s not a ‘ministry project,’” Moore says. “He’s a future king of the universe.”

The hardest part about writing a book on cultural engagement isn’t the fear of offending. It’s trying to cover everything that could fall under “engaging the culture.” You can’t avoid the “ought” problem, when the number of “you must” commands pile up like pet policy proposals in a State of the Union address. Seeing our sin laid bare in all our various failures to love God and love our neighbors can be overwhelming. The author of such a book, then, faces a basic question: How do you convince readers to buy something that identifies themselves as the problem? After all, many—maybe even most—readers pick out books to feel better about themselves or feel worse about someone else.

Moore’s long-term optimism due to the imminent return of Christ helps him mostly avoid this challenge inherent to this genre. When Christians have been known for their dour denunciations, Moore offers the ultimate hope of the gospel in Jesus Christ. I can’t think of anyone I’d rather see representing my faith on TV. Even when this book stung me personally, I could see him pointing back to the Scriptures to remind me what headlines really matter. To make the book even more hopeful and helpful, I think he could have commended prayer for revival, though I acknowledge his rightful reservations about misuse of 2 Chronicles 7:14.

Whether or not they know it or want it, evangelicals need this book for such a time. We cannot turn back to Egypt, where we’ll find “God and country” civil religion that suited the country more than God. Nor can we cry, “Peace, peace” where there is no peace with ideology that denies God’s authority over creation, including men and women made in his image. Because we believe in a God who raises the dead, we can be skeptical about the world we see while hopeful about the world we will see. The city of God will one day triumph over the city of man.