There’s a reason we’re often warned against taking things for granted. The things we assume will always be there are usually the things that get neglected on the backburner. This can also happen theologically. As Protestants, we’re good at debating doctrines like soteriology, ecclesiology, and worship. If we take our doctrine of God for granted in our discussions, however, we won’t realize when it’s being tinkered with, misapplied, or even replaced. A timely and well-met remedy to this problem is Matthew Barrett’s new work, None Greater: The Undomesticated Attributes of God.

In a theological climate where a large portion of American evangelicals believe things contradictory to the Christian faith, None Greater comes as a spring in the desert. While Barrett—associate professor of Christian theology at Midwestern Baptist Theological Seminary—has every right to bemoan the ease with which many can find biblical passages about building a wall while seeing no problem with the statement “Jesus was the first and greatest being created by God the Father,” grilling evangelicalism isn’t his goal. None Greater is a constructive and doxological work, showcasing the beauty of an orthodox doctrine of God. 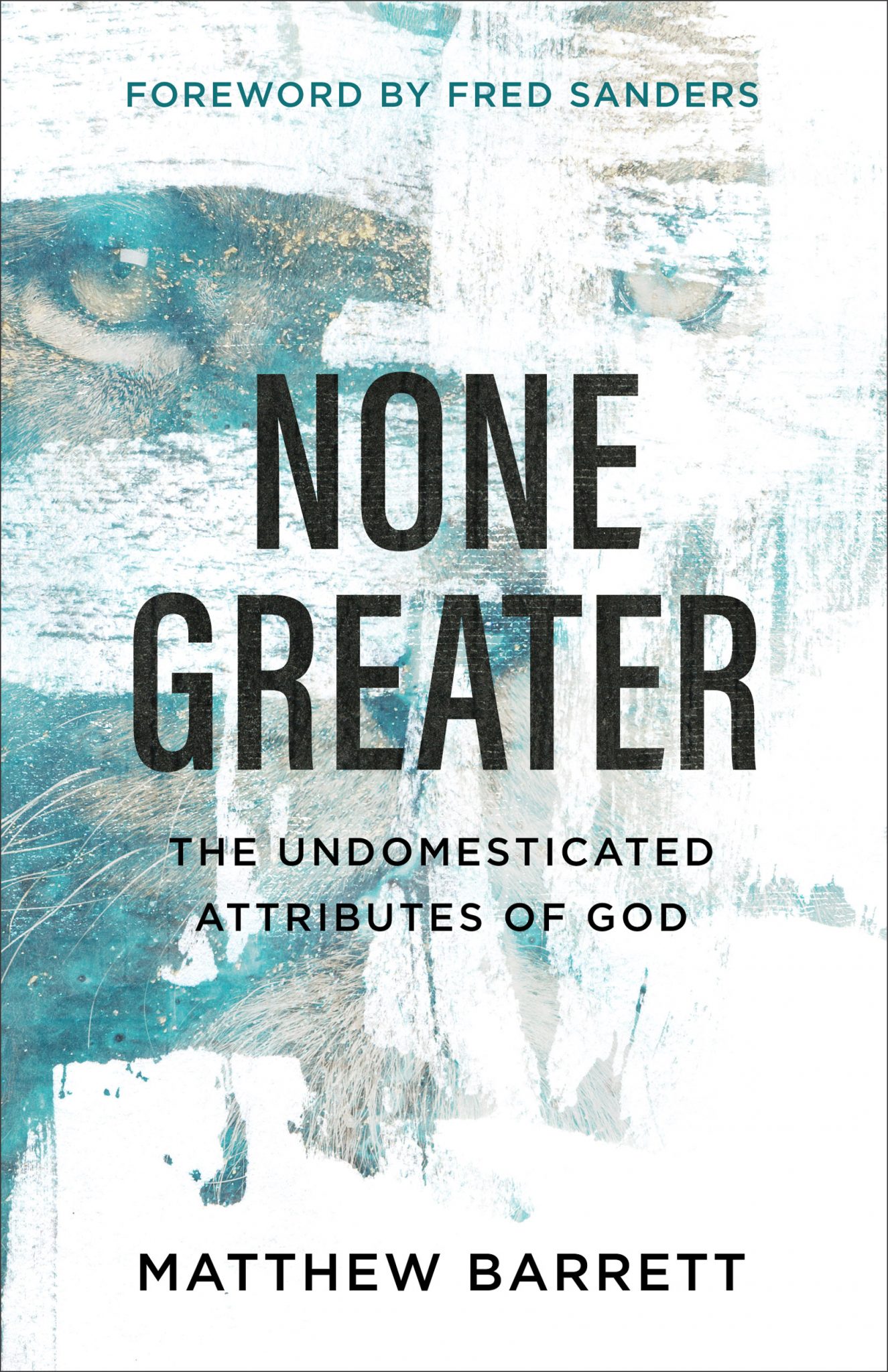 None Greater: The Undomesticated Attributes of God

None Greater: The Undomesticated Attributes of God

For too long, Christians have domesticated God, bringing him down to our level as if he is a God who can be tamed. But he is a God who is high and lifted up, the Creator rather than the creature, someone than whom none greater can be conceived. The attributes of God show us exactly why God is worthy of worship: there is none like him. Join Matthew Barrett as he rediscovers these divine perfections and finds himself surprised by the God he thought he knew.

Barrett first helps us find confidence in how we can truly know God at all. Since the Enlightenment, modernity often deals in dichotomies, giving man the options of univocal and equivocal knowledge; either we know God absolutely, the way God knows himself (univocal knowledge), or we know nothing at all, and all reality is merely our interpretation (equivocal knowledge) (33). Barrett draws on Augustine and Calvin to explain that, even though we’re finite creatures and can’t exhaustively comprehend our infinite Creator, we still can truly know him.

Modernity has it backward: We don’t hypothesize our way to God; God reveals himself to us. He doesn’t reveal his entire essence to his finite creatures, lest his glory consumes us (Ex. 33:22; Heb. 12:29). Instead, like a nurse to a child, he “lisps” to his creation. He accommodates our faculties and speaks to us in his Word in a way we can understand.

We don’t hypothesize our way to God; God reveals himself to us.

For example, Barrett highlights that though God doesn’t literally have eyeballs and wings, as the psalmist will at times attribute to him (Ps. 17:8; 34:15); nonetheless, these analogies tell us true things about God. His “eyes” depict his omniscience, and his “wings” tell us that he is our haven and our refuge. Just as our language of God is analogical, so is our knowledge. Since our knowledge is an analogy of God’s perfect knowledge, we know we’re at least capable of knowing the truth about God and the world. Being made in God’s image, we’re not God, but we’re like God. In theological terms that Barrett explains and applies, God’s knowledge of himself and reality is the archetype, while our knowledge is the ectype. In other words, our knowledge is a “derivative,” a “copy” and “imitation” of the original.

Here is where Barrett’s subtitle and the Creator-creature distinction play such an important role: Because God isn’t made with human hands as the idols of other nations, and because God isn’t contingent on the world (as Greek philosophy asserts), he can’t be viewed as a larger version of mankind. He isn’t a projection of man into the heavens. The distinction between Creator and creature isn’t a size difference. “He is not a God who simply possesses our powers but in endless measure,” Barrett warns. “No, an infinite God transcends our characteristics altogether” (44). Barrett goes on to explain that this is why God’s love, judgment, mercy, jealousy, and the rest of his attributes don’t contradict each other (234). Because God isn’t like man but is in himself perfect, all he does is perfect.

The distinction between Creator and creature isn’t a size difference.

The reason God can do all things perfectly is explained by his attribute of simplicity. This attribute, Barrett explains, gets at the idea that God isn’t made up of parts. In other words, he’s not merely a recipe of attributes. Unlike created things that are good and bad on varying degrees, God is all of his attributes simultaneously: “Is something true because God says it is true, or does God declare something is true because it is true? The question betrays God’s simplicity. God doesn’t bow to some external norm for truth, nor does he invent truth ex nihilo. God is truthfulness itself. All truth is truth because it mimics the very nature of God, who is truth. . . . If God is a simple God, then he is his perfections eternally” (80–81).

These insights are what makes None Greater stand apart. While systematic theologians have a knack for complicating things, Barrett breaks from the stereotype and applies these doctrines both practically and pastorally. He shows that the orthodox doctrine of God isn’t merely a philosophical paradigm placed over the Bible. Rather, he shows the reader that these attributes of God do the most justice to the biblical text, arising out of the Scriptures themselves. Barrett’s work teaches us how these doctrines help to hold all of the Scriptures together, rather than pitting them against each other as if passage x contradicts passage y.

None Greater does many things beautifully: it handles lofty concepts faithfully, yet it applies them practically, refusing to jettison these conversations just for the theologians.

The language of “regret” is not meant literally but serves as a signal, indicating to the reader not only that God has judged Saul but that God’s plan all along has been to raise up a king after his own heart. By declaring his “regret” God is announcing that this new king is on the horizon (“The Lord has torn the kingdom of Israel from you . . . and has given it to a neighbor”). (107)

Since God isn’t simply “the big guy upstairs,” we know that all of our language and metaphors of him—rock, lion, tower, light—aren’t comprehensive of his essence. Instead, the biblical authors “believe they are communicating who God is in relation to the created order by means of his mighty works and words” (128).

While many depict Christian dogma as the yardstick that keeps people away from Jesus and the Bible, Barrett reveals to the reader how nurturing these doctrines are for the Christian. Rather than cold and rigid rules, because the doctrines come out of the Scriptures they naturally nourish and comfort the sheep. They not only guard us against the wastelands of heterodoxy, but they also help us cherish the fact that God is God, and we’re not.

Like its subject matter, None Greater does many things beautifully: It handles lofty concepts faithfully, yet it applies them practically, refusing to jettison these conversations just for the theologians. This is perhaps the book’s crown jewel. Barrett shows us that the beauty of these doctrines are such that no one should take them for granted.