Since the Enlightenment, it’s often been said that a decrease in religious adherence is coupled with a decrease in superstition. Where religions fade, reason, science, and progress take root. In recent years, however, such theses have been taken to task. As religions and their creeds are maligned in secular society, so too are all institutions and channels of authority. Institutions, in a godless world, have instead been replaced by intuitions. Or so says Tara Isabella Burton, in her new book, Strange Rites: New Religions for a Godless World.

Strange Rites takes a hard look at the practices and beliefs of the Spiritual But Not Religious (SBNR), the “Nones,” and the “religious hybrids”—and diagnoses how these groups are not so much abandoning religion as they are remixing it (18–22).

As religions and their creeds are maligned in secular society, so too are all institutions and channels of authority. Institutions, in a godless world, instead have been replaced by intuitions.

Burton—a contributing editor at the American Interest and a columnist at Religion News Service—frames much of her analysis of the religious-remixed through the work of French sociologist Émile Durkheim (1858–1917). One of the founding fathers of the social sciences, Durkheim classifies religions by the practices and habits they rehearse as a community instead of by their statement of faith. This sociological dimension to religion allows Burton to look at the landscape of secular movements like fandom culture, self-care blogs, Wicca, polyamory, social-justice activism, and alt-right groups, to see how they imbue their adherents with religious meaning, purpose, community, and ritual:

[Intuitional religion] is sustained not through a top-down hierarchy, or through some invisible spirit, but rather through the collective energy of its adherents, a process [Durkheim] calls “collective effervescence,” a shared intoxication participants experience when they join together in a symbolically significant, socially cohesive action. (27)

The religious-remixed movements do not fall out of the sky. They are “deeply indebted to both the rise of internet culture and the proliferation of consumer capitalism” (35). Throughout Strange Rites, Burton explains in detail how the internet allows many to package, brand, and sell “experientially satiating substitutes—many, though not all of them, poor—for well-developed ethical, moral, and metaphysical systems” (13).

The remixed structural substitute for these systems, according to Burton, is found in fandom culture. Through social media and public forums, we’re now able to track down or attract people who are like us (61). Internet fandom culture so enmeshes a property’s fans to the property itself that fans now see themselves as a part of the franchise (84).

A primary example is the fandom centered around Harry Potter. More than how J. K. Rowling’s franchise created entire online subcultures and personality tests based on its fictional houses (I’m a Ravenclaw, by the way), Burton shows the franchises’s reception as a religious text. She writes that “in an age when fewer and fewer people read the Bible, the media properties of fan culture are the closest thing the Remixed have to sacred texts” (72). Enmeshed fans who coalesce online have been shown to rally, demand, or troll their way to influence the arc of their favorite properties. Because of fandom, “we expect stories made specifically in our image” (88), which means there will be a head-on collision with any religion that refuses to edit its sacred texts accordingly.

Because of fandom, ‘we expect stories made specifically in our image,’ which means there will be a head-on collision with any religion that refuses to edit its sacred texts accordingly.

While Burton doesn’t focus on subcultures within the church, it too has its own versions of these movements. On social media, you can find Episcopalian Furries, Progressive Lutherans for Polyamory, and Christians who turn “call-out culture” into a hobby. Which, as Burton notes, “serves as [a] psychic methadone, providing us with a brief and illusory hit of moral belonging” (13). With the internet, nothing is stopping you from breaking free of the “normies” in evangelicalism: you can find the residual enclaves of theonomists, patriarchalist blogs telling men to not do the dishes, neo-Confederates trying to “EXPOSE the LIBS!”, private Facebook groups whose members make fun of, chide, and denounce those not “Truly Reformed,” and more.

Christians, too, are peering into movements and groups online, seemingly longing for membership anywhere other than their local church.

Next up, Burton sets her sights on wellness culture and self-care, the “implicit theology” of the religious-remixed:

We are born good, but we are tricked, by Big Pharma, by processed food, by civilization itself, into living something that falls short of our best life. Our sins, if they exist at all, lie in insufficient self-attention or self-care: false modesty, undeserved humilities, refusing to shine bright. We have not merely the inalienable right but the moral responsibility to take care of ourselves first before directing any attention to others. We have to listen to ourselves, to behave authentically, in tune with what our intuition dictates. (94)

The brands that tote self-care see the self as a microcosm of the universe: by purging the impurities and toxins from your body (with the help of expensive supplements sold by your favorite Instagram Influencer—don’t forget to enter their promo code at checkout!), you help to purge the impurities and toxins from the world as well (165). This has the basic structure of the creation, fall, and redemption story found within Christianity.

Christians, too, are peering into movements and groups online, seemingly longing for membership anywhere other than their local church.

Burton shows that self-care—from meditation to CrossFit, from burning sage to experimenting with polyamory—can be used as a kind of “self-optimization: encouraging users to focus on themselves—their thoughts, their needs, their desires—in order to . . . improve their surroundings” (108). If the world seems chaotic, at least our moisturizer routine and uninhibited sex serve as ways of freeing ourselves from the world’s oppressive structures.

[Our sexual liberation and self-care] replace the extrinsic bastions of morality and authority—the state, the church, the institution of marriage—with the self. We are the arbiters not just of our personal or sexual lives, but of our own individual moral universe. Our acts are sanctified and solemnized. (164)

With the structure of fandom culture and the theology of wellness, the religious-remixed need a civic religion. As Burton notes, though, the remixed civic ideals aren’t entirely compatible; in fact, they’re currently duking it out over which will win: social justice activists, Silicon Valley techno-utopians, or the alt-right.

While these systems seem starkly different, each places the “fundamental judgments of goodness, morality, and progress in the hands of human beings, not God” (169). While social-justice activists enthrone the lived experience as a means to determine civic morals (167), techno-moguls and their fans aspire to hack and enhance the human body: 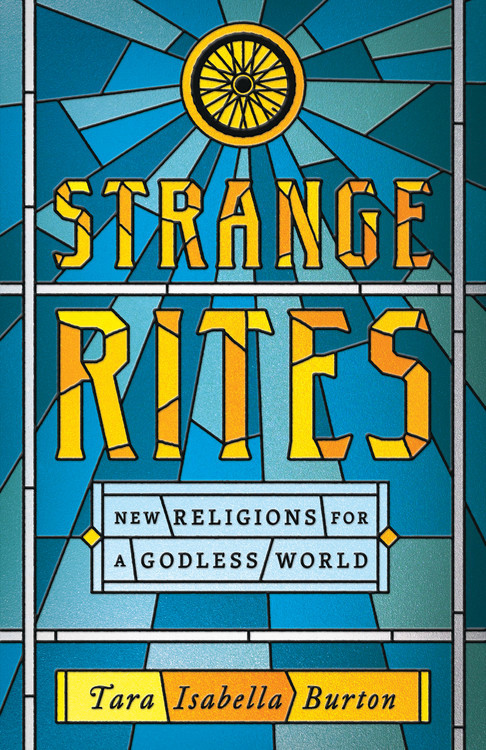 Public Affairs. 320 pp.
While rejecting traditional worship in unprecedented numbers, today’s Americans are embracing a kaleidoscopic panoply of spiritual traditions, rituals, and subcultures—from astrology and witchcraft to SoulCycle and the alt-right. As the internet makes it ever-easier to find new “tribes,” and consumer capitalism forever threatens to turn spirituality into a lifestyle brand, remarkably modern American religious culture is undergoing a revival comparable with the Great Awakenings of centuries past. Faith is experiencing not a decline but a Renaissance. Disillusioned with organized religion and political establishments alike, more and more Americans are seeking out spiritual paths driven by intuition, not institutions.
Public Affairs. 320 pp.

The seeming tyranny of biology—the apparent gender binary, or even death itself—can be overturned or else overwritten. Both groups valorize transcendence, not off the material plane but rather within it. To transcend biology or to transcend deep-rooted prejudices is to achieve a kind of earthly divinity. (169)

The moral compass in these civic views is pure self-actualization. Any system standing in the way of activating your true self—be it political or biological—must be overturned. If you don’t have the stomach to burn the system down or harvest the blood of the young to inject it into older bodies (an experimental anti-aging treatment called parabiosis, heavily funded by billionaire Peter Thiel), then you’re only in the way (192).

While these two views demand that our place on the political and biological ladders of life be moved by force, alt-right groups admonish these modern notions and demand we embrace our determined place in society.

[Biological determinism] offers not a glimpse of hope but rather a portrait of despair. The matriarchy has won. Men are evolutionarily useless in a technological age. The only way forward is total irony or absolute destruction. Violence, including racist and misogynist mass violence, is desirable not merely because it might achieve a specific political end, no matter how noxious, but because it causes total chaos. (227)

The alt-right embraces a Nietzschean nihilism as a way to combat what they see as the destructive feelings-oriented views of progressives. In this remixed-religion, we need to find spiritual and moral meaning in primal nature and the politically incorrect myths of ancient society (205).

It should be noted that Burton’s goal isn’t to deconstruct the religious remixed with biblical exegesis. In fact, Strange Rites isn’t a moral argument against these groups and trends. Her polemical work is more subtle. Merely by looking at the intellectual history behind each of these movements, she demystifies much of the spark and glamor that makes these religions so attractive to younger generations.

Merely by looking at the intellectual history behind each of these movements, Burton demystifies much of the spark and glamour that makes these religions so attractive to younger generations.

As she writes in the introduction, Burton is unmasking the “charlatans” peddling “substitutes” for religion (13). For this reason, Strange Rites—no matter its often abrasive subject matter—is an important read for anyone trying to grasp how a godless world is, in fact, oozing with spirituality.