If you asked missionaries about the greatest needs in cross-cultural missions today, most wouldn’t suggest professionalism. But for Matt Rhodes, a veteran missionary among Muslims in North Africa, it’s at the top of the list. In No Shortcut to Success: A Manifesto for Modern Missions, Rhodes argues that modern missions is suffering because modern missionaries aren’t professional.

This may be a provocative claim, especially for those familiar with John Piper’s Brothers, We Are Not Professionals. Addressing pastors, Piper argues, “The more profes­sional we long to be, the more spiritual death we will leave in our wake” (1). Is Rhodes taking issue with Piper, or is something else afoot?

The issue for Rhodes is that in recent decades a sizable and influential swath of the missions community has increasingly minimized certain elements of the missionary task, like adequate theological training, deep knowledge of the language and culture, and the necessary role of teachers. As a result, many missionaries today are not investing the time and resources necessary to acquire such “technical skills.” New methodologies—motivated by a desire for quick results and by certain assumptions about how God works—explicitly reject such technical skills not only as unenlightened relics of a bygone era but even as harmful obstacles that impede the emergence of rapid movements of God that result in massive numbers of new Christians. 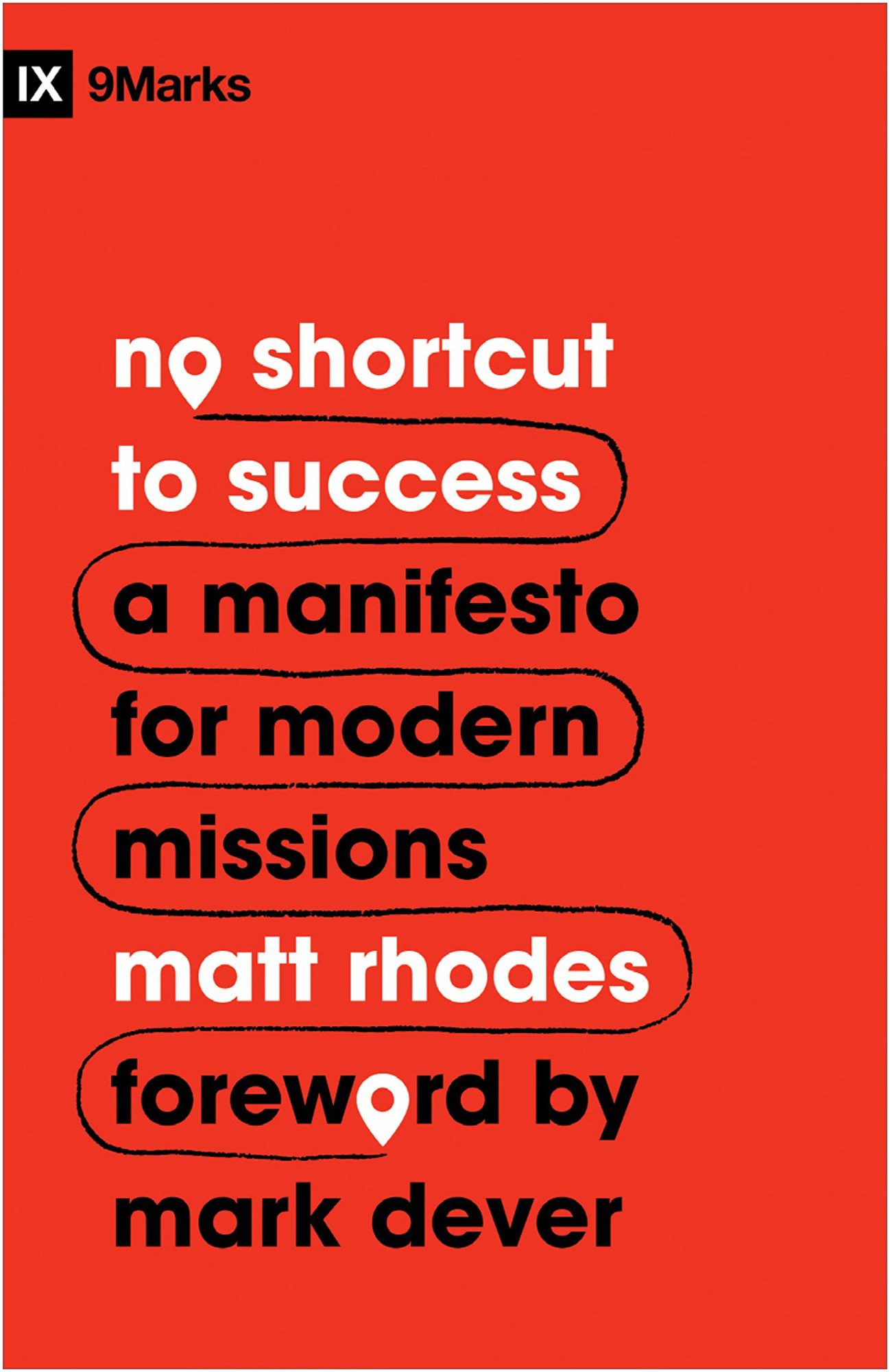 Trendy new missions strategies are a dime a dozen, promising missionaries monumental results in record time. These strategies report explosive movements of people turning to Christ, but their claims are often dubious and they do little to ensure the health of believers or churches that remain. How can churches and missionaries address the urgent need to reach unreached people without falling for quick fixes?

In No Shortcut to Success, author and missionary Matt Rhodes implores Christians to stop chasing silver-bullet strategies and short-term missions, and instead embrace theologically robust and historically demonstrated methods of evangelism and discipleship―the same ones used by historic figures such as William Carey and Adoniram Judson. These great missionaries didn’t rush evangelism; they spent time studying Scripture, mastering foreign languages, and building long-term relationships. Rhodes explains that modern missionaries’ emphasis on minimal training and quick conversions can result in slipshod evangelism that harms the communities they intend to help. He also warns against underestimating the value of individual skill and effort―under the guise of “getting out of the Lord’s way”―and empowers Christians with practical, biblical steps to proactively engage unreached groups.

The methodologies Rhodes has in mind are movement-focused approaches like church planting movements (CPM) popularized by David Garrison, the disciple-making movements (DMM) of David Watson, and the Training for Trainers (T4T) of Steve Smith and Ying Kai. I can’t claim objective evidence, but my own experience suggests Rhodes has rightly identified the key sources and rightly assessed their influence in the missions community. My full-time missionary career began in 1998, just as the CPM wave was picking up steam. After more than 20 years on the field, it seems that movement-focused approaches are simply assumed orthodoxy in many circles.

Part 1 of No Shortcut to Success interacts significantly with primary sources from these movement-focused approaches. Rhodes doesn’t engage in a cancel-culture dismissal. He expresses appreciation for their focus on things like broad gospel proclamation, inductive Bible study, and reaching entire communities rather than extracting individual converts from their family and social networks.

Yet Rhodes critiques prominent and concerning elements of these methods in light of Scripture: fascination with numbers, unhealthy emphasis on rapidity, minimization or dismissal of the role of trained teachers, finding the “person of peace” as a prerequisite to evangelism, obedience-based discipleship, and placement of new believers or even unbelievers in positions of spiritual leadership. While Rhodes names sources directly and identifies problems clearly, he does so without demonizing those he critiques.

Identifying and critiquing problems is one thing; proposing solutions is another. But Rhodes doesn’t disappoint. The bulk of No Shortcut to Success is a positive, biblical vision for and defense of “professionalism” in missions: devoting time and resources to acquire knowledge and skills necessary for fulfilling the missionary task well. While missionaries should care about humanitarian needs, our primary identity is ambassadors for Christ (2 Cor. 5:20). As ambassadors, our primary vocation is communication, specifically communication of the gospel message and its implications. And our communication should be clear, credible, and bold.

This has significant ramifications, especially for our commitment to deep knowledge of language and culture. The simple ability to verbalize the sentence “Jesus died for sinners” is ultimately unhelpful if we aren’t able to define the Jesus we proclaim and the essential problem of the sinners for whom he died, or explain why sin requires death. And once the message is made clear and embraced, the questions don’t stop. What do I do with my multiple wives? What if my family is taken from me? And why do we worship Father, Son, and Spirit if God is one? Beneath each one of these questions are deep worldview assumptions that take time and effort to uncover.

If you assume that missionary commitment to language and culture learning should be a given, Rhodes offers a reality check: “Too many missionaries never put in the effort to reach high levels of fluency because they overestimate how regularly God works apart from language fluency. They’ve heard one too many stories where Missionary A showed up to Unreached People B and—somehow, against all odds—God worked a miracle” (150–51).

Miracles may happen, but we shouldn’t count on them to the exclusion of ordinary means like the hard, disciplined work of deep language and culture learning.

Like Rhodes, I’ve heard this and other reasons for not investing in more “ordinary means.” For example, we shouldn’t spend time in language and culture learning when the task is so urgent, and we can work with English speakers among the target audience. Foreign missionaries shouldn’t teach the Bible to unbelievers or new converts; we should simply put them in touch with Scripture and let the Holy Spirit be their teacher. And why would we devote time to teaching local church leaders things like hermeneutics or historical theology when so many have yet to hear the gospel?

The heart of Rhodes’s proposal for a course correction is the pathway of 10 milestones he describes in chapter 8. While these milestones aren’t named explicitly in Scripture, each is necessary in light of the biblical definition of the missionary task. For example, a missionary should acquire adequate pre-field training in theology and practical skills, invest significant time in language and culture learning, communicate the gospel clearly and broadly, disciple converts, establish healthy churches, and train local leaders.

What’s striking about these milestones is how uncontroversial they would’ve been in previous generations. They were the paths pursued by missionary pioneers like William Carey, Adoniram Judson, John Paton, and Hudson Taylor. And more importantly, they derive from a robust understanding of balanced biblical priorities.

These . . . were the paths pursued by missionary pioneers like William Carey, Adoniram Judson, John Paton, and Hudson Taylor.

No Shortcut to Success repeatedly encourages us to properly understand and appreciate how God uses these ordinary means to accomplish his mission. So does Rhodes neglect or underappreciate the Holy Spirit? No. But the final chapter does offer a helpful corrective to hyper-spiritualized approaches that expect God to work primarily in eye-catching, miraculous ways.

Instead, Rhodes contends, we should expend our energy on strategies that expect God to work mainly through our normal world of relationships and abilities—abilities empowered by the Spirit and undergirded with prayer, but also acquired and cultivated through sustained, disciplined effort. That’s an important truth for all believers, no matter their vocation or location.

Brothers, We Must Be Professionals

While I could offer various points of disagreement or critique, they’d be relatively minor. I’ll strongly encourage my missionary colleagues to read No Shortcut to Success carefully. It’s a needed call to return to the ways rooted in Scripture. But it isn’t a book only for missionaries, future missionaries, or mission leaders. It’ll benefit churches and church leaders involved in sending and supporting missionaries as well.

Rhodes isn’t disagreeing with Piper. The professionalization Piper laments is an emphasis on education, skills, and guild standards that are possible without faith in Jesus. The professionalization Rhodes commends is the acquisition of knowledge and skills that missionaries must possess to do their work well while recognizing that success ultimately depends on God.

Like Rhodes, I’ve been a missionary long enough to see some fads come and go. I long for the day when the amateurization fad goes. Brothers and sisters, we must be professionals. As Rhodes argues, when it comes to cross-cultural missions, a burning heart and a Bible are not enough.

Doug Coleman has served among Muslims for more than 20 years. He contributed the chapter “The Agents of Mission: Humanity” in Theology and Practice of Mission. His doctoral dissertation examines biblical and theological issues related to Insider Movements such as the Jerusalem Council (Acts 15) and the Idol’s Temple (1 Cor. 8–10).