Elementary science textbooks depict our immune system as a battalion. At the slightest breach in defenses, we learn, white blood cells surge through the bloodstream to protect us from invaders. Such illustrations portray the immune system as elegant, even heroic, in its commitment to an ultimate good.

Closer inspection reveals the workings of this arsenal to be far more complex, sometimes even sinister. The white blood cells we seek to boost with vitamin C can lay siege to our own bodies, causing autoimmune diseases like hypothyroidism, lupus, and diabetes. White blood cells gobble fat and burrow within our blood vessels to prime us for heart attacks. In severe infection, the immune system floods the body with chemicals that compromise blood flow to our own organs. Such examples reveal that in specific circumstances, our immune system is more foe than valiant ally.

In her book Natural Causes: An Epidemic of Wellness, the Certainty of Dying, and Killing Ourselves to Live Longer, political activist Barbara Ehrenreich, who holds a PhD in immunology, argues that such cellular rebellion exposes the folly of America’s wellness craze. Her premise is fascinating and relevant. How do we justify frenzied resistance against our own mortality, when our bodies are destined to self-destruct? Unfortunately, Ehrenreich’s book is more likely to offend and confuse than challenge and inspire. Despite her background, from the first pages Ehrenreich veers away from scientific inquiry in favor of disparagement. The resulting text tears down without refining, and offers little that is honorable or lovely (1 Cor. 10:23; Phil. 4:8).

How do we justify frenzied resistance against our own mortality, when our bodies are destined to self-destruct?

Ehrenreich, an outspoken advocate for abortion, considers life “an interruption of personal nonexistence” (xv). No one should expect Christian themes in her work. However, plenty of secular books offer valuable truths written with poise and objectivity. Atul Gawande’s Being Mortal, a meticulous commentary on care for the elderly and infirmed in America, is one such excellent resource. 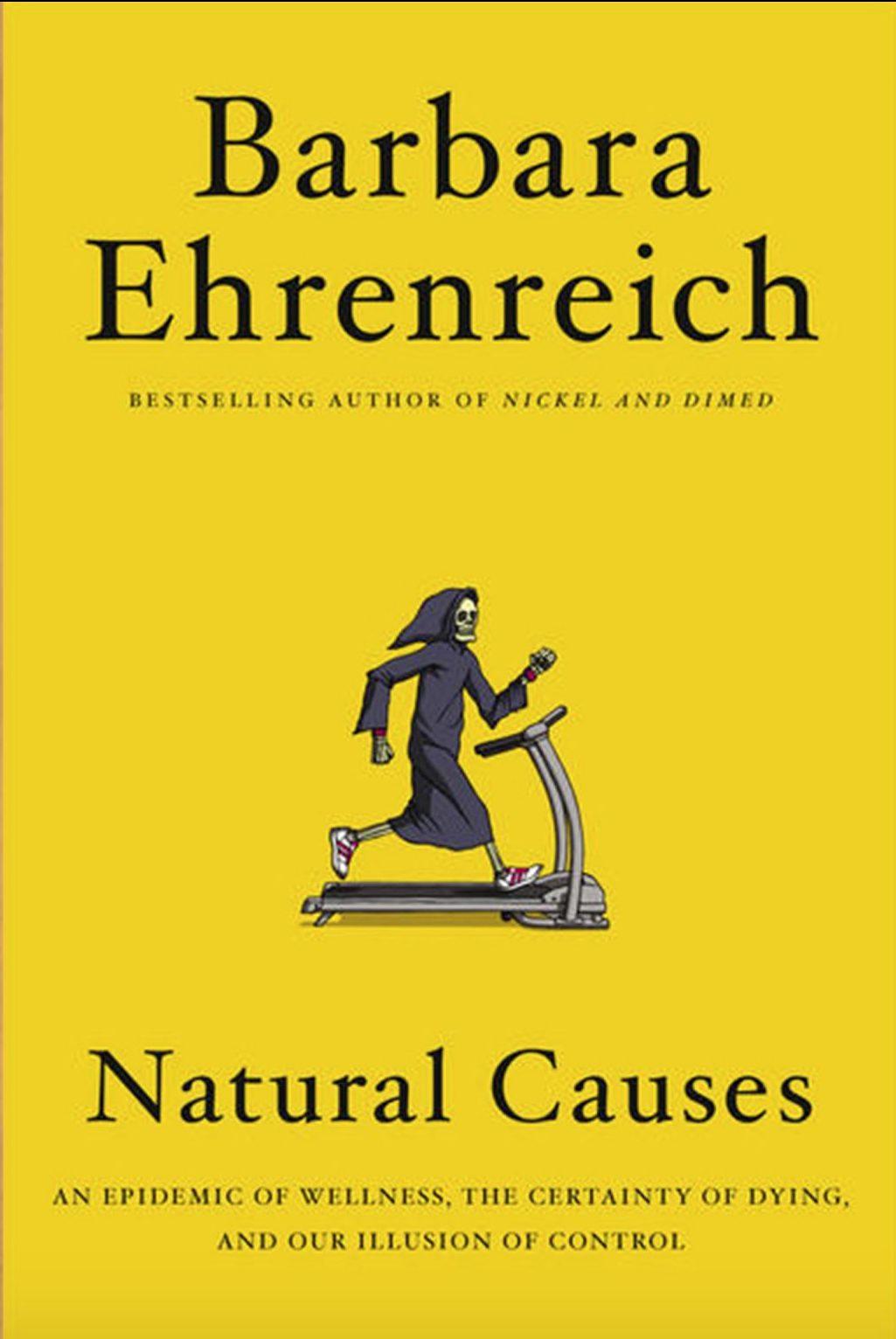 Natural Causes: An Epidemic of Wellness, the Certainty of Dying, and Killing Ourselves to Live Longer

Natural Causes: An Epidemic of Wellness, the Certainty of Dying, and Killing Ourselves to Live Longer

Natural Causes, on the other hand, reads as a rant. In chapters riddled with hyperbole, Ehrenreich demonizes health-care professionals, alternative medicine, fitness gurus, Silicon Valley, and the late Steve Jobs, to name a few subjects. She condemns the entire medical establishment as corrupt, with its practitioners promoting “unnecessary procedures for the sake of profits or simply to gratify physicians’ egos (and, in the worst case, sexual impulses)” (41). Mammograms, she writes, are “a refined sort of sadism,” and the colonoscopy a “kinky procedure” akin to “an actual sexual assault” (7). In a bizarre diatribe about “pro-menstrual propaganda,” she criticizes the “affluent and educated” for normalizing menstruation (129). Smoking cessation, according to Ehrenreich, is a “war on the working class” (101). Even those who share Ehrenreich’s political convictions will squirm when she indulges in schadenfreude about the untimely deaths of public figures who championed longevity (91–94). Page after page of Natural Causes broils with such wild and illogical expressions of contempt.

Despite her vehemence, Ehrenreich offers paltry evidence to justify her allegations. Her tone is authoritative, but she substantiates her claims with news headlines and personal blog posts, rather than peer-reviewed research. One exception is the chapter detailing the immune system, in which she reviews the scientific literature with care. This is the strongest chapter, with data sufficiently compelling to require little editorialization. The bulk of the book, however, repeatedly misrepresents opinion as fact.

Ehrenreich’s recklessness especially unsettles as she ventures into theological territory. Her disdain for monotheism is clear; she declares that “science pushed [God] into a corner and ultimately rendered him irrelevant” (200). She conflates Christianity with Gnosticism, postulating an unbiblical mind-body divide (72). She backs up her claim that “one can’t even find the concept of ‘the immortal soul’ in the Bible” (183) not with exegesis, but with a single online editorial written in 1999.

Meanwhile, throughout the book her own theology appears to crack, unable to sustain the burdens of her arguments. She struggles to cull meaning from the nihilistic and atheistic ideology she proclaims, and grasps for contributions from animism and magic mushrooms (204–205). After 200 pages spent denigrating religion, medicine, and all efforts to preserve health, she offers half-hearted reassurance that death “is not a terrifying leap into the abyss, but more like an embrace of ongoing life” (208).

Considering her graphic description of death in the preceding pages, complete with brain liquefaction and the body devolving “into a stinking pool or, what may sound worse, a morsel in a rat’s digestive system,” this conclusion offers meager consolation.

Ehrenreich’s inflammatory approach is unfortunate, because her topic raises intriguing questions. American culture chases after youth and health, with diet fads emblazoning magazine covers and anti-aging products cluttering shelves. At first glance, these preoccupations may seem honorable: as bearers of God’s image we steward his creation, including the bodies he has given us (Gen. 1:26–28; 1 Cor. 6:19–20). But when does pursuit of wellness slide toward idolatry? When does our reliance on aggressive medical treatments cross the threshold from stewardship into denial of our own mortality?

When does pursuit of wellness slide toward idolatry? When does our reliance on aggressive medical treatments cross the threshold from stewardship into denial of our own mortality?

The insurgent tendencies of the immune system remind us that bodily wellness doesn’t achieve salvation. The wages of sin is death (Rom. 5:12; 6:23), and its ill effects infiltrate our DNA, propagating through proteins and cell membranes. Death comes to all of us, whether through white blood cells run amok, or through tragic accident. In the most helpful line of her book, Ehrenreich comments, “If there is a lesson here it has to do with humility. For all our vaunted intelligence and ‘complexity,’ we are not the sole authors of our destinies or of anything else” (161).

Ehrenreich didn’t intend the wisdom inherent in her conclusion. She points to unconscious cells as authors of our destiny, to thoughtless particles that muck up the works as we catapult toward oblivion. But when we consider the failings of our own earthly bodies, as Christians we can turn to the Author of life and find hope. We can consider the intricacies of processes beyond our control, admit our limitations, and rejoice. Because even as our bodies crumble, through saving grace Christ restores the brokenness. He cups the wayward cells, the spreading tumors, and the bitterness in our hearts as he makes all things new (Phil. 3:20–21; Rev. 21:5).