It was 1999, and I was a high school sophomore when I first saw Terrence Malick’s The Thin Red Line. It was the movie that made me want to become a film critic.

I had grown up with two loves: Jesus and cinema. I was in church three times a week in Baptist churches in Oklahoma and Kansas. I was in movie theaters less often than that, but not by much.

These two loves often felt like opposing worlds. Apart from the occasional Braveheart sermon illustration or pulpit jeremiad against the worldliness of Hollywood, what did church have to do with movies? The evangelicalism of my youth tended to pit these two against each other, one sacred and one secular. 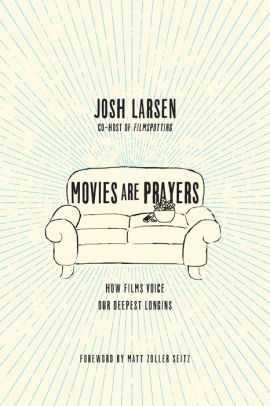 But The Thin Red Line changed things for me. It was the first time I experienced “holy moments” in a film, not necessarily because of the plot or themes, but because of the images and sound—because the fragmentary words and phrases, messy and muddled in voiceover, sounded like prayers I had prayed myself. Malick’s World War II epic was the movie that declared to me that faith and film are good, generative conversation partners.

How Are Movies Prayers?

Josh Larsen, longtime film critic (ThinkChristian) and author of the new book Movies Are Prayers: How Films Voice Our Deepest Longings, had a similar upbringing to mine. A native Midwesterner, Larsen grew up in the church and grew up loving movies. He often worshiped in church on Sunday morning and went to watch a film in the afternoon, a transition that he says “felt natural and good” (8).

In Movies Are Prayers, Larsen brings these two worlds together and expresses their natural connections beautifully. He observes how in both churches and movie theaters we “set aside our time and our space to gather in community and join our concentration . . . to apply our intellectual, emotional, and artistic prowess toward considering the world and our purpose within it” (10).

For Larsen, the church and the cinema are both places that give shape and voice to human longings. Drawing on the theology of common grace (“this notion that an agnostic artist, by God’s favor, can capture the glory of his creation”), Larsen argues that artists and filmmakers are constantly offering gestures of prayer in their art, even without knowing it or naming it as such (11). A fundamental assumption of the book is “that prayer can be an unconscious act, one guided by the Holy Spirit as much as our own script” (9), citing Romans 8:26. “Even the howl of an atheist,” he writes, “is directed at the God they don’t acknowledge” (15).

Having articulated these assumptions, Larsen spends the rest of the book exploring nine expressions of prayer often found in movies. He orders these nine “genres” of prayer along a creation-fall-redemption-restoration trajectory, starting with prayers of praise (creation), moving into prayers of yearning, lament, and anger (fall), followed by prayers of confession, reconciliation, obedience, and meditation/contemplation (redemption), and ending with prayers of joy (restoration). This brilliant structure gives the book a decidedly gospel shape.

Each chapter discusses a number of films that exemplify the genre of prayer in question: The Wizard of Oz and 2001: A Space Odyssey as prayers of yearning; The Tree of Life and Babette’s Feast as prayers of praise; the films of the Joel and Ethan Coen (“primarily Old Testament filmmakers”) as prayers of confession (89). And so forth.

These films are examined quickly, presumably so that more can be included and readers can recognize films they’ve seen. But Larsen is at his best when he takes time to drill down into one particular film. He does this brilliantly with Wes Anderson’s Rushmore at the end of the book. Over 12 pages, Larsen maps the creation-fall-redemption-restoration framework of Rushmore, an ambitious exercise I wished he had attempted with a few other films in the book.

The strength of the book is that it does both well. Many “arts and theology” books tend to emphasize one or the other. They either focus mostly on gleaning theological insights from the arts (and thus turning art into something rather utilitarian), or else they focus too much on appropriating theology for the arts, stretching for theological justifications or explanations that are neither warranted nor coherent.

Larsen’s book, however, succeeds in part because his ambition is more focused and humble. By narrowing in on prayer (admittedly still a massive topic) as his theological “lens,” he avoids the tendency of the genre toward unwieldy, all-over-the-theological-map incoherence.

Early on in Movies Are Prayers, Larsen states he wants to offer two things to readers: “a consideration of the role of prayer in the Christian life, and a way of exploring film from a theological perspective” (12). He succeeds on both fronts.

Readers will be provoked to think freshly about prayer, just as they will be led to think theologically about movies. And not just Christian readers. This is a rare Christian book I’d be eager to give my non-Christian friends. Movies are a great, natural bridge for conversations about God with the nonbelievers in our lives, and this book is a tremendous resource for fostering rich conversations about the longings films expose.

Larsen is a smart film critic, and his analysis of movies is as good as that of any critic you’ll read in The New York Times. He’s also conversant in theology and unafraid of engaging Scripture, spelling out the gospel explicitly (166) and quoting the likes of Charles Spurgeon and John Piper. The book has a devotional, personal authenticity to it that makes it readable and moving. As methodical as it is, Larsen’s writing never feels forced. It reads, rather, as the passionate pennings of a man who loves Jesus and loves movies.

One especially refreshing thing is how Larson analyzes films on the level of form/aesthetics as much as on the level of content/story/themes. In his analysis of 12 Years a Slave, for example, Larsen describes the way director Steve McQueen directs his actors to gaze at the camera as a way to disallow passivity on the part of the audience, contributing to the overall effect of the film as “a viscerally cinematic prayer of lament” (49). In the chapter on praise, Larsen cites the French New Wave as an example of how stylistic innovation alone can be an expression of praise.

In his robust engagement with artistry and form—and not just message—Larsen models something that needs to be modeled for Christian filmgoers and filmmakers alike. Too often we bypass form in a rush to efficiently communicate or understand content, missing the fact that form is crucial to the way truth is revealed and beauty is beheld. The Psalms have a particular effect because they are psalms, not epistles. It matters that God came to us as a flesh-and-blood man, not as an ethereal set of abstract concepts. The medium is the message.

In the same way, it matters that God speaks to us, and we speak to him, in styles that sometimes look less like prose and more like poetry. We don’t pray in essay form, with a thesis statement and carefully constructed supporting paragraphs. We pray from our gut as much as from our mind, offering up a montage of longings and laments, hopes and fears, reflections and requests. And movies do too.

Brett McCracken is a senior editor at The Gospel Coalition and author of Uncomfortable: The Awkward and Essential Challenge of Christian Community, Gray Matters: Navigating the Space Between Legalism and Liberty, and Hipster Christianity: When Church and Cool Collide. Brett and his wife, Kira, live in Santa Ana, California, with their son Chet. They belong to Southlands Church, where Brett serves as an elder. You can follow him on Twitter.

3 Jen Hatmaker and the Made-to-Order Gospel

4 Despair and Light from the Rubble of Beirut