In the Central Asian culture where our family used to live, hospitality was elaborate. When visiting a friend, copious amounts of extravagant food were typically offered. But regardless the quality of the meal, the event itself was also elaborate, filled with rhythms and rituals that were often expected but rarely explained. The shared table had a kind of liturgy. Only by carefully observing and repeatedly experiencing that routine could outsiders like us hope to understand what was happening and avoid a misstep—unless someone would reveal the unwritten rules.

Many aspects of the meal were assumed, including the guests’ responsibilities. Among them, guests were expected to remain in the home until they were released. The dinner, usually followed by hours of tea and conversation, was not complete until fresh fruit had been served. Only then were guests free to go. On one occasion, our unwitting family stood to leave before the watermelon was presented. And our premature standing—what the locals called a “rich person’s exit”—brought shame to our hosts.

I think our breaking of that unwritten cultural norm encapsulates much of what E. Randolph Richards, professor of biblical studies at Palm Beach Atlantic University, and Richard James, a crosscultural missionary in the Middle East, uncover in their book, Misreading Scripture with Individualist Eyes: Patronage, Honor, and Shame in the Biblical World. As they reveal, some of the most important social systems in the world and in the Bible are often assumed and left unspoken. 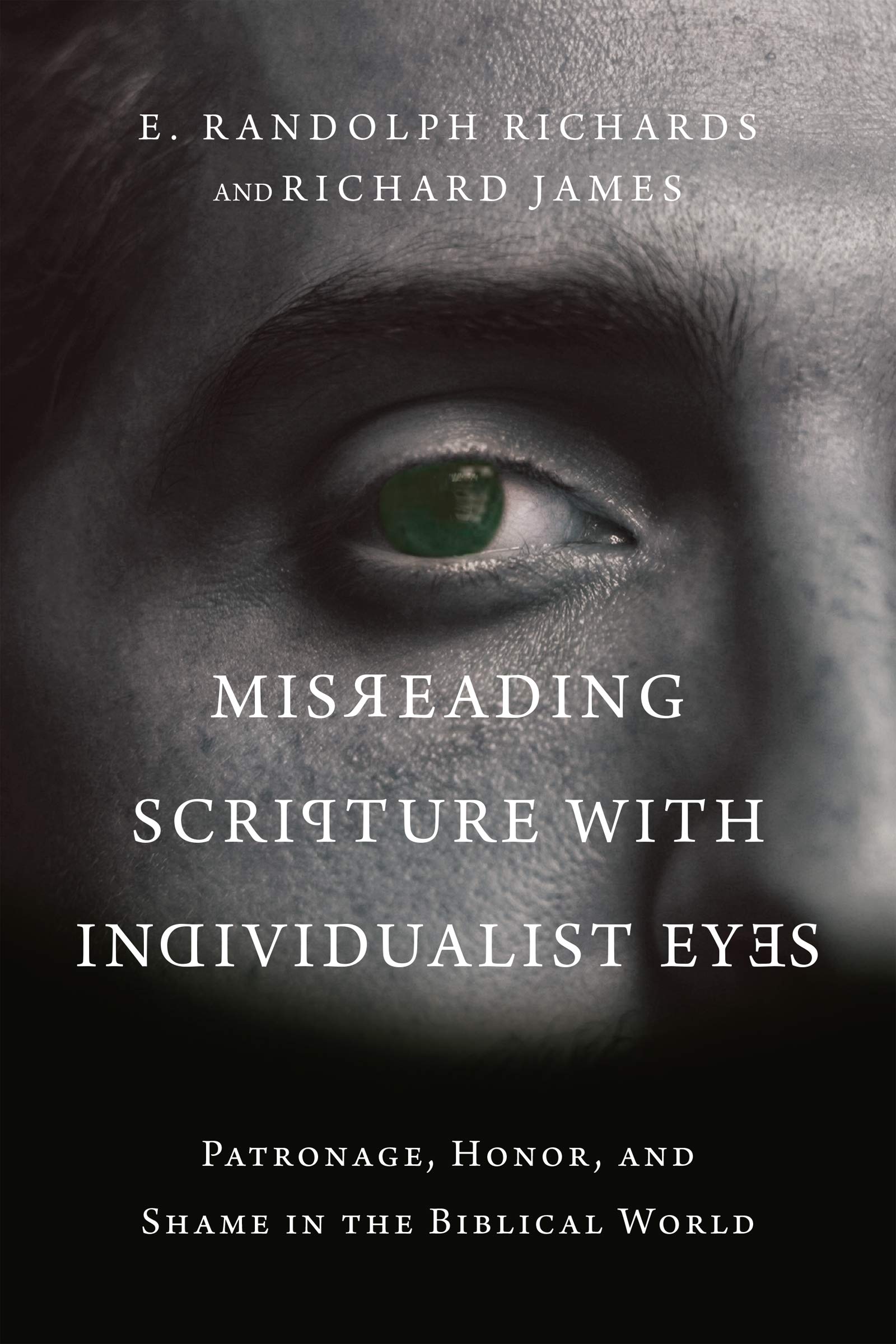 The Bible was written within collectivist cultures. When Westerners, immersed in individualism, read the Bible, it’s easy to misinterpret important elements―or miss them altogether. In any culture, the most important things usually go without being said. So to read Scripture well we benefit when we uncover the unspoken social structures and values of its world. We need to recalibrate our vision. Combining the expertise of a biblical scholar and a missionary practitioner, Misreading Scripture with Individualist Eyes is an essential guidebook to the cultural background of the Bible and how it should inform our reading.

Richards and James have a straightforward goal. They want to help us read the Bible better. But the challenge they’ve identified is that in the world of the Bible, as in any other culture, “the most important things usually go without being said.” Furthermore, the authors assert that “the Bible was written in a collectivist context by writers who were all collectivists.” In other words, those authors could assume their original readers’ understanding on certain issues.

This puts Westerners who operate from a more individualist mindset at a disadvantage when we approach the biblical text. As a culture, we also tend to struggle with implicit communication. The result? We’re not just distanced geographically and culturally from the world of the Bible; that world is easily hidden to us. And these realities lead us to sometimes misread Scripture. However, like our family leaving too early from dinner, we may not even realize what we’re missing.

Some who read this may wonder what influence individualism can really have on interpreting Scripture. But here my story about hospitality comes in handy.

A Western individual likely operates on personal preferences and personal plans. If you don’t want food, you don’t eat it. If you don’t want to wait, you leave. In fact, it wouldn’t likely occur to us to ask permission to leave in the first place. In the West, the guest is king. You do what works for you. So any rules or restrictions imposed by the host would feel like the opposite of welcoming hospitality. And what’s important to see is that those Western values are largely assumed. You don’t have to explain them because everyone understands—at least until someone from another culture visits your home.

When we read the Bible, sometimes we read our cultural assumptions into the text. We act as if the characters in the story are operating within our value system.

We should note that Richards and James aren’t avoiding that mistake by making a similar one. They’re not trying to crowbar collectivist cultural realities into Scripture. Instead, they claim that these social systems and cultural preferences are already behind the curtain of virtually every biblical text. They believe that kinship, boundaries, patronage, honor, and shame are something like the marionette strings of the biblical characters. The strings may be unseen—in the case of Scripture, they’re unwritten—yet those strings exert a powerful force in the relationships, societies, and world of the Bible.

When we read the Bible, sometimes we read our cultural assumptions into the text. We act as if the characters in the story are operating within our value system.

Throughout, Richards and James reveal cultural values that are often assumed in collectivist cultures yet for the Western reader might seem counterintuitive (or even unbiblical). For instance, they show that identity is bound up in family. Gifts always have strings attached. Reciprocity is expected. Boasting is good for the group. Gratitude is expressed through honor and loyalty.

In the case of our hospitality blunder, almost all those cultural values were disrupted by our hurried departure. That’s what made it so offensive. Furthermore, collectivist values are often expressed most powerfully in the home. While family is an important institution in the West, kinship and family don’t determine one’s life and livelihood here in the same way as in collectivist cultures. Because of this, we can easily overlook features of the biblical text pertaining to family dynamics, domestic disputes, shared meals, kinship structures, and assumed responsibilities in the home.

Take the relationship among Jacob’s sons for example. As the younger brother, Joseph wasn’t merely given a colorful coat in a show of favoritism. He remained home while his older brothers worked in the field. He was even sent out by his father to instruct them. While it’s not explicitly laid out in the text, this would’ve conveyed an unmistakable message to the other brothers in that society: Joseph was the heir.

Or consider another group of brothers. In Jesus’s final words on the cross, he asked for John—his disciple—to care for his mother, Mary. This responsibility would’ve typically fallen to Jesus’s half-brothers (assuming their father was dead). But as the firstborn, Jesus upended expectations and delegated that role to John, signifying in no small way that his followers’ loyalty and kinship is thicker than blood. As Richards and James point out, the Bible doesn’t suggest that the church should act like family. The church is family.

The Bible doesn’t suggest that the church should act like family. The church is family.

But of course, redrawing boundaries and family loyalties cuts against the cultural values of collectivist societies that wish to exert familial and tribal pressures against new believers. Here, the authors helpfully acknowledge that collectivism doesn’t solve the problem; it can actually exacerbate it. In other words, this book doesn’t present collectivism as a panacea. Instead, it shows how learning more about its relational structures, thought patterns, and cultural assumptions can help us to better understand the radical values of our covenant community.

In a way, through their crosscultural experience and biblical expertise, Richards and James are like the cultural insiders who help explain the rules. They keep you from making cultural faux pas at the dinner table. They advise you ahead of time about assumptions and unspoken expectations. As such, their book is a great service to the church.

But I want to close with a word of caution. While I love studying culture and Bible backgrounds, there’s always a slight danger if we think we need something outside the Bible to understand what’s in the Bible. Or, in this case, that culturally assumed and unwritten rules are the key to understanding what’s actually written. But I don’t think the authors convey that idea. Instead, they regularly point us to what’s actually in the text—but what we may not have seen before.

That’s perhaps the simplest lesson in interpreting the Bible. While understanding Ancient Near Eastern culture can be helpful, it’s no substitute for regularly returning to the Bible. To keep reading and rereading. To slow down and see what is there. Just like the best way to learn a culture is to immerse yourself in it, the best way to learn the Bible is regular repetition in the Word—repeated feasting at the table. As we keep coming back to Scripture, as we keep carefully observing and patiently experiencing the liturgy of that wonderful meal, we learn to wait for the watermelon.