The Luther marathon of 2017 is behind us. The long-anticipated 500th anniversary of the beginning of the Reformation still looms large, however, over the reading lists of many of us. The surfeit of interpretations about Martin Luther’s significance in film, print, and other media will need a long digestive process before we fully assess whose images of Luther are most accurate and instructive. Among those competing for North American attention is Eric Metaxas’s new biography, Martin Luther: The Man Who Rediscovered God and Changed the World, an entertaining telling of Luther’s story.

Metaxas’s engaging style masks the ways in which he incorporates Luther’s narrative into his own contemporary North American milieu. That means readers will enjoy this book even when it diverges from 16th-century realities and strays into social and religious commentary coming out of, and speaking to, our own world. All historians, of course, face that temptation and pose that danger for readers, but Metaxas’s skill at telling the story too often cloaks the detours that obscure what Luther’s actual situation and genuine concerns were.

The book is not the product of original research; instead, the author takes mostly secondary sources, including recent biographies, and gleans their good quotations and retells their stories with Metaxas’s own inimitable grace.

As Metaxas struggles with the challenge of bridging the gap between 21st-century perceptions and 16th-century realities, we note both historical sensitivity and failed attempts to connect the two distinct eras. Certainly, Metaxas has some feel for the period and for Luther that offers good insights. He wrestles with Luther’s personality and captures a part of the volatile emotions that accompanied Luther on his spiritual journey. The reformer’s lows and highs may well have strengthened his insights into the psalmists’ or Paul’s view of what Luther labeled “law and gospel”—the weight of the broken relationship with God and his promise of restored relationship in Christ. Metaxas compares this struggle to 21st-century depression (e.g., 28–29), but literature on medieval melancholy and reports of contemporaries who struggled with this not-uncommon ailment of the period could’ve strengthened his argument. 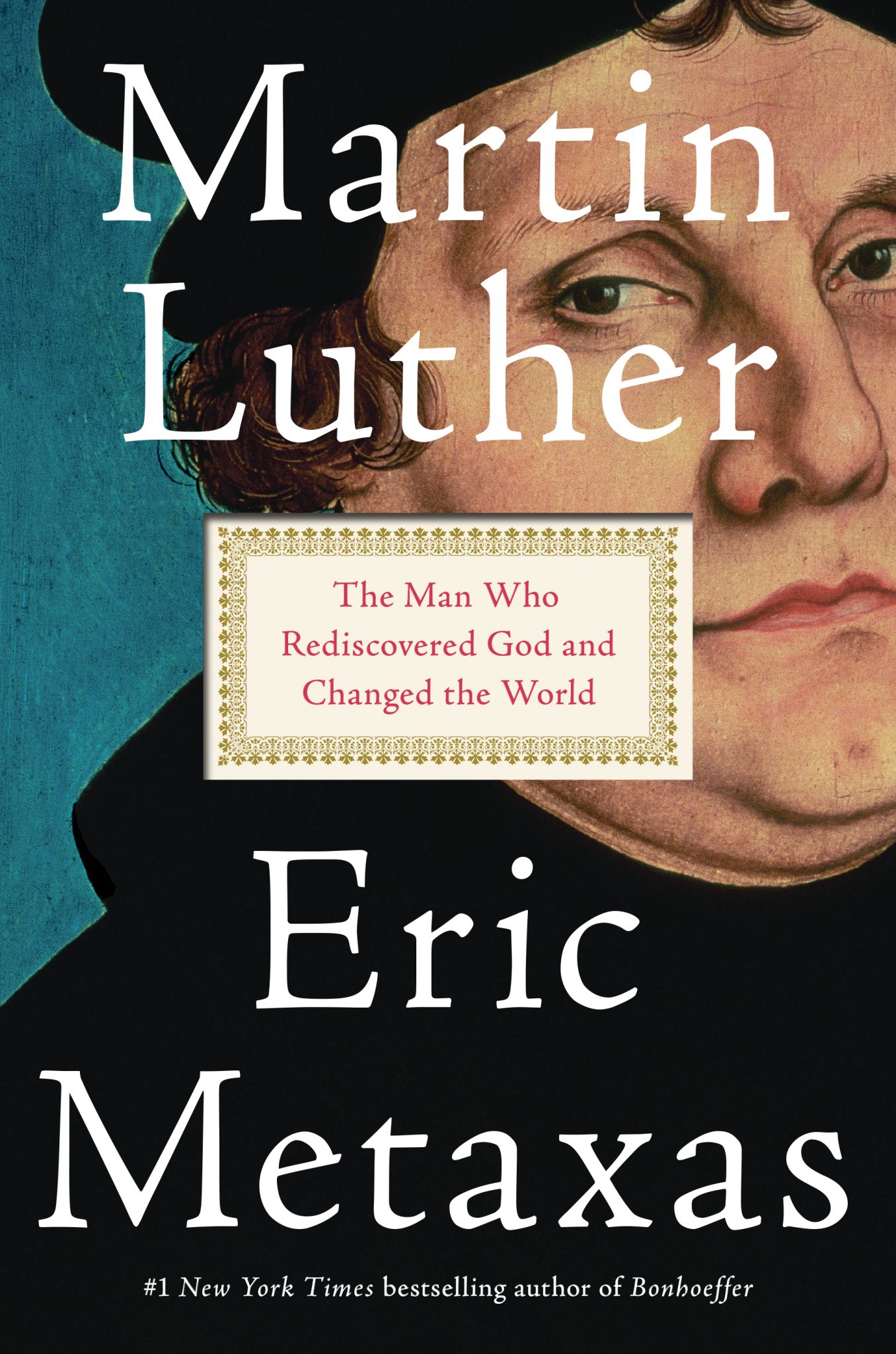 Martin Luther: The Man Who Rediscovered God and Changed the World

Martin Luther: The Man Who Rediscovered God and Changed the World

On All Hallow’s Eve in 1517, a young monk named Martin Luther posted a document he hoped would spark an academic debate, but that instead ignited a conflagration that would forever destroy the world he knew. Five hundred years after Luther’s now-famous Ninety-five Theses appeared, Eric Metaxas, biographer of the bestselling Bonhoeffer: Pastor, Martyr, Prophet, Spy and Amazing Grace: William Wilberforce and the Heroic Campaign to End Slavery, paints a startling portrait of the wild figure whose adamantine faith cracked the edifice of Western Christendom.

On the theological side, Metaxas works hard to outline Luther’s sacramental theology but fails to properly explain his belief that God’s promised forgiveness in Christ is central to his view of baptism and the Lord’s Supper, as well as absolution. Luther was convinced that the promise of the words accompanying the elements is God’s instrument, effective in establishing the reality of his chosen people’s righteousness in his sight. Metaxas erroneously attributes this power to faith, rather than the power of God’s Word, which creates this trust in Christ (370–73).

Alongside the content of Luther’s theology, his method of approaching Scripture must always be considered. Luther’s critique of allegorical interpretation of Scripture went far beyond what is here described as biblical interpretation’s being “hopelessly mired in an old and hidebound fourfold academic approach that must have been mind-numbing and depressing to someone like Luther” (54). Luther rejected the fourfold exegetical method not because it was boring, but because of his knowledge of linguistic theory and his understanding of God as a God of history, who is interested in its details.

The book recognizes that not only Luther’s theological insights but also his “all-important pastoral heart” led to his success: “[H]e was deeply concerned not merely with being right but with how what one said affected the simple faithful.” For that reason Luther opposed the rapid pace of reform introduced in Wittenberg by his colleague Andreas Karlstadt while he was at the Wartburg (281). But the account of Luther’s clash with Erasmus over the bondage of the human will fails to recognize that Luther’s concern was, above all, to secure assurance and consolation for the despairing on the basis of God’s disposition and decision alone (356–69).

In 2017 much was made of Luther’s concept of the Christian’s freedom, and one author after another fell into the trap of gliding over Luther’s profound insights into the liberating power of Christ’s death and resurrection to break the bonds of sin and free us to be bound to serve our neighbor. As much as Metaxas celebrates Luther’s contribution to modern concepts of freedom, he rightly recognizes that Luther’s appeal to conscience at Worms in 1521 was

That’s gloriously true, but it’s dubious that Luther was “asserting the modern idea of freedom of religion and freedom of conscience for the first time in history” (221).

Luther can’t appear on the stage of history as a one-man drama, and Metaxas provides nuanced portrayals of leading figures in this drama—among them the complex personality of Archbishop Albrecht of Mainz (who, as Metaxas shows, was much more than a mere purveyor of indulgences) and his dilemma of having to pay off debts incurred in acquiring ecclesiastical office (112–13). Metaxas’s estimate of Thomas Müntzer hits the mark as he paraphrases the radical spiritualist’s sermon to Elector Johann of Saxony: “Slaughter with your swords those who disagree with you, or you yourselves will be slaughtered.” Müntzer didn’t precisely understand himself that way, but the princes did act in accordance with Metaxas’s version of the speech.

Metaxas also enlivens his story by using marginally relevant stories, such as details from the life of Pope Leo X and his pet elephant (87–92) or of Anna Laminit, an Augsburg ascetic who fraudulently claimed to have subsisted only on Holy Communion for 14 years, whom Luther mentioned once after a visit in 1518 (63–66). Such detours provide a flavor of the times and add to the drama. It would’ve been more helpful to have details from the work of scholars such as Heiko Oberman or Bernd Hamm, whose research findings illuminate the background of Luther’s thinking and the piety that shaped his theological development. Details from their work would give the reader a better grasp on how Luther came to the conclusions he did and why his call for reform took its particular shape.

An occasional error slips into such an account inevitably, but some historically-informed editor should’ve caught that “an electoral capital”—which Wittenberg was not, but only one of several residences from which the government of Frederick the Wise operated—“must have a university” since several German universities were not in such “capitals” (73). The papal curia was not referred to as “the Vatican” (e.g., 133, 157, 369) in the 16th century. Christian II was king of Denmark, not of Sweden, although Sweden was part of his domains at the beginning of his reign (309). Dating the appearance of Erasmus’s Diatribe on the freedom of the will to September 1, 1525, and then talking about Luther’s failure to respond earlier that year misses the important point that Luther waited 16 months—from September 1524 to December 1525—to publish his response in On Bound Choice (360–69). Tyndale did not translate the entire Bible into English (413).

Throughout the book, Metaxas reflects his own piety, which both values and is troubled by the pluralism that he attributes in part to Luther. He ends the book with something of a soliloquy that celebrates Luther’s role in producing a “free market of ideas” that led to the pluralistic world we live in. He ends with questions: “When does liberty become license and oppression? When does freedom bleed across the invisible border into forced ideology? When does pluralism become its own oppressive monolithic ideology?”

Metaxas concludes by pointing out:

[T]his great dance between truth and freedom continues as it has done and as it must and will. It may sometimes seem more a battle than a dance; nonetheless, in the end these two parts of a larger whole keep going round and round, in the process circling inexorably toward that happy day when the two will be one—and not just in the mind of God but in history too. Maranatha. (446)

Had I read this section first, I might’ve been even more suspicious of how much Luther and Metaxas were being revealed in the pages preceding. Every biography tells us something of its author as well as its subject, and that is the case here too.

While I certainly believe that church historians should point out what their historical subjects may have to say to contemporary audiences, I don’t think it is helpful to force them into conversations in which their ideas don’t pertain. The last thing Luther sought was a free market of ideas. He sought to teach the church and would’ve taken measures to prevent, not foster, this kind of free market of ideas. And I don’t think Metaxas is advocating the kind of biblically disciplined public discourse that Luther wanted to foster. For Luther, truth and the modern Western concept of freedom just wasn’t on the radar. His freedom was freedom from sin, death, and the Devil which bound us. That has a lot say to us today, but not about the great dance between truth and freedom.

Church history serves the church best when authors combat the temptation to place history in the framework of their own dogmas. Some reflection of the author’s values is inevitable, and Leopold von Ranke’s ideal of “telling it precisely as it took place” is illusionary. But the discipline of the documents—faithfulness to the original sources—distinguishes good church history from church history used for one’s own purposes, whether noble or otherwise.

As delightful as I find Metaxas’s prose at most points, and as sympathetic as I am to many elements of his American rendition of Christianity, other biographies provide readers more accurate and helpful accounts of the reformer’s life.