For me as a resident of Central Asia, the many wild events of Western society feel distant. The evidence of cultural opposition there can feel unrelated to the kind of opposition we face here.

But the last year has debunked that perception.

A local friend faces this question: can he pursue his doctoral studies in psychiatry without lying about what he believes about the human psyche and sin? Fellow believers express uncertainty over whether the Bible speaks to the particular challenges they face in parenting or coping with trauma. A pastor friend is accused of spiritual abuse because he warned someone about being in sin. I’ve learned a relative of mine is wrestling with sexual identity. The rise of the modern self is globally pervasive, even if uneven in its effects. 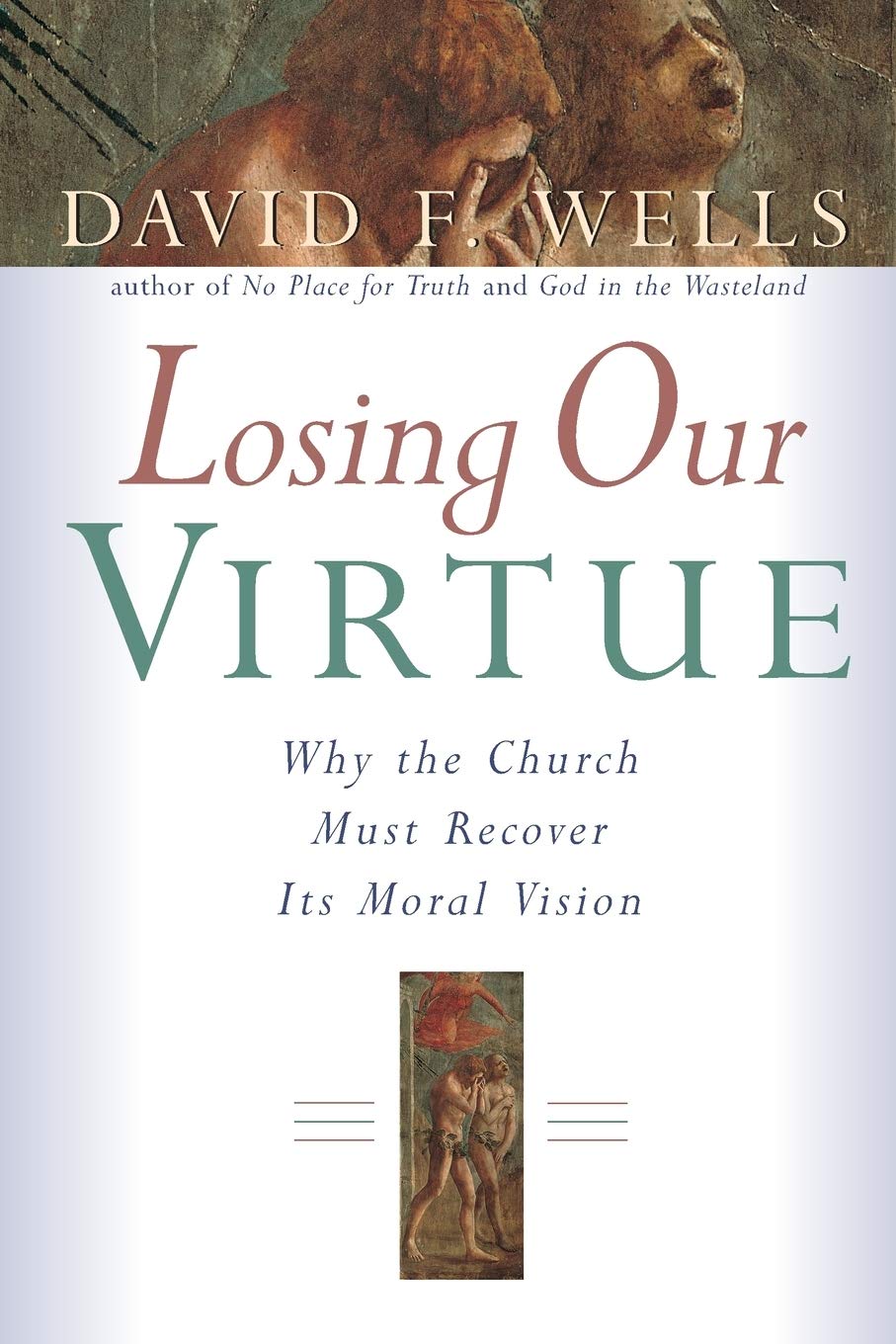 Losing Our Virtue: Why the Church Must Recover Its Moral Vision

Losing Our Virtue: Why the Church Must Recover Its Moral Vision

In Losing Our Virtue: Why the Church Must Recover Its Moral Vision, theologian David Wells argues that the church is in danger of losing its moral authority to speak to a culture whose moral fabric is torn.

Although much of the church has enjoyed success and growth over the past years, Wells laments a “hollowing out of evangelical conviction, a loss of the biblical word in its authoritative function, and an erosion of character to the point that today, no discernible ethical differences are evident in behavior when those claiming to have been reborn and secularists are compared.” The assurance of the Good News of the gospel has been traded for mere good feelings, truth has given way to perception, and morality has slid into personal preference.

Can the church still speak effectively to a culture that has become morally unraveled? Wells believes it can. In fact, says Wells, no time in this century has been more opportune for the Christian faith—if the church can muster the courage to regain its moral weight and become a missionary of truth once more to a foundering world.

Reading David Wells’s Losing Our Virtue: Why the Church Must Recover Its Moral Vision was painful. As I read his cultural analysis of the West in the late 1990s, I looked up and realized that decade has come to full flower.

The basic argument is this: as theology is considered irrelevant to the practical Christian life (see No Place for Truth), that has led to a diminished, “weightless” view of God (see God in the Wasteland). And when our understanding of God diminishes, we are less able to understand the human condition. In particular, as the holiness of God decreases in our vision, so does the gravity of our sin. “As God vanishes, so too does sin” (183).

The diminishing of God leaves people without external, objective morality. And as moral standards go, so does a clear sense of guilt over wrongdoing. In its place has arisen shame and anxiety—internal, subjective indicators of wellbeing.

Wells—senior distinguished professor at Gordon-Conwell Theological Seminary—clarifies that the contrast is not so much between guilt and shame, but between external and internal standards determining “good” (which helps distinguish this “new” shame from the honor-shame dynamics of Eastern cultures, such as Jesus’s). The problem isn’t the experience of shame—it’s that we’ve been taught to determine whether something is shameful based simply on how we feel about it. Such shame is entirely subjective, unmoored to any external standard.

The underlying cancer contributing to this moral subjectivism is the loss of external moral authority. The problem with the psychologized self isn’t that people are feeling shame—it’s that they’re ashamed about the wrong things.

Good shame, like good guilt, drives us to the holy activity of repentance.

Tied to the rise of subjective shame is the dominance of therapy as key to the good life. Satisfaction with and happiness toward yourself are the new metrics for health. However, “this is often done under the language of enhancing self, of enabling it to transcend itself, rather than that of limiting itself through moral obligation, service, self-sacrifice, and commitment to others. Self technique thus becomes the new moral nurturing” (70).

It’s great that counseling is losing its stigma. But why is indefinitely “having a therapist” a sign of maturity? Trauma specialists or psychiatrists may have unique insight into certain aspects of a particular hardship. But why are those professionals better (or exclusively) suited to speak to the life of a suffering Christian than a fellow church member or pastor?

These trajectories are related because they are all committed to and driven by the belief that internal tranquility is a person’s greatest need. Health and even morality are determined by what I think is good for me.

Underlying Condition: How Serious Is Sin?

This is the underlying problem: when God is minimized, the individual’s interior life rises to take his place.

So, how far has the church indulged in this pattern?

Consider Wells’s depiction of Christian piety informed by our modernist culture: it begins with the psychological discomfort of sin, rather than its effect on our standing before God; addresses our immediate sense of sin rather than its eternal substance; focuses on gaining power rather than learning truth; promises access to God through emotional surges rather than believing the Word and trusting the work of the Son.

Diminishing sin, Wells argues, is downstream from downplaying doctrine and divine holiness. That’s certainly the logical progression; in practice, though, it seems to often flow in the other direction. The fear that people won’t like Christianity if they’re described so critically by it seems to be the practical pressure that leads Christians and churches to downplay sin. And so, in order to get people to come hear the gospel, we downplay the problem, which leads to neglecting the holiness of the God our sin offends, which makes us question what doctrine had to do with it in the first place.

Regardless of the chronological sequence, Wells’s jeremiad is relevant for our day. Beware how you speak about humanity and the problem of sin, lest you destroy the credibility of the very gospel you love.

Beware how you speak about humanity and the problem of sin, lest you destroy the credibility of the very gospel you love.

As I write, it’s the time of year when many denominations release their statistics of attendance and baptisms. As has been the case for decades, the American numbers will be going down. It’s worth asking whether ungodly anxiety over our diminishing numbers of attendance or converts means “we have become so grateful for a convert, any convert, that we do not inquire closely as to whether it is the gospel that has been believed” (41).

How many “yeses” have we taken as evidence of God’s saving work, without clarifying what that person thought they were saying yes to? How many people have been affirmed as members in good standing of gospel-preaching churches, who cannot articulate that same gospel? How have we undermined the gospel we love by telling people well-meaning lies about what their biggest needs are? How much of the confusion, division, and conflict churches have endured under the strain of pandemic, political turmoil, and racial strife is simply God exposing shoddy discipleship? How many Christians have had their sanctification hobbled by churches afraid to confront sin straightforwardly and regularly?

My wife and I had been married for about two years when we moved to America for seminary. One of the things she noted was that the church we began to attend talked about sin—often. The preacher described it. People regularly confessed it, or asked others to diagnose their behavior as sinful or not.

And over time, we began to learn from that, too. Our sinfulness became more salient to us in our day-to-day lives, not just in relation to our ultimate salvation. We started to confess sin to each other, and ask for forgiveness more easily. We began to learn how to navigate our disagreements more charitably. Whereas I’d have said we were doing well in our marriage before, it now felt like the difference between trudging through mud and running on a sidewalk.

What was the difference? What helped strengthen our marriage in practical, specific ways? Living in a community that treated sin seriously.

As is often the case with sin, the effects are complex. But the solution—or at least the start of the solution—is, though costly, quite simple. The fear of the Lord is the beginning of wisdom.