Winston Churchill once quipped, “In wartime, truth is so precious that she should always be attended by a bodyguard of lies.”

It’s a humorous line. And, in a war, accurate. In political strategy, a useful tactic. But for Christians, who actually want the truth to be known by all, the cloud of confusion thrown up by false rumors, almost-truths, and fake news is toxic.

The lies that surround the truth of the gospel aren’t put there by God, who cannot lie (Heb. 6:18; Num. 23:19), but by the father of lies, who hates the truth and all who love him. 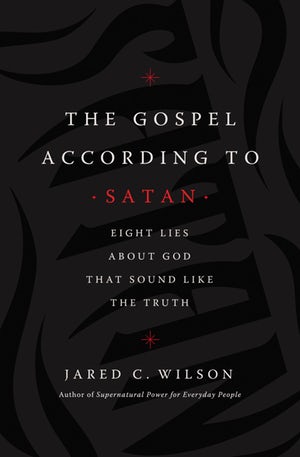 The Gospel According to Satan

The Gospel According to Satan

Some lies are repeated so often they seem to be common sense. That’s why lies about God are so dangerous. The Gospel According to Satan examines eight lies the enemy wants us to believe and provides eight lines of counterattack against them. The lies include:

Jared C. Wilson reveals why these lies appeal to us, shows how they harm us, and provides ways to counteract them. We can renounce Satan’s counterfeit gospel, but first we must see it for what it is.

In The Gospel According to Satan: Eight Lies About God That Sound Like the Truth, Jared Wilson—assistant professor of pastoral ministry at Spurgeon College, author in residence of Midwestern Seminary, and general editor of For the Church—sets out to expose eight lies he sees as increasingly plausible to the modern mind.

Even non-Christians know it’s a bad idea to believe the Devil’s lies. The trouble is spotting them. As Wilson writes, “The lies we believe today that erode our dependence on God and discredit our belief in the good news of his Son Jesus are not blatant. They are subtle. They make promises. They seem plausible” (xix). We need help—we need practice spotting his lies—because they often seem good.

Satan’s most effective activities against God’s people aren’t physical assaults or explicitly hateful attacks on Christianity. Rather, they appear respectable. And they often come from the mouths of people who appear respectable, earnest—all the while unaware of whose agenda they promote.

There are many different versions of the Devil’s lies we could decry. Wilson’s eight range from generic worldly thinking to denials of specific doctrines. The lies he addresses are (1) God just wants you to be happy; (2) you only live once; (3) you need to live your truth; (4) your feelings are reality; (5) your life is what you make it (a sort of “do what you can to get what you can, can what you get” kind of idea); (6) you need to let go and let God; (7) the cross is not about wrath; and (8) God helps those who help themselves. Each of them has a seed of truth. Even some of the headings above (Wilson’s chapter titles) are technically true. For example, it is appointed for man to only live once, and then to die (Heb. 9:27).

But Wilson addresses how these ideas are used and abused to make to distrust God and dismiss the clear teaching of Scripture. All of these lies are active and dangerous. All can be and are corrected by the Bible. To that end, this book is useful. Perhaps especially for the college student caught up in the heat of new and strange ideas, Wilson shows how simply the truth can be defended against lies that often feel overwhelmingly persuasive.

In the process of exposing the falseness and empty promises of such lies, Wilson models that the best way to fight against the lies is to know and love the Truth.

The content of this book is good and clear. There are, however, two structural aspects that, if not confusing, might distract readers. First, Wilson spends little time addressing a biblical view of the Devil himself. In the conclusion, he explains this is in response to how easily Christians can obsess over the Devil in unhealthy ways. Moreover, he elaborates, “I am convinced the best way to stay alert is to focus not so much on the Devil’s being but on his doing” (181). That’s a clarifying and instructive comment. I wish it had been made clear at the start.

Second, I was left asking, why these eight lies? Surely there are many more. Are these the most significant? If so, why? Or are these all connected to a larger worldview issues within our cultural moment? The lack of a clear common thread among the eight leave the book feeling disconnected in its parts, though edifying in its whole.

In a day when we often confuse earnestness for honesty, ‘authenticity’ for reliability, it’s good for us to build up our confidence in God’s Word.

Wilson is a sharp writer. His words and paragraphs go down easy, seasoned with quick wit and incisive imagery. I’m thankful for his work in exposing the Enemy’s strategy in a clear and edifying manner. In a day when we often confuse earnestness for honesty, “authenticity” for reliability, it’s good for us to build up our confidence in God’s Word. Praise him for writers like Wilson who invest their energies in leading others to do just that.