Everywhere we turn, we’re confronted with politics. Political ads on our phones and televisions. Campaign signs on billboards as we commute to work. And politics dominate not only the news but also our neighborhoods, with flags, yard signs, and bumper stickers marking out political divides. As annoying as some of us might find all of that, the permeation of politics should remind us that our lives are inescapably political. And in her book, The Liturgy of Politics: Spiritual Formation for the Sake of Neighbor, Kaitlyn Schiess confronts readers with precisely this message by exposing just how formative politics is on our souls.

A staff writer at Christ and Pop Culture and graduate of Liberty University, Schiess penned a notable New York Times op-ed addressing the recent scandal involving the school’s former president, Jerry Falwell Jr. In this book, Schiess writes about politics as a lifelong evangelical. And she speaks to a generation of young evangelicals who have grown disillusioned by the political engagement of their parents and grandparents and are “desperate for an alternative” (20).

The most helpful aspect of Schiess’s exposition is the power of politics. Drawing on James K. A. Smith and others, she demonstrates the incredible pull of politics over our lives and the way its liturgies—“the embodied habits, practices, and corporate pedagogies we participate in”—shape more of us than how we vote (12). Speaking of this gravitational pull, Schiess writes, “Political values don’t stay political; they become ultimate (13).

Following Augustine, Schiess argues that we’re primarily loving creatures. And though our loves and affections are meant to be aimed godward, politics (like religion) comes with its own liturgy designed to capture our attentions, shape our affections, and inflame our passions. That is why “fear” is the primary language of politics (33). To win our support, to raise money, to drive us to the polls, political narratives clamor to show us what to fear and love.

And this is the goal of Schiess’s project. Rather than allowing ourselves to fall prey to demagoguery and fearmongering, God’s people must engage the realm of politics with much greater awareness and discernment. Not only that, but to counteract the formative power of politics, we desperately need to establish and embrace “counterformative practices” to combat its pull on our lives (12). 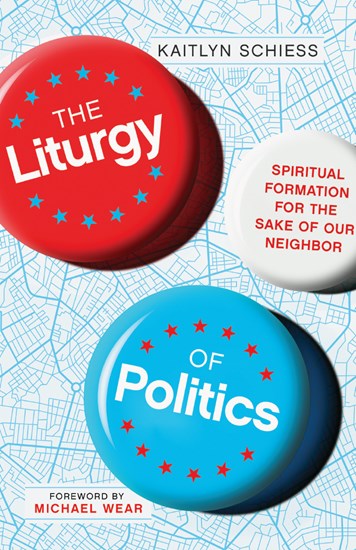 The Liturgy of Politics: Spiritual Formation for the Sake of Neighbor

The Liturgy of Politics: Spiritual Formation for the Sake of Neighbor

In The Liturgy of Politics, Schiess shows that the church’s politics are shaped by its habits and practices even when it’s unaware of them. Schiess insists that the way out of our political morass is first to recognize the formative power of the political forces all around us, and then to recover historic Christian practices that shape us according to the truth of the gospel.

One of the benefits of reading this book is that Schiess actually grapples with the meaning of Jesus’s kingship for Christian political engagement. For Schiess, the local church is the outpost of Christ’s kingdom on earth. Its rhythms, liturgies, worship, and service are the core elements by which Christians are formed to represent Christ in the world.

Despite my appreciation, at certain points the work is hindered by caricature and condescension. Schiess not only indicates her frustration with the nature of political engagement she witnessed in the generations of religious conservatives before hers, but at many points she repudiates those same believers while overstating her case or painting with a broad brush. The third chapter—where she addresses the four “political gospels” of prosperity, patriotism, security, and supremacy—provides a good example.

Each of these gospels, in her estimation, represents a widespread ailment of the white American church. Her critique of each is intended as a corrective of white Christians, some of which is needed and substantially on target. Schiess offers, though, such an expansive critique of the prosperity gospel that she implies anyone who asserts that hard work plays a role in believer’s life has allowed the American dream to supplant orthodoxy. And in the case of the “patriotic” gospel, Scheiss affirms the value of Christians loving their nation but finds room only to criticize or exaggerate how Christians demonstrate such allegiance or appreciation. Are there pulpits in America heralding the arrival of “a new heaven and new earth that look like cosmic victims of America’s myth of manifest destiny” (47)? Perhaps. Is this a controlling narrative among evangelicals? Hardly. All of this to say nothing of her assertion that the religious imaginations of white Christians in America are necessarily “corrupted by a legacy of slavery and racism” (53).

Perhaps the clearest example of Scheiss’s lack of balance is her treatment of the Religious Right. While there is ample room to criticize the relationship between religious conservatives and the Republican Party, Schiess introduces the Religious Right through the lens of the “abortion myth”—a view that argues it wasn’t Roe v. Wade that galvanized these conservatives to political action, but opposition to school integration—and then repeatedly implies that supporters of the movement were either knowingly propping up racism or duped.

While contesting the origin of the Religious Right is certainly fair game, to entirely dismiss the activism of multiple generations of social conservatives as a fool’s errand rooted in bigotry and idolatry not only borders on slander, but ignores mountains of evidence to the contrary (6–7). It’s no secret that religious conservatives have too often been taken advantage of by political actors, and that some believers were drawn into politics for less-than-laudable reasons. But to vilify the entire movement is to ignore, to cite but one example, the decades of hard-fought gains won by pro-life advocates across the nation—a group composed of faithful and unknown women who passionately believe the law should uphold the dignity of the unborn.

I’m not unsympathetic to Schiess’s concerns. Her work is aimed at young Christians turned off to Republican politics after watching certain evangelical leaders excuse grave examples of speech and conduct that called into question Donald Trump’s moral fitness for office ahead of the 2016 election. But when Schiess responds to Trump’s election with a sweeping indictment of evangelicals for their “idolatrous” alliance with the Republican Party, she offers no serious accounting as to why many religious voters would support the party out of principle rather than naïvete or political expediency. Where evangelical Republican voters make an excellent foil in Schiess’s work, she neglects the reality that the same temptations and pitfalls that plague conservatives who choose the GOP as a vehicle for their politics also plague Christians who choose the Democratic Party.

Because Schiess frequently wields a sledgehammer instead of a scalpel, those who may benefit from her writing the most are instead the least likely to read it to completion.

And yet despite its imperfections, The Liturgy of Politics delivers an important critique of the American church that summons evangelicals to more careful political engagement.