American society is, more than ever, seeking out a naked public square. Even while paying lip service to notions of rich diversity concerning our many faith traditions, the overriding message is clear: keep them to yourselves. The goal, it seems, is to create a culture in which everyone suppresses his or her most sincerely held beliefs in order to participate in public life from “neutral” ground.

Not only is this impossible, but, as Bruce Ashford and Chris Pappalardo contend, it’s completely undesirable.

Ashford (provost and professor at Southeastern Baptist Theological Seminary in Wake Forest, North Carolina) and Pappalardo (lead researcher and writer at The Summit Church in Raleigh-Durham, North Carolina) wrote One Nation Under God: A Christian Hope for American Politics to demonstrate why Christians ought to engage in politics and public life.

The book offers a new vision for the politically disillusioned and a helpful corrective to those expecting political achievement to usher in the kingdom of God. While not a full-length treatise, One Nation Under God is an excellent primer for Christians concerning political engagement.

The purpose of One Nation Under God is to guide believers to “rightly relate their Christianity to politics and public life” (2). Ashford and Pappalardo accomplish this goal by constructing an impressive theological-philosophical approach to political engagement and applying this framework to the issues of our time.

The framework is set forth in the first six chapters and may be summarized in three parts. 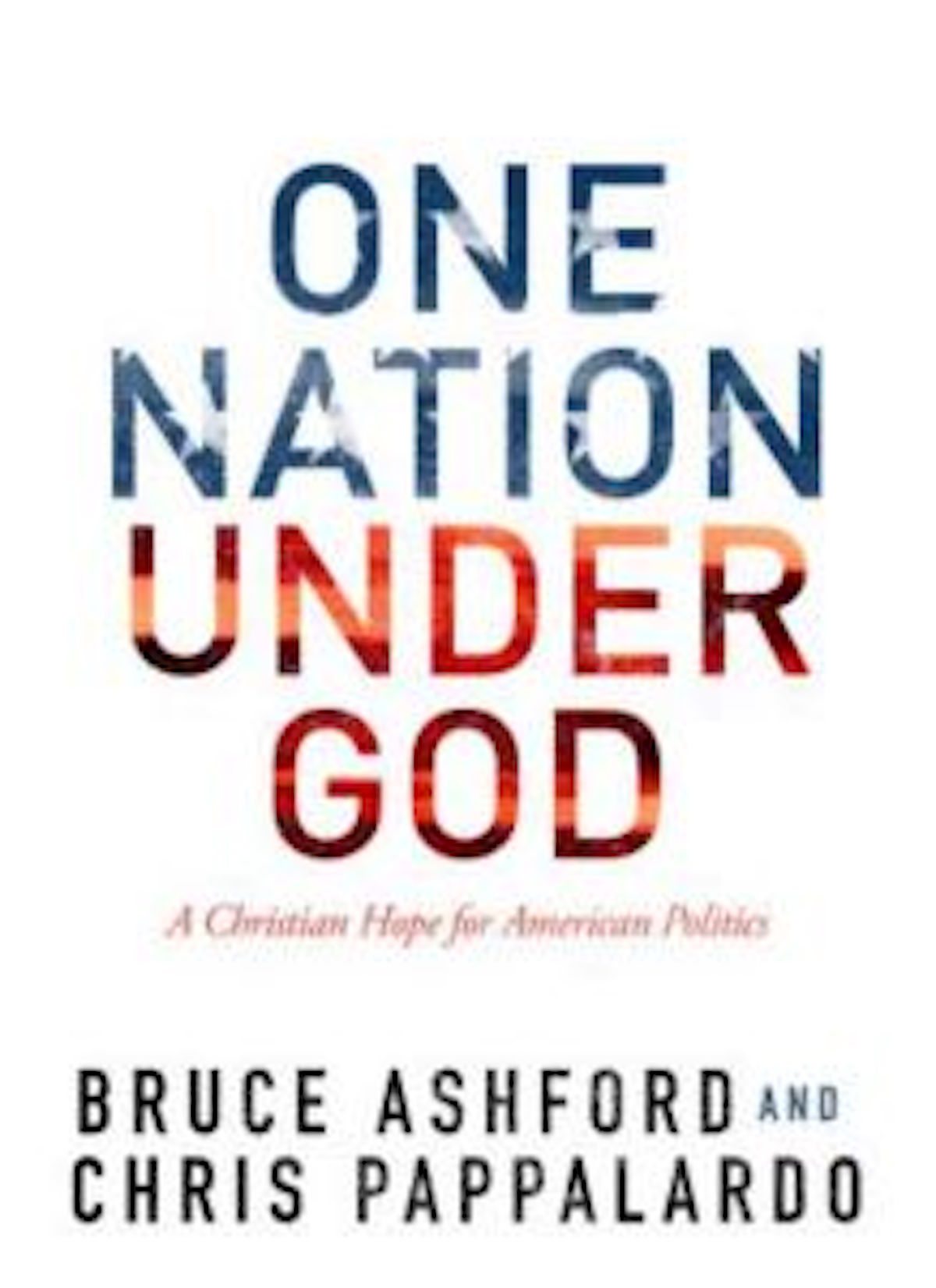 In the first chapter, Ashford and Pappalardo skillfully locate the role of politics within the Bible’s master narrative. Following the tradition of Abraham Kuyper (1837–1920), they draw motivation for political action from the promise of restoration (12). The argument forcefully critiques the pervasive semi-Gnostic view that God is unconcerned with the material world. More Christians need to read these words and rediscover God’s deep concern for the created world and its implications for cultural engagement.

Ashford and Pappalardo then consider the roles of nature and grace, rightly showing how God’s grace actively works to restore and renew the natural realm (21). Christians participate in this renewal, on a political level, by redirecting politics toward its ultimate end: the lordship and glory of Christ. Success in such efforts offers a preview for the world today of what “will become reality on that last day” (24).

Chapter 3 deals with the gospel as a public truth and introduces “sphere sovereignty”—the idea that various dimensions (spheres) of life have an “inherent sovereignty” and “inner integrity” (28). Christians should recognize the integrity of—and Christ’s sovereignty over—each sphere. Since the gospel is not “a private truth to be cordoned off and relegated to our private lives,” every Christian must aim to bring Jesus’s lordship to bear on each sphere, including government and politics (30).

Ashford and Pappalardo then grapple with difficult questions surrounding the relationship of church and state. The modern political narrative, they observe, is bound up with secular modernity, which “pushes people to sideline religious commitments when debating public matters” (32). Recognizing the disastrous consequences of this trajectory, they argue that the church should retain its influence, albeit organically, over the state. Christians shouldn’t seek a theocracy, but those possessing the competence and opportunity to influence government and shape public policy should do so “by drawing on the wealth of the Christian tradition” (42). This point is critical; Christians need not jettison their faith when engaging in the public arena.

Political engagement in an increasingly secular and post-Christian nation is covered in chapter 5. As Christians consider our role in our rapidly changing culture, the authors offer this encouragement: “Christianity, more than any other faith, is uniquely fitted to navigate the complex challenges of being a minority” (44). As our plural society grows evermore diverse, we must maintain space for the expression of multiple viewpoints. Ashford and Pappalardo rightly express that preserving a “convictional and plural public square . . . could achieve a view that allows Christians to retain their convictions without trampling the rights of others” (50).

The sixth chapter presents six ways Christians must allow biblical wisdom and virtue to govern their political engagement. The criteria and subsequent commentary on each are incredibly valuable. I will simply list them here:

In the remaining chapters, Ashford and Pappalardo apply the framework and the criteria from chapter 6 to seven contemporary issues. They address the subjects of life and death, marriage and sexuality, economics, environment, race, immigration, and war. The treatment of each is thoroughly biblical and largely balanced.

Chapter 10, which tackles the subject of environmental stewardship, is an excellent example. The authors first defend a biblical view of the environment: “God cares about his creation and glorifies himself through it. . . . We must resist the sloppy theology that exempts Christians from responsible ecology” (99). They then note two errors regarding ecology, either dismissing legitimate ecological concerns or taking those concerns in an illegitimate direction (100). Finally, they present the work of Francis Schaeffer (1912–1984) as a model who applies “the lordship of Christ to an issue of contemporary importance . . . avoids the danger of short-lived strategies and endorses a longer and broader view of human flourishing . . . showing the non-Christian world that our theology is not a hindrance to responsible ecology but a great blessing” (103).

One Nation Under God is simple and powerful. The book rightly estimates the role of politics for Christians, and then empowers us to press on. Of particular merit is the fact that Ashford and Pappalardo take nothing for granted, thus offering an valuable introduction to political engagement for pastors and laypersons. The arguments are lucid (the framework alone is worth the price of the entire book), and the text highly readable. I’m eager to make this book available to the members of my own church.

I close with three friendly (and relatively minor) critiques.

At many points the authors state their aim is to show us how a given thing is accomplished. For example, in the discussion on church and state they intend to explain how church and state should function together (38), but the brief treatment seemed insufficient and left me yearning for more (an experience that happened more than once).

Throughout the book, the inducement toward political action is predicated on God’s promise of renewal and restoration. Yet we are told many times our efforts will not ultimately endure, though the creation will. A more protracted discussion of eschatological continuity would have been beneficial.

I realize One Nation Under God is a primer. In the main, it’s extremely well balanced. Nevertheless, two small transitions in the chapters on homosexuality and economics pivoted so quickly as to potentially and needlessly offend homosexuals and Democrats, respectively. Concerning the former, once the topic is introduced the discussion immediately jumps to the question of appropriate sexual partners (78). I imagine many gay persons would take umbrage at such an oversimplification. Second, it’s noted many Americans believe the “Democratic Party cares for the poor while the Republican party does not” (93). The authors’ ensuing speedy rejection of redistribution (an economic model favored by many Democrats) will appear to some as a flippant dismissal of a serious approach to economic justice. As a sympathetic reader, it’s clear to me no offense is intended in either case, but I raise these concerns since I believe this book will otherwise benefit readers from all points of view.

To conclude, Ashford and Pappalardo set out to “equip every Christian to apply Christ’s love to the muddied arena of politics” (2). To that I say, “Bravo.” And they did a remarkably helpful job.