In his travel book The Lost Continent, Bill Bryson recounts his quest to find the quintessential American small town depicted in the books and movies of his youth—a town where “Bing Crosby would be the priest” and “Jimmy Stewart the mayor.” In Bryson’s view, “It was inconceivable that a nation so firmly attached to small-town ideals, so dedicated in its fantasies to small-town notions, could not have somewhere built one perfect place.” Sadly, Bryson was disappointed in his quest, eventually realizing he’d need to construct his perfect town piecemeal from the places he visited; a Main Street here, a courthouse there.

Bryson’s Amalgam is a good reminder that the idyllic American town is more fantasy than reality. The more closely we examine that white picket fence, the more peeling paint we see. Our American small towns and rural places, no less than our great cities, have deep shortcomings, struggles, and sins. But closer inspection also reveals some surprising possibilities. 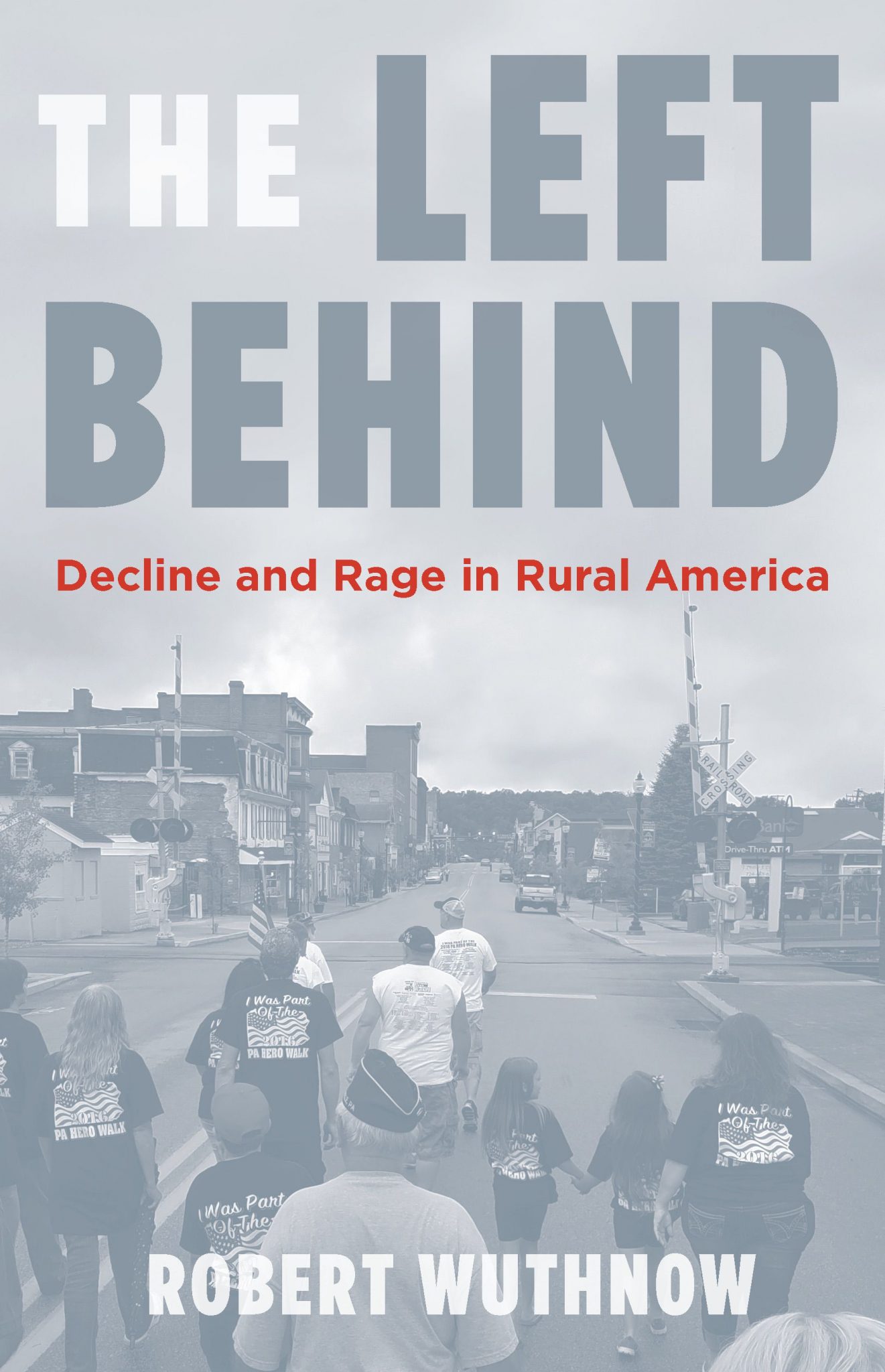 What is fueling rural America’s outrage toward the federal government? Why did rural Americans vote overwhelmingly for Donald Trump? And, beyond economic and demographic decline, is there a more nuanced explanation for the growing rural-urban divide? Drawing on more than a decade of research and hundreds of interviews, Robert Wuthnow brings us into America’s small towns, farms, and rural communities to paint a rich portrait of the moral order—the interactions, loyalties, obligations, and identities—underpinning this critical segment of the nation. Wuthnow demonstrates that to truly understand rural Americans’ anger, their culture must be explored more fully.

Two new (and quite different) books advance the closer inspection by providing thick descriptions of rural communities. In The Left Behind: Decline and Rage in Rural America, Princeton sociologist Robert Wuthnow seeks to understand the roots of rural anger toward Washington and the urban elite, a mood partially responsible for sweeping Donald Trump into the White House in the 2016 election. In Our Towns: A 100,000-Mile Journey into the Heart of America, husband and wife James and Deborah Fallows, recognizing the large-scale breakdown of contemporary national politics, set out to discover what’s being done by way of local efforts and solutions in the forgotten places of America.

The main thesis of The Left Behind is that rural people are upset at the national government not mainly because of economic fears (as many commentators have suggested), but because they perceive their way of life being threatened. The “most elemental fact” about rural America is that it’s “composed of small communities” (13). These communities provide both a sense of home and a shared understanding of deeply held values. This explains why, when rural people feel their communities threatened, a common response is anger toward those they consider responsible.

Wuthnow detail many contemporary threats to rural communities—including population decline, brain drain, teen pregnancy, drugs, lack of jobs, and various cultural threats. While there are attempts at local solutions, they are often makeshift and inadequate. The national government is often seen as unable to help, and, beyond that, as a threat to the way of life in rural communities, meddling in the small places it doesn’t understand.

The Left Behind is rich in observation, detail, nuance, and empathy. In fact, Wuthnow says his message for fellow academics and the liberal elite is that “rural America is not crazy” (160). Though he details the many problems facing rural America, and the large-scale anger toward national government, he finds that, when questioned, rural people often concede the necessity and importance of national programs. Moreover, when Washington seems distant and unhelpful, the pragmatism of rural people often “turns to local and regional solutions and to economic development projects, state government initiatives, and technological innovation” (163–64).

It’s this latter point that James and Deborah Fallows explore in Our Towns: A 100,000-Mile Journey into the Heart of America. The Fallowses bring impressive credentials to their project: Deborah is a writer and theoretical linguist, and James has been a national correspondent for The Atlantic for more than three decades. Between 2012 and 2017, they flew their single-engine Cirrus prop plane on multiple trips across America, visiting dozens of towns and cities, often for a couple weeks at a time, and posting reports for The Atlantic.

The Fallowses’ travel goal was to “take a fresh look at the country, its disappointments and its possibilities” (12). To do this, they sought “parts of the country generally missed by the media spotlight,” particularly “places that had faced adversity of some sort, from crop failure to job loss to political crisis, and had looked for ways to respond” (12–13). Though they began by looking for “medium-sized or smaller towns,” many of their stories of transformation occur in places like Allentown, Pennsylvania (population 120,000) and Sioux Falls (population 174,000)—small cities with resources and opportunities unavailable to the small towns in Wuthnow’s book. Though Our Towns doesn’t focus exclusively on rural areas, what the Fallowses observe in the “flyover” sections of the country leads to some significant conclusions.

They suggest that the national political system is largely broken and ineffective, gridlocked between the two major parties and unable to address many of our struggles with a “politics of solution.” “That is why local resilience and adaptability of the kind we have witnessed deserve national attention,” they explain (397). At some point, the national mood may change ,and people may be ready for significant reform at a national political level. When that time arrives, “a new set of ideas and plans will be at hand. We’ve seen them being tested in towns we never would have suspected, by people who would never join forces in the national capital but who work together ‘at home'” (399). One of the Fallowses’ goals in writing is to connect people working at the local level who don’t know others are doing similar work.

Concerning the importance of rural churches, the difference between the two books is striking. Wuthnow interviews pastors and devotes substantial discussion to the role of churches in rural communities, while the Fallowses largely omit churches from their narrative. They recognize libraries, YMCAs, community pools, community colleges, and craft breweries for community-turnaround efforts—but not churches. Pastors don’t make their list of important civic leaders. One wonders whether this omission reflects an authorial blind spot more than it does the lack of church engagement in the forgotten communities of America.

Nevertheless, both books are helpful for Christians who care about small places. Both highlight rural problems while simultaneously modeling a humble, sympathetic approach to learning about these places. Both appropriately recognize the profound importance of community in the lives of everyday people. One implication is that Christians must participate in our own local communities, learning what they prize and what they fear. We can celebrate what our community values (so long as it doesn’t conflict with gospel values) and also be aware of areas where our community’s values need correction.

Those whom God places in rural places and small towns care about improving these places and will therefore find encouragement in the stories the Fallowses discovered and recorded. But our ultimate hope doesn’t rest in political solutions of the national or local variety. Rather, we see the gospel of Jesus Christ as the transforming reality that will most truly comfort, correct, and heal the small places of America and beyond.