Growing up in pietistic evangelical circles, I attended a “revival” service at least once a year. Every spring and fall, some nearby church was hosting a revival, and all the local youth groups would attend. The formulaic services were the same: the latest Hillsong music, a dynamic speaker, and an altar call. We would all leave in our church vans, feeling good about ourselves, only to find the feelings of elation wear off in a few weeks.

Not all revivals are so ineffective, however. After the Pyongyang Revival of 1907, surveys indicate the Korean Protestant population grew by roughly 2.5 million adherents and 1,300 churches from 1907 to 1977. In what is now the sole surviving foreign eyewitness account of that revival, this reprint of The Korean Pentecost and the Sufferings Which Followed by William Blair and Bruce Hunt not only serves as a retelling of an important piece Korean church history, it also serves as a handbook for revival.

In the early years of the Korean church, Christians all around the country would gather in their local churches for an uninterrupted Bible study during the first two weeks of January. In Pyongyang, representatives from each of the churches would also gather for a special Bible study with the foreign missionaries. This unique Bible study system was created and implemented by Korean Presbyterians to start every new year drenched in prayer, Bible study, and singing. Of these Bible studies, Blair writes, “Let America follow Korea’s example in this one thing and the revival problem will take care of itself” (78).

On the 12th night of the 1907 Bible study class in Pyongyang, those that gathered in the church described “a sense of God’s nearness, impossible of description” (83). After a short sermon, one of the Korean church leaders led everyone in attendance in prayer. According to Blair, this prayer “was indescribable—not confusion, but a vast harmony of sound and spirit, a mingling together of souls moved by an irresistible impulse of prayer . . . an ocean of prayer beating against God’s throne” (83). 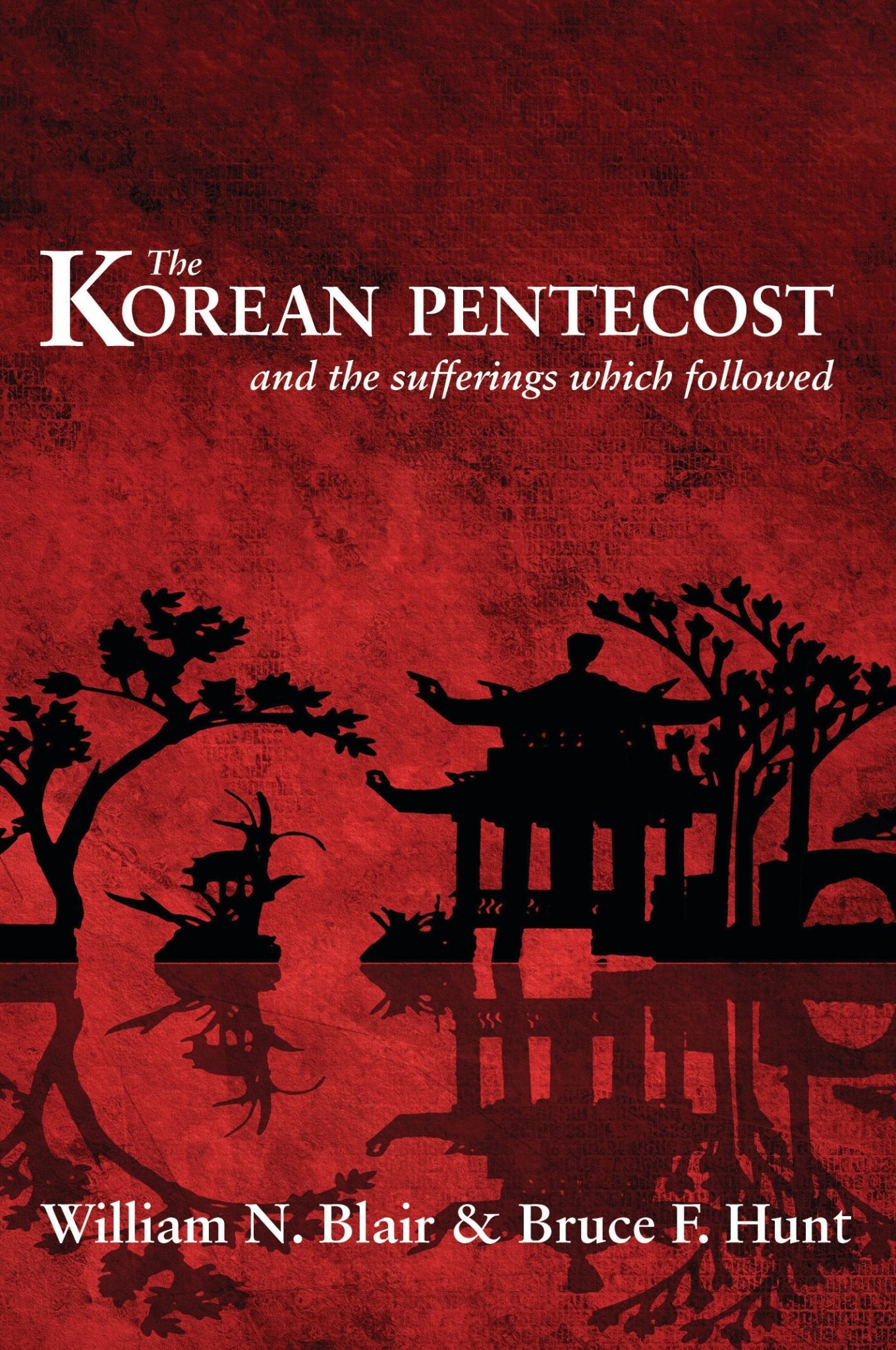 The Korean Pentecost and the Sufferings Which Followed

The Korean Pentecost and the Sufferings Which Followed

In 1977 the trust published this remarkable account of the first 60 years or so of the modern church in Korea (mainly North Korea). William Blair (1876–1970), in his first term of missionary service, was at the center of the great revival of 1907, and his account of this and the events leading up to it forms the first part of the book. Blair includes a thrilling description of how the gospel first came to Korea. The account is then taken up by his son-in-law, Bruce Hunt (1903–92)—born in Pyengyang, now the capital of North Korea—who shows how the revival was followed by a baptism of suffering under the Japanese and Communists. During his 48 years of missionary service in Korea, Hunt personally knew many of the Korean Christian martyrs.

The gathering was even more intense the following night. Concerned about the intensity of the meeting, the missionaries gathered together as soon as they could to discuss the situation. In the end, the consensus was that they had pleaded with God for an outpouring of his Spirit, and he had answered, so they dared not interfere. Then the unthinkable happened:

Then began a meeting the like of which I had never seen before, nor wish to see again unless in God’s sight it is absolutely necessary. Every sin a human being can commit was publicly confessed that night . . . . We may have our theories of the desirability or undesirability of public confession of sin. I have had mine; but I know now that when the Spirit of God falls upon guilty souls, there will be confession, and no power on earth can stop it. (86–87)

The next day, the men in attendance returned to their churches where the revival spread throughout the entire Korean Peninsula. Similar incidences of confession of sin, weeping, and praying occurred spontaneously throughout the land. Even schools had to close down for days as children wept together over their sins.

At the same time, the revival had an evangelistic component. As Blair writes, “Repentance was by no means confined to confession and tears. Peace waited upon reparation, wherever reparation was possible” (88). Christians paid back stolen property, money obtained unjustly, and other injuries to both Christians and non-Christians. Indeed, restitution was among the most conspicuous fruits of the Pyongyang Revival.

Three important distinctions of the Pyongyang Revival stand out from other modern claims of revival:

The combination of these three practices had a profound effect on the growth and sustainability of the revival.

First, the leadership of ordained and seminary-trained foreign and native church leaders assured the doctrinal unity of the churches, at least during the early years.

Second, the use of catechisms maintained the health of the local church as new converts transitioned into church members. Catechisms assured that conversions were more than mere emotional experiences and that discipleship included training in the basics of theology, Christian ethics, and church polity by the time catechumens were baptized. In other words, emphasis was placed on the transformation of both the mind and heart.

With the revival in full swing, Korean Christians were soon pulled into the public square in the wake of a political leadership vacuum. Most Christians engaged politics cautiously as they affirmed the separation of church and state. In one of Korea’s first corporate displays of resistance against Japanese occupation, a disproportionate number of Korean Christians made up the leadership and participants of what is now known as the March 1st Movement (1919).

This movement produced the Korean Declaration of Independence, which included 33 signers, 13 of whom were Christian in a nation where less than 5 percent of the population was Christian at the time. Consequently, Christian resistance against Imperial Japan and the Presbyterian rejection of Japanese emperor worship, in particular, resulted in the martyrdom of many foreign missionaries and Korean Christians. This was the first wave of persecution.

Not surprisingly, it was these Christians’ passionate love for their neighbors and the sacrifices they made for human rights, women’s rights, liberation, and the common good that added to the credibility of the Christian faith in the eyes of the intellectual and political elite of that time. A spirit of co-belligerency for a common good with non-Christians continued to strengthen the reputation of the church (and its numbers) such that the first president of South Korea was a professing believer. To put it another way, the Korean church advocated for the marginalized and oppressed on both individual and systemic levels.

As persecution of the Korean church exchanged hands from Imperial Japan to North Korean Communists after World War II, the Christian population in the northern provinces witnessed a steep decline. Stories of systematic kidnappings, disappearances, and executions of church leaders began leaking into the south. Seminaries and churches were reportedly razed to make room for the cult of Kim Il Sung. As a result, many Christians from the north fled south as refugees during the Korean War. This was the second wave of persecution.

As the secular and non-Christian segments of America’s population continue to grow, the demographic context for revival in America continues to depart from the context of the Great Awakenings. Whereas in the past the primary groups influenced by revivals were de-churched and churched people, the next revival must expand its reaches to unchurched groups like secular agnostics, Muslims, Hindus, and Buddhists for it to truly be a third “Great” Awakening.

In this sense, we have much to glean from the Pyongyang Revival as the flames of revival quickly spread from Christians to unchurched agnostics, shamanists, and Buddhists. Indeed, their evangelistic fervor combined with a heartfelt pursuit for the common good proved effective for winning the hearts and minds of the broader population.

Moses Y. Lee (MDiv, ThM) is a pastor at Rosebrook Presbyterian Church in North Bethesda, Maryland. He’s a contributing author to Hear Us, Emmanuel: Another Call for Racial Reconciliation, Representation, and Unity in the Church (White Blackbird, 2020) and is on staff at the Korean American Leadership Initiative (PCA). You can follow him on Twitter.