In her new book, Joyful Witness in the Muslim World: Sharing the Gospel in Everyday Encounters, Evelyne Reisacher—an associate professor of Islamic studies and intercultural relations at Fuller Theological Seminary—casts a vision for Christians entering relationships with Muslims based on shared joys.

She does so by tracing how these relationships can blossom in six spheres: the internet, the arts, environmentalism, humanitarian service, urban contexts, and theological conversations.

When they see Muslims, they mask their negative emotions with a smile and pretend they are happy to see them. They offer to connect with them only because they want to witness. . . . Once a Muslim refuses the gospel, a Christian who has been thus motivated will probably rupture the bond, leaving the Muslim even more confused about the real reasons Christians engage with Muslims.

Reisacher isn’t aiming to train Christians on how to share the gospel with Muslims in their everyday life (unless you already happen to know a lot of Muslims); nor is she trying to encourage Christians to befriend Muslims expressly for the sake of sharing the gospel. She wants to organically overlap the Christian and Muslim world at cultural points of intersection in hopes that Christian lives will radiate God’s joy among Muslims. Her aim, though hard to define, is noble: Let’s live shoulder to shoulder with Muslims and watch what God does.

Vision for Maturity in Muslim Ministry

As a freshman from a Bible Belt background entering a liberal college town, I remember my zeal for evangelism upon discovering some people openly admitted they weren’t Christians. I went on a gospel-sharing spree! With Four Spiritual Laws tracts in my pocket and the Romans Road on my tongue, I shared with anyone and everyone. I diligently (to the point of falling into pride) kept track of how many prayed to receive Christ. By the end of college, though, I was humbled to realize the number of those “new believers” I could still locate was shamefully small. This experience showed me the difference between “selling fire insurance” and making disciples.

Reisacher similarly relates examples of making “beginner’s errors” in her relationships with Muslims, and how she matured into new perspectives. She has spent time and diligent study among Muslims for 40 years. For those seeking to live and work among Muslims, her work is instructional. And it conveys an important point: we must grow from convert-makers into disciple-makers. 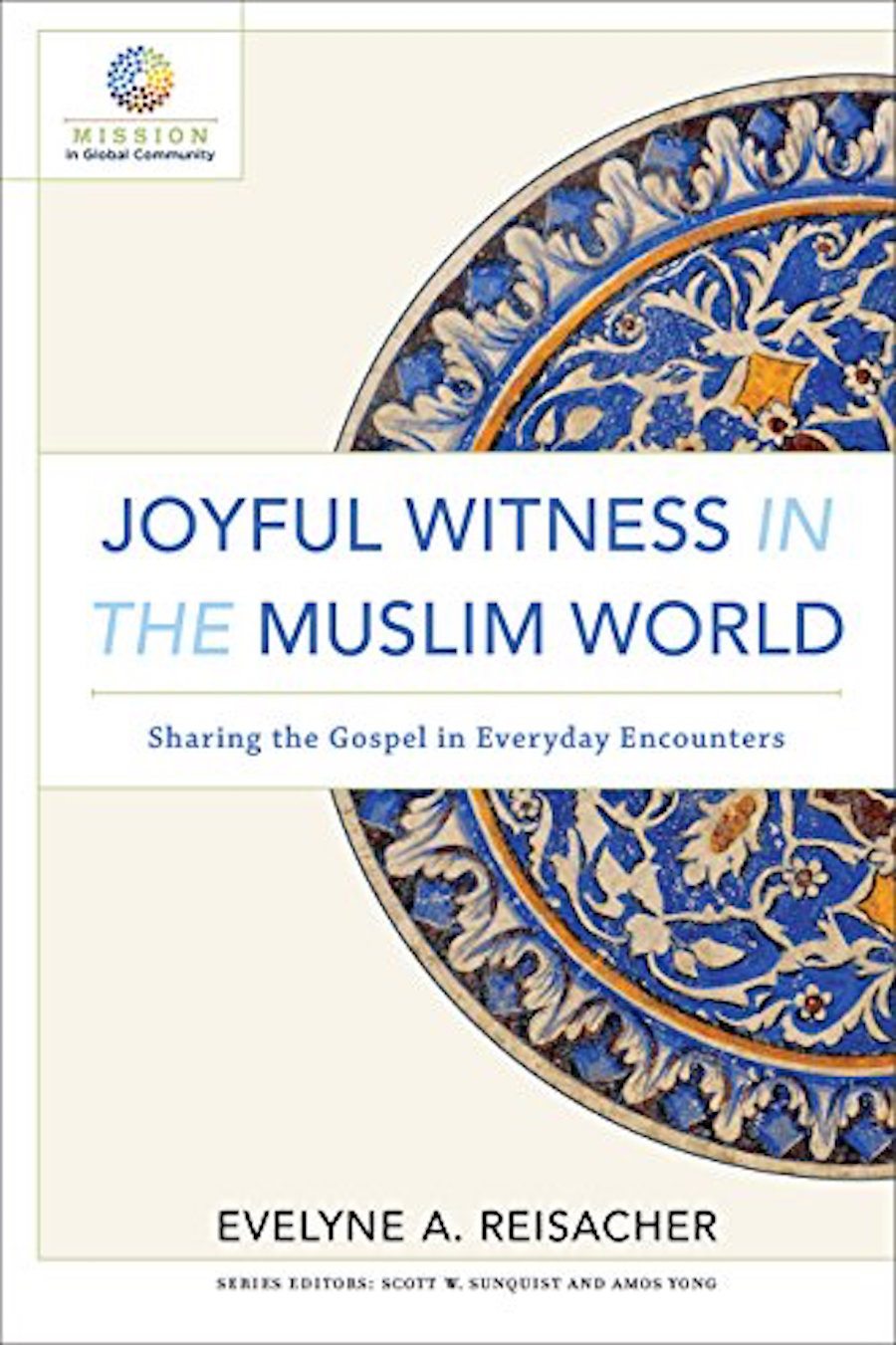 Joyful Witness in the Muslim World: Sharing the Gospel in Everyday Encounters

Joyful Witness in the Muslim World: Sharing the Gospel in Everyday Encounters

Christians who connect with Muslims on a personal level will relax, feel less pressured to force unnatural conversations, truly understand their new Muslim friends, and be a more effective incarnation of Christ. If you take up Reisacher’s work, I encourage you to read in that light—not discouraged by immaturity, but rather challenged to press on to maturity.

Efforts Outside Our Social Reach

At the same time, though highly valuable, Reisacher’s vision simply isn’t big enough, as it discounts other outlets for kingdom growth in the Muslim world. Due to the nature of her Western audience, she prescribes relationships between Western Christians and Muslims open to the West. How then shall we contribute to reaching those Muslims outside our social reach? Since we’re unable to be deeply relational with them, how can we genuinely express the gospel to them? If I share with them in a way that isn’t deeply relational—through an anonymous Bible distribution online, a radio program, or a short-term trip—then is that an irresponsible ploy or “evangelistic marketing technique”? Or if I have a gospel-centered reason to befriend a Muslim, am I sinister?

I’d consider this issue outside the scope of Reisacher’s book if it weren’t for the ways she discredits other missional efforts less organic and more intentional. If someone befriends two Muslim families and discovers one is more open to the gospel, is it somehow fake or unloving to sacrifice time with the less-open family? Given our time and energy limits, is it wrong to strategize in our Muslim friendships? Reisacher would most likely say you shouldn’t have a “strategy” in real friendships since it dehumanizes and reveals a hidden agenda. In missiological terms, though, we must remember that Paul wasn’t known simply for “what a good friend he was to those few Gentile guys,” and that Jesus taught his own disciples that if a host didn’t heed their word, then “shake the dust off your feet when you leave that home” (Matt. 10:14). It’s not unloving to leave one who rejects the gospel to find one who will accept it. And it’s not unloving for gospel-sharing to be the primary motivator in your friendships with Muslims—or anyone else for that matter. Love wants its friends to live eternally.

Though Reisacher acknowledges some good books on models of ministry among Muslims, she discredits any “methods” as “dehumanizing” and assures us she isn’t prescribing a method. However, practical training for ministry and offering suggestions for methods is strategically loving toward the Muslim world, since it helps the church better share the gospel. Such trainings lower the primary barrier to entry for Christians—a lack of knowledge, which Reisacher repeatedly laments. The Romans Road helped me, serving as “training wheels” while I matured in evangelism. Likewise, different evangelistic tools or models can be useful in sharing the gospel with Muslims. Eventually, believers may have enough experience to cast aside their training wheels. Until then, there’s nothing dehumanizing about being prepared to share Jesus with those who desperately need him, just as it’s not dehumanizing for Reisacher to prepare a lesson plan when she instructs her seminary classes.

Reisacher has a self-conscious moment in her conclusion. Noting that she could be accused of presenting a method or strategy for sharing the gospel, she protests:

To use these exchanges only as a pretext for sharing the gospel would be to misunderstand my intentions. Encounters generated in this manner could not be called “ordinary” anymore, since they would conceal a hidden agenda . . . Readers could fail to commit their heart to what they were involved in with Muslims . . . because the shared activities are an excuse for engaging Muslims.

She says this as if deliberately seeking out Muslims is somehow dishonest if a heart to witness is driving you—as if an evangelist’s motive is the same as an old friend from junior high finding you on Facebook just to sell you some essential oils. But the difference, of course, is that our motive for sharing the gospel isn’t for our own gain. We’re much more like the stranger who, after seeing your home destroyed by a flood, seeks you out to tell you where to find the Samaritan’s Purse truck. Yes, we have an agenda, but the agenda is to give, not to get. And more importantly, the agenda isn’t hidden, and it isn’t finally ours.

Jesus gave us our agenda when he commanded us to go and make disciples (Matt. 28:18–20). There’s nothing insincere in unashamedly obeying him by approaching friends and strangers with gospel grace. We simply can’t be best friends with everyone. If we share with someone and never see them again, praise the Lord. That link in the chain may ultimately lead the person to Christ.

Joyful Witness in the Muslim World is a needed contribution to the conversation about the church’s engagement with Muslims. Reisacher sees Muslims as real people to be mutually enjoyed the same way we enjoy friends from our own cultural background. Muslim friends aren’t “projects”; they’re people just like us. A mature minister, then, will see the value of pursuing an incarnational witness among them.

But we must also remember the command of Christ and example of Paul, and unashamedly enter Muslim circles with the expressed intent of sharing Christ. As we do, we’ll learn the same lessons Reisacher learned in her own engagement of Muslim friends.