It’s difficult to imagine two books on the same topic more different than the two under review here. Though both have “Jane Austen” in the title, they diverge in sources, methods, aims, conclusions, interests, and style. Paula Hollingsworth—a priest and a frequent speaker on English literature—offers straightforward biography and brief but close readings in The Spirituality of Jane Austen. Devoney Looser—a professor of English at Arizona State University—doesn’t pay much attention to the “real” Austen or the text of her novels in the Making of Jane Austen; her book studies the way Austen’s novels were depicted in various media.

Hollingsworth’s project is noble and necessary. She sets out to show that Austen was a Christian who wrote Christian fiction. Both statements are correct, and often neglected. Readers familiar only with the Collinses and Eltons of Austen’s novels may forget her father was a minister in the Church of England, she was a lifelong churchgoer, and two of her brothers were also pastors. Hollingsworth rightly puts Austen where she belongs—in a clerical home.

The Spirituality of Jane Austen interweaves biography with summaries and criticism of Austen’s novels. The criticism is often insightful. Hollingsworth is very good on Mansfield Park. In her reading, Fanny Price saves the Park, and she nicely observes that the novel ends with a “judgment day” that consigns each character to his and her deserved fate. Dr. Grant, the dilatory parson of the Park, is consigned to the infernal settings of Bath and then London, where he dies as a result of “three great institutionary dinners in one week” (quoted 133). Hollingsworth offers some neat glosses on Persuasion as well. Sir Walter Elliot consults the Baronetage for consolation, as if it were a holy book. He, too, is eventually sent off to Bath (did he ever meet Dr. Grant?), outcast from the ancestral home in which he took such vain pride.

Yet Hollingsworth’s properly Christian reading of the novels at times results in superficial analogies. It’s true that the Dashwoods’ “experiences of loss followed by inner growth leading to new life mirror the biblical story at the heart of the Christian faith—death and resurrection” (62). But Hollingsworth says the same of Pride and Prejudice (74), and we begin to suspect that her category is so large and flexible it will apply to anything.

She gets off on the wrong foot from the outset, defining the “spirituality” of her title in terms of values that guide life, the desire to live in light of a spiritual realm, and the marking of an “inner path” that allows one to “discover the essence of his or her inner being” (12). But is Austen really interested in “inner paths”? Assuming she is, Hollingsworth belittles the obvious. She admits, for instance, that Austen’s first three novels end with weddings, but denies that they are romances since the real action is taking place “in the minds and hearts of her heroines” (80–81). Is Austen really so much an 18th-century evangelical?

Hollingsworth sometimes finds too easy correlations between Austen’s life and her novels. Did she need to experience homesickness to depict Fanny Price’s (86)? Does Austen express her own view of novel reading and writing when the narrator of Northanger Abbey says, “I will not adopt that ungenerous and impolitic custom, so common among novel writers, of degrading, by their contemptuous censure, the very performances to the number of which they are themselves adding”? (quoted 54).

That last example highlights another defect of Hollingsworth’s book: her failure fully to grasp the layers of irony in Austen’s novels and letters. The paragraph from Northanger Abbey comes from the same narrator who begins the novel with a self-conscious reflection on the unheroic character of her heroine. Catherine Morland learned writing from her father, French from her mother, but “she shirked her lessons whenever she could.” The narrator adds, “What a strange, unaccountable character!”

The joke, of course, is that Catherine is exactly the opposite—an ordinary girl trying to get out of her lessons. The narrator’s claim to avoid criticism of novels is also a joke, because it’s precisely Catherine’s obsession with Gothic fiction that leads her to imagine the residents of Northanger Abbey are guilty of enormities. Yet the irony twists again because Austen can’t present a convincing parody of a Gothic novel without writing a Gothic novel.

Hollingsworth’s deafness to tone is evident in her dismissal of Austen’s Juvenalia as “immature” and her comment that Austen eventually abandoned the “burlesque comedy” of her early writing. This is accurate in a matter-of-fact way: Mr. Collins doesn’t suffer any pratfalls or get bopped on the head with an umbrella. Yet he is a clown and would be right at home in Love and Freindship [sic]. Hollingsworth thinks Austen returns to her youthful voice in Sanditon, but Virginia Woolf, more accurately, thought Austen never lost it. Woolf had the better ear: she heard the laughter of teenaged Jenny Austen echoing down the back corridors of her “mature” fiction.

Hollingsworth devotes the final chapter of her book to Austen’s legacy, and Devoney Looser’s The Making of Jane Austen picks up where Hollingsworh leaves off, tracing Austen’s reputation and reception from 1833 (when her novels were republished) to 1975 (the bicentenary of her birth). Looser examines book illustrations, dramatizations, political uses of Austen, and academic study of the novels in considerable—not to say numbing—detail, exhuming the forgotten artists, writers, and activists who turned Jane Austen into Jane! Austen!

One of Looser’s themes is the diversity of responses to Austen’s novels:

Highbrow, middlebrow, and lowbrow culture makers, whether working together or at cross purposes, collectively changed Austen’s persona from that of a marketable author of sensational domesticity to an apolitical Christian-spinster moralist to an inspirer of women’s suffrage protesters to a flirtatious gender-role-bending demure rebel to the hyper-heterosexual creator of the sexiest fictional man alive. (11–12)

Another theme in The Making of Jane Austen is that those ignorant of this history tend to repeat it. Colin Firth’s manly, sexy Darcy revived the manly, sexy stage Darcy of the early 20th century (99)—though, admittedly, no stage version included a wet shirt scene. In her adaptation of Pride and Prejudice, Mary Keith Medbery MacKaye put a whip in Darcy’s hand for his second proposal to Elizabeth, a sign that “the Heathcliffing and Bronteization of Austen is not a recent invention” (104). Long before Edward Said, Austen’s name was invoked for progressive causes, arousing the indignation of G. K. Chesterton, who insisted Austen was a conservative. 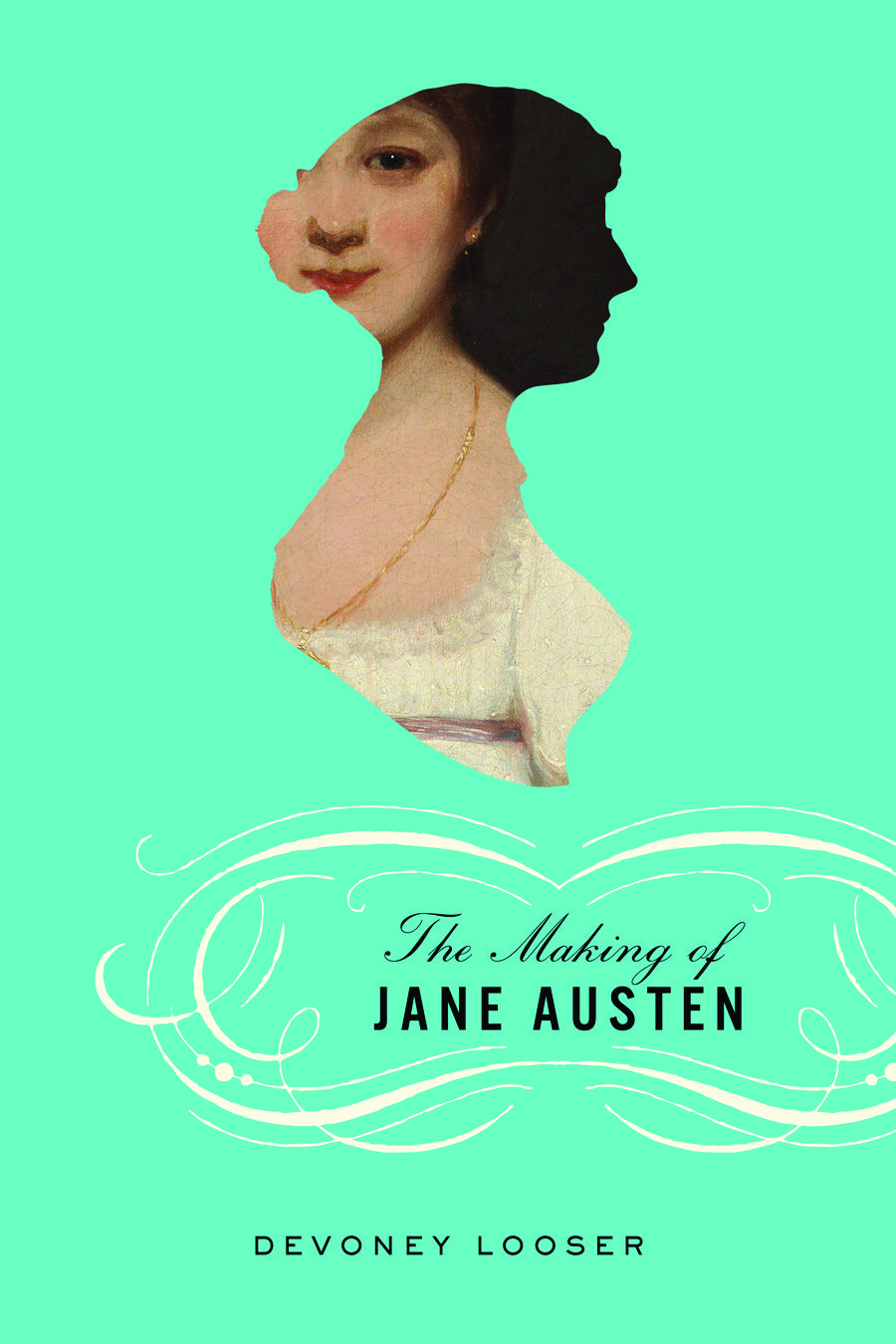 The Making of Jane Austen

The Making of Jane Austen

Just how did Jane Austen become the celebrity author and the inspiration for generations of loyal fans she is today? Devoney Looser’s The Making of Jane Austen turns to the people, performances, activism, and images that fostered Austen’s early fame, laying the groundwork for the beloved author we think we know.

Whether you’re a devoted Janeite or simply Jane-curious, The Making of Jane Austen will have you thinking about how a literary icon is made, transformed, and handed down from generation to generation.

Even the most radical interpretations of Austen have their prehistories. Eleanor Holmes Hinkley’s play Dear Jane, produced in the 1930s, opens in a pub in 1775 where Johnson, Boswell, Joshua Reynolds, and David Garrick are discussing the artistic potential of women. They agree there isn’t much: “There breathes no female alive who is, or ever shall be, capable of true creation” (quoted, 118). Disproof of their theory is happening in another part of England: Jane Austen is being born. The play shows Austen wooed by “three eligible men—one like Wickham, one like Collins, and one a defective Darcy.” She rejects all of them so she can devote herself to her genius and stick close to her sister Cassandra (119).

In the end, the sisters Austen escape from the home of the last of the suitors, Sir John Evelyn:

They head off, as anyone who knew Austen’s life story would have known, to an unmarried future together. The play’s final scene, as it’s described, also mirrors a marriage proposal. It produces a no rather than a yes, yet it’s also a love scene. It involves a declaration to a loved one (about not being in love elsewhere) and a dropping down on one’s knees. It provides a twist on the couple riding off into the sunset happily ever after, substituting a running off into the darkness. (121)

The actresses who played Jane and Cassandra, Eva Le Gallienne and Josephine Hutchinson, were lovers, which added scandal to the veiled scandal of the play itself. Already in 1932, audiences were treated to a “queer Jane.”

It’s good to know how we got from there to here, from the real Austen to the Austens of popular imagination. But Looser loses the story in details; a shorter, tighter book would’ve been more effective. More seriously, Austen and her books dissolve into reception history, her “real” life and textual “meaning” disappearing under inverted commas. If you have the leisure to discover the middling artists and writers who helped form Austen’s reputation, Looser is worth a browse. If you’re interested in Austen and her novels, the old-fashioned Hollingsworth is the better choice.

View a special Christmas greeting from Don Carson and learn more about joining us in ministry here.