I grew up in America’s heartland, where main streets featured patriotic flags, white picket fences, and redbrick churches. Today, in Small Town U.S.A., churches are closing. Homes are in disrepair. And while you’ll still find plenty of flag-waving Americans, those banners increasingly display symbols and colors that divide more than unify.

These developments reflect the significant social, economic, and religious changes happening in America’s heartland—not to mention massive cultural shifts in its metropolitan centers. As many have noted, we now inhabit a post-Christian and largely secular society. However, this doesn’t suggest society alone needs saving; the American church has its share of problems.

In their book, Inalienable: How Marginalized Kingdom Voices Can Help Save the American Church, Eric Costanzo, Daniel Yang, and Matthew Soerens explore how God can renew American evangelicalism—and our nation—as we learn to listen to insights from the global church. Just as African and Asian diasporas are revitalizing post-Christian Europe, the future of American Christianity could be in those arriving on our shores. 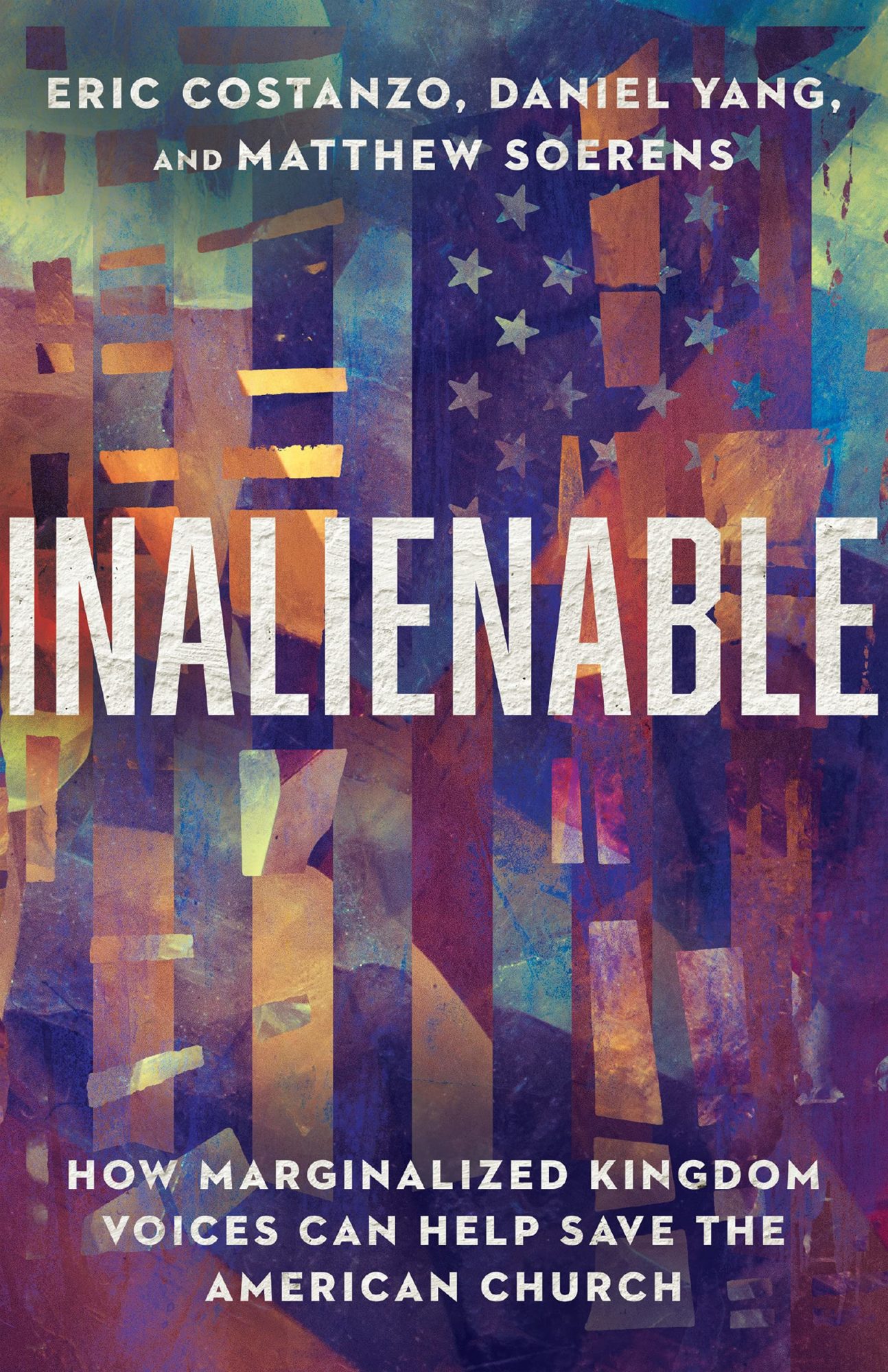 Inalienable: How Marginalized Kingdom Voices Can Help Save the American Church

Inalienable: How Marginalized Kingdom Voices Can Help Save the American Church

The American church is at a critical crossroads. Our witness has been compromised, our numbers are down, and our reputation has been sullied, due largely to our own faults and fears. The church’s ethnocentrism, consumerism, and syncretism have blurred the lines between discipleship and partisanship.

Pastor Eric Costanzo, missiologist Daniel Yang, and nonprofit leader Matthew Soerens find that for the church to return to health, we must decenter ourselves from our American idols and recenter on the undeniable, inalienable core reality of the global, transcultural kingdom of God. Our guides in this process are global Christians and the poor, who offer hope from the margins, and the ancient church, which survived through the ages amid temptations of power and corruption. Their witness points us to refocus on the kingdom of God, the image of God, the Word of God, and the mission of God.

The path to the future takes us away from ourselves in unlikely directions. By learning from the global church and marginalized voices, we can return to our roots of being kingdom-focused, loving our neighbor, and giving of ourselves in missional service to the world.

Now, some may question whether the American church needs saving. At a time when society increasingly abandons so-called Judeo-Christian ethics and supports radical views on race, gender, and sexuality, it may sound tone-deaf to emphasize the church’s sins. In fact, a growing number of evangelicals are convinced these developments call for increased political engagement and an outward-facing culture war. This isn’t the time, they insist, to focus inward on corporate pietism.

Just as African and Asian diasporas are revitalizing post-Christian Europe, the future of American Christianity could be in those arriving on our shores.

However, that’s not what Costanzo, Yang, and Soerens are advocating. Instead, they contend the (white evangelical) church needs to be rescued because “Christians in the United States have silently tolerated or openly embraced nationalism, sexism, and racism” (1). In other words, they see the church as complicit in many of the problems that plague our culture. They also see evangelicalism’s failure in these areas as undermining the gospel’s reputation and pushing younger Christians toward deconstruction.

Another significant concern for the authors is that white evangelicals are often ignorant of or insensitive to the plight of immigrants and refugees—many of whom are Christians fleeing persecution and suffering (144). As such, Inalienable reads as a kind of sequel to Soerens’s earlier collaboration with Jenny Yang, Welcoming the Stranger. Yet the authors don’t presume immigration to be the church’s only problem. According to Soerens, it’s “just the tip of the iceberg” (15).

The solution Inalienable offers, then, moves beyond embodying a more welcoming disposition toward foreigners to actively listening to their insight, perspective, and wisdom. As Daniel Yang observes, these marginal communities from the global church offer white evangelicals “prophetic reminders” of what biblical Christianity should be.

In my ministry, I’m privileged to interact with believers across the world. This includes those in other countries as well as diaspora Christians residing in the U.S. Like the authors of Inalienable, I’m grieved when American evangelicals are unmoved by the challenges immigrants face or the system that often conspires against them. I wish majority-culture Christians were more aware of their sisters and brothers who’ve fled poverty, persecution, and war, and appreciative of their amazing faith and spiritual perception.

Citing extensive research, quoting ethnic church leaders, and sharing personal anecdotes, the authors of Inalienable make a compelling case that diaspora Christians are already helping to save the American church from significant decline (45). The question they ask is whether we’ll listen when they critique the church’s American idols, including individualism, materialism, consumerism, and nationalism.

In my experience, Christians from other nations have much to offer the West. They can teach us from their experiences of serving and suffering, evangelism and prayer, pastoral care and spiritual warfare. As cultural outsiders, they’re also able to identify our cultural blind spots. Of course, that doesn’t mean they don’t have their own.

This brings me to Inalienable’s greatest weakness. Throughout the book, Costanzo, Yang, and Soerens seem to suggest “marginalized kingdom voices” are valid simply by virtue of being from the minority. They encourage accepting ethnic perspectives as normative (58) and propose valuing all non-Western perspectives equally (117)—without sufficiently qualifying that such perspectives must be tested by Scripture.

Evangelicals should listen to different voices. But we must have an objective basis for receiving or rejecting a minority-culture believer’s reading of Scripture.

As someone inclined to agree with the authors’ primary thesis—that American evangelicals stand to benefit from listening to the global church—I found myself frustrated by this lack of nuance and necessary qualification. Evangelicals should listen to different voices. But we must have an objective basis for receiving or rejecting a minority-culture believer’s reading of Scripture. We shouldn’t be suspicious of opinions that originate from what Inalienable calls the “White, Western captivity of the American church” (129). Nor should we accept “innovative interpretations” (120) simply because they’re from an oppressed or marginalized group.

While Inalienable encourages a helpful conversation, my concern is that it fails to provide sufficient ground rules to moderate such discussions. As a result, I’m not convinced it will help Christians to discern teaching, test spirits, and “approve what is excellent” (Phil. 1:10).

In the end, God may choose to rescue the American church from decline—and from her sins—through the influence of believers from other countries. I pray he does. And if it happens, it will likely result in even more cultural change in churches, cities, and small towns across our land.

Of course, that shouldn’t make Christians nostalgic for America’s past but hopeful for its future. As we seek to be a community transformed by God’s Word, we should be willing to learn from one another. For those of us facing a future as cultural outsiders in the post-Christian West, perhaps believers with experience living as sojourners and strangers are the first ones we should listen to.