Taking the advice of C. S. Lewis, we want to help our readers “keep the clean sea breeze of the centuries blowing through our minds,” which, he argued, “can be done only by reading old books.” Continuing our Rediscovering the Forgotten Classics series, we want to survey some forgotten and lesser-known Christian classics.

“Do not hide your face away from me, for I would gladly meet my death to see it, since not to see it would be death indeed.” — Augustine

Confessions is an autobiography, yet it’s much more. It’s a theological treatise, though it’s much broader. It’s a prayer, but it goes much deeper. To read Confessions is to witness a brilliant and flawed man contending with the God he loves. In fact, the book in its entirety is addressed to God. With the intimacy of a memoir, the sophistication of a philosophical dissertation, and the honesty of a brokenhearted child crying out to his father, Confessions transcends the signification of genre. It can’t be classified. But it must be reckoned with.

Any theologian worth his salt will have to deal with the famed bishop from Hippo, Augustine. His influence on Western civilization is enormous. His colossal legacy is such that he’s regularly cited in attempts to end theological debates, since his authoritativeness is widely acknowledged.

Reading Confessions for the first time wasn’t a mundane seminary assignment or a stale intellectual exercise for me. I discovered this book after walking through a profoundly dark period of doubt in which everything I believed about God, Jesus, and the Bible was deconstructed by a class I attended at a local church. The facilitator of the class was a pastor—more specifically, a “progressive” Christian pastor—who had become an agnostic, through his own season of deconstruction.

In Augustine, I met a man so impassioned with love for God that his soul seemed to bleed every word on to the page. I discovered a man who lived centuries before me, but articulated a commitment to Jesus that felt so current and familiar that I could have written it myself.

For a few long and painful months, the class rattled me to my core. Week after week, criticisms of the church and evangelicalism were entertained. I was left wondering if the Christianity I knew could historically be called “Christian.” This sent me on a quest to discover historic Christianity. I wanted to know what defined “historic Christianity” and what had made it unique for 2,000 years. As I began studying church history, someone recommended I pick up a copy of Confessions.

I didn’t know what to expect, but I liked the idea that it was an old work of literature and would allow me to take a peek at what Christianity looked like in the fifth century. I wasn’t prepared for what I’d find in its pages. I met a man so impassioned with love for God that his soul seemed to bleed every word onto the page. With each pen stroke, I beheld the tender heart behind the brilliant mind. 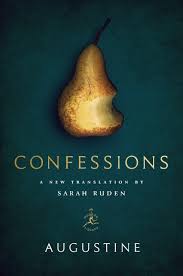 I discovered a man who lived centuries before me, but articulated a commitment to Jesus that felt so current and familiar that I could’ve written it myself—were I talented enough to find the words.

I read in awe as Augustine reasoned through the nature of God—a being not constrained by or contained within nature—refuting pantheism and panentheism (a popular view in the progressive Christian church). Though progressive Christianity questioned what I believed about God’s attributes, with prayer and praise Augustine demonstrated God’s self-sufficiency, immutability, and eternality with breathtaking clarity. He contemplated the essence of truth, man, sin, salvation, and time. His attention to detail when confessing his sins convicted me that I had not thought deeply about my own.

Even though proper theological terms hadn’t yet been assigned, Augustine expounded concepts like divine simplicity and the depravity of man. Memorably, of substitutionary atonement, he writes, “Jesus, your only Son, in whom all hoards of knowledge and wisdom are hidden away, bought me back at the price of his blood” (Ruden). For someone who’d been taught that penal substitutionary atonement was “divine child abuse”—that if God required the sacrifice of his only Son, it made him some kind of cosmic abuser—Augustine’s words felt like a cold glass of water after crawling across a desert. His belief in the physical resurrection of Jesus and his love for the Scriptures as God’s Word rang out like songs above the din of other noise: “How wonderful are your Scriptures! How profound! We see their surface and it attracts us like children. And yet, O my God, their depth is stupendous. We shudder to peer deep into them, for they inspire in us both the awe of reverence and the thrill of love.”

The simplicity of a sinner saved by grace is put on shining display in Confessions.

In progressive Christianity, it’s suggested that many of these doctrines were the modern inventions of a “white man’s religion.” But here was a fifth-century African bishop saying, “No, these truths are timeless.” The nature of God, the message of the gospel, and the hope we have in Christ to save us from sin aren’t “progressive,” nor are they particular to any ethnic, socioeconomic, or political community. They’re eternal realities culminating in Jesus, who “came into the universe to save sinners,” as Augustine put it.

“To him my soul confesses, and he heals it, since it sinned against him,” he writes. The simplicity of a sinner saved by grace is put on shining display in Confessions.

Augustine’s prayers and confessions refuted many of the ideas that had facilitated my own deconstruction. I’d later learn that Augustine was particularly passionate about exposing false versions of Christianity. In short, Augustine, my brother, helped lead me home. And he did it all through the art of confession.

Augustine begins the book by confessing a question. Referencing Psalm 145:3, he asks, “Can any praise be worthy of the Lord’s majesty?” He follows that with confessing praise: “How magnificent his strength! How inscrutable his wisdom!” Next he confesses a theological observation: “Man is one of your creatures, Lord, and his instinct is to praise you.” This is the foundation he lays for what has become one of Confession’s most quoted sentiments: “Thou hast formed us for thyself and our hearts are restless til they rest in thee” (Pilkington). Finally, Augustine confesses a prayer, “I shall look for you, Lord, by praying to you and as I pray I shall believe in you.”

In the sacred act of confession healing leads to wholeness and maturity, and provides a solid foundation upon which to build a right understanding of our God.

Like the rest of us, Augustine’s experiences, relationships, and wounds shaped his thoughts. But the depth of his brokenness makes his confessions all the more relevant and meaningful. In this book I encountered a man obsessed with God. He does everything in his power to rid himself of anything that would hinder his knowledge of and relationship with God. His honesty is shocking at times. That’s an example I want to follow. That’s an example every Christian should follow.

In Confessions, the African bishop taught me the beauty of bringing all my hopes, dreams, thoughts, sins, and secrets to my heavenly Father—warts and all. In the sacred act of confession healing leads to wholeness and maturity, and provides a solid foundation on which to build a right understanding of our God.

Alisa Childers is an American singer and songwriter who writes at alisachilders.com, an apologetics blog for doubting Christians and honest skeptics.