Knowing a friend well for a long time provides some breathtaking opportunities to see God work. Closely watching someone made in God’s image walk with the Lord over years—tested, tempted, stumbling, reconciling, and rising to praise—can give us incredible glimpses into God’s grace and goodness.

In fact, as Tim Keller notes, if we don’t take opportunities to listen to others’ stories—and to share our own—we run the risk of misappropriating the glory:

Too often we stay silent about his saving actions in our own histories. We might think that keeping quiet about such things is modesty but its effect is the opposite. It allows others to believe that we have overcome our problems and lived our lives in our own strength. 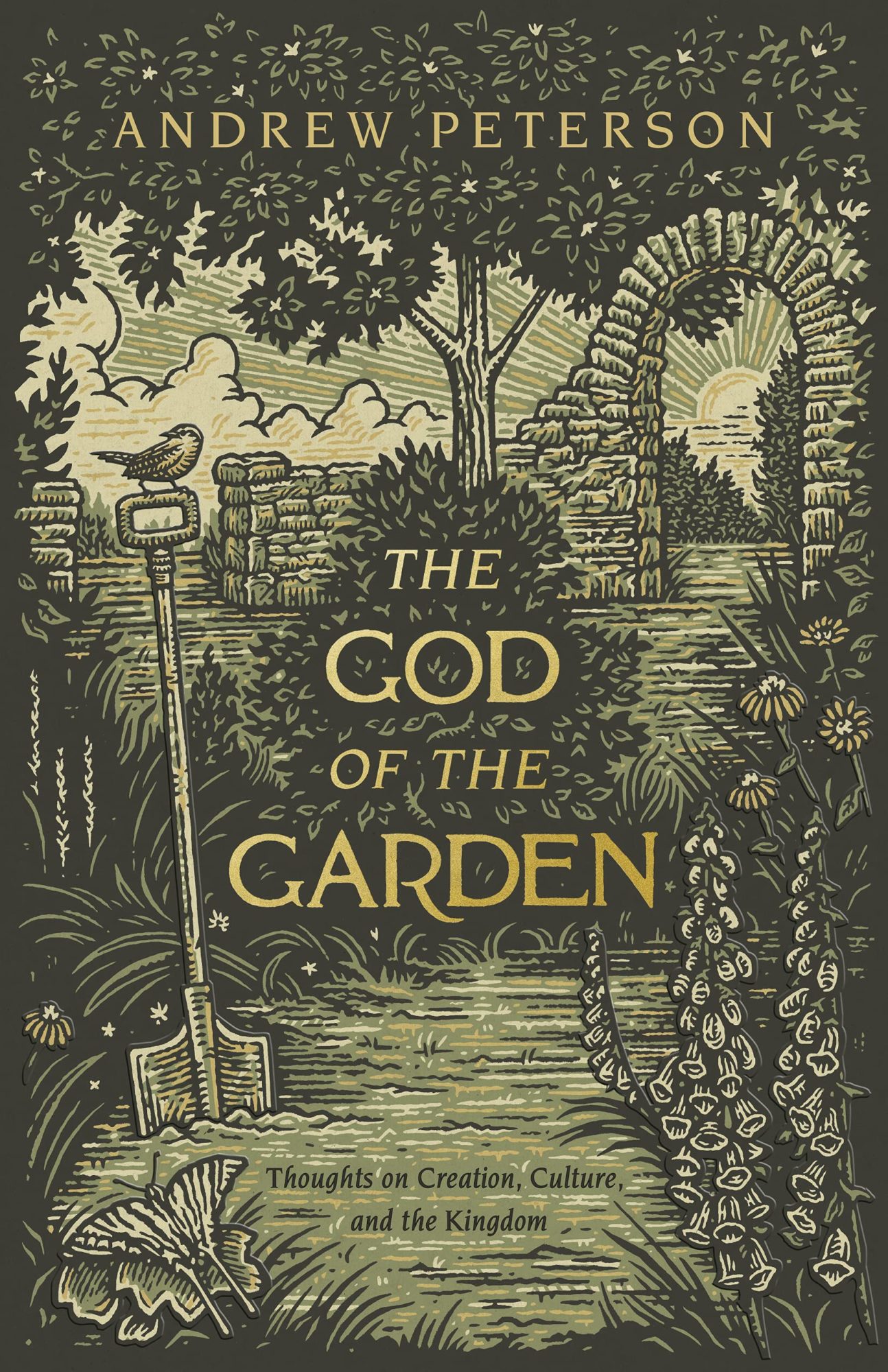 The God of the Garden: Thoughts on Creation, Culture, and the Kingdom

The God of the Garden: Thoughts on Creation, Culture, and the Kingdom

There’s a strong biblical connection between people and trees. They both come from dirt. They’re both told to bear fruit. In fact, arboreal language is so often applied to humans that it’s easy to miss, whether we’re talking about family trees, passing along our seed, cutting someone off like a branch, being rooted to a place, or bearing the fruit of the Spirit. It’s hard to deny that trees mean something, theologically speaking.

This book is in many ways a memoir, but it’s also an attempt to wake up the reader to the glory of God shining through his creation. One of the first commands to Adam and Eve was to “work and keep” the garden. Award-winning author and songwriter Andrew Peterson, being as honest as possible, shares a story of childhood, grief, redemption, and peace, by walking through a forest of memories: “I trust that by telling my story, you’ll encounter yours. Hopefully, like me, you’ll see that the God of the Garden is and has always been present, working and keeping what he loves.” Sometimes he plants, sometimes he prunes, but in his goodness he intends to reap a harvest of righteousness.

Andrew Peterson’s new memoir, The God of the Garden: Thoughts on Creation, Culture, and the Kingdom, tells his story of longing for home and for Eden, and of how God has met him while he searched. It’s a testimony to God’s faithfulness in one man’s life over decades.

Peterson is an award-winning Christian singer-songwriter and the author of The Wingfeather Saga and Adorning the Dark. Like Peterson himself, The God of the Garden is difficult to categorize. Reading this book feels like sitting down with your brother over dinner while he tells you what he’s been thinking about lately and pulls back the curtain on old stories: Remember the time when Dad did that thing? We thought this was what was going on, but now I know it was actually something different. He shares about his own life and struggles and the stories behind several of his more personal songs—stories that provide an honest glimpse into one man’s exercise of giving his past and his future to God.

Throughout his career, one of the standout features of Peterson’s songs has been the way he writes so compellingly about both the loss of innocence and the goodness of grace. A significant part of The God of the Garden chronicles Peterson’s journey of letting God redeem his past.

An early move from small-town Illinois to small-town central Florida created a divide in his story between the innocence of an early childhood spent in golden wheat fields and the darkness of an adolescence spent in a swampland where the trees were full of roaches. “I had been plucked out of a Norman Rockwell painting,” he writes, “and plunged into the dark heart of a Flannery O’Connor novel” (85). He met darkness inside and around himself in Florida, and it haunted him (92).

God redeems that childhood darkness, not by covering or ignoring hard things but by revealing beauty in unexpected places.

God redeems that childhood darkness, not by covering or ignoring hard things but by revealing beauty in unexpected places. The Lord was working even in the gloom. Peterson’s book takes us through his search for redemption, which he admits was intimidating: “I’m not exaggerating when I say that I was terrified” (19). I won’t spoil the beauty of Peterson’s telling of the story about how he made his peace with Florida by way of a book written for children, but his discoveries led him to the conclusion that it’s worth taking the risk to hunt for the truth. He writes, “Going back may unearth bones, or it may unearth treasure. Don’t be afraid” (21), and later that “it is only in hindsight that we see the broad, upwelling green of springtime as an explosion of life. Look back! He was always coming, always already there” (187).

For all its examples of seeing God’s faithfulness and goodness, one of the more remarkable features of The God of the Garden is its acknowledgment that there’s a lot of darkness in our stories where God’s presence is not discernable.

For me, the most compelling chapter of the book describes Peterson’s multiyear experience of depression. It culminated with him crying in a janitor’s closet at a church in North Carolina when he was supposed to be preparing for a show. He lay on the floor for hours, missing the sound check and numerous calls from his band who were looking for him, only to emerge five minutes before showtime and go through with the set.

While he was still working through the depression, Peterson started to write a song about the experience. “I’m so tired of this game, of these songs, of the road / I’m already ashamed of the line I just wrote / But it’s true and it feels like I can’t sing a note / And the rain keeps falling down” (114). At the time, he couldn’t make it any further than that. There just didn’t seem to be anything good to say about where he was or any hope things would improve.

Later, Peterson and his daughter went out to plant some seeds in their garden. “Gardening,” Peterson notes, “is, fundamentally, an act of hope” (118). Seeing the seeds go into the ground—buried under the earth, drenched in rain, and risen again—helped him to finish the song. “My daughter and I put the seeds in the dirt / And every day now we’ve been watching the earth / For a sign that this death will give way to a birth / And the rain keeps falling / Down on the soil where the sorrow is laid / And the secret of life is igniting the grave / And I’m dying to live, but I’m learning to wait / And the rain keeps falling down” (116). I love this story for the way it shows one example of walking faithfully when there isn’t a happy ending in sight. As Job said, “Though he slay me, yet I will hope in him” (Job 13:15).

Ultimately, Peterson’s story is not about him: “And I will bear witness,” he writes, “I will tell of his deeds” (189).

Andrew Peterson says writing is like putting on scuba gear and diving down to find the source of the trouble. But the whole point is to drag it back to the surface so you can look at it, do a forensic test, and then publish an article. “Here’s what I found, folks. Maybe it’ll help you in your own deep dive.” (105)

For many readers, this book could provide exactly that kind of help. Hearing the testimony of someone who has seen God’s faithfulness over time can give us the courage to walk through our own searches for home.

Hearing the testimony of someone who has seen God’s faithfulness over time can give us the courage to walk through our own searches for home.

Another reason I love Andrew Peterson’s story about that day in the closet in North Carolina is that, even though it ends without Peterson seeing the fruit, life and joy bloomed from the seeds he planted in the dirt. I have a dear friend whom I have known for decades. She’s pretty sure that show in North Carolina was the one she attended with her family in their very darkest season, and she’ll remember it with profound joy for the rest of her life.

I’m thankful that Andrew walked out on that stage and was willing to tell a hard but hopeful story without a tidy ending. It’s fascinating to follow the vine back to the dirt and to see God working all along the way. The seeds sprouted in my friend’s life, and now I enjoy the aroma of that fruit too.

We can all bear witness, even when we can’t see the fruit yet.