When I glimpse the well-worn spine of The Hiding Place on my bookshelf, I always think first of the fleas and the horror of human beings forced to sleep in flea-infested straw bedding in a concentration camp. And then I remember with amazement and deep conviction the prayer whispered on that straw by Betsie ten Boom and recalled by her sister Corrie: “Thank you, God, for the fleas.”

The first time I read The Hiding Place, I was in my mid-20s and, after a lifetime of assigned reading, was rediscovering the joy of reading for pleasure. Drawn to biographies of faithful Christians, I couldn’t devour them fast enough. I went to these books in search of worlds and experiences outside my own from which to mine wisdom. I gobbled up books such as Peace Child, Evidence Not Seen, A Chance to Die, Shadow of the Almighty, Surprised by Joy, Living Sacrifice, and Faithful Women and Their Extraordinary God. But I returned over and over again to Corrie ten Boom and the Beje in Holland, her jail cell, and the flea-ridden bunk she shared with her sister in Ravensbruck, deep in the cold, darkened heart of Nazi Germany. 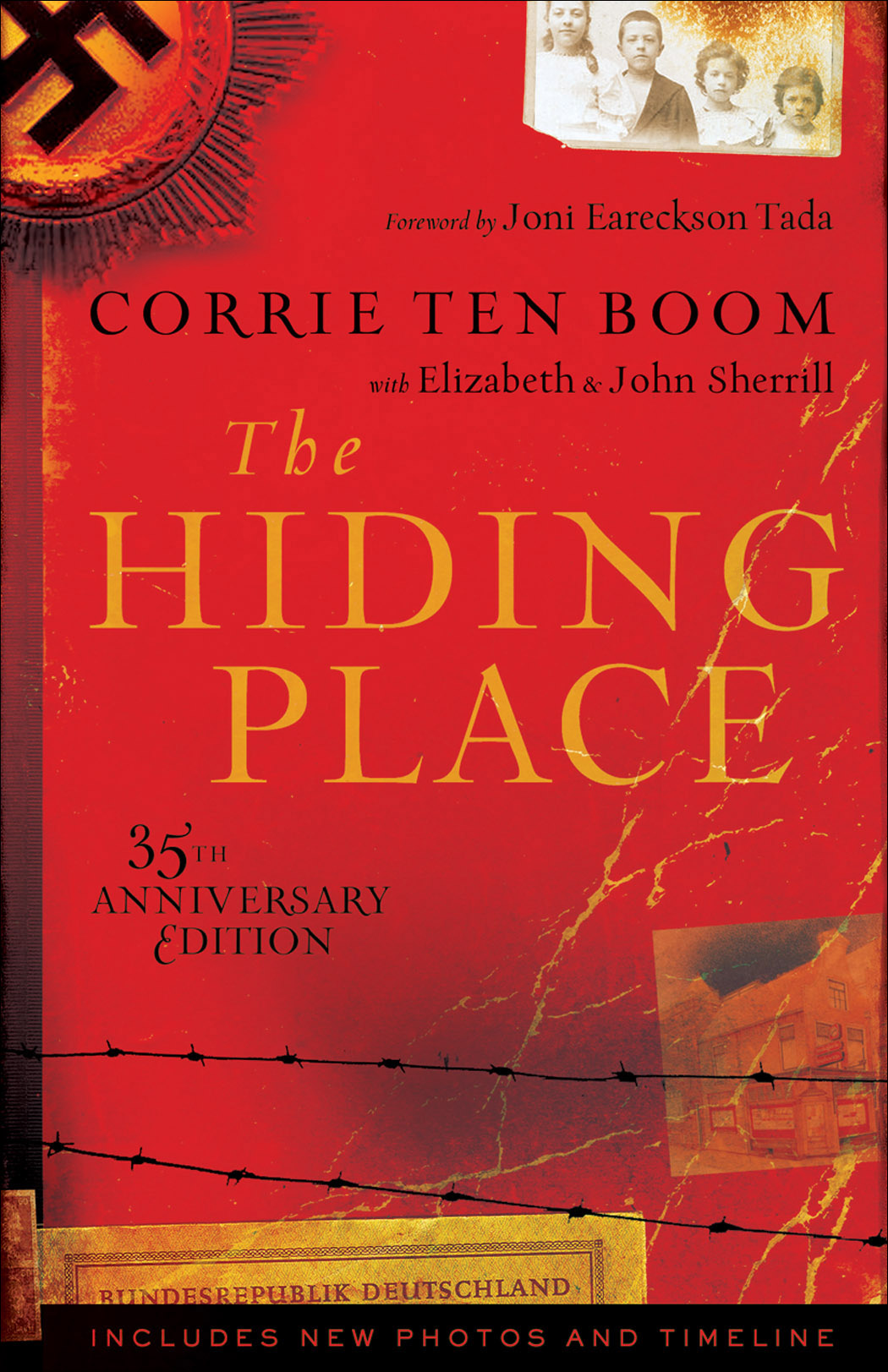 Corrie ten Boom was a Dutch watchmaker who became a heroine of the Resistance, a survivor of Hitler’s concentration camps, and one of the most remarkable evangelists of the 20th century. In World War II she and her family risked their lives to help Jews and underground workers escape from the Nazis, and for their work they were tested in the infamous Nazi death camps. Only Corrie among her family survived to tell the story of how faith ultimately triumphs over evil. Here is the riveting account of how Corrie and her family were able to save many Jews.

Corrie’s memoir begins happily enough as she recalls her home, work, and family life in Holland. A cloud hangs over her telling, however, because as all students of history know, war looms on the horizon. When Nazi Germany invades and occupies Holland, Corrie notes small and confounding changes around her: stars of David appearing on passersby, windows of Jewish businesses broken by rocks, ugly words appearing on synagogue walls. Eventually Corrie and her family notice Jewish neighbors disappearing—to where, they aren’t sure—so they begin hiding Jews in their home and working with an underground network to spirit them to safety.

If Scripture sustained these women in the darkest of places, surely it’s our sustenance as we wait for our own darkness to end.

Corrie, her father (Casper), and her sister (Betsie) are eventually betrayed by a fellow Dutchman, arrested, and imprisoned. The two women are ultimately transferred to Ravensbruck, a German concentration camp. While in the camp, bedded down with the fleas, sickly Betsie shares a post-war vision with Corrie: She must tell what she’s seen—not merely the brutality but also how the love and forgiveness found in Christ surpasses the evil and hate of the world. Corrie must tell, Betsie implores, how God was there among them in their deepest suffering.

Betsie doesn’t live to see the reality of her vision, but Corrie does. She’s released from the concentration camp based, she’d later discover, on a clerical error. This divinely appointed clerical error set her on a trek all over the world to proclaim what she’d seen and experienced—a story of God’s faithfulness during some of the worst suffering humanity could invent.

As a young woman, I was a grateful recipient of Corrie’s story. I needed her honesty as she attempted to reconcile faith with suffering. When Betsie thanked God for the fleas, I was almost repulsed. I resonated more with Corrie than Betsie when Corrie said, “Betsie, there’s no way even God can make me grateful for a flea.” When Betsie expressed compassion for the Nazi guards, earnestly praying for souls hardened by hate, I stood with Corrie on the opposite side, uncertain if forgiveness could ever come. But through certain circumstances that revealed God’s goodness, God did make Corrie grateful for the fleas. And when, after the war, a former guard in her barracks extended a hand, asking for forgiveness, Corrie chose to offer it despite her feelings.

As I grew older, I returned to these examples as I myself faced “fleas” and situations where I knew to obey God meant forgiving those who had hurt me, albeit in situations much less severe than what Corrie and millions of others endured in concentration camps during World War II. Because Corrie’s faith was accompanied by obedience, it was as if she came alongside me as one of the “great cloud of witnesses” mentioned in Hebrews 11 and said, “Follow me as I follow Christ.” She showed me that the light of God could always be found, no matter the darkness.

The truth of the gospel stretches far beyond our current generation (and today’s Twitter squabbles), far into the depths of our human darkness and need, and far into the practice of how we live among our neighbors.

I keep returning to the pages of The Hiding Place, each time amid different circumstances, and yet I find it as relevant for today as it was when it was published almost 50 years ago. In fact, this is a book for our time, because it reminds us that the truth of the gospel stretches far beyond our current generation (and today’s Twitter squabbles), far into the depths of our human darkness and need, and far into the practice of how we live among our neighbors.

We need Corrie and Betsie’s examples of actually living what we say we believe, remembering that faith without works is dead. And it seems what we most need now is courageous love―seeking to do for our neighbors what Christ has done for us: initiating, forgiving, and sacrificing. Corrie warns of what impedes us from what she herself experienced:

I saw that stony indifference to others was the most fatal disease of the concentration camp. I felt it spread to myself: how could one survive if one kept on feeling? . . . It was better to narrow the mind to one’s own need, not to see, not to think. (234)

We too must fight apathy by choosing to see our neighbors and think and look beyond ourselves.

Power of the Word

We also need to hear from a woman starved of freedom, food, and family that what kept her alive was a contraband Bible she miraculously kept hidden throughout her ordeal. Corrie describes “gulping” the entire Gospels in one sitting and “living” in the truths of the Word as if they were written for her exact situation. In a flea-ridden bunkhouse, so filthy that no guard would enter, she and Betsie would open the Bible and read it aloud, waiting as different voices translated the life-giving words into German, Polish, and French:

Like waifs clustered around a blazing fire, we gathered about it, holding out our hearts to its warmth and light. The blacker the night around us grew, the brighter and truer and more beautiful burned the word of God. . . . I would look about us as Betsie read, watching the light leap from face to face. More than conquerors. . . . It was not a wish. It was a fact. We knew it, we experienced it minute by minute—poor, hated, hungry. We are more than conquerors. Not “we shall be.” We are! (206)

If Scripture sustained these women in the darkest of places, surely it’s our sustenance as we wait for our own darkness to end. In our world full of ideas, may we cherish and “gulp” the life-giving words just as Corrie and Betsie did.

I certainly will keep returning to The Hiding Place again and again, learning from Corrie and Betsie, and remembering why I can thank God in any situation, even if it involves fleas.

Christine Hoover is a pastor’s wife, mom of three boys, host of the “By Faith” podcast, and author of several books. Her latest offering is With All Your Heart: Living Joyfully Through Allegiance to King Jesus. Previous books include Messy Beautiful Friendship and Searching for Spring. Originally from Texas, she and her family live in Charlottesville, Virginia, where they planted a church in 2008. Find Christine at her home online.

2 Semler’s ‘Preacher’s Kid’ and the Limits of Inclusion

3 ‘Progressive’ Christianity: Even Shallower Than the Evangelical Faith I Left

Church Small Talk Was More Important Than I Thought

What Did James Mean By, ‘You Do Not Have, Because You Do Not Ask’?