Philip and Carol Zaleski drew me into a 700-page book in less than six pages. This husband and wife team—Philip is an author of several books and Carol is professor of world religions at Smith College in Northampton, Massachusetts—examine two of the most famous Inklings and two of their most eager partners in The Fellowship: The Literary Lives of the Inklings: J. R. R. Tolkien, C. S. Lewis, Owen Barfield, Charles Williams. Their description of Oxford, with its “cloisters of learning” rising up from “traffic-clogged streets,” establishes one so firmly in the world of the Inklings that any attempt to dislodge oneself would require mental gymnastics.

Then, as a now, one was tempted to fantasize one’s surroundings as a Camelot of intellectual knight-errantry or an Eden of serene contemplation. Then, as now, there was bound to be disappointment. (6)

Their perspective on the famous English city—sympathetic, respectful, but not reverential—offers a very decent approximation of their approach to the Inklings themselves. The Fellowship is not a hagiography. Its subjects—J. R. R. Tolkien and C. S. Lewis, with the less celebrated but still remarkable Owen Barfield and Charles Williams—were great men, not gods. Approach them like gods and, as with Oxford, you will be disappointed.

J. R. R. Tolkien and C. S. Lewis are, of course, well known. They need no introduction from me. But who was this Barfield fellow? And what about Williams? Arthur Owen Barfield (1898–1997) was a philologist, novelist, poet, gymnast, and philosopher, best known for Poetic Diction: A Study in Meaning and History in English Words. The latter, published in 1926, is not so much a history of the English language as it is an attempt to understand how words capture history—how, as Barfield himself put it, “words may be made to disgorge the past that is bottled up inside them.” He was one of Lewis’s earliest friends, and the latter’s favorite sparring partner.

Charles Williams (1886–1945), on the other hand, is something of an enigma. Remembered today for his “supernatural shockers”—most notably Descent Into Hell and All Hallow’s Eve—he lacked the sturdy, beef-and-potatoes quality of his fellows. A devout Anglican who dabbled in magic, a (technically) faithful husband with a “platonic harem” of admiring women,  Williams was an unsettling mass of eccentricities and contradictions who alternately dazzled and stumped those who knew him. “I think he was a man of unusual genius,” wrote T. S. Eliot, “and I regard his work as important. But it has an importance of a kind not easy to describe.”

It remains difficult to overstate the impact these extraordinary storytellers had on the world around them and on subsequent generations. This is especially true of Lewis; and to a greater extent, at least in the realm of fantasy, Tolkien. Sir Terry Pratchett sums it up memorably in A Slip of the Keyboard:

Tolkien has become a sort of mountain, appearing in all subsequent fantasy in the way that Mt. Fuji appears so often in Japanese prints. Sometimes it’s big and up close. Sometimes it’s a shape on the horizon. Sometimes it’s not there at all, which means that the artist either has made a deliberate decision against the mountain, which is interesting in itself, or is in fact standing on Mt. Fuji. (112)

The Zaleskis strike a nice balance in their treatment of the Inklings’ Christianity—neither downplaying nor overemphasizing it. 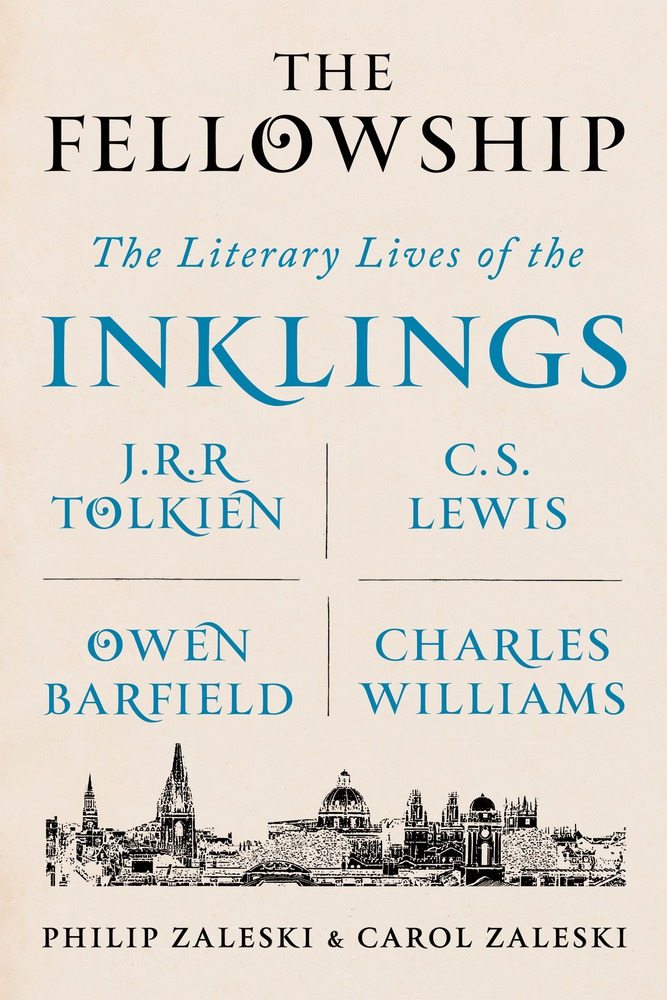 It would be a mistake to label them, as did one early biographer, “the Oxford Christians” and to presume that this sufficed. This would be tantamount, as Warnie Lewis complained the moment the term arose, to saying that the Inklings were no more than “an organized group for the propagation of Christianity.” Nonetheless, the Inklings were unmistakably Christians in Oxford, and this plays no small part in their cultural significance. (7)

Two simple, important, often overlooked lessons stand out from this book. First, no one writes in a vacuum. The Inklings were men like us, influenced in varying degrees and ways by family, faith, time, and place. The shapers themselves were shaped—a fact the Zaleskis understand, and spend no inconsiderable amount of time grappling with. Comprehending World War I’s influence on the development of The Lord of the Rings, for example, lends the story even greater emotional heft, for one sees “in its account of hobbits battling ultimate evil in a landscape of fantastic redoubts and talking trees, the achievements of ordinary Tommies and Doughboys among the barbed wire, rats, mud, and machine gun fusillades of rural France” (124).

Second, it’s been a long time since I’ve seen such a warm, compelling portrait of male friendship. The camaraderie between these men was not of ancillary consequence: it was central. It sharpened them. It made them who they were. Lewis would not be Lewis without Barfield or Tolkien. Barfield would not be Barfield without Williams. Any attempt to understand them (or the books they wrote) apart from the love they bore for one another is bound to come up short.

The Inklings were, to a man—and they were all men—comrades who had been touched by war, who viewed life through the lens of war, yet who looked for hope and found it, in fellowship, where so many other modern writers and intellectuals saw only broken narratives, disfigurement, and despair. (9)

Truly, The Fellowship is the story of four famous authors and their literary lives. But it is more than that. It’s the story of their friendship.

Corey Poff is a redeemed sinner, an avid reader, and a web developer. He blogs at the Ink Slinger, and has also written for MovieByte and Torrey Gazette. You can follow him on Twitter.