It’s one of my favorite lines from The Simpsons. Homer is having a rough Christmas and is seeking solace at the neighborhood tavern. Trying to sympathize with his forlorn friend, Moe the bartender explains what has gone wrong. “You know what I blame this on the breakdown of?” Moe asks. “Society.” Of course. What problems cannot be blamed on something as nebulous and inarguable as the breakdown of society? 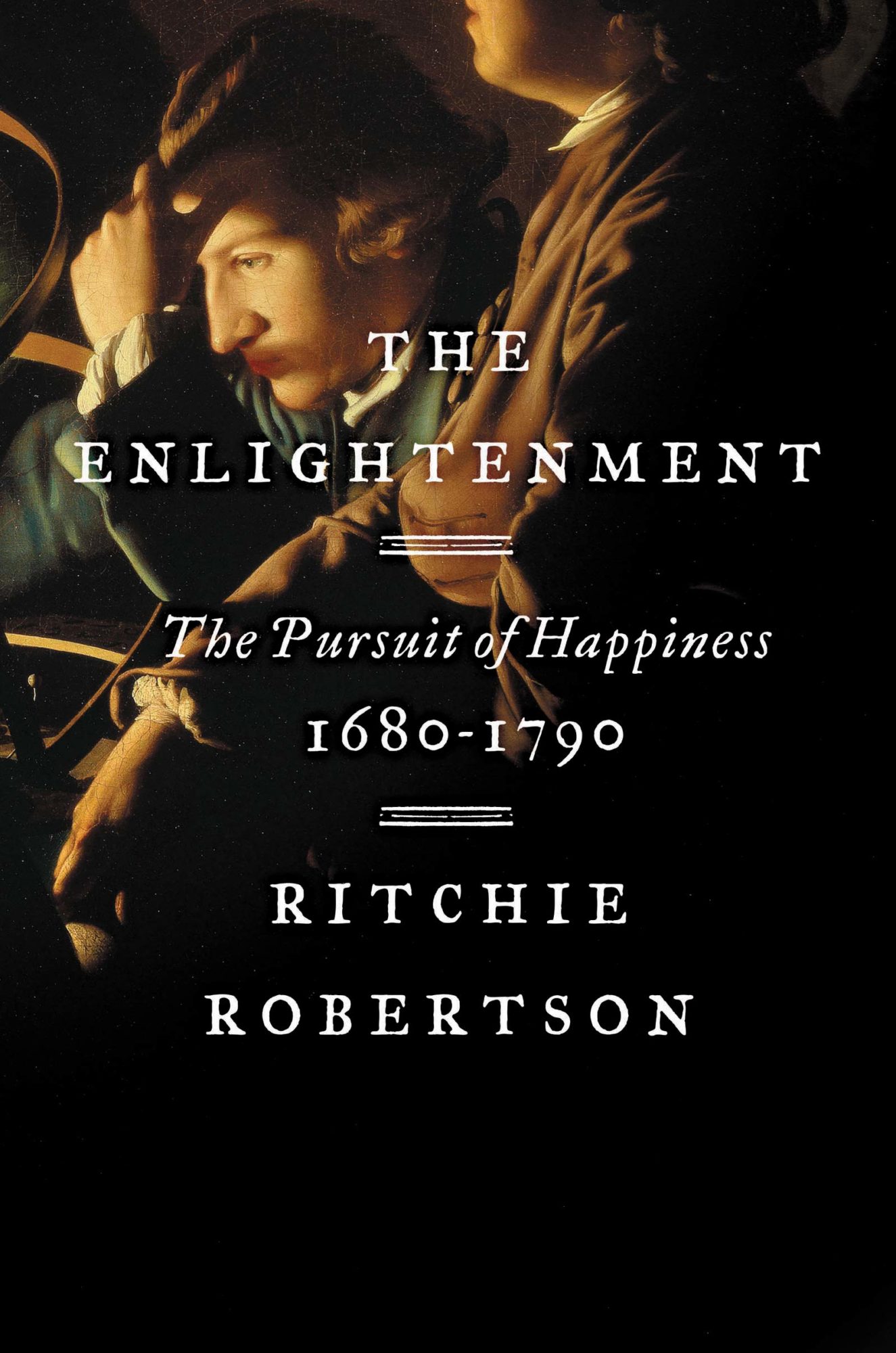 One of the formative periods of European and world history, the Enlightenment is the fountainhead of modern secular Western values: religious tolerance, freedom of thought, speech, and the press, rationality, and evidence-based argument. Yet why, over 300 years after it began, is the Enlightenment so profoundly misunderstood as controversial, the expression of soulless calculation? The answer may be that, to an extraordinary extent, we have accepted the account of the Enlightenment given by its conservative enemies: that enlightenment necessarily implied hostility to religion or support for an unfettered free market, or that this was “the best of all possible worlds.” Ritchie Robertson goes back into the “long eighteenth century,” from approximately 1680 to 1790, to reveal what this much-debated period was really about.

Robertson returns to the era’s original texts to show that, above all, the Enlightenment was really about increasing human happiness—in this world rather than the next—by promoting scientific inquiry and reasoned argument. Drawing on philosophy, theology, historiography and literature across the major western European languages, The Enlightenment is a master class in big-picture history about the foundational epoch of modern times.

As with any movement as wide and deep (and well-researched) as the Enlightenment, almost every claim about the movement is bound to be true of someone or some place or some idea. Many scholars debate whether there even was such a thing as the Enlightenment, choosing instead to speak of enlightenments—whether distinguished along ideological lines (e.g., radical, conservative, moderate, democratic, revolutionary) or along national lines (e.g., American, German, English, Scottish, French).

And yet, while there continues to be a push and pull between emphasizing unity versus diversity, most students of the Enlightenment agree there was something unique and momentous about the new ideas coming out of Europe and its colonies during the 18th century.

And what was that thing? According to Ritchie Robertson, a professor of German language and literature at Oxford, it was the pursuit of happiness—as he argues in his recent book The Enlightenment: The Pursuit of Happiness 1680–1790. While others might wish to emphasize science or progress instead of happiness, Robertson is surely right to question the cliché that the Enlightenment was “the age of reason.” To be sure, many voices stressed the importance of reason against blind trust in existing authorities (be it tradition, the monarchy, the church, or the Bible), but the Enlightenment was just as much the age of feeling, sympathy, and sensibility as it was an age of reason (xviii).

The Enlightenment was just as much the age of feeling, sympathy, and sensibility as it was an age of reason.

If we only think of “reason” when we think of the 18th century, we are not only too focused on the French version of the Enlightenment, we are too beholden to the view that puts a thick, high wall between reason and religion. The Enlightenment did not believe in a starry-eyed conception of progress (though it did believe improvements were being made on a variety of fronts), and it did not believe in the infallible power of a cold, lifeless logic. The Enlightenment, says Robertson, was about the slow vanquishing of fear and the pursuit of happiness in the here and now, despite the many imperfections of earthly life (1, 9).

Robertson’s work is an impressive feat of learning and lucidity. I’ve read many thick books on the Enlightenment, and Robertson’s is the easiest to navigate and employs the most accessible prose. Roberston has a knack for knowing when to slow down and provide a detailed analysis of Rousseau, and when to speed up and survey the introduction of inoculation and the building of hospitals.

The 14 chapters are arranged thematically—on everything from the scientific revolution to toleration to aesthetics—which allows the reader to dip in and out of various topics. With more than 100 pages of squint-print endnotes, Robertson displays a masterful command of Enlightenment ideas and history, moving seamlessly from an extended discussion of the anti-mercantilist views of Hume and Smith to recounting the number of streetlights in Paris and Hamburg. This is not a book about Enlightenment books (only), but a history of all that Enlighteners developed and discussed in the course of a century in Europe and America as they pursued improvements in society and progress in morals and the human condition.

For all of Robertson’s insights and general evenhandedness, his approach to Christianity often traffics in dismissive caricatures and theological misunderstandings. For example, Robertson thinks the Reformed emphasis on predestination means that assurance “could never be quite beyond doubt” (163). The Reformation emphasis on individual piety led to “extreme anxiety” and “self-tormenting examinations of conscience that are characteristic of Protestant life-writing” (205).

When he cites the Westminster Confession as encouraging believers to detect their “effectual calling,” even though they could never be assured of salvation (218), one wonders if Robertson has ever read the Confession all the way through. And when he claims that the practice of Christianity throughout history was never about a set of propositional beliefs, but about a way of life (201), one wonders if his understanding of Christianity only comes from liberal sources. Robertson even strains to discredit the Christian influence in abolishing slavery (766).

Time and again, it becomes clear Robertson cannot fathom that any intelligent person still believes in orthodox Christianity. Robertson speculates that the doctrine of hell appealed to many people because they were masochists, sadists, or enamored with fantasies of infernal punishment (217). He never entertains the idea that Christians were simply trying to be faithful to the Bible.

His approach to Christianity often traffics in dismissive caricatures and theological misunderstandings.

Robertson asserts confidently that Strauss proved the Gospels were myth (192), that Hume decisively undermined the possibility of miracles (193), and that to question evolution is not only a rejection of science but makes the creationist position absurd because creationists still “call in IT technicians rather than resorting to prayer when their computers break down” (213). It is a pity that in a work of such prodigious scholarship, Robertson so often slips out of his role as historian and makes definitive theological pronouncements as if they were as irrefutable as Newton’s discovery of gravity.

Like his predecessors in the field, Robertson has written a long book on the Enlightenment. Whether it is Peter Gay’s seminal two-volume history (The Rise of Modern Paganism and The Science of Freedom) totaling more than 1,200 pages, or Jonathan Israel’s three volumes (Radical Enlightenment, Enlightenment Contested, and Democratic Enlightenment) running more than 2,800 pages, or Richard Sher’s 800-page The Enlightenment and the Book, which is only about Scottish authors and their publishers, it seems that Enlightenment experts often have a lot to say about their subject. In Robertson’s case, he has succeeded in writing a volume that is in parts brilliant, breathtaking, and frustrating, but overall an extremely valuable guide to the Enlightenment’s creativity, controversy, and continuing influence.

In the end, we should appreciate Robertson’s qualified defense of the Enlightenment, especially as opposition to the Enlightenment increasingly looks a lot like hostility to Western civilization in general. For all its faults, we must not conceive of the Enlightenment as a “fanciful, unhistorical hybrid” composed of all the isms that contemporary critics dislike: positivism, capitalism, Fascism, rationalism, and empiricism (775).

At its best, the Enlightenment encouraged careful reasoning, unflinching investigation, and the kind of honest criticism that never shies away from self-criticism (780). While Christians will disagree with Robertson’s insistence that these pursuits must be done apart from God or revelation, we can happily affirm that in an age as stuffed with silly shibboleths and unfounded nostrums as ours, we need more reason and intellectual rigor in our lives, not less.