In case you’ve missed it somehow, there’s a debate (read: battle) raging in Western societies about sex and gender that shows no sign of abating. And though the parameters are different, the same debate rages on in evangelical circles.

EnGendered: God’s Gift of Gender Difference in Relationship is a recent addition to that debate. Sam Andreades was a pastor in New York City and now serves in Quarryville, Pennsylvania. He founded Higher Ground, a New York City ministry for those with unwanted same-sex attraction (SSA). His book is the fruit of these ministries and research on gender distinction in marriage. This research involved interviewing Christian men in successful “intergendered” (heterosexual) marriages who’d previously been in “monogendered” (same-sex) relationships, on the assumption they’d be able to identify what gender difference contributes to relationships. These interviews, as well as interactions with secular and Christian studies on marriage, form a large part of enGendered. Andreades’s central thesis is that emotional intimacy is necessary for a successful marriage, and that gender difference is necessary for emotional intimacy.

EnGendered presents a complementarian view of gender, which is expressed as men and women having “equality and asymmetry.” The equality exists because men and women are both made in the image of God. Andreades identifies three asymmetries which are based on Genesis 2: men are secure-making and women are rest-giving; men are responsibility-assuming and women promote men’s authority; men are mission-defining and women provide strong/divine help (133). These asymmetries are explored in a wide range of biblical texts.

Despite the freshness, however, of these categories, it’s not always clear how naturally they reflect the meaning and implications of Scripture. For instance, Jael and the woman of Thebez are offered as examples of women bringing rest to their homes by killing Israel’s enemies (89; cf. Judges 4:17–21; 9:53). But why did their actions bring rest rather than security? And what’s the exact difference between rest and security? Does Genesis 2 in fact say that Adam gave Eve security, or that Eve gave Adam rest?

Other questions are raised by Andreades’s approach. Is intimacy (or emotional intimacy) the biblical key to making marriages flourish (28–29), or is the key costly, self-giving, self-denying love (Eph. 5:21–33)? Do we display God’s “triune image when we get close to one another” (33), or when we selflessly love one another? Can “promotion” be used interchangeably with “submission” (112), or do wives accept and affirm their husband’s headship rather than promote it? Is it right to say women provide men with “divine” help simply because the word “helper” in Genesis 2:18 (ezer) is used of God’s help elsewhere (e.g., 76, 125, 127, 128, 129, 140)?

At points the book’s creative style also raises questions. For instance, in the first of seven dramatic retellings of biblical episodes—one imagining the creation of the cosmos—the second person of the Trinity says of the Father: “I turned to look at him, my one. He needed only to raise what you might call one of his eyebrows. It was enough. He did not approve” (18). This seems to suggest discord between the persons, whereas the scriptural testimony is that there is always perfect unity of purpose and will in the Godhead. 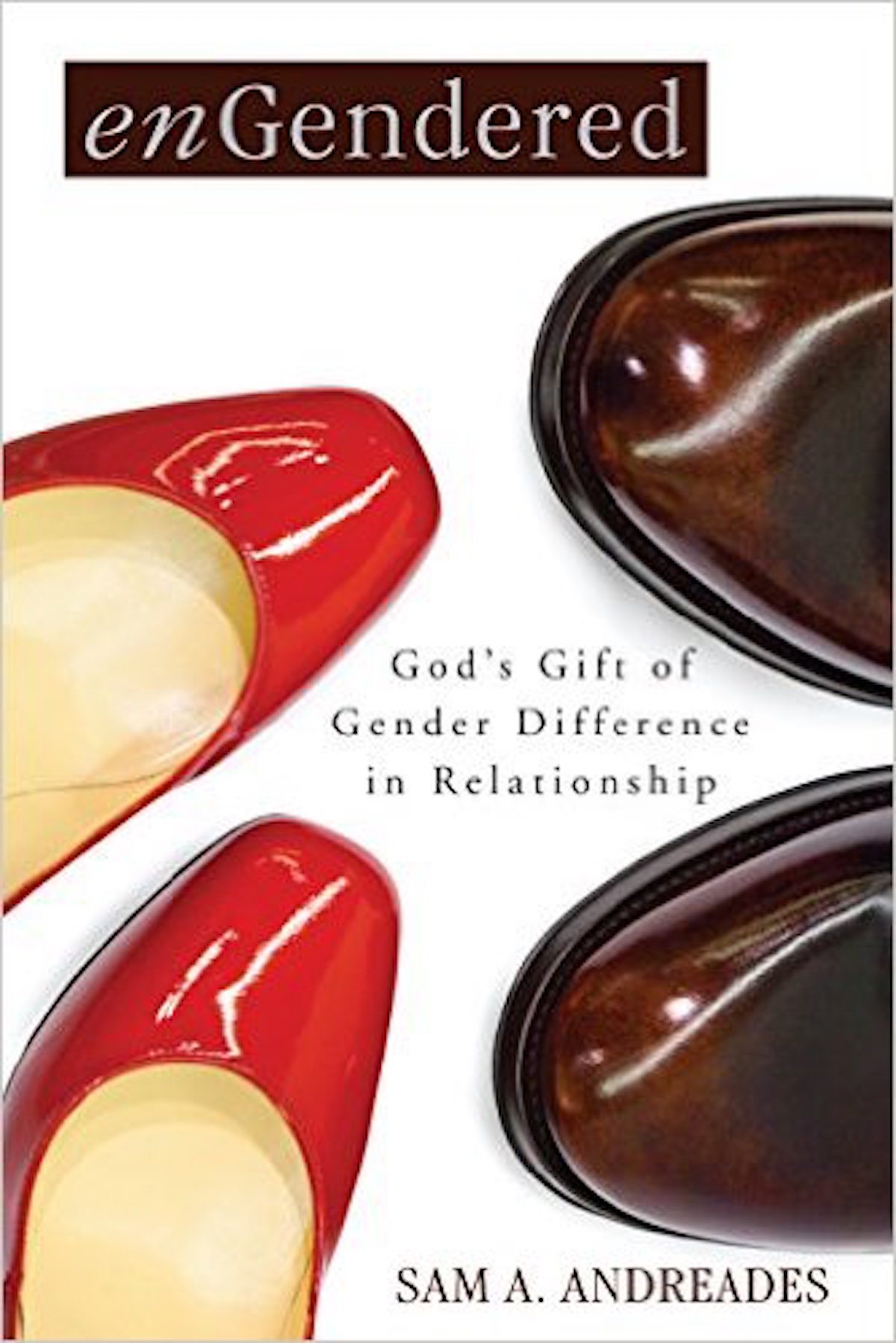 EnGendered also claims that “the persons of God are sometimes articulated as Father, Son, and Spirit” (30, emphasis added) and at many points these “familiar labels” are set aside in preference for the impersonal stand-alone terms “First,” “Second,” and “Third.” My difficulty here is that the names of Father, Son and Spirit are the names the living God has revealed to us in Scripture and through the lips of Jesus. So while it’s a mistake to project our human relationships back into the Godhead, I fear far more is lost than gained by replacing the personal names of God with ordinal numbers.

A further question concerns the operation of gender in the book. There is the helpful insight that the Bible has less to say about what a man or woman is than about what men and women should do: “it is clearer on action than on essence” (56). And the biblical injunctions concerning headship and submission are rightly limited to marriage and the exercise of authoritative teaching in the church (cf. 1 Cor. 14:33–35; Eph. 5:21–33; Col. 3:18–19; 1 Tim. 2:11–14; Titus 2:3–5; 1 Peter 3:1–7). But Andreades seems to suggest gender only comes into operation in close relationships with the other gender (140). So, for example, when a guy named Dan asked how to be a man at work, the answer given was that “from a manly standpoint, it didn’t matter what he did at work, since that is not where he was a man” (136).

Does this adequately capture the contribution of gender to our personhood? Even when we’re not in relationships with other people, we’re still in relationship with our Creator, and our sex and gender are part of who he made us to be (Gen. 1:27; 2:18–23; 2 Cor. 6:18). Females are born to be women, and males are born to be men, and this seems to entail more than just the bodies we’re given, the clothes we wear, or our different roles in the family and church, or even their sum.

Product of a Pastor’s Heart

That said, Andreades’s insight that culture provides the “clothes of gender” helpfully explains why expressions of masculinity or femininity differ from culture to culture. He also rightly urges us to avoid unthinking gender stereotypes and reminds us there are “outliers” who don’t easily fit the stereotypes and yet should feel welcome in our churches. Indeed, enGendered is written from a pastor’s heart. It’s full of real conversations and pastoral situations that have pushed Andreades to think and rethink, and to work harder at understanding people, himself, his family, and the shape of relationships.

EnGendered is a thought-provoking book, and while the close interaction with secular and Christian research on marriage is interesting, its real contribution is what it says about sexual orientation and same-sex marriage. Andreades shows it’s possible for men with a history of active same-sex attraction to enjoy successful marriages with women. This is testimony we don’t often hear, and in our current context it needs to be heard. There is no naïve optimism that all those with unwanted SSA should do this, but their testimony shows it’s possible for some.

In this regard, enGendered offers further confirmation that same-sex marriage will never be the same as intergendered marriage—even if it has the same name—since it will always lack the essential complementarity God intended for our good. Nevertheless, readers looking for a reliable treatment of the Bible’s teaching about men and women would be better served by looking at Andreas and Margaret Köstenberger’s God’s Design for Man and Women: A Biblical-Theological Survey [interview].

Claire Smith lives in Sydney, Australia, with her husband, Rob. They attend St. Andrew’s Anglican Cathedral. Claire is a writer and women’s Bible teacher. She has a PhD in New Testament (Moore College). Her books include God’s Good Design: What the Bible Really Says about Men and Women, (Matthias Media, 2019) and her doctoral dissertation, Pauline Communities as ‘Scholastic Communities’: A Study of the Vocabulary of ‘Teaching’ in 1 Corinthians, 1 and 2 Timothy and Titus, WUNT 2/335 (Tübingen: Mohr Siebeck, 2012).