Andrew Bartlett states the premise and purpose of his new book, Men and Women in Christ: Fresh Light from the Biblical Texts, at the outset:

Bible-based Christianity is threatened with a needless schism. Devout believers line up under rival banners emblazoned “complementarian” and “egalitarian.” . . . The purpose of this book is to encourage progress towards reducing and resolving these disagreements. (2)

While for Bartlett each side makes important contributions to our understanding of the Bible’s teaching on women and men, and “each side needs to move beyond the confines of the existing debate and closer to each other” (xxii), Bartlett clearly argues for an egalitarian position. 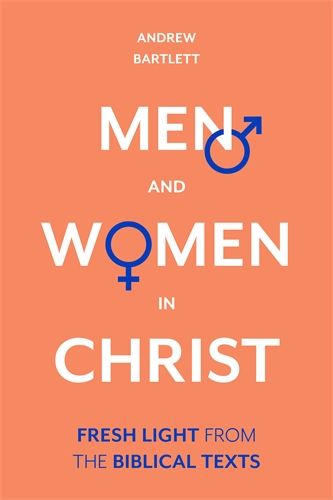 Men and Women in Christ: Fresh Light From The Biblical Texts

Men and Women in Christ: Fresh Light From The Biblical Texts

The debate between egalitarian and complementarian views on women in the church and in marriage continues to cause division among evangelical Christians. Many books on the subject are written from a firmly partisan point of view, whether complementarian or egalitarian. This one is different. Andrew Bartlett makes use of his experience as a judge and arbitrator in assessing the debate, with impartiality rather than advocacy (like a barrister). In a thorough but accessible analysis, he engages with exemplars of each view and with all the key biblical texts. He partly agrees and partly disagrees with both sides, and offers fresh insights into interpretation of the texts. He seeks progress towards healing of a sharp division

Bartlett is a lawyer, judge, and arbitrator, with a bachelor’s degree in theology. He and the publicity around the book draw particular attention to his legal expertise, with its need for impartial adjudication and a commitment to “go wherever the evidence and reasoned arguments lead” (xxi). He claims this is the approach he followed, and that—unlike biblical scholars and pastors wedded to their egalitarian or complementarian convictions—he was under “no obligation to support a particular viewpoint.”

Of course, this makes it difficult to review the book, since any objections can be dismissed as arising from loyalty to a particular position—a case of, “Well, you would say that, wouldn’t you!”

But I’m not convinced this narrative is right, and I don’t think it’s borne out in the book, where Bartlett acknowledges that neither side is a monolithic system of beliefs (10). Besides, as one reviewer—himself a lawyer-turned-pastor—cautions, we must “not be deceived into thinking that, because Bartlett is a lawyer with a theological degree, he will somehow be free from bias,” which will thus ensure objectivity.

Rather, Bartlett is simply another sincere Christian, committed to the inspiration and authority of Scripture, who is trying to discern the truth in this matter. Where his project differs is that he hopes to bring the two sides closer together. More on that later.

The book itself is long (400+ pages) and dense, but clearly written and easy to navigate, with summary points and questions at the end of each chapter.

Notwithstanding some original thoughts, the book advances familiar egalitarian claims. For example, it argues for mutual submission in marriage from Ephesians 5:21; it takes “head” (kephalē) to mean “source,” not “authority over” (1 Cor. 11:3; Eph. 5:22–23); it claims 1 Corinthians 14:34–35 is not original to the letter but added later; it claims the relevance of 1 Timothy 2:11–14 is limited to specific historical circumstances; it sees any relational order in Genesis between husbands and wives as a consequence of the fall. All these claims have been comprehensively rebutted by complementarian (and other) scholars many times over.

There are two main departures from the egalitarian position. First, Bartlett rejects the view that Galatians 3:28 does away with gender differences, and rightly understands Paul to be addressing our equal acceptance before God as “sons” in Christ (64). Second, rather than identical and interchangeable roles in marriage, he argues that Ephesians 5 presents asymmetrical responsibilities for husbands and wives: while there is to be mutual submission, the husband has first responsibility to sacrifice self (63).

While Bartlett has some helpful exegetical insights, not all are convincing. Neither is the claim sustainable that women have been considered innately inferior to men throughout church history. There are other concerns:

But there is a more significant difficulty with Bartlett’s overall argument, and it brings us back to Galatians 3:28. In egalitarian arguments, this verse typically functions to control the meaning of other texts. That is, it’s used to prevent interpretations of texts such as Ephesians 5, Colossians 3, or 1 Timothy 2 that distinguish between the roles of men and women—or at least prevent their present-day application.

Bartlett rejects this use of Galatians 3:28, but not the method. Instead, he uses 1 Corinthians 7:3–5 as the proof text to establish the equal authority of husband and wife.

There are two problems here.

First, the passage can’t bear the weight Bartlett puts on it. Paul’s comment about wives and husbands having authority over each other’s bodies isn’t a general statement about authority in marriage, but focuses on mutual sexual obligations in marriage. It also looks back to the limits of personal freedom (1 Cor. 6:12), the “one flesh” nature of sexual relations, the need to flee sexual immorality, and the call to glorify God with our bodies.

In fact, the “own body” focus of the authority on view in 7:4 is repeated for each spouse (idiou sōmatos) and means that, when it comes to sexual relations, your body belongs to your spouse. The mutual agreement on view in 7:5 arises from the same principle. Elsewhere in the chapter, it is equal agency in view, rather than equal authority. In short, Bartlett has extended the application of the text beyond its scope, taking what is true for part of the marriage relationship and applying it to the whole.

Second, Bartlett then uses the (limited) mutual or equal authority found in 1 Corinthians 7 to silence indications of ordered relationships in other texts. In doing so, he pits Scripture against Scripture.

The goal of Bartlett’s book is to achieve unity between “warring houses” (15). It’s a noble aim, and, I trust, one that all those who love Christ, his church, and his mission long for.

But my view is that Bartlett’s book is itself evidence this debate will continue—not out of misplaced loyalty to rival tribes or from unnecessary line-drawing over matters of indifference, but because God calls us to rightly handle the word of truth (2 Tim. 2:15), and because it matters to him how we conduct ourselves in his household (1 Tim. 3:15).

Claire Smith lives in Sydney, Australia, with her husband, Rob. They attend St. Andrew’s Anglican Cathedral. Claire is a writer and women’s Bible teacher. She has a PhD in New Testament (Moore College). Her books include God’s Good Design: What the Bible Really Says about Men and Women, (Matthias Media, 2019) and her doctoral dissertation, Pauline Communities as ‘Scholastic Communities’: A Study of the Vocabulary of ‘Teaching’ in 1 Corinthians, 1 and 2 Timothy and Titus, WUNT 2/335 (Tübingen: Mohr Siebeck, 2012).