In the movie The Matrix, just before Cypher betrays Morpheus and Neo to Agent Smith over dinner, he says, “I know this steak doesn’t exist. I know when I put it in my mouth, the Matrix is telling my brain that it is juicy and delicious. After nine years, do you know what I’ve realized? Ignorance is bliss.”

With his book, The End of the Christian Life: How Embracing Our Mortality Frees Us to Truly Live, author J. Todd Billings challenges us to toss away the forced ignorance of death’s reality and live the Christian life in the full light of death’s dark shadow. His thesis is that the “wound of death” ought to “remind us of who we are: beloved yet small and mortal children of God, bearing witness to the Lord of creation who will set things right on the final day” (11).

Todd Billings challenges us to toss away the forced ignorance of death’s reality and live the Christian life in the full light of death’s dark shadow.

Billings (ThD, Harvard University Divinity School) is both a professor of Reformed theology at Western Theological Seminary and a terminal cancer patient. His theological tradition and life enrich the book. The clarity and emotional depth of his writing strike me as somewhere between C. S. Lewis’s The Problem of Pain and A Grief Observed. Billings is clearly trying to make a theological point, yet he takes readers on an emotional rollercoaster which invites genuine personal reflection of “ache and joy . . . despair and hope” (19).

From the Pit to the Temple

The book is framed in rich Old Testament imagery, moving the reader from Sheol’s depths (the Lord’s apparent absence) to the temple (the Lord’s presence). Sheol is “a deep, miry pit, far away from light . . . a place of darkness, a prison for those silenced, cut off from life” (22). While Billings notes that Sheol is often interpreted to mean the grave or “the land of the dead, the biologically deceased” (22), he also points out that many described as being in Sheol aren’t actually dead (23–27). Death is a looming reality for all, and anyone who dares to open their eyes will awaken to find themselves in Sheol. 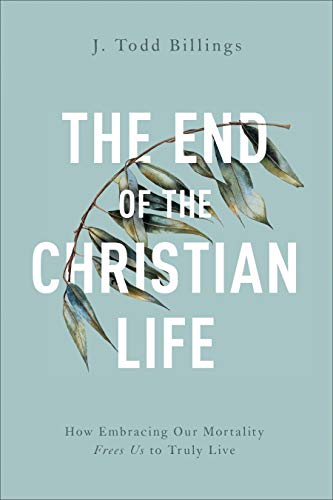 The End of the Christian Life: How Embracing Our Mortality Frees Us to Truly Live

The End of the Christian Life: How Embracing Our Mortality Frees Us to Truly Live

We’re all going to die. Yet in our medically advanced, technological age, many of us see death as a distant reality–something that happens only at the end of a long life or to other people.

In The End of the Christian Life, Todd Billings urges Christians to resist that view. Instead, he calls us to embrace our mortality in our daily life and faith. This is the journey of genuine discipleship, Billings says, following the crucified and resurrected Lord in a world of distraction and false hopes.

Billings utilizes this imagery to punctuate the New Testament reality summarized in Martin Luther’s famous formula, simul justus et peccator (Christians are simultaneously justified and sinful). Put another way, in Christ we’re free from sin’s penalty but not its presence. The wages of sin is still death, even for Christians (Rom. 6:23). Thus, it can be traumatic when we open our eyes to the reality of the pit within and around us “among the dead, we see that we cannot deliver ourselves” (47). In Christ, however, though we still walk through death’s shadowy valley, we can do so with the confidence of our deliverer with us (Ps. 23:4).

Billings wonders how some can be consigned to die “full of years,” while others die “of an unexpected disease [causing] oceans of hope to dry up so quickly” (61). His conclusion: “These unanswered questions point us to our need for a pioneer, a priest who knows our weaknesses, a Savior who has been to Sheol” (63).

Unfortunately, few of our churches have graveyards along the path to the entrance anymore. This historic practice forced worshipers both going to and coming from the “house of God” to be reminded of their “dustiness” in relation to their Maker. Instead, we’ve moved our dead to places “over there.” Despite what the preacher of Ecclesiastes says (Eccles. 7:2), we’ve determined it’s inconvenient for death to always be before us.

In Christ, though we still walk through death’s shadowy valley, we can do so with the confidence of our deliverer with us.

Denying death is “an engine that is central to human culture itself” (80), and Christians are some of the chief offenders! We can only be fully human when living “in relation to the Transcendent”; unfortunately, however, we’re prone to “make [our] actions the center of what’s happening in the world,” instead of the Lord (81, 88–89). Through our reluctance to embrace our mortality, we place our hope in “heroes” and what they promise—which are simply idols (89–92).

What About Dying Well?

Don Carson tells a story of his wife at a prayer meeting where prayer after prayer was offered for a woman to be miraculously healed. That is, until Carson’s wife prayed and asked God to give this woman the faith to die well. Billings probes the ancient Christian ars moriendi (the art of dying), and why we moderns often so bad at it (113–20).

His conclusion is that the American prosperity gospel has taken hold of our subconscious. We “assume God works according to only one script—that of healing and reviving” (129). Patients peruse treatments accordingly. Over and over, patients’ decisions are made on the theological ground that God only wants what’s good for them—and that never involves death. Yet as Billings rightly notes, it’s “not whether God can heal or perform miracles. . . . The issue is that the God of Scripture never promises [this type of prosperity]” (138).

Readers are forced to face Jesus’s question posed to Martha: do you believe that I am the resurrection and the life? (John 11:25–26). Whether through common grace or the miraculous, we expect God will prosper us now. But that’s not what we’ve been promised. Instead, we must place our only hope in life and death into the hands of the Resurrection himself—who was made perfect through suffering (Heb. 2:10).

Standing in awe of the potent strength of our God, we’re confronted with our own impotent frailty as his creatures. As Paul says, though, it’s our very weakness that most fully displays God’s power (2 Cor. 12:8–10). We’re small, Billings reminds us, and we must learn how to live that way (215). We, God’s people, have been drawn out of Sheol because our Savior, Jesus Christ, descended into it for us.

We, God’s people, have been drawn out of Sheol because our Savior, Jesus Christ, descended into it for us.

And now, “Christ the King uses crumbling, mortal temples as the place where the treasure of his presence dwells” (199). The tension of the Christian life is never resolved; instead, it’s exposed and embraced. With eyes wide open to the reality of our mortal end, the reader can join the “thundering, resounding harmony of the heavenly chorus” through union with Christ—even now, while limping in death’s dark shadow (207).

Matt Boga is the associate pastor at Reality Church of Stockton in California, where he lives with his wife and three children. Matt enjoys reading, building with his hands, and playing basketball. He writes at his website, and you can follow him on Twitter.