In the fall of 1978, in response to a controversy that had been mounting among evangelicals over the previous 25 years, a group of about 300 scholars and pastors gathered in a Chicago hotel seeking to clearly define the traditional understanding of inerrancy. The result of their collective effort was the the Chicago Statement on Biblical Inerrancy (CSBI)—a 5,000-word document that provided a theologically nuanced definition of the historic doctrine.

But that was 1978. Recent literature suggests (and numerous personal conversations confirm) that many evangelicals—especially the younger generation—have little or no knowledge of the CSBI. If you are among those who have never heard of the CSBI, Norman Geisler and William Roach, authors of Defending Inerrancy: Affirming the Accuracy of Scripture for a New Generation, will be happy to inform you. Geisler is a founding member of the International Council on Biblical Inerrancy, a small group that organized the Chicago summit in October 1978. Roach is part of the new generation of evangelicals who hope to renew the CSBI’s influence.

Soon after its launch, the CSBI enjoyed immediate influence among evangelicals, especially within the Southern Baptist Convention and the Evangelical Theological Society. Geisler and Roach, however, lament that some evangelicals seem to be relegating the CSBI to the past as an outmoded artifact. Certain professing evangelicals (and one evangelical-turned-agnostic) have recently published a host of writings that either explicitly reject the CSBI (or portions thereof) or affirm hermeneutical frameworks that undermine the doctrine of inerrancy as defined by the CSBI. So Geisler and Roach ask whether inerrancy as defined by the CSBI can be reaffirmed and defended by a new generation. In order to determine the answer this question, Geisler and Roach frame the rest of their book around two distinct sections: 1) The Recent Challenges to Inerrancy, and 2) A Reexamination of Inerrancy.

The Recent Challenges to Inerrancy

In the first of these two sections, Geisler and Roach investigate 10 noteworthy writers who have recently challenged the traditional view of inerrancy. There is much helpful insight in these chapters. Geisler and Roach answer these challenges with clear and reasoned arguments while demonstrating specifically where a given position departs from the CSBI. They target several recurring themes among those who depart from the traditional view of inerrancy, such as the charge that the historic defense of inerrancy “dies the death of a thousand qualifications,” or the notion that Scripture itself only supports partial inerrancy (for example, inerrancy only applies to redemptive material in the Bible).

There was, however, one major concern in this section. Although the authors are, on the whole, careful to present their argument against a particular theologian fairly and accurately, I am not sure they did so in every instance with Kevin Vanhoozer. In their discussion of Vanhoozer’s tendency to use “up-front genre decisions,” Geisler and Roach quote him at length (146). Geisler and Roach then respond to Vanhoozer’s statement with a section outlining the problems with making up-front genre decisions before interpreting a text. They do not, however, explain specifically what is wrong with Vanhoozer’s original statement. Taken at face value, Vanhoozer’s statement does not necessarily undermine inerrancy. He seems to be affirming the fact that among the various genres of Scripture, our definition of inerrancy must be nuanced in such a way so that it applies to Proverbs as well as Chronicles. 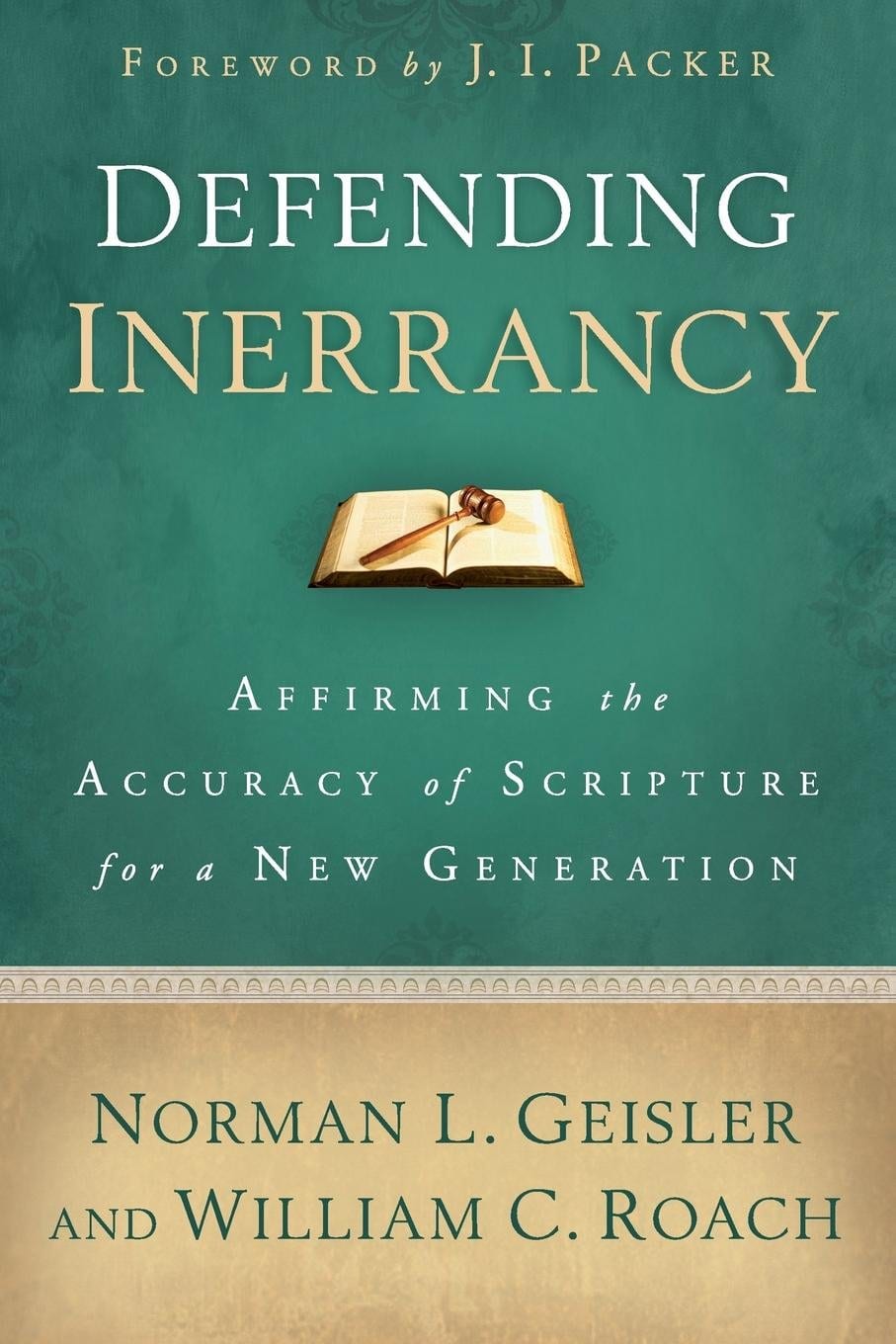 Defending Inerrancy: Affirming the Accuracy of Scripture for a New Generation

Defending Inerrancy: Affirming the Accuracy of Scripture for a New Generation

According to the authors, the doctrine of inerrancy has been standard, accepted teaching for more than 1,000 years. In 1978, the famous “Chicago Statement” on inerrancy was adopted by the Evangelical Theological Society, and for decades it has been the accepted conservative evangelical doctrine of the Scriptures. However, in recent years, some prominent evangelical authors have challenged this statement in their writings. Now eminent apologist and bestselling author Norman L. Geisler, who was one of the original drafters of the “Chicago Statement,” and his coauthor, William C. Roach, present a defense of the traditional understanding of inerrancy for a new generation of Christians

Similar problems can be found in Geisler and Roach’s representation of Vanhoozer on pages 148-149 and 272. Maybe subsequent statements made by Vanhoozer make clear what he meant or did not mean by his comments on genre and other issues. But a few texts provided in Defending Inerrancy do not seem to carry the weight Geisler and Roach suggest in their critiques. Perhaps more textual evidence from Vanhoozer in each case would have been helpful. Either way, the authors’ handling of Vanhoozer’s statements could have been improved. This is not to suggest that Geisler and Roach’s entire assessment of Vanhoozer is misguided, but only to submit that in some instances the authors could have enhanced their use of the material.

A Reexamination of Inerrancy

In the next major section of the book Geisler and Roach consider how the doctrine of inerrancy as defined by the CSBI relates to other foundational evangelical doctrines. They observe how wavering on inerrancy betrays problems elsewhere, such as departure from a classical view of God, a correspondence theory of truth, theistic realism, or a grammatical-historical approach to biblical interpretation.

Probably the most significant contribution here was the authors’ strong affirmation that God’s nature guarantees an error-free Bible. By his very nature “as a transcendent sovereign, all-powerful, all-knowing Being, God can guarantee in advance that there cannot be any errors in his revealed written Word” (226). By beginning their formal defense of inerrancy with a discussion of the nature of God, Geisler and Roach not only bind inerrancy to the doctrine of God, they also highlight the interdependent character of biblical doctrines. The authors rightly argue that our discussions about the nature of Scripture should never be relegated to the realm of bibliology. To separate our defense of inerrancy from a robust doctrine of God will tend to undermine our efforts before they get off the ground. I wonder how much we will only aggravate the current fracture among evangelicals with regard to inerrancy if we neglect to explicitly link our defense of Scripture with our understanding of God.

Document to Reassess and Refine

The bottom line for Geisler and Roach—and the foundational logic for the whole book—is found in a simple syllogism: 1) God cannot err; 2) The Bible is God’s Word; 3) Therefore, the Bible cannot contain error. Geisler and Roach labor to demonstrate that the CSBI provides weighty and sufficient nuance to this simple syllogism, taking into account all the biblical phenomena. Their conclusion: the definition of inerrancy provided in the CSBI can be amply defended historically, biblically, and theologically. Indeed, so sufficient is the CSBI that Geisler and Roach do not propose any changes, additions, or clarifications to the document.

Yet I contend that in light of contemporary developments, the CSBI would benefit from some added nuance. Greg Beale, in his recent work The Erosion of Inerrancy in Evangelicalism, suggests that some change in the wording of the exposition section of the CSBI would be helpful (see Erosion, 267n1). Gregg Allison, writing for Philosophia Christi in 1995, proposed that speech-act theory, rightly understood, could shed some positive light on our understanding of inerrancy (see “Speech Act Theory and Its Implications for the Doctrine of Inerrancy/Infallibilty of Scripture”). So, will we see a new muster of evangelical scholars and pastors gather to reassess and carefully refine the CSBI? Geisler and Roach do not say, but I trust their work in Defending Inerrancy will, at the very least, motivate generations young and old to reclaim the Chicago Statement as a clear and faithful expression of an historic and precious doctrine.