There’s a special place in my heart for books that dismantle false dichotomies.

And as Michael Horton points out in his foreword, Jeremy Treat’s The Crucified King: Atonement and Kingdom in Biblical and Systematic Theology deftly dispatches several, including Old Testament vs. New, Jesus vs. Paul, and biblical vs. systematic theology. But Treat mainly targets one false dichotomy that is alive and well in evangelical circles: the kingdom vs. the cross, God’s restored rule vs. Christ’s atoning death.

At both scholarly and popular levels the kingdom and the cross are too often pitted against each other. In the introduction, Treat—a pastor at Reality LA in Hollywood and adjunct professor at Biola—offers a number of reasons why, including the fallout from debates between those who emphasize one at the expense of the other and the post-Enlightenment splintering of biblical studies.

In response, Treat seeks to rightly relate kingdom and cross, describing their relationship through the lenses offered by both biblical and systematic theology. One of the key theses of the book emerges in the introduction: “The cross represents not only the great exchange (substitutionary atonement), but also the great transition (the eschatological turn of the ages)” (49). Chapter 1 traces the pattern of royal victory through atoning suffering that develops throughout the Old Testament, as seen, for example, in the protoevangelium (Gen. 3:15), covenant initiation, the exodus, the life of David, and the prophecies of Isaiah and Zechariah.

Against this backdrop chapter 2 provides a detailed study of the work of Isaiah’s suffering servant (Isa. 52:13–53:12), arguing that “the servant is the Davidic king who will bring about a new exodus and thereby establish God’s kingdom by means of his sacrificial suffering” (69). Chapter 3 offers a close reading of the kingdom-cross interplay in Mark, which itself is rooted in Isaiah’s new exodus. Treat argues that “the messianic mission culminates at Golgotha, where the crucified king establishes his kingdom by way of the cross” (110). Chapter 4 examines two other representative New Testament passages, Colossians 1:15–20 and Revelation 5:5–10, which present Jesus’ sacrificial death as the basis for his universal reign. And chapter 5 draws together and clarifies these biblical-theological threads. 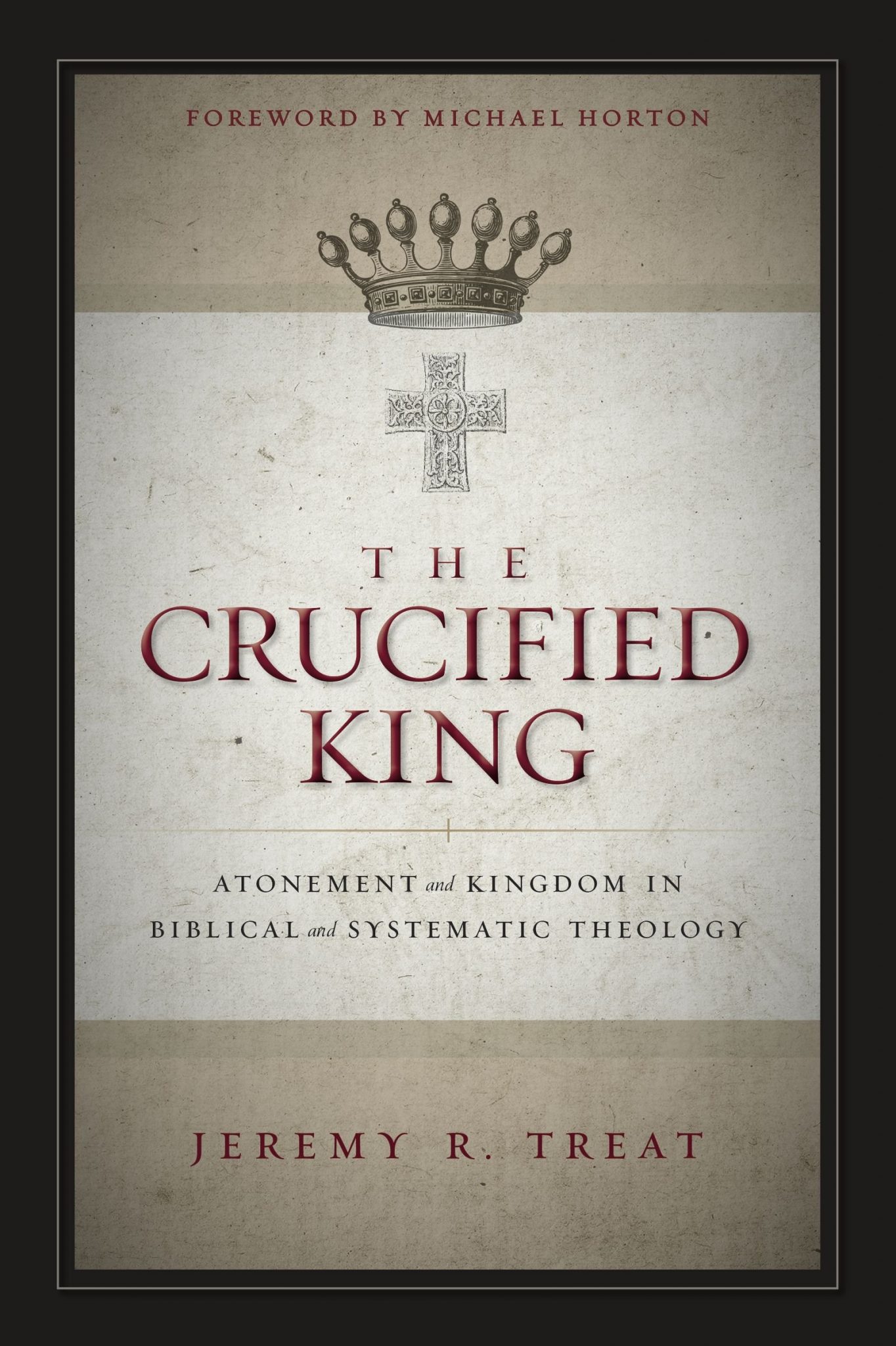 The Crucified King: Atonement and Kingdom in Biblical and Systematic Theology

The Crucified King: Atonement and Kingdom in Biblical and Systematic Theology

From chapter 6 through the end, the focus shifts to systematic theology, beginning by reconsidering Christ’s states of humiliation and exaltation and the threefold office of prophet, priest, and king. Regarding the former, Treat compellingly argues that these states are not strictly sequential. Instead, “the proper view is exaltation in humiliation within a broader progression of exaltation through humiliation” (156). Regarding Christ’s threefold office, Treat argues, again persuasively, that these three are not airtight categories that each correspond to different phases of Christ’s work. Drawing heavily on Calvin, Treat insists that the cross is as much a kingly and prophetic work as a priestly one (165–73).

Chapter 7 surveys the twin dangers of reductionism and relativism in atonement theology. Treat argues instead for an “expansive particularity” in which Christ’s saving work is viewed as multifaceted yet its various aspects have a certain integration, order, and rank. Building on this point, chapter 8 seeks to integrate what are often presented as mutually exclusive views of the cross: Christus Victor and penal substitution. Drawing particularly on Henri Blocher and Sinclair Ferguson, Treat argues for “Christus Victor through penal substitution.” In one of the book’s most constructive contributions, Treat demonstrates how Christ’s ministry undoes the works of Satan point by point, showing that “penal substitution directly addresses the root problem between God and humanity (wrath/guilt), whereas Christus Victor addresses the derivative problem of human bondage to Satan.” In other words, “the victory of the cross is dependent on the vicarious suffering of the Christ” (224).

Chapter 9 unpacks the cruciform shape of the kingdom. In critical dialogue with Jurgen Moltmann, Treat argues that “between Christ’s resurrection and return, the kingdom of God is hidden beneath the cross,” and is “advanced by taking up the cross and hidden to fallen eyes beneath the weakness and foolishness of the cross” (230). Chapter 10 wraps up with a few comments on the story and logic of redemption.

This is an especially important book for pastors. Internalizing this book’s arguments will help you discern how the cross truly is the hinge of the Bible’s storyline. It will help you preach Christ from all of Scripture because you see better how his work fulfills the kingdom pattern that develops throughout Scripture. Consider Treat’s twofold definition of the kingdom of God. First, “The design of God’s kingdom in creation: God’s reign through his servant-kings over creation.” Second, “The coming of God’s kingdom in redemption: God’s redemptive reign through Christ and his reconciled servant-kings over the new creation” (43). This is simply stated, but it elegantly weaves together a huge web of biblical teaching.

The same could be said for the whole book. This is the published version of Treat’s Wheaton PhD thesis, so there are plenty of footnotes and detailed arguments. Yet Treat’s prose is lean and lucid, punctuated with pithy summaries. Reading The Crucified King certainly takes work, but it’s just the kind of work those who preach God’s Word should love to do.

The heart of the book is summed up in Augustine’s saying, “He endured death as a lamb; he devoured it as a lion” (123). So take up and read—and rejoice in our crucified king.

Bobby Jamieson is an associate pastor of Capitol Hill Baptist Church in Washington, D.C. He is the author, most recently, of Jesus’ Death and Heavenly Offering in Hebrews (Cambridge University Press).

3 A Theology of Free Speech

5 Don’t Be That Bildad Guy