If your church has ever recited the Apostles’ Creed, you’re probably familiar with that awkward feeling you get when you come to the part that says “he descended into hell.” Numerous questions come to mind. For example:

And so on. Unanswered questions like these have led some Christians to simply remain silent when their congregation recites this part of the creed. Other churches have chosen to delete the phrase altogether. Indeed, no other line of the Apostles’ Creed has received so much pushback from modern evangelicals. In 1991, theologian Wayne Grudem wrote an article titled “He Did Not Descend into Hell: A Plea for Following Scripture Instead of the Apostles’ Creed.” His arguments have been echoed by many others.

Now clearly, if the Apostles’ Creed is at odds with Scripture on this point, we should go with the source that’s God-breathed (2 Tim. 3:16). At the same time, the Protestant view of sola Scriptura has never denied the role of creeds and confessions. Indeed, Protestant confessions like the Belgic Confession and the Thirty-nine Articles explicitly affirmed “the three creeds”: the Apostles’, the Nicene, and the Athanasian. The Heidelberg Catechism structures many of its questions and answers around the Apostles’ Creed. So despite not being inspired, it would seem that with a creed as ancient and basic and widely confessed as the Apostles’ Creed, you would need a pretty good reason to disagree.

Do we have such a reason in this case? Matthew Emerson thinks not. Emerson is a professor at Oklahoma Baptist University, executive director for The Center for Baptist Renewal, and blogger at Biblical Reasoning. And in his new book, ‘He Descended to the Dead’: An Evangelical Theology of Holy Saturday, Emerson argues that the doctrine of Christ’s descent, besides being the ancient faith of the church, rests on a firm biblical foundation and has great practical significance. As such it ought to be retrieved by those who don’t currently confess it, and better understood by some who do. 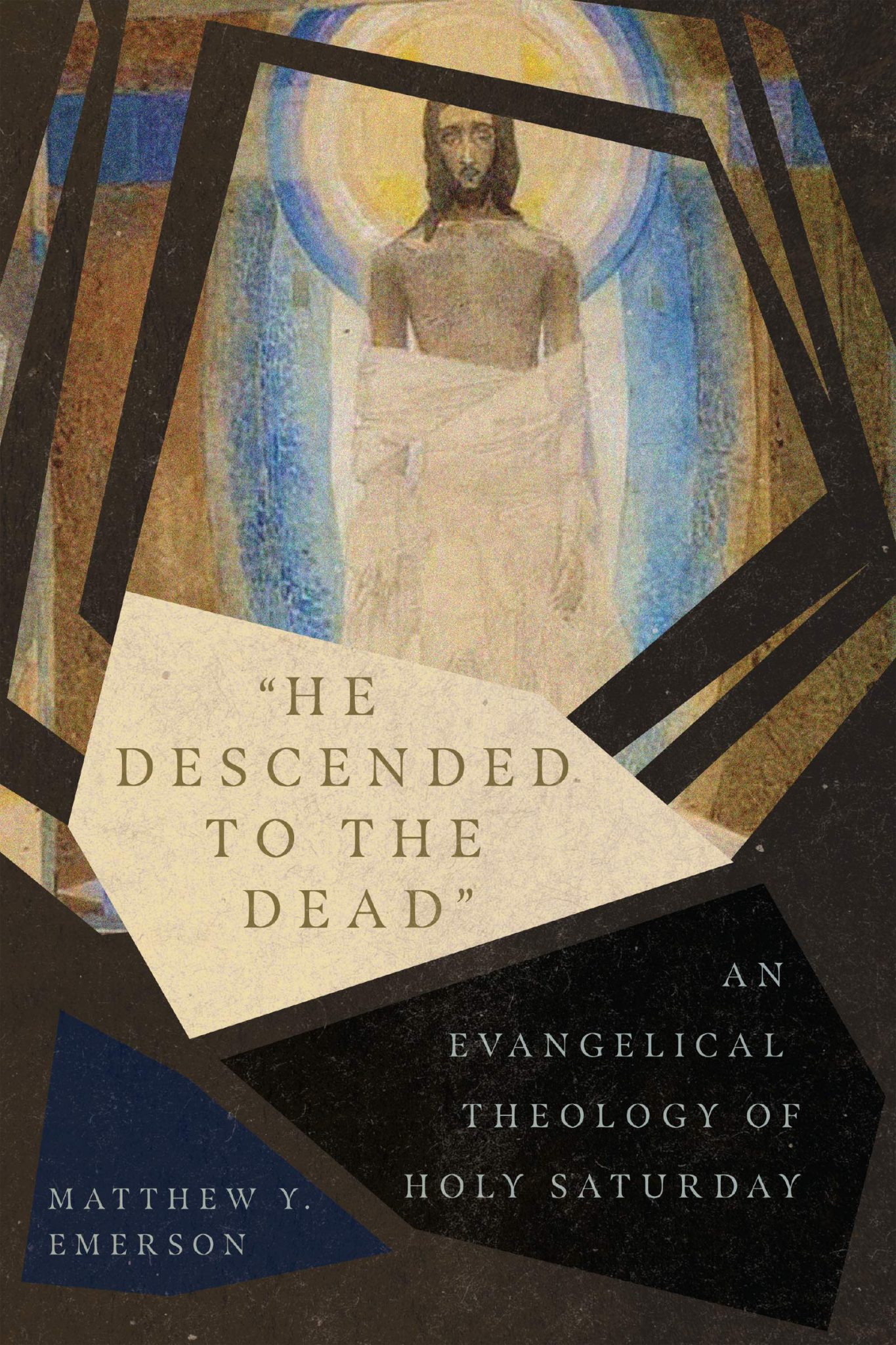 'He Descended to the Dead': An Evangelical Theology of Holy Saturday

'He Descended to the Dead': An Evangelical Theology of Holy Saturday

This is a book every evangelical and Reformed pastor should read, especially those whose churches recite the Apostles’ Creed. Not everyone will agree with Emerson’s answer. But it deserves to be considered, and it has the potential to bring greater unity and understanding to the body of Christ.

In this review, I want to draw out three points about Christ’s descent from Emerson’s book.

First, it doesn’t mean that Jesus suffered in hell’s flames. The book’s title alone would go a long way toward easing the concerns of many evangelicals, for whom the words “into hell” immediately conjure up images of Jesus being tormented. Emerson addresses this right out of the gate:

I don’t blame anyone for refusing to confess that Jesus went to hell and suffered. But since almost no one in the church held that understanding for the first 1,500 years, it seems a shame for evangelicals today to think they have to choose between violating their consciences and remaining silent. Thus one effect of Emerson’s book, I hope, will be for more churches to remove a needless stumbling block by changing the wording to something like “he descended to the dead” (as many churches already have). Anyone who can confess that Christ rose from the dead should be able to confess that he descended to the dead (cf. 42, 58).

Anyone who can confess that Christ rose from the dead should be able to confess that he descended to the dead.

Second, it doesn’t simply mean that Jesus suffered hell’s pains on the cross. This was the view of reformer John Calvin, though it is “virtually unattested” prior to him (99). Emerson agrees with Calvin’s view when considered as a theological statement—it is gloriously true that Jesus delivered us from hell by experiencing the hellish torments of God’s wrath on the cross. But as an explanation of the creed, it fails. Besides being “entirely novel” (100), it also interrupts the narrative structure of the creed, which places the descent after Christ’s crucifixion, death, and burial (107). Indeed, some contemporary Reformed theologians feel the weight of these objections and argue the phrase should simply be deleted.

So Reformed readers should know that Emerson’s view conflicts with that of Calvin and the Heidelberg Catechism. At the same time, it’s much closer to that of the Westminster Larger Catechism, Q. 50, and with Emerson’s nuances could be viewed simply as an expansion of it (205–6). His view is also similar to that of the Italian reformer Peter Martyr Vermigli. For confessional Reformed readers, I’d highly recommend Jeffrey Hamm’s article “Descendit: Delete or Declare?”

Finally, it doesn’t mean that some dead people got a second chance to be saved after they died, or that hell was emptied of all its inhabitants in some form of universal salvation. Ideas like these got added to the doctrine during the Middle Ages, and are still held by some Roman Catholics and Eastern Orthodox. But Emerson argues that they were not part of the ancient teaching and are certainly not biblical (91–97, 109).

What Christ’s Descent Does Mean

Jesus experienced death as all humans do—his body was buried and his soul departed to the place of the dead—and in so doing, by virtue of his divinity, he defeated death and the grave. (35–36)

After wading through so much disagreement, this definition might seem remarkably uncontroversial. Who would deny that Jesus’s soul “departed to the place of the dead”? Of course, the controversy lies in how you interpret “the place of the dead.” But even here, Emerson diffuses a lot of heat by his careful handling of the text.

One way he explains the place of the dead is by synthesizing three passages from Luke’s writing (Luke 16:19–31; 23:43; Acts 2:27, 31). Following Luke 23:43, Emerson notes that when Jesus died he joined the Old Testament saints in paradise. As for the “location” of Paradise, he argues the Second Temple Jewish idea, reflected in Luke 16:19–31, pictures paradise as the happy compartment of Sheol/Hades located in the heart of the earth (39–44, 135). This is why the dead were always spoken of as going down to Sheol, and why the Creed uses the verb descended rather than ascended. More importantly, it’s why Luke could also speak of Jesus being “in Hades” while dead (Acts 2:27, 31). And yet it wasn’t a place of torment for Jesus, any more than for Abraham and Lazarus.

Regardless of where Paradise was for Old Testament saints (whether heaven or Hades), it was different in this key way: it lacked the presence of the human Christ.

Nor need it be viewed as a place where they were cut off from God (Ps. 139:8; cf. Luke 23:46), as though Old Testament saints were somehow not fully saved. As a Reformed Christian, I had always struggled with the idea of Old Testament saints experiencing the afterlife differently than we do, as it seemed to suggest too much discontinuity. Emerson’s most helpful contribution has been to help me see that regardless of where paradise was for Old Testament saints (whether heaven or Hades), it was different in this key way: it lacked the presence of the human Christ. For anyone who holds to an orthodox view of the incarnation, this ought to be patently obvious. Yet I had overlooked its significance for this issue. As Emerson writes:

The presence of Jesus in paradise . . . changes its entire constitution. Rather than being a place where the righteous dead await the coming of Israel’s promised Messiah, the Christ is now in their midst. First, in the descent, he is present with them in his human soul, and then, after the ascension, he is present with them bodily. This change in paradise’s constitution . . . is mirrored in the New Testament by a change in spatial description. . . . The spatial description of paradise shifts from the underworld to the third heaven (2 Cor. 12:2–3), not because it has been physically moved (it is a spiritual, not physical, realm), but because its spiritual reality has changed. (135)

Much more could be said about the biblical case Emerson makes. In much of it, he is consciously drawing on the previous work of Justin Bass’s The Battle for the Keys. He argues from passages you might expect, such as Ephesians 4:9 and 1 Peter 3:18–22, along with others you might not expect, such as Matthew 12:40 and Romans 10:6–7.

Even if you’re not ultimately convinced by Emerson’s reading of the biblical texts, you’ll likely be surprised at how many other theological issues this doctrine touches. The chapters in Part Two deal with how Christ’s descent relates to doctrines like:

The book’s academic nature comes out in these chapters. But ‘He Descended to the Dead‘ begins and ends with a pastoral heart (6–9, 208). Because Christ’s descent pushes us to recognize that he doesn’t simply know what it’s like to die. He knows what it’s like to be dead, to live in that happy but unnatural state of unclothed-ness (2 Cor. 5:4), and to dwell among the departed spirits. The resurrection that forms the foundation of our hope didn’t happen in an instant—it happened after “three days and nights in the heart of the earth” (Matt. 12:40, language reminiscent of Jonah’s descent to “the belly of Sheol”; cf. Jon. 1:17; 2:1, 6. Also compare Matt. 12:40; 16:31; 27:63; Esther 4:16; 5:1).

Our high priest understands better than we think. And when we or our loved ones stand on the brink of death, we can draw comfort from knowing that our Savior has already been there. He’s already walked through the gates of Hades, and come back out with the keys (Rev. 1:18). This is good news. So next time your church is reciting the Apostles’ Creed, don’t be silent. Hold your head high and confess the faith with joy. Because the one who experienced death for you is now ascended on high, and is even now preparing for his final descent (1 Thess. 4:16).