Three politically left-of-center evangelicals have written Compassion (&) Conviction: The AND Campaign’s Guide to Faithful Civic Engagement as a primer on Christian political engagement. Justin Giboney is an Atlanta political consultant. Michael Wear is a former Obama staffer. Chris Butler is a Chicago pastor and community activist.

The book is instructive for all Christians, but perhaps most useful for evangelicals and other Protestants who are Democrats striving to be faithful as progressivism becomes more adversarial to traditional faith.

Some conservative Christians might be tempted to dismiss this book as a roadmap for being religious and liberal. They would be unfair to do so. The counsel has wider application. And while political conservatives will disagree with the authors’ political alignment, they should appreciate the wider importance of Christian engagement in both major political parties. 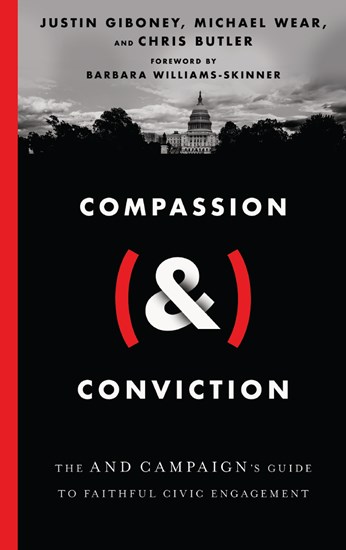 Compassion (&) Conviction: The AND Campaign's Guide to Faithful Civic Engagement

Compassion (&) Conviction: The AND Campaign's Guide to Faithful Civic Engagement

Have you ever felt too progressive for conservatives, but too conservative for progressives? Too often, political questions are framed in impossible ways for the faithful Christian: we’re forced to choose between social justice and biblical values, between supporting women and opposing abortion. As a result, it’s easy for Christians to grow disillusioned with civic engagement or fall back into tribal extremes. This state of affairs has damaged Christian public witness and divided the church.

Compassion and Conviction makes key arguments about Christian statecraft that should be obvious but, sadly, require stating in our own time. Government is ordained by God, and he presides over order. There’s no specific biblical instruction on preferred systems of government. Politics for Christians should focus on love and truth. All persons merit treatment with dignity as God’s image-bearers. Absent consistent laws, society can’t incentivize people to act justly. Christian politics seeks to help others and witness to the gospel. Faithfulness is more important than politically winning. Religious freedom is vital because our God isn’t coercive. Christians can’t just quote Bible verses if they’re to be politically effective; they must be civically literate also.

These authors make other less obvious, though also important, points. For example:

The authors note, as many Christians on both left and right often forget, that the law is a teacher. What it countenances will be perceived, rightly or wrongly, as establishing morality. They warn, in an obvious point, that in our currently polarized America, political affiliations have become dangerously religious in nature.

The authors recall Francis Schaeffer—the 20th-century conservative Presbyterian cultural critic whose writings were seminal to 1970s conservative evangelical politics—who urged Christians toward co-belligerency with non-Christians on political matters of common concern. Such collaboration is possible thanks to common grace available to all. Like Schaeffer, the authors stipulate that Christians, even in diverse political alliances, should recall they “share an ultimate objective and alliance [only] with other believers.” They also lament that some “Christians are more willing to defend their ideological tribe than the Christian faith.”

The authors also commendably lament cancel culture. And while they rightly describe the importance of civility to Christian political witness, they warn that civility has been exploited to silence or marginalize controversial perspectives. They lament how some in politics, especially within the Democratic Party, have been cancelled or threatened because they share traditional Christian beliefs about marriage and sexuality.

While [the authors] rightly describe the importance of civility to Christian political witness, they warn that civility has been exploited to silence or marginalize controversial perspectives.

In a chapter devoted to Christian protest and advocacy, the authors commend the examples of Shadrach, Meshach, and Abednego in defying King Nebuchadnezzar, Jesus cleansing the temple, Jesus protecting the adulterous woman from a mob, Moses and Aaron before Pharaoh, and Esther imploring King Xerxes to defend the Hebrews. These examples are all pertinent, though they say Jesus when chasing the money changers with a whip cord “did not hurt anyone or violate any laws,” which seems debatable. They also describe God as having “worked with Moses and Aaron, sending various plagues that significantly disrupt the comfort of Egyptian life.” God’s killing all of Egypt’s firstborn was more than disruptive. And his interventions evince that human protest and advocacy, however lofty and savvy, can only prevail, ultimately, by divine power.

As the authors say in their conclusion, Christian political engagement is offering labor “to the Lord so he can accomplish his will.” But maybe they should more strongly stress divine sovereignty. He doesn’t need our political engagement to achieve his purposes, though he invites many of us into this work. This vocation can be both honor and blessing.

The authors also conclude by calling their readers to politics by voting, organizing, running for office, and protesting. As activists themselves, they don’t seem fully to acknowledge that maybe not everyone has fervent political callings, or at least not to the same extent. Aren’t some people, perhaps most people, summoned primarily to lives of minimal political engagement? And doesn’t Christianity intrinsically warn against the over-politicization of society?

As evangelicals, the authors continuously root their political understandings in Scripture. They cite church tradition, though they don’t elaborate on it much. Maybe one of modern evangelicalism’s greatest weaknesses, especially in political witness, is undervaluing the development of historic Christian teaching. Too often certain Bible verses are expected to do work for which they weren’t necessarily intended.

For example, the authors seem to equate Christian activism on abortion and immigration. But the universal church’s teaching against abortion is long and deep. There’s no equivalent church teaching on what level of immigration particular modern nation states are expected to accommodate. Roman Catholicism speaks of a hierarchy of teachings, and some church stances depend more on prudence than dogma. Of course, modern evangelicalism lacks a magisterium with a catechism. But Protestantism does have venerable political witness traditions that merit exploration and contemporary application. Lutheranism, Calvinism, Anglicanism, Wesleyanism, among others, offer unique historical insights and principles on statecraft. Generic U.S. evangelicalism by itself is insufficient for a deep political theology.

The collapsed memory of the great Protestant traditions, which helped mediate America’s past political divisions, may play some role in today’s polarization. These authors aim to surmount binary choices in American politics based on contemporary ideological tribal categories. Recovering historic Protestant political theology (Amy Black’s Five Views on the Church and Politics is one resource) could be helpful for this process. It may even be more helpful than a call to amplified Christian political activism.

But Compassion (&) Conviction doesn’t claim to be the definitive manifesto for Christian political witness. It instead offers itself as an introductory study guide to thoughtful, faith-based social engagement. For this purpose, it’s sensible and measured.