When we consider the contribution to Christianity of the late Francis Schaeffer, we often think of his L’Abri community in the Swiss Alps and of his noteworthy books, such as The God Who Is There, Escape from Reason, and How Should We Then Live? Yet it’s one of his lesser known works, The Church at the End of the 20th Century, which is perhaps the most relevant for the American church at the end of 2020.

Published exactly 50 years ago, the particulars of this short volume can be quite dated—reflected in the unsightly cover of my copy from 1970—yet its themes are surprisingly contemporary. Schaeffer speaks to the loss of truth and personal responsibility, the collapse of authority, and the growing threat of violence. He warns of impending ecological disaster and scientific manipulation, even the possibility of nations developing and weaponizing a deadly virus.

This is perhaps the book’s greatest weakness: that it shades toward alarmism. Yet Schaeffer’s analysis doesn’t remain there. He provides the church then and now with a positive response that is holistic and hopeful. 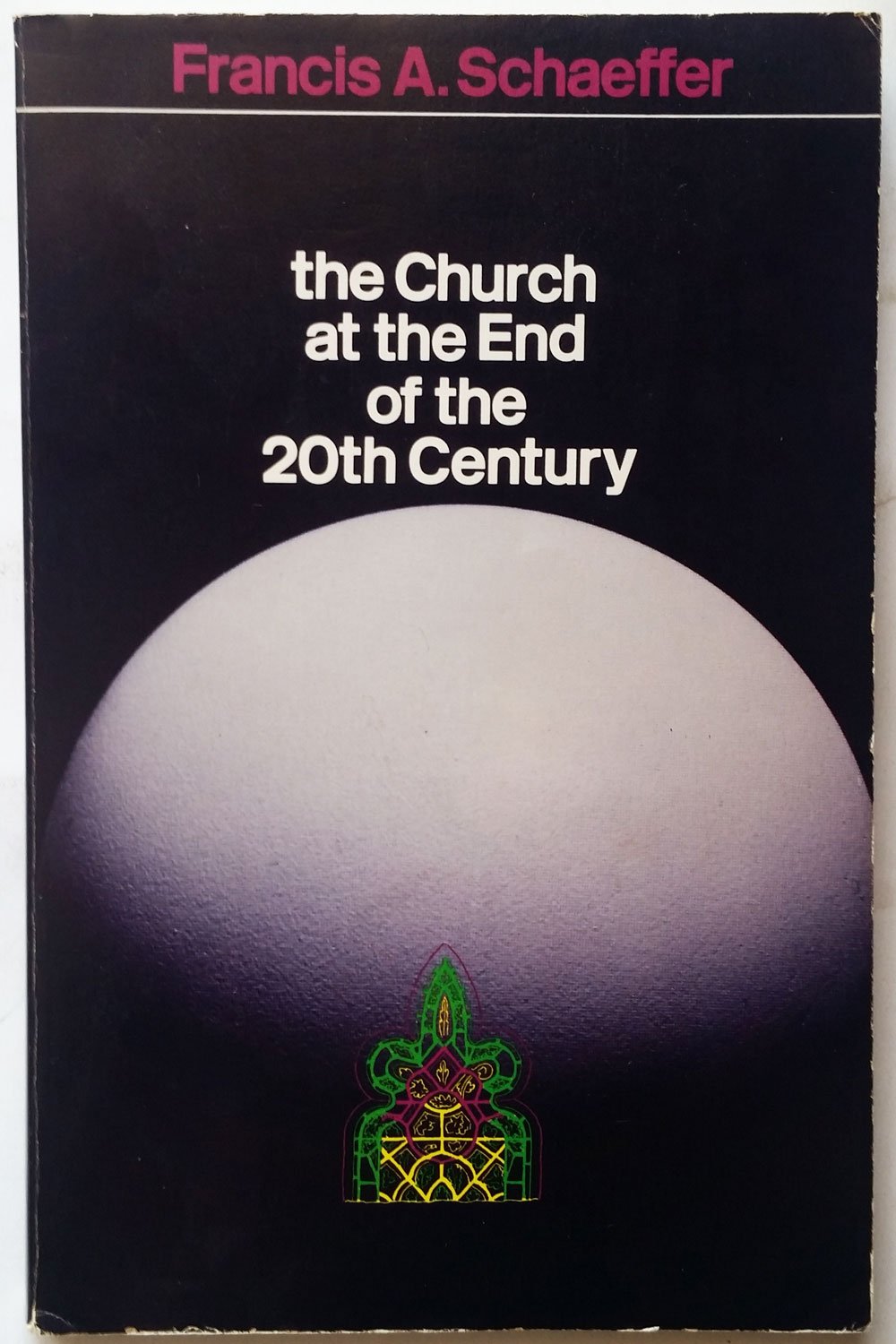 The Church at the End of the 20th Century

The Church at the End of the 20th Century

“Does the church have a future in our generation? I believe the church is in real danger. . . . We are facing present pressures and a present and future manipulation which will be so overwhelming in the days to come that they will make the battles of the last forty years look like child’s play.”

Today the pressures and battles Schaeffer predicted have engulfed the evangelical church. They come from the moral decay of the surrounding world. They come from the conflict between Christian principles and political ideologies. They come from the growing compromise morally and theologically within the church and among evangelicals in particular. Schaeffer’s insights, republished here, have crucial significance in helping Christians to understand and confront these battles.

Schaeffer writes in response to the student revolution in his day. At the time, the youth culture in America and Europe was disillusioned by their parents and the political elites they saw as authoritarian and out of touch. They were interested in unfettered freedom. There was also fatigue with unending wars. And at home, especially in the United States, students were unsettled by the twin issues of poverty and racial injustice. This led many to engage in a political movement known as the New Left.

As Schaeffer opens the book, he describes his society as marked by increasing polarization, disillusionment, and a loss of hope, the combination of which was careening toward chaos. Politically, Schaeffer laments an environment where classic liberalism has committed suicide—ruined by the pursuit of autonomous freedom divorced from the Judeo-Christian values that birthed such freedoms. He also cautions about the futility of conservatism—which is, by definition, a fight for the status quo—when we inhabit a post-Christian society where the prevailing values of the majority aren’t worth conserving.

Yes, back in 1970, Schaeffer says the United States—not just continental Europe—was already post-Christian. He writes about the reality of historic Christianity becoming the minority in the West, stripped of cultural power and influence. And in this situation, Schaeffer identifies a great danger for evangelicals: taking sides with political elites in order to retain comfort, affluence, and personal peace. In the face of societal chaos and upheaval, Schaeffer doesn’t want Christians to compromise for the sake of short-lived comfort.

In this remarkably prescient work, Schaeffer goes on to predict the inevitable loss of freedoms that will come once the Christian foundations of Western society have finally crumbled. And in response, Schaeffer calls for a kind of culture war—though not the sort of battles we might be imagining. Schaeffer wants a Christian revolution, the kind that looks like spiritual reformation.

Schaeffer calls for a kind of culture war—though not the sort of battles we might be imagining. Schaeffer wants a Christian revolution, the kind that looks like spiritual reformation.

Given the social and cultural realities of his day—which bear striking resemblance to our own—Schaeffer outlines three aspects of a true revolution for the church.

1. “Christians must realize there is a difference between being a cobelligerent and an ally.”

Christians can affirm certain ideals, and work alongside others to see them realized, without aligning with any one political camp. As Schaeffer writes, “If there is social injustice, say there is social injustice. If we need order, say we need order.” In our day, this point still applies. The church must retain the ability to articulate kingdom values (that, for example, Black Lives Matter) and still confront the values, judgments, and actions of any earthly kingdom (such as troubling aspects of the BLM agenda and organization).

But the challenge is that, as in Schaeffer’s day, pastors and Christians are told they must choose one side or the other. At this very juncture Schaeffer believes the church should resolutely remain on the outside—not on any particular side of the political aisle—to speak on behalf of Christ and Scripture, truth and love. That is, the church should work for what is right while rejecting both political polarization and also cultural capitulation.

Perhaps most interesting, Schaeffer makes this appeal, in part, for the sake of the next generation who are prone to outgrow the confining political affiliations of their parents. If that was true 50 years ago, surely it is so among evangelicals today.

2. “We and our churches must take truth seriously.”

The second component of this revolution involves the need for bold truth-telling that counters theological liberalism in the academy and that engages the world through witness. The contemporary church must take truth seriously enough to be, like the early church, scorned by the religious and secular alike. In other words, the church needs the backbone of the apostles, willing to face shame and rejection for the sake of the unchanging gospel. But Schaeffer also warns about hypocrisy. A culture attracted to authenticity will see through the veneer of a church that practices untruths. “This is a time,” he writes, “to show to a generation who thinks that the concept of truth is unthinkable that we do take truth seriously” in both our doctrine and also our life.

Schaeffer goes on to encourage the church to engage unbelievers in deeper conversations. Referencing Canadian philosopher Marshall McLuhan (including his prediction of “the electronic village” where, through a huge computer, we’ll all know what everyone thinks!), Schaeffer says that our Christian witness must fight against shallow communication and “insist that it deals with content.”

In other words, our evangelism and apologetics need to go beyond tweetable arguments or inspirational Instagrams. In this era of endless riffs and rants, the Christian response must be deeply relational and demonstrably reasonable. In 2020, Schaeffer’s warning about hypocrisy also applies to a Christian’s willingness to spread political conspiracies and scientific speculation. Those who wish to persuade others must earn their trust through intellectual integrity.

3. “Churches must be real communities.”

We need to not only preach truth and stand against untruth, Schaeffer says; we also need to show it’s possible “to have something beautiful and unusual in this world.” Specifically, he challenges the church: “If others cannot see something beautiful in our human relationships, if they do not see that, upon the basis of what Christ has done, our Christian communities can stop bickering, their fighting and their infighting, then we are not living properly.” The church is meant to be an alternative community, a real family, bound by love. And Schaeffer goes on to press for radical hospitality—specifically toward other ethnic and socio-economic groups—as the practical means by which such love is demonstrated and such community fostered.

If we’re to wage war, it needs to be on our divisiveness.

Schaeffer closes the book with an appendix on “The Mark of a Christian” (also published separately), in which he appeals for this kind of love in practice. “Our love must have a form that the world may observe; it must be seeable.” But sadly, what the world sees in much of the church today isn’t love toward our political rivals or ideological opponents. And that fighting has spilled into our churches. Like no other year in my memory, congregations are torn asunder by ethnic tensions, a contested election, and our pandemic response, even something as simple as a mask mandate. If we’re to wage war, it needs to be on our divisiveness.

The church at the end of 2020 desperately needs to recover her loving unity and present the watching world with the hope of a beautiful community.