Jeramie Rinne has given us an important tool in this to-the-point book on eldership. Church Elders: How to Shepherd God’s People Like Jesus delivers on the promise of its title in 122 focused and conversational pages. This is one of a series of books in a 9Marks imprint with Crossway aimed at unpacking the various marks of a healthy church. It’s a book for those serving as elders/pastors and for the congregations they lead.

Like many pastors, I’m familiar with several excellent books on this topic, but I’ve recognized a need for a shorter book to hand around to busy church members, prospective elders, and current elders. Rinne’s book meets an important need. Nevertheless, when I picked it up I did wonder if the biblical data and central texts could be presented in a fresh way that held my attention, made me think, and left me convicted.

Just as I’d hoped, Rinne’s book did all that. Church Elders was clarifying, challenging, humbling, and encouraging. A book on such a consequential and often confused topic really needs to be all four. I’ll highlight the book’s strengths under these headers.

This book makes plain Scripture’s teaching on eldership. For example, the eight chapter titles actually summarize the biblical job description for an elder: “Don’t Assume,” “Smell Like Sheep,” “Serve Up the Word,” “Track Down the Strays,” “Lead Without Lording,” “Shepherd Together,” “Model Maturity,” and “Plead for the Flock” (9). If you’ve read or taught on this subject, you can probably hear verses in your mind as you read those titles. It’s an instructive way to frame up such a short book. The headers that give shape to each chapter teach as well. For example, in the chapter “Track Down the Strays,” there’s a section titled “Five Species of Straying Sheep.” Already curious, aren’t you? Subheaders lead us through descriptions of “Sinning Sheep,” “Wandering Sheep,” “Limping Sheep,” “Fighting Sheep,” and “Biting Sheep” (62–68). That’s a great section for a discussion over coffee with a prospective elder or for a team of pastors burdened for the flock.

As always, biblical clarity serves biblical conviction. Elder boards often function as mere boards. But shepherding is the language and imagery of the Bible on eldership, and so we should look and act and smell like shepherds. Here’s how Rinne, senior pastor of South Shore Baptist Church in Hingham, Massachusetts, puts this imagery to work in reshaping how we think about missing members:

People in my congregation [speak of some as] “falling through the cracks.” . . . But is that how it happens? . . . Do members really leave churches abruptly, accidentally, and without any opportunity for people to notice? What if, instead of “falling through the cracks,” we use a different image: “straying from the flock.” . . . The image of straying sheep implies that a disconnected church member bears a personal responsibility to stay involved with the congregation . . . [it] also suggests that someone should keep watch over the flock and take action when a sheep begins to meander away. (57–58)

Faithful shepherding begins with a clear biblical vision of what shepherds are and what God has asked them to do.

There are at least two more things a book like this needs to do: it needs to humble and encourage. Eldering is a job of incalculable privilege and weight. That’s humbling. And it’s a job that God stands behind and that Christ is committed to see through in us. That’s encouraging. Church Elders is both. 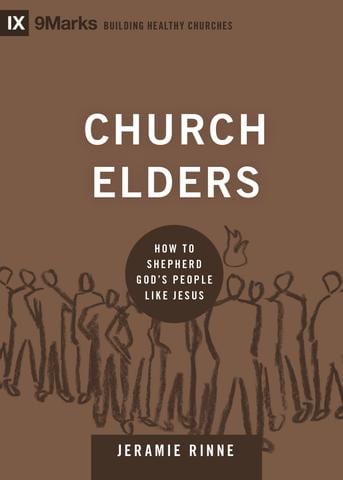 Church Elders: How to Shepherd God’s People Like Jesus

Church Elders: How to Shepherd God’s People Like Jesus

Feel like you should pray more? You should. And that can be discouraging. But here’s how Rinne instructs us in his chapter, “Plead for the Flock”:

If the demanding scope and humanly speaking impossible success criteria of an elder’s job description are not enough to send him pleading to heaven for help, one glance in the mirror should do it. . . . Try not to think of prayer as an extra activity tossed onto your already overloaded schedule. Rather, think of it as the operating system on which all of the elder apps run. As Paul said, “Pray continually.” (113)

This kind of humbling encouragement shows up in the conclusion as well. There Rinne exhorts us to “shepherd well,” with two reasons: “because there is an account to be given . . . [and] a crown to be gained” (121–122). This is a serious matter. And it is a glorious matter. Amen.

This little book is almost all strength. But it could have been just a bit stronger. I’ll offer two suggestions for how. First, Rinne makes a clear biblical case for understanding “elder,” “overseer,” and “pastor” to refer to the same office or role (16, 32, 34, 123). But in the course of the book Rinne often uses the language of “elder” to refer to lay elders or an elder board, and “pastor” to refer to vocational elders (13–14, 26, 29, 31, 34, 48). This certainly reflects the way these words are used in most contexts (16). But this kind of distinction teaches that a pastor is one thing and an elder is another. The book could have been improved by modeling, not just explaining, the New Testament’s interchangeable use of these terms.

The second issue is probably inevitable in a book this short, but it would have been nice to have a few paragraphs on the different ways eldership is conceived. For example, Rinne seems to assume the senior pastor is a first among equals, but he doesn’t ground this assumption in Scripture or explain how this role relates to the rest of the pastors/elders (17, 38, 71). Or, as another example, he refers several times to the nomination of elders, but could have explained his thinking on where such nominations come from in Scripture (21; cf. Titus 1:5, 1 Tim. 5:22). Obviously, a book this focused can’t cover every dimension of eldership, and it doesn’t try. But perhaps one way to achieve this would be to footnote resources from the content treasury of the 9Marks website and journal.

Bottom line: I expected this to be a helpful book because of the reputation that comes with just about everything 9Marks publishes. I wasn’t disappointed.

Trent Hunter serves as pastor for preaching and teaching at Heritage Bible Church in Greer, South Carolina. He is the author of Joshua (Crossway, 2016) and Graphical Greek: A Quick Reference Guide for Biblical Greek. He is also an instructor for the Simeon Trust workshops on biblical exposition. He is married to Kristi, and they have three children, Carson, Madalyn, and Shae. You can follow him at trenthunter.net and on Twitter.