We’re living in a golden age of political theory. Because the culture war shows no signs of abating, because we have no shared public philosophy, American intellectuals have been working overtime to explain the political breakdown and prescribe solutions. Some, like Jonah Goldberg in Suicide of the West, argue for a reaffirmation of classical liberal values. Others, like Patrick Deneen in Why Liberalism Failed, argue that the project of liberal modernity is not the solution, but the problem. Senator Ben Sasse’s books (The Vanishing American Adult and Them), Rod Dreher’s Benedict Option, Yoram Hazony’s Virtue of Nationalism, Mark Lilla’s The Once and Future Liberal, and George Will’s Conservative Sensibility have all contributed to a vibrant and wide-ranging debate.

Yuval Levin—a conservative intellectual, resident scholar at the American Enterprise Institute, and editor of National Affairs—has now given us his second contribution to this burgeoning literature. In 2016’s The Fractured Republic, Levin argued that Boomer nostalgia distorts our politics. If only we could get back to some golden age (the 1950s and 1980s for conservatives, the 1930s and 1960s for liberals), this nostalgia tells us, we could put things to rights. Levin persuasively argued there was no going back, and that all purported golden ages were nothing of the sort anyway. 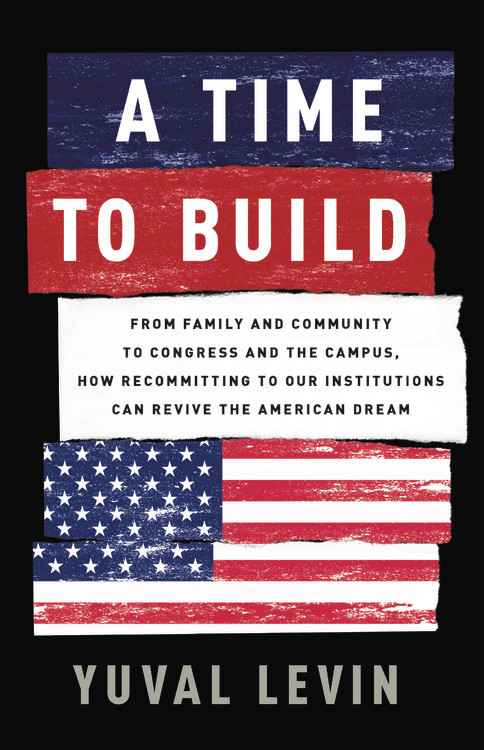 A Time to Build: From Family and Community to Congress and the Campus, How Recommitting to Our Institutions Can Revive the American Dream

A Time to Build: From Family and Community to Congress and the Campus, How Recommitting to Our Institutions Can Revive the American Dream

In his new book, A Time to Build: From Family and Community to Congress and the Campus, How Recommitting to Our Institutions Can Revive the American Dream, Levin argues that our institutions have degenerated because we have fallen into the habit of treating them as platforms for performance rather than molds for character formation. He catalogs the way politicians, journalists, university students, and church leaders use their vocations as little more than media for self-expression.

It’s no wonder we do not trust our institutions. So many of them no longer function to do the purpose for which they were established—they now exist to display prominent personalities. The boundary lines between institutions break down, and our all-consuming culture war rages unchecked across entertainment, news, education, politics, and family life.

Levin argues that institutions have a moral purpose. They’re “the durable forms of our common life. They are the frameworks and structures of what we do together” (19). Institutions teach us how to inhabit our roles and how to be social. Institutions have a formative function: they shape, habituate, and socialize people to act a certain way, to achieve the shared purpose of the institution. The family turns men into husbands and fathers; the professions turn students into doctors and lawyers; the U.S. Constitution teaches us how to be citizens.

Levin’s understanding of institutions may sound foreign to many American Protestants, especially evangelicals—even as it may sound obvious to Roman Catholics, other high-church traditions, and non-Western Christians. The American evangelical tradition has absorbed much of the individualism of the culture that helped shape it. Institutions are ways of channeling and focusing the power of the whole against the individual, compelling the individual to accommodate himself or herself to the needs of the group. As individualists, Americans tend to push against, even resent, the constraining force of institutions. And now Americans have developed a habit of treating institutions, not as constraining forces to shape our individuality, but platforms for performing it.

But Christians have language with which to understand the point Levin is making. When Levin (a Jewish Israeli émigré to the United States) talks about the socializing and habituating function of institutions, Christians might hear an echo of how the Bible speaks of sanctification, our continual maturation and growth in holiness. When Levin talks about institutions, Christians might think of the church. That is why Catholics and others with a stronger tradition of formation may find Levin’s argument more intuitive.

Though he doesn’t put it in these words, Levin’s argument is, essentially, that the way Christians think of the church is how citizens should think of institutions generally. In the church we’re one body with many members, and each member should understand its place and function within the body (1 Cor. 12:12–27). So too within all our institutions we should understand and cheerfully inhabit the role given us.

Thinking institutionally requires humility and self-abnegation: we have to put the needs and mission of the institution ahead of ourselves. It requires courage to stand up to institutional insiderism (the abuse of power against outsiders). It requires caring about problems when our cynical, jaded age tells us apathy is the better part of wisdom. Hardest of all, it requires we trust in, and submit to, the institutions we create. Many Americans don’t do submission, and we don’t give our trust unless it is earned.

There’s a chicken-and-egg problem here. Levin wants us to muster the virtue necessary to reinvigorate our institutions, yet these very institutions are necessary to form our virtue. He acknowledges institutional breakdown and moral decay is a vicious cycle. How do we break the cycle? Levin asks us to recommit to thinking and acting institutionally and to cultivate the virtues of “loyalty, solidarity, and fidelity” (176). He counsels elites to adopt a “code of conduct” to rein themselves in, to act with greater accountability and responsibility, and to emulate the noblesse oblige of the old aristocracy.

Levin’s prescriptions are true, if a little underspecified. But—and this is probably a function of my own jadedness—it’s hard to see how they might work. Levin has already cataloged how much our institutions have broken down and how little we trust them. Why, then, would I want to reinvest in them? Levin’s answer—they perform a vital role in moral formation—is too generic to inspire commitment to a specific institution. Given the problems of this particular institution here and now—a school, say, or an employer—why waste effort on it?

Levin is proof that vibrant and insightful work comes from outside the evangelical subculture.

There is a time-management problem here. I want to put my finite time and energy toward endeavors that have a reasonable chance of success. Many Christians feel sympathy with Rod Dreher’s argument in The Benedict Option—secular society is a lost cause, and we should hunker down to weather the storm—which, if true, would counsel that we abandon, not reinvest in, the shared institutions of our broader society.

Levin’s argument amounts to a plea that we not take the Benedict Option but (he doesn’t use these words) trust in God’s common grace. God causes his rain to fall on the righteous and the unrighteous alike. Levin himself is proof that vibrant and insightful work comes from outside the evangelical subculture. Do we have enough confidence, enough faith, to reach out to him and those like him for the common good?

Paul D. Miller is a professor in the practice of international affairs at Georgetown University and a research fellow with the Ethics and Religious Liberty Commission.