Since childhood I’ve been influenced by the way black preachers have spoken to the real and tangible needs within the African American community. I was raised in a black Baptist church in central Florida. As a kid, I sat in the pews, feet dangling, Sunday after Sunday, watching preachers of God’s Word exegete the text in a way that was accessible—bringing it to life for the congregation to grasp and apply to their lives and unique circumstances.

One of the things that stood out to me the most within the African American preaching tradition is the style and delivery of the message. We’ve had a long history of preachers who weren’t only good students of theology and homiletics, but also masterful rhetoricians—men who used powerful aphorisms to drive God’s truth home to the heart. African American preachers didn’t just implement the proper science of preaching, but they balanced this with the art of preaching—as Eric Redmond notes regarding sermons within this tradition:

Some of them are picturesque, vivid, and almost musical. They sing and sting. They are anthropological and theological. In them are insights for preachers and Bible readers who want to be the most effective today. 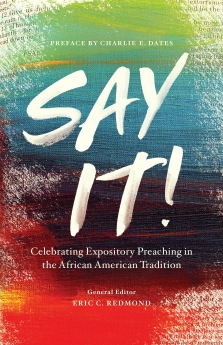 Say It!: Celebrating Expository Preaching in the African American Tradition

Say It!: Celebrating Expository Preaching in the African American Tradition

Say It! A Celebration of Expository Preaching in the African American Tradition argues that biblical exposition is most dynamic when coupled with the African American preaching tradition. Charlie Dates, Romell Williams, George Parks Jr., Terry D. Streeter and a cast of pastors and preaching professors collaborate to demonstrate the power of exposition in the cradle of the black pulpit.

This is why Redmond’s new edited volume, Say it!: Celebrating Expository Preaching in the African American Tradition, is long overdue. Finally, a book that pushes back on the type of subtle (at times not so subtle) derision and assumptions the African American preaching tradition has endured for years. In this review I want to mainly engage with what Redmond addresses in his preface and introduction.

Redmond, associate professor of Bible at Moody Bible Institute in Chicago, explains a common occurrence within the black church. As a church sees that God has called a gifted young black man to the work of pastoral ministry, they send him away to Bible college or seminary to equip him by getting rigorous theological training. But a shift ends up happening.

“All starts well as the young herald advances in theological and biblical studies,” Redmond writes. “However, over the course of the first and maybe even second theological degree, a notable change takes place in the preaching of the future pastor or evangelist.” The preacher returns from school denuded of everything he had embraced regarding the art of preaching within his African American preaching tradition. His references to historical and contemporary black preachers and figures have been traded in for references to Puritans and patristics; he trades in sermonic celebrations (e.g., “touch your neighbor,” “look at your neighbor and say,” and so on) for preaching that often comes off more like a classroom lecture or a popular evangelical conference speaker. Again, Redmond explains, “Over the course of the formal training in Bible and theology the young herald has been developing a growing disdain for what he believes is ‘the simplistic, unsophisticated’ preaching of the black church.” Essentially, as the young preacher has navigated these theological spaces, he’s seen so many jabs taken at the black church that he eventually shares the disdain.

In my experience, this disdain can grow into full-blown resentment and can lead to what Redmond calls a type of “gospel gentrification,” in which “young black scholars move into white evangelical institutions and are enamored by their supposed theological sophistication and the increased value of their tradition and, as a result, reject their own.”

Our growth in knowledge and training shouldn’t come at the expense of denigrating another’s tradition simply because their culture and style are different.

To be clear, Redmond is not denying there is much to learn from such institutions or one another’s traditions (there is!). Neither is he saying that black preaching is monolithic, much less always healthy. But our growth in knowledge and training shouldn’t come at the expense of denigrating another’s tradition simply because their culture and style are different.

If any theological institution tries to discredit and denigrate black preaching traditions by reducing it to tropes and rudimentary emotionalism, they need to check their heart and ask themselves if preaching has become about cultural preference and one stylistic tradition versus another. Accurately communicating the full counsel of God within the personality and creativity of the preacher can be shaped by culture and tradition.

Can something be critiqued within all preaching traditions? Of course! None is exempt. But regarding the African American preaching tradition, I believe false conflations are often made. For some, as soon as they hear certain characteristics of black preaching (call and response, whooping and hollering, celebration, crowd participation, rhythmic speaking, and so on) or certain theological emphases (justice and hope), they attribute it to the absence of the proper science of preaching (expositional) and to the presence of weak theology at best. This has essentially allowed folks to overlook decades of faithful black preaching.

One style or tradition is not greater than another as long as it’s communicating the full counsel of God’s Word to his people, accurately explaining and applying it to everyday life.

Expository preaching, then, has no “particular mode of verbal delivery” according to Redmond, and it’s not the product of one culture or tradition.

In this volume, a host of African American preachers and professors—Charlie Dates, Gregory Parks Jr., Terry Streeter, and others—collaborate in order to show us the power of expositional preaching within the African American tradition. Each takes a chapter and exegetes a text, crafting a sermon from a wide biblical landscape, including both Old and New Testament passages, while demonstrating the difference in how they preach from narrative, prophetic, poetic, apocalyptic, and epistolary genres.

No one culture has a monopoly on sound expositional preaching.

In each chapter, you’ll see how the art of preaching—creativity, delivery, style, rhetoric, and imagination—works in tandem with the science of proper expositional preaching to deliver God’s Word to God’s people.

No one culture has a monopoly on sound expositional preaching. Just as the Holy Spirit used the authors of the biblical canon to communicate God’s Word through different writing styles, personalities, and traditions, so God uses his preachers to herald his Word through different preaching styles, personalities, and traditions. One style or tradition isn’t greater than another as long as it’s communicating the full counsel of God’s Word to his people, accurately explaining and applying it to everyday life.

The African American preaching tradition should be embraced, studied, and celebrated. It was birthed amid suffering and pain—and we know suffering can give us all a unique perspective (Ps. 119:71). Let’s not reduce a powerful and historical tradition to dismissive tropes. Let’s instead see God, in his sovereignty, enabling a people to craft such a tradition by trial and fire, thereby providing a deep source of encouragement for the church today.

Our view of the African American preaching tradition needs to be reconsidered, and this book helps us do just that.

Ameen Hudson is a writer and speaker who focuses on the intersection of theology, art, and culture. He’s also the co-host of the Southside Rabbi podcast. He and his wife are members of Living Faith Bible Fellowship in Tampa, Florida.