I have a confession to make: I’ve been living in fear.

I’ve been a Christian for the past 13 years, and in that time I’ve seen people walk away from the Lord. These were people I looked up to and admired in the faith. I think often about how godly they were, how gifted they were, and how none of that mattered because in the end they all met the same fate. These experiences have left me with a deep-rooted fear that one day I will fall away from the faith.

In his new book, Assured: Discover Grace, Let Go of Guilt, and Rest in Your Salvation, Greg Gilbert helps Christians who are doubting their own sense of assurance move to a place of assurance and peace, empowerment and confidence. Gilbert—pastor of Third Avenue Baptist Church in Louisville, Kentucky, and author of several books—shows how God’s radical love in the gospel, and his promises to keep and preserve his children’s faith, are the fountainhead where we drink deeply of his assurance.

Gilbert lays out what he calls the “architecture” of Christian assurance—how Scripture seeks to assure Christians of their salvation in Jesus. He identifies four main sources of assurance: the gospel of Christ, the promises of God, the witness of the Spirit, and the fruits of obedience.

Each source doesn’t function in our lives the same way, however, and we aren’t meant to engage them in the same way. If we lack assurance it’s so often because we’re looking in the wrong place and seeking to draw it from the wrong source. 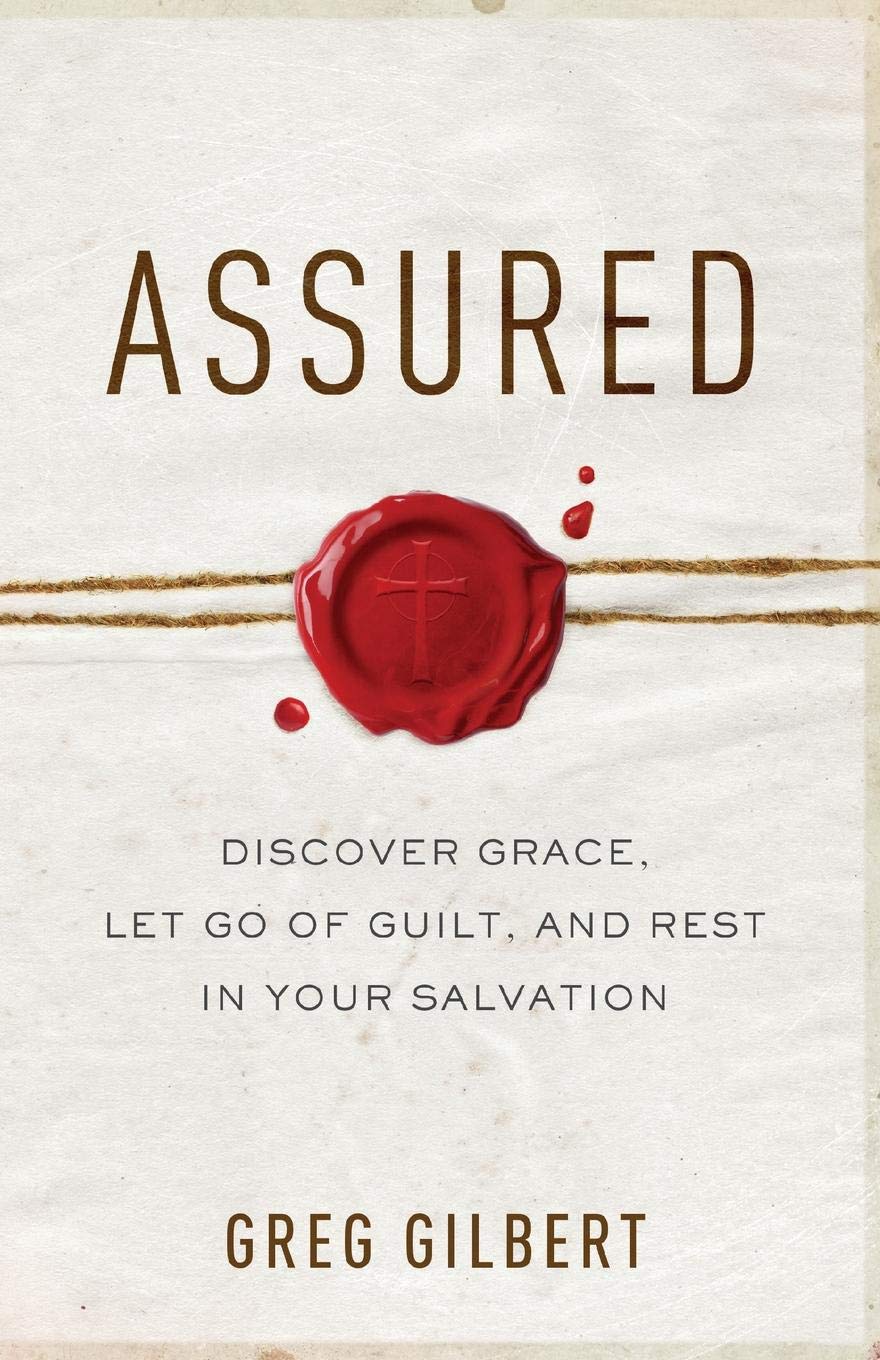 Assured: Discover Grace, Let Go of Guilt, and Rest in Your Salvation

Assured: Discover Grace, Let Go of Guilt, and Rest in Your Salvation

Despite our professions of belief, our baptisms, and our membership in the church, many of us secretly wonder, Am I truly saved?

We worry that our love for Jesus isn’t fervent enough (or isn’t as fervent as someone else’s). We worry that our faith isn’t strong enough. We struggle through the continuing presence of sin in our lives.

All this steals the joy of our salvation and can lead us into a life characterized by legalism, perfectionism, and works righteousness—the very life Jesus freed us from at the cross!

Gilbert gives a great analogy of this dynamic:

Consider this: In the design of a car, there is a profound difference between the driver of speed and the confirmer of speed, between the accelerator and the speedometer. If we want the car to go faster, we push on the accelerator; we put weight on it, and the car goes. Now of course when we do that, one of the results is that the speedometer on the dashboard indicates, or shows, or confirms that the car is going. But the speedometer is a sign of speed, not the source of speed. If we want more speed, we can’t just raise our hand to the dashboard and use our fingers to push the needle up and expect the car to go faster.

Stronger assurance, in other words, doesn’t mainly come by staring at the speedometer but by stepping on the accelerator, not by piling up good works but by rehearsing the gospel of Christ and the promises of God.

I want to focus on the promises of God and the reason God is determined to keep those promises. Gilbert explains how God’s Word presents God’s promises as a “powerful source and driver of assurance,” encouraging us to “trust them, rely on them, and continually deepen our understanding of them.” He states:

Think about how Paul describes Abraham’s faith in Romans 4. Abraham became “fully convinced that God was able to do what he promised” (v. 21), and as he did so, “he grew strong in his faith” (v. 20).

The more Abraham became fully convicted and convinced of God’s promise, the more he grew in faith and assurance. We see the same logic in Hebrews. “Holding fast to our confession without wavering” is possible only because “he who promised is faithful” (Heb. 10:23). The Promiser is faithful to keep his promises. Resting in his faithfulness enables us to hold fast to our faith without wavering in doubt, despair, or unbelief.

“What are these promises?” you may ask. Here are two Gilbert highlights:

The Lord of the universe has promised that those who repent and put their faith in Jesus will not only be saved from destruction, but will be preserved by his omnipotent hand and bought safely into glory.

Gilbert anticipates a good question about the promises of God:

Why is God so determined to keep his promises, especially his promise to save and preserve all those who come to Christ in faith? In other words, why can’t he just simply say “Never mind” at some point? What grounds God’s determination to keep those promises?

His promises are rooted in the nature of who he is. Gilbert writes, “Simply put, it would be flatly incompatible with his nature—indeed, with his identity—for God to break or revoke his promises.”

In Titus 1:2 Paul makes it clear that God doesn’t lie and connects this character to God’s promises. Numbers 23:19 shows the same logic—God can be trusted and will do all he’s said he would. Hebrews 6:18 also connects God’s truthfulness to our perseverance.

2. God’s Unbreakable Devotion to His Son

God’s resolve to keep his promises is as strong as his resolve to exalt his Son. Gilbert writes:

If [God] failed somehow to keep his promise to believers to the end and raise them up on the last day he wouldn’t just be failing believers; he would be failing Jesus. And that will never happen! You see? If you are a believer in Christ—united to him by faith—then your salvation is not ultimately grounded in your waffling, wavering commitment to him. It’s grounded in God’s eternal, unbreakable determination to honor his son by saving you. That’s why not one of those the Father has given him will be lost.

Do we see how amazing that is? God’s honoring of his Son includes his promises to you and me. His will for Jesus includes our preservation (John 6:37–40). They’re inextricably linked, and we are inextricably connected. This is comforting news!

As I read this book, I thanked God for delivering me a message I didn’t know I needed. His promises aren’t a fluctuating speedometer but a steady accelerator we can press into to enjoy a more settled sense of assurance. And the more we press into his promises, the more the ominous fear of looming apostasy fades and the shining light of assurance—that the Lord of love will keep us to the end—shines through.

God always keeps his promises, friend, and he won’t break his streak with you.

Ameen Hudson is a writer and speaker who focuses on the intersection of theology, art, and culture. He’s also the co-host of the Southside Rabbi podcast. He and his wife are members of Living Faith Bible Fellowship in Tampa, Florida.