After nearly dying last year, Jordan Peterson is back with a sequel to his bestselling 12 Rules for Life. Titled Beyond Order: 12 More Rules for Life, it’s packaged as a complement to the first. Whereas 12 Rules for Life offered order as “an antidote to chaos” (its subtitle), this book seeks to move “beyond” that order. Is it then the chaos book? Almost, but not quite.

Beyond Order is indeed the yin to the previous yang. The packaging of the books gives this away, as the two have identical cover designs except that the first is white while the second is black. Peterson had referred to this arrangement in the introductory overture to his first book, and he calls that first book a work of “ordering principles.” But Beyond Order is not chaos so much as balance.

Yes, it does have the black cover, and it was written during a chaotic time in Peterson’s life. It also repeatedly emphasizes the need for creative transformation, the need to change when the status quo has become corrupt. This isn’t chaos, however, but rather liberated continuation of the original spirit and intention of the rules. People can “break the rules ethically” but only after they “have mastered them first and disciplined themselves to understand the necessity of those rules” (85). 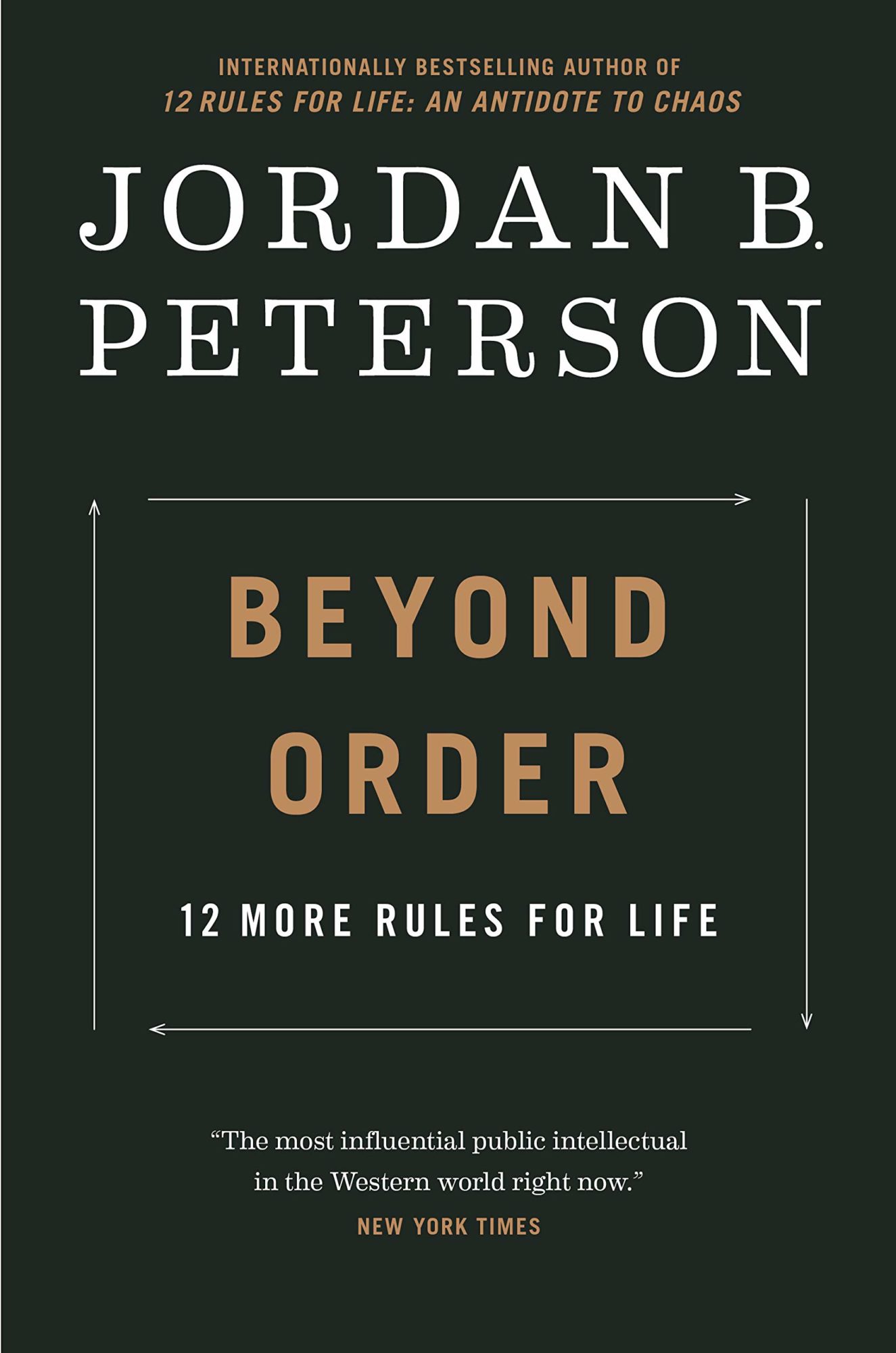 Beyond Order: 12 More Rules for Life

Beyond Order: 12 More Rules for Life

In 12 Rules for Life, Dr. Jordan B. Peterson, clinical psychologist and professor at Harvard and the University of Toronto, helped readers impose order on the chaos of their lives. Now, in this sequel, Peterson delivers 12 more lifesaving principles for resisting the exhausting toll that our desire for order the world inevitably takes.

In a time when the human will increasingly imposes itself over every sphere of life—from our social structures to our emotional states—Peterson warns that too much security is dangerous. What’s more, he offers strategies for overcoming the cultural, scientific, and psychological forces causing us to tend toward tyranny, and teaches us how to rely instead on our instinct to find meaning and purpose, even—and especially—when we find ourselves powerless. While chaos, in excess, threatens us with instability and anxiety, unchecked order can petrify us into submission. Beyond Order provides a call to balance these two fundamental principles of reality, and guides us along the straight and narrow path that divides them.

Ultimately, Peterson wants “balance between conservativism and originality” (34). He admits this can be paradoxical, but he sees such a balance as constitutive of the nature of reality: “these two modes of being are integrally interdependent. One cannot truly exist without the other, although they exist in genuine tension” (35).

Between Chaos and Excessive Order

Chaos remains the villain in Peterson’s worldview, as is made clear by his retelling of the Enuma Elish, the myth of Osiris and Horus, or even Harry Potter and Sleeping Beauty. When chaos triumphs over order, there is pain, death, and horror. But the additional layer that Beyond Order adds is that one must beware of an excessive form of order. The imbalanced, uncompromising drive for control will end in tyranny, and thus more pain and horror.

This is illustrated in a particularly delightful way by Peterson’s interpretation of Peter Pan. The character of Peter is “potential itself,” but a potential that refuses to actualize and become “something meaningful, productive, long term, and sustainable” (115). As such, he is still chaos. But his opposite is Captain Hook, “the archetypal Tyrannical King, the pathology of order” (115).

Hook is an adult (and with a classical education, at least in the original J. M. Barrie version of the story), yet he is crippled by his fear of death, scared of the crocodile who has swallowed a clock. Peterson argues that Peter cannot “grow up” precisely because the opposing model for order is so imbalanced.

But the solution is not to embrace chaos but rather to embrace the potential conflict that comes in the battle to overcome that chaos. Peterson wants his reader to “confront what stands in your way” (86), whether that means subduing chaos through ordering principles (the primary burden of the first book) or by “break[ing] the rules ethically” (85).

Wisdom in the Rules

While clearly existing in tandem with 12 Rules for Life, Beyond Order can be read on its own. In my opinion, it’s the stronger work with several outstanding chapters. Rule 6, “Abandon Ideology,” is extremely applicable to several contemporary controversies and is perhaps the best chapter in the book. “Ideology” isn’t synonymous with “religion” for Peterson, contrary to the way many critics of religion might use such words. Instead, Peterson defines ideology as idolatry, the totalizing absorption of nearly all of life under a particular theory.

“The ideologue begins,” Peterson explains, “by selecting a few abstractions in whose low-resolution representatives hide large, undifferentiated chunks of the world” (168–69). He offers “the nation,” “the patriarchy,” “the rich,” and “the oppressed” as some examples, among others. These concepts refer to highly complex realities, but the ideologue simplifies them under the abstraction. “Next, the faux theorist spins a post-hoc theory about how every phenomenon, no matter how complex, can be considered a secondary consequence of the new, totalizing system” (170). This then develops into a “school of thought” all its own, whereas its proponents use the ideology “to attain dominance” and “criticize . . . or explicitly demonize” any who refuse to accept it (170). Understanding how ideology functions is an essential life skill for today—as well as the fact that ideology is not actually a theory in the sense of being open to testing and falsification (all in the hopes of the higher pursuit of wisdom), but is instead a means of amassing power.

Understanding how ideology functions is an essential life skill for today, as well as the fact that ideology is . . . a means of amassing power.

This sort of critique doesn’t only address left-wing ideologies, though such are in plentiful supply. One could also apply it to conservatives who too quickly categorize something as “Marxism” or a fruit of Marxism. (Some skeptics have even said this about Peterson, it should be noted.) The point isn’t simply to disarm one side of the ideology battle, but to explain what ideology is and why it’s not a truly ordering concept but rather a tool of tyranny and chaos.

Another high point is Rule 10, which addresses romance and marriage. Pastors will be tempted to photocopy it and hand it out to their church members. It’s as good as most leading Christian marriage books. Peterson gives realistic advice on conflict resolution, lovemaking, and even traditional gender roles.

“Traditional roles are far more helpful than modern people, who vastly overestimate their tolerance for freedom and choice, tend to realize” (290). Should we press the yang/yin paradigm into human sexuality? Don’t try this at home, but yes, Peterson does (the yang and the yin are also gendered in their original Taoist setting). Throughout it all, Peterson avoids legalism or one-size-fits-all prescriptions, offering instead the ordering principles that allow one to appropriately handle conflict in a way that produces growth in maturity.

What Should Christians Make of Peterson?

Many will ask the obvious question “Is Beyond Order a Christian book?” The answer is “almost, but no.” Creation, sin, death, and resurrection are all emphasized, but atonement isn’t easily found. Peterson even uses the language of “Satan” as well as “sin.” But these words don’t mean what traditional orthodoxy would mean by them. For Peterson, the big problem isn’t sin against nature. It’s nature itself.

A few examples: “nature can and constantly does revert . . . into total chaos” (313). Also, “nature is doing her best to kill us” (336). Most troubling of all, Peterson suggests that “Christ and Satan are a pair representing an even more fundamental duality. . . . Christ and Satan are elements of personified (deified?) eternity itself” (334; the parenthetical question is Peterson’s).

It seems that Peterson has pressed his basic dualism into the divine, with an eternal Being (indeed, he capitalizes this noun) who is a constant dialectic of order and chaos that comes into purer being through individuals persevering through the struggle. As he writes, “there is a call to the strength of Being—the Being that could manifest itself in you” (366). This is more Taoist than Christian, more Hegelian than Augustinian. If pressed into a Christian mode, it would have to be a species of Gnosticism.

Creation, sin, death, and resurrection are all emphasized, but atonement is not easily found.

On a more heartening note, Peterson concludes his book with a mediation on gratitude. Instead of giving in to bitterness or resentment, Peterson says we must give thanks. This suggests he may not be far from the kingdom; but in Beyond Order at least, he’s not there yet. Perhaps some of his comments after the book’s release indicate his journey continues.

Of course, these religious remarks are not fair criticisms of Beyond Order, since it doesn’t advertise itself as a Christian book. It’s a sort of perennial wisdom of the world, the best the Gentiles have to offer. Peterson should be considered a sort of modern-day natural-law philosopher. And in that sense, it really is a good book.

“Eat the meat and spit out the bones,” as the old saying has it, but a person who knows his way around a fried catfish can usually remove the whole skeleton with a single pull. So too with Peterson’s work. A Christian reader can make even better sense of what Peterson is after by contextualizing it all within the cognitive framework of the creature-Creator distinction and the metaphysical reality of the fall. By this, I mean that nature was originally good, and that chaos wasn’t an impending evil, but this original good creation was subjected to chaos because of sin. The reality that Peterson calls “nature,” is actually fallen nature. And this fallen nature will ultimately be redeemed by the saving work of God in Christ. Peterson gives great advice for “life under the sun,” as Solomon might call it, but the gospel assures us that this isn’t the last word. Beyond Order, therefore, doesn’t offer saving grace, but it can offer helpful guidance for living within the realities of a sinful world.

Peterson could see this too, if he continues reading the Bible he’s clearly fascinated by. And so as we chew on Peterson’s book, let’s pray he begins to inwardly digest God’s.

Steven Wedgeworth (MDiv, Reformed Theological Seminary) is associate pastor of Faith Reformed Presbyterian Church in Vancouver, Canada. He is the founder and general editor of The Calvinist International, an online journal of Christian humanism and political theology, and a director of the Davenant Trust. He is married to Anna, and they have three children.