Demons are the disembodied spirits of the Nephilim, the wicked offspring of marriages between humans and angels before the flood—so argues Michael Heiser in his latest book. If that sounds extremely weird, well . . . yes, precisely. Weird is Heiser’s specialty.

Demons: What the Bible Really Says About the Powers of Darkness continues the main themes of Heiser’s previous writings, particularly Reversing Hermon and The Unseen Realm. As the title would suggest, Demons investigates the identity and meaning of evil spiritual powers generally, but it does so as it continues to explore Heiser’s career project, the role of the “sons of God” intermarrying with the “daughters of men” in Genesis 6.

In this book, Heiser—formerly a scholar-in-residence for Faithlife Corporation (Logos) and now leads the Awakening School of Theology—seeks to show how the events immediately before the flood relate to both territorial deities or demi-gods in the ancient world and also the more familiar demon-possession accounts we see in the Gospels. As such, Demons is more a survey of cosmic warfare in general, and the spiritual aspects to the history of redemption, than it is a simple introductory study of demons. 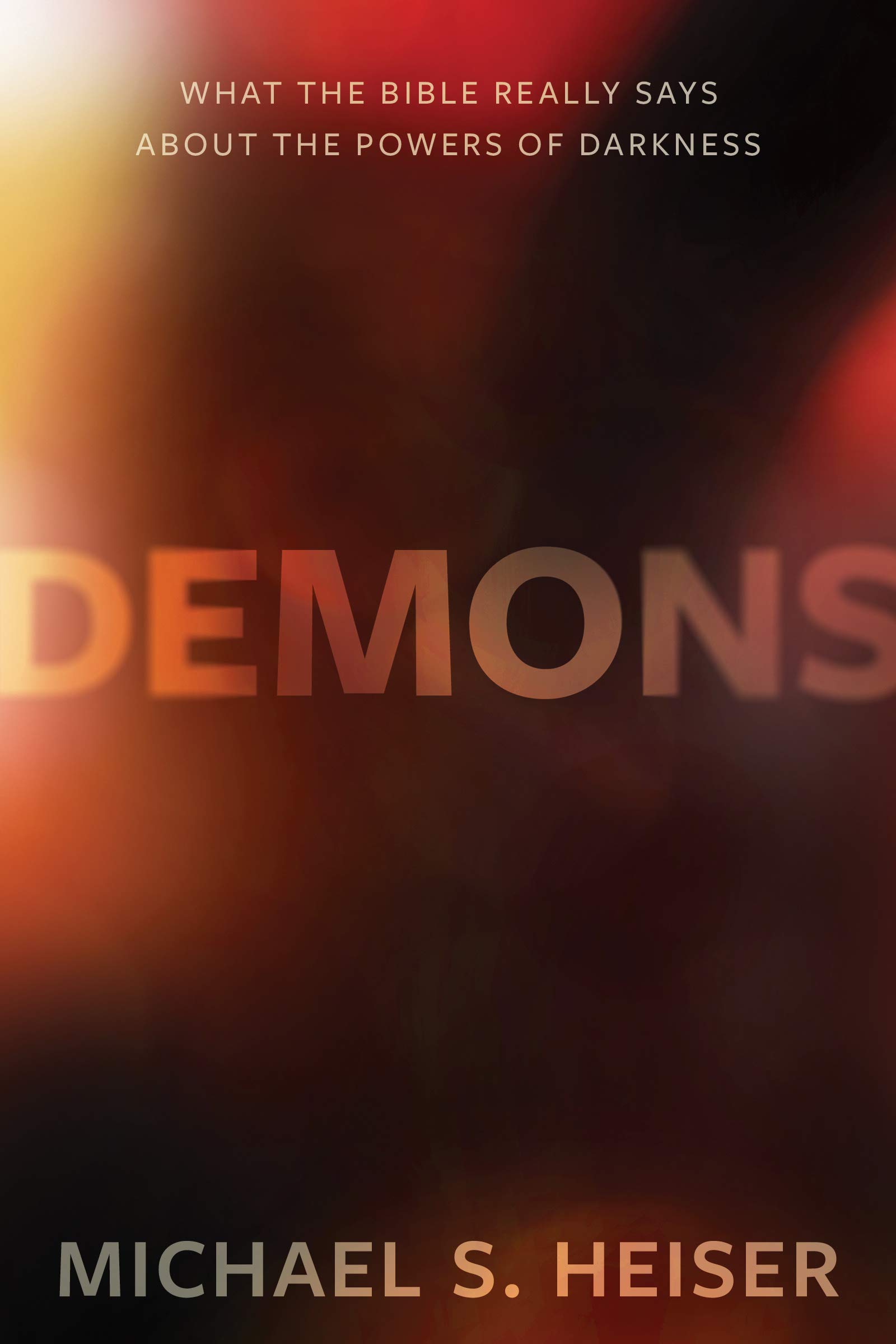 Demons: What the Bible Really Says About the Powers of Darkness

Demons: What the Bible Really Says About the Powers of Darkness

Are demons real? Are they red creatures with goatees holding pitchforks and sitting on people’s shoulders while whispering bad things? Did a third of the angels really rebel with Satan? Are demons and “principalities and powers” just terms for the same entities, or are they different members of the kingdom of darkness? Is the world a chaotivc mess because of what happened in Eden, or is there more to the story of evil?

In Demons, Michael Heiser debunks popular presuppositions about the very real powers of darkness. Rather than traditions, stories, speculations, or myths, Demons is grounded in what ancient people of both the Old and New Testament eras believed about evil spiritual forces and in what the Bible actually says. You’ll come away with a sound, biblical understanding of demons, supernatural rebellion, evil spirits, and spiritual warfare.

The central argument of the book is found in Heiser’s explication of the three divine rebellions. These three rebellions are: (1) Satan’s initial rebellion against God, (2) the “sons of God” in Genesis 6 leaving heaven to take human wives, and (3) the divine council abusing their territorial rule over the nations and turning it into a sort of rivalry against the true God. For Heiser, this threefold framework explains the majority of the Bible’s spiritual-warfare passages, and it clarifies the difference between Satan, false gods, and demons. For readers unfamiliar with Heiser’s previous work, this description will sound extremely strange and perhaps shocking. Yet the material is important and largely consistent with a broad sampling of relevant Ancient Near Eastern religious literature, as well as Second Temple Jewish and early Christian sources. Heiser is indeed weird, but his scholarship fits in the parameters of a well-established field of study.

The first cosmic fall has to do with the origin of Satan. This figure, who Heiser admits is actually rather obscure in the Old Testament, was originally a member of the divine council, an elohim, who decided to rebel against God’s governance and was thus expelled from the divine council (63–64, 81). Drawing from Isaiah 14 and Ezekiel 28, Heiser describes Satan as “a divine throne guardian who wished to rule instead of being ruled” (81). Satan’s successful temptation of Adam and Eve brought humanity into a state of sin and misery, and it initiated cosmic warfare between Satan’s powers and God’s.

The second fall has to do with the “sons of God” in Genesis 6, which Heiser interprets through the lens of Hellenistic Jewish literature like 1 Enoch and the ancient Mesopotamian story of the apkallu (115–24). These “sons of God” are members of the divine council who come to earth out of lust for human women. Their offspring are the Nephilim, which Heiser argues are giants (121). These giants are killed in the flood, and their spirits are then punished by being cast down to the underworld (123). Importantly, Heiser argues that the disembodied spirits of these cursed Nephilim go on to become the “demons” of the New Testament Gospels (126, 137, 139, 242). This is a controversial reading of Genesis 6, though it has gained wide acceptance among biblical scholars in recent years. It’s the most important part of Heiser’s argument and provides the core support for his overall thesis.

[This is] the most important part of Heiser’s argument and provides the core support for his overall thesis.

The third fall in Heiser’s paradigm has to do with the aftermath of the Tower of Babel and the assigning of guardian or governing spirits to each nation. After separating the nations through judgment at Babel, God also “allotted” the nations to “lesser gods—‘sons of God’ among Yahweh’s heavenly host” (148). Israel wasn’t assigned any of these lesser gods. Rather the Most High God, Yahweh himself, reigned over them directly (149). The lesser gods assigned to the Gentiles nations were intended to be administrators, governing on Yahweh’s behalf; instead they rebelled and began claiming divine worship for themselves (151).

Heiser sees support for this in Psalm 82. There God pronounces judgment on members of the divine council, called “gods, sons of the Most High” in Psalm 82:6. Heiser also argues that multiple intertestamental texts support this reading, particularly Ben Sira, Jubilees, 1 Enoch, and various Dead Sea Scrolls. The rebellious “gods” over the nations then account for the principalities and powers with whom the New Testament church is at war (215, 219). Heiser explains Jesus’s victory this way: “the ruling authority of the gods allotted to the nations was declared illegitimate and null by the work of Christ” (229). The giving of the Holy Spirit to the church enables God’s people to move throughout the world, overthrowing the false rule of the gods (226), and the book of Revelation depicts the final conflict between the true God and all false gods, including Satan (187–89).

Demons is full of fascinating material. The first section provides the most purely empirical study, and readers will be greatly helped in seeing just how many biblical passages refer to Satan, rival spiritual powers, or demons. A theme that many may have assumed to be a sort of side-story becomes much more prominent when all of the relevant texts are made clear. Heiser also provides an excellent introduction to many important extrabiblical texts. Simply for these reasons, pastors and serious Bible students will want to read Demons. Heiser’s work is also a helpful way for a general audience to be introduced to the material from 1 Enoch and other intertestamental Jewish literature that has recently become prominent in biblical studies.

Still, there’s no way to deny that Demons will prove contentious for many.

Heiser provides an excellent introduction to many important extrabiblical texts. Simply for these reasons, pastors and serious Bible students will want to read Demons.

Heiser’s reading of Genesis 6 is still a controversial one, indeed a minority position in light of church history. For many, the more “traditional” reading—of the sons of God being the lineage of the godly—will prove more persuasive. Heiser dismisses this reading as an imposition by extrabiblical concerns, failing to note scholars who have demonstrated how such themes and patterns arise from within the biblical narrative—namely, the promise of a godly seed to Eve and the developing role of the covenant. Indeed, Heiser’s view repeatedly draws on extrabiblical sources, which set the defining terms and categories. An intracanonical case can be made that a human reading of “the sons of God” better fits the context of Genesis itself, especially the “two seeds” motif that begins in Genesis 3:15 and continues to appear throughout the book (for more on this argument, see John Currid’s Genesis, especially vol. 1:129–30, 174).

One might also wonder why the Bible seems to present giants as continuing to exist after the flood, even connecting them to Satan (Goliath is described as serpentine in 1 Sam. 17:5), if the Nephilim were all cast into the underworld. Considering only the methodology, Heiser’s case appears fragile. His central argument about demons entirely depends on his reading of one of Scripture’s most perplexing and divisive passages. If that reading is wrong, his project fails.

Further, Demons raises a number of questions about the role and integrity of the canon. Heiser frequently notes problems in the Masoretic text of the Hebrew Old Testament, preferring variant readings, especially for Deuteronomy 32—which majorly supports his “third cosmic fall” argument. Once more, a central part of his argument rests on a disputed textual foundation. But even more, Heiser sometimes argues that infelicitous human translations of the Old Testament made their way into the New Testament itself, thus obscuring the true meaning of the spiritual material. For example: “The New Testament has fewer words for the powers of darkness and loses some of the nuanced presentation of evil spirits found in the Old Testament” (2). This need not mean that Heiser doubts the divine inspiration of the Bible, but it does suggest that portions of Scripture are contingent on partial errors in history, thus rendering their full meaning lost to centuries’ worth of readers.

His central argument about demons is entirely dependent on his reading of one of Scripture’s most perplexing and divisive passages. If that reading is wrong, his project fails.

For Heiser, the way to get the most clarity on biblical meaning isn’t to use the New Testament to illuminate the Old, while consulting the catholic Christian tradition. He suggests, rather, to interpret the New Testament through a paradigm set by re-reading the Old Testament in light of fundamental categories taken from extracanonical ancient literature. This isn’t unusual for academic biblical theology, but it certainly gives the average pastor cause for concern, and it explains why Heiser’s work should be handled with care.

Demons is a thought-provoking book that can help pastors and educated lay readers come to a new appreciation for the spiritual world as presented by the Bible. It will certainly raise new questions and introduce big ideas that can be pondered for years to come.

But it’s also a book that’s best not recommended to a broader audience. Pastors should glean from Heiser’s keenest insights while still keeping their feet grounded in the old basics.

Steven Wedgeworth (MDiv, Reformed Theological Seminary) is associate pastor of Faith Reformed Presbyterian Church in Vancouver, Canada. He is the founder and general editor of The Calvinist International, an online journal of Christian humanism and political theology, and a director of the Davenant Trust. He is married to Anna, and they have three children.