I’ll never forget when I realized I didn’t believe in angels.

It was 2006, and I was reading C. S. Lewis’s Out of the Silent Planet for the first time. In the book, Edwin Ransom is taken to Malacandra (Mars), where he encounters intelligent beings called eldila, the chief of whom is the Oyarsa.

Because the story dealt with rocket travel through outer space to an actual planet, I had a ready category for these beings: aliens. And since aliens had always been implausible to me anyway, I had no trouble suspending my disbelief. Then Lewis dropped a clear biblical allusion, and my eyes were opened.

Ransom meets the Oyarsa, who explains to him that the Silent Planet Thulcandra is actually Earth, and that it became silent when its Oyarsa became “bent.” There are rumors, however, that “Maleldil” (Jesus) has pulled off an amazing rescue:

We think that Maleldil would not give it up utterly to the Bent One, and there are stories among us that He has taken strange counsel and dared terrible things, wrestling with the Bent One in Thulcandra. But of this we know less than you; it is a thing we desire to look into.

With this clear reference to 1 Peter 1:12, it finally dawned on me that these were not aliens. That passage speaks of the gospel events as “things the angels desire to look into” (KJV).

All along, I had been reading about angels and chalking it up to science fiction. I simply didn’t have room in my cosmology for intelligent, invisible, spiritual beings other than God. Not really. Angels existed in the Bible, not in the “air” and certainly not on other planets in our solar system. I had effectively cut angels out of the “real” cosmos.

Ever since that shocking realization, I’ve paid closer attention to what the Bible says about angels, as well as to what older Christian writers have said about them. I’ve even thought about writing a book.

But thanks to Michael Heiser, now I don’t have to.

Heiser is scholar-in-residence for Faithlife Corporation, the company that gave us Logos Bible software. He wrote his doctoral dissertation on the role of angels as “the divine council” (Ps. 82:1), and has since carved out a niche for himself as an expert in the supernatural and paranormal.

His latest book, Angels: What the Bible Really Says about God’s Heavenly Host, is a tour de force tackling everything from the angel of the LORD in Genesis to the angels of the seven churches in Revelation. Written at an intermediate level, Angels offers a thorough account of angels in the Old and New Testaments, as well as in Second Temple Jewish literature. He concludes with a chapter of miscellaneous myths and questions about angels.

Biblical angels are more like Poseidon than Precious Moments.

My only gripe about the book is Heiser’s tendency to cast “Christian tradition” as the bogeyman, with ancient Near Eastern studies as the savior (xiii, xix, 42). Derek Rishmawy refers to this as Heiser’s “frustrating case of biblical studies prejudice.” Perhaps by “tradition” Heiser means the cheesy stuff he heard as a kid. But if he means Athanasius, Aquinas, and Luther, then, as Rishmawy points out, it’s hard to get more supernatural than these guys. 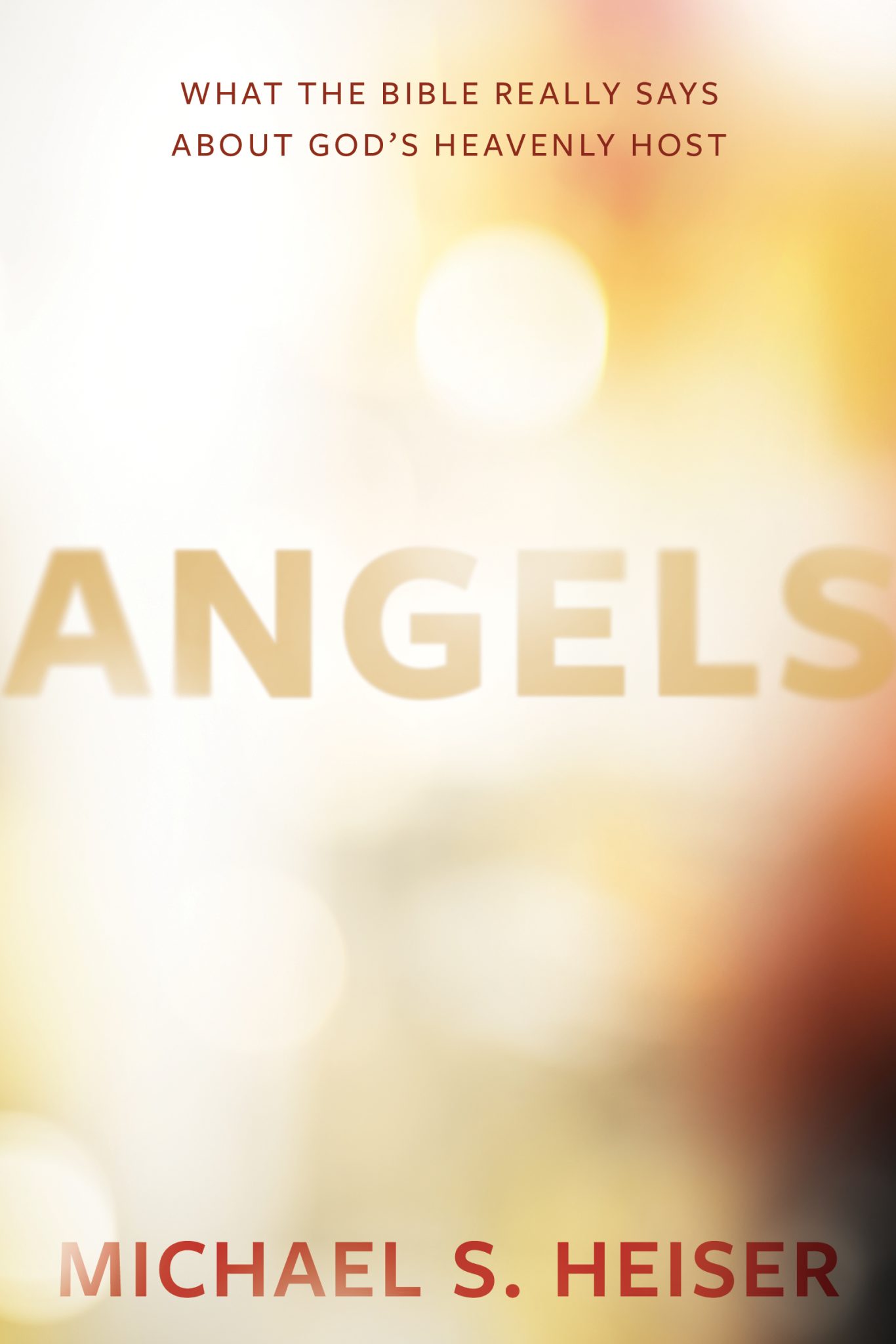 Angels: What the Bible Really Says about God’s Heavenly Host

Angels: What the Bible Really Says about God’s Heavenly Host

In his latest book, Angels, Heiser reveals what the Bible really says about God’s supernatural servants. Heiser focuses on loyal, holy heavenly beings because the Bible has a lot more to say about them than most people suspect. The Bible’s view on heavenly beings begins with Old Testament terms but then moves into literature from the Second Temple period. This literature influenced the New Testament writers in significant ways. With that important background established, the book focuses on what the New Testament tells us about God’s holy ones. Finally, the book reflects on common misconceptions about angels and addresses why the topic is still important and relevant for Christians today.

Chapter 1 surveys the Old Testament (OT) terminology for the heavenly host, structured around terms that describe their nature (what they are), their status (how they rank), and their function (what they do). One might be taken aback by how many terms there are besides “angel.” For their nature, they’re spirits, heavenly ones, stars, holy ones, and gods (2–12). For status, they’re described in terms of an assembly, council, congregation, and court (13–17). And for function, there are words like angel, minister, watcher, host/mighty ones, mediator, cherubim, and seraphim (17–27). He concludes by noting that

talk of “angels” in the Old Testament is both too simplistic and incomplete. We are of course accustomed to that term, but it fails to do justice to how an Israelite would have thought about the spiritual world. (27)

Particularly interesting is his discussion of angels as “gods.” The OT doesn’t reserve the word elohim (God/gods) for God alone (see Ps. 8:5; 82:1, 6). Rather, it uses the word broadly for “any entity that is not embodied by nature and is a member of the spiritual realm” (12). But neither does the OT teach polytheism. Rather, it distinguishes the one true Elohim from the lesser elohim in other ways. He’s eternal; they’re not. He created them; not they him. He is worshiped by them; never they by him. Still, they’re gods in a lesser sense. This language can remind us that biblical angels are more like Poseidon than Precious Moments.

What Do They Do?

Chapter 2 outlines the OT picture of what angels do.

As participants in God’s heavenly council, they contribute to council resolutions, bear witness to his decrees, and assist in his governance of the world (33–46). They also deliver his decrees, explain his activity, and execute his judgment (46–55). They’re both the “heavenly bureaucracy” (13) and “God’s task force” (56). And perhaps most familiarly, they’re God’s heavenly worship team, praising him day and night (55–56).

With regard to angelic participation in God’s decrees, Heiser seems to hold to a libertarian view of freedom (35, 49). But compatibilists like myself should still profit from his analysis of angelic activity. The fact that I once asked the quasi-deistic question “What would they do?” suggests that we need to work harder to include angels in our concept of secondary causality, in providence as well as in miracles (104; Rev. 16:5).

Why Does It Matter?

From the opening page, Heiser is aware that the obvious question is “Who cares?” (xiii). Despite obsession with angels in some quarters, for many Christians the Bible’s storyline could be told with nary a reference to angels at all. And to some degree, that’s understandable. As Heiser gladly affirms,

The emphasis of what the Bible says about the intersection of heaven and earth is, understandably, God himself. . . . Though an integral part of how Scripture shows God’s will being carried out on earth, the heavenly host’s service operates like a computer program running in the background. (57)

Still, it’s hard for me to imagine many Western Christians today speaking like Paul does in 1 Timothy 5:21, where he charges Timothy not only in the presence of God and Christ Jesus, but also in the presence of the elect angels. They’re just not part of the furniture of our minds the way they were for Paul. We’re not nearly so conscious of their presence. I suspect we fear that a greater awareness of them would distract us from God or make us superstitious (both of which could happen, of course).

Angels aren’t the main thing in the Bible, but they’re present in supporting roles from beginning to end, and it’s helpful to think through the Bible’s storyline with particular reference to them.

Angels aren’t the main thing in the Bible, but they’re present in supporting roles from beginning to end, and it’s helpful to think through the Bible’s storyline with particular reference to them.

If we start at the beginning, John Owen notes that God “provided himself [with] two distinct, rational families,” angels and men. Heiser suggests that both were made in God’s image, albeit with man a little lower than the angels (xv–xvi). Still, both families were on the same side—God’s side. But then a great rupture occurred. Some angels rebelled, followed by all men.

In his sovereign justice, God passed by the fallen angels, offering no redemption (152; Heb. 2:16). But in his great kindness, he carried out an eternal plan in which the Son of God became lower than the angels by assuming human nature, so that through death he could defeat the evil angels and redeem his human brothers (Heb. 2:5–18).

Despite obsession with angels in some quarters, for many Christians, the Bible’s storyline could be told with nary a reference to angels at all.

In the meantime, the holy angels serve us (Heb. 1:14), since Jesus has reconciled us and placed us back on the same team. Though torn asunder by rebellion, God’s two families have been made one again in Christ Jesus. And so, far from envying the grace shown to us, they rejoice in our repentance (Luke 15:10), obsess over our salvation (1 Pet. 1:12), and marvel at God’s manifold wisdom in forming one church out of many warring peoples through the blood of his cross (Eph. 3:10; 2:11–22).

Contrary to popular belief, we’ll never become angels. But we’ll meet them in glory as all things in heaven and earth are united in Christ (Eph. 1:10). We’ll gather with them around the throne to worship our mutual Father and King (Rev. 7:9–12). And we will “join [them] in a blended divine family and actually outrank [them] in a new global Eden” (177).

The Oyarsa was right. Maleldil hasn’t given us up to the Bent One. He has dared terrible things for us and taken strange counsel. The angels long to look into God’s plans for us, the redeemed. Let us occasionally return the favor.