What is essential to the Christian life? What beliefs and practices do believers in all stages of growth need to be called to again and again throughout their lives?

In two recent works, Rowan Williams—former Archbishop of Canterbury (2002–2012)—distills the Christian life into a few basics. In Being Christian, Williams focuses on baptism, the Bible, Eucharist, and prayer. In Being Disciples, he offers brief comments on the triad of faith, hope, and love as well as forgiveness, holiness, engaging culture as Christians, and walking in the Spirit.

Both books are short and, even if you’re a slow reader like me, can be read in less than two hours apiece. And each comes with glowing endorsements. Justin Welby—the current Archbishop of Cantebury—claims Being Disciples is “the most beautiful writing on discipleship” he knows. Walter Brueggemann speaks highly of each, praising Being Christian as a “clear and accessible exposition” that represents “Williams at his best.”

Unfortunately, I can’t agree with Welby and Bruggeman. Don’t get me wrong; I really want to. I’m always on the hunt for well-written works on Christian discipleship to recommend. But neither of these will land on my list of recommended reading for 2017. Here’s why.

While a reviewer must exercise caution when critiquing an author for what he didn’t say, there’s one area where the missing element was crucial to the book’s main subject matter. Christian discipleship, if it’s to be Christian at all, must begin with the gospel. And if the Reformation has taught us anything, it’s that Christian discipleship consists principally in the gospel’s application to every area of life.

Christian discipleship, if it’s to be Christian at all, must begin with the gospel.

Williams uses the word “gospel” throughout both books, but he appears to assume—rather than articulate and assert—its meaning. For instance, at no point is the reader challenged or encouraged by the truth that progress in discipleship is built first on our justification—God’s declaration of our legal standing through the righteousness of Christ. Conversely, if we proceed in our attempts at Christian discipleship without rectifying our legal status with God through Christ, all our religion will only aggravate—not improve—our condemnation. But these are not the categories in which Williams frames his reflections, although Article IX (“Of Original Sin”) and XI (“Of the Justification of Man”) of the Thirty-nine Articles would guide Anglicans to begin here.

At this point one might argue I’m being unfair to Williams because he doesn’t use the same words and maintain the same emphasis that I do. I’m aware of the possibility of failing to read and understand someone on his own terms and, as I’ve already noted, critiquing a writer for what he didn’t say.

But there’s also value in using Christian discipleship as a test case for what happens when we depart from a full-orbed understanding of the gospel and the authority of Scripture. Williams, despite the sound confessional framework of much of the Anglican Church’s Thirty-nine Articles, articulates a vision for Christian discipleship from outside these theological parameters, and that’s precisely the problem.

Eucharist without Forgiveness of Sin?

We observe the effect of Williams’s doctrinal neglect in his discussion of the Eucharist (Being Christian, 41–60). To Williams, the Lord’s table is a celebration of belonging, of communion with Christ, of welcoming others, of solidarity, of God’s mercy. The Lord’s table provokes remembrance and produces repentance, and it draws us out of self-absorption and pride. And to each of these aspects of the Lord’s table—understood in their proper theological context—the Christian can say, “Amen.” 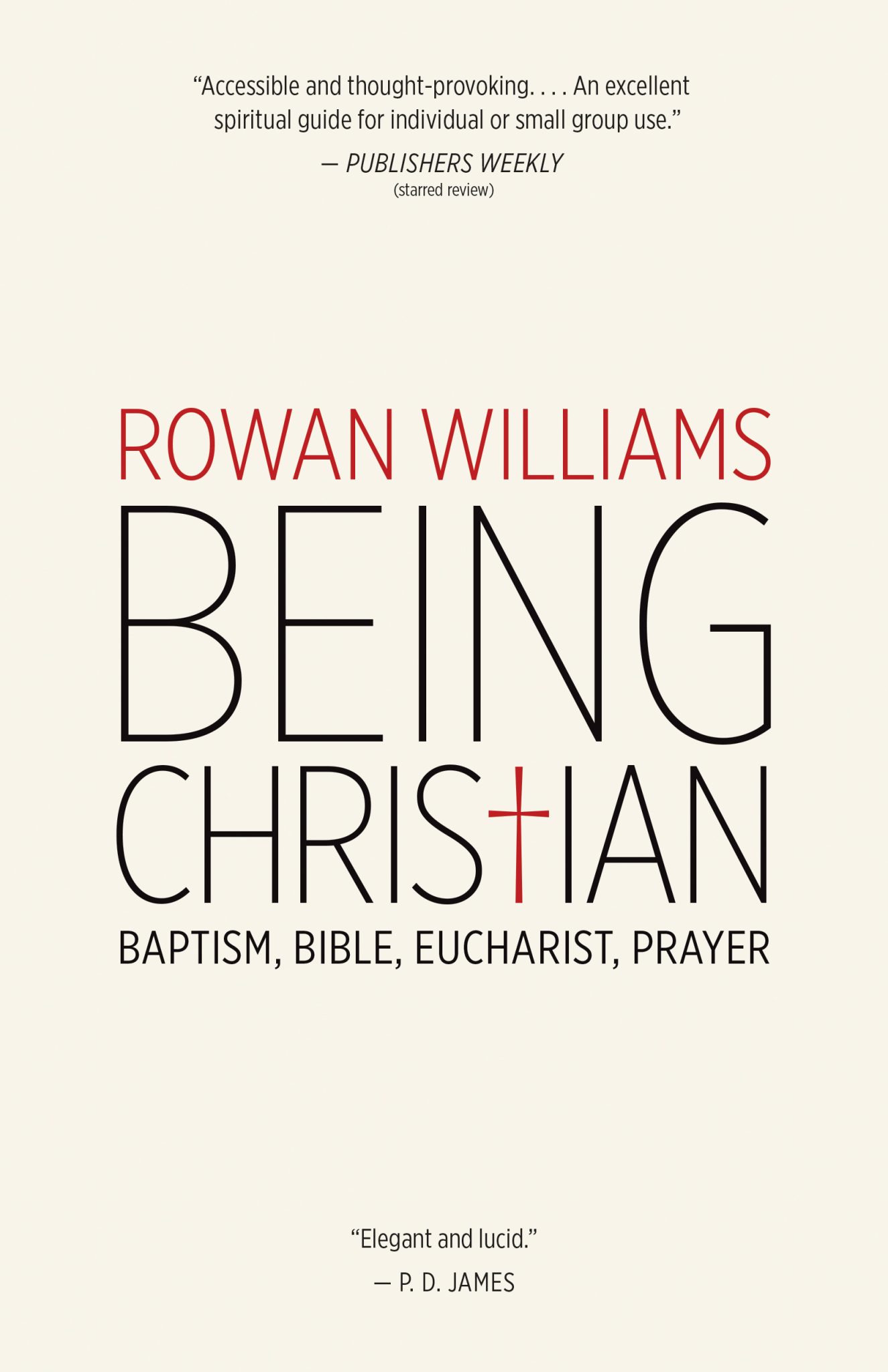 In this simple, beautifully written book Rowan Williams explores four essential components of the Christian life: baptism, Bible, Eucharist, and prayer. Despite huge differences in Christian thinking and practice both today and in past centuries, he says, these four basic elements have remained constant and indispensable for the majority of those who call themselves Christians.

In accessible, pastoral terms Williams discusses the meaning and practice of baptism, the Bible, the Eucharist, and prayer, inviting readers to really think through the Christian faith and how to live it out. Questions for reflection and discussion at the end of each chapter help readers to dig deeper and apply Williams’s insights to their own lives.

But something is missing when, in an entire chapter dedicated to embedding the Eucharist into Christian discipleship, the atonement or the forgiveness of sins isn’t given so much as a sentence. Solidarity with believers? Yes. Communion with the living Christ? Definitely. The recognition of God’s mercy? Of course! But only if our celebration of Christ’s death includes a hearty acknowledgement of what it accomplished. The table is, as Article 28 reminds us, “a Sacrament of our Redemption by Christ’s death.”

Drawing from Old Testament expectations of a substitutionary atonement, Christ told his disciples on the eve of his crucifixion that his blood, represented by the cup, was about to be poured out for the forgiveness of sins according to the New Covenant (Matt. 26:28). Subsequent celebrations, therefore, would include this central aspect of the table (see 1 Cor. 11:25–26; cf. Jer. 31:34). Without attention to these theological categories, we’re allowed to make the Lord’s table whatever we want it to be, even to the point where it becomes nothing more than a religious social event.

Forgiveness as a topic is broached in Being Disciples in a chapter aptly titled, “Forgiveness” (37–46). But horizontal forgiveness—Christians extending forgiveness to and receiving forgiveness from others—is the primary focus. Again, without the objective work of Christ anchoring the discussion, we’re left to drift into treacherous doctrinal waters. The most alarming words come about halfway through the chapter. In an attempt to distance the concept of forgiveness from notions of power and self-righteousness, Williams proposes we view forgiving others as sharing “in the helplessness of God”:

We should rather think of those extraordinary words in the prophesy of Hosea (11:8–9) about the mercy of God: ‘How can I give you up, Ephraim? . . . for I am God and not a mortal.’ To forgive is to share in the helplessness of God, who cannot turn from God’s own nature: not to forgive would be for God a wound to the divine life itself. Not power, but the powerlessness of God whose nature is love is what is shown in the act of forgiving. The disciple rooted in Christ shares in that powerlessness, and the deeper the roots go, the less possible it is not to forgive. (42)

According to this paragraph, God appears somehow enslaved to his own nature, powerless to resist the impulse to forgive sinners. A robust doctrine of salvation guards us from making such disastrous statements about God’s nature. At the cross, the perfect harmony of all God’s attributes—grace, mercy, holiness, justice, love—is maintained seamlessly as he sacrifices his own Son in the place of unworthy rebels so they might be forgiven (Rom. 3:21–26). Helpless? No. “Our God is in the heavens; he does all that he pleases” (Ps. 115:3).

Without the doctrinal contours of Christ and his cross-work, our thinking about Christian discipleship becomes muddled and easily turns inward.

Indeed, much of what I found in Being Christian and Being Disciples relates to the inward motions of the soul without balanced attention to objective biblical truth. Given this lack of attention to Scripture, I walked away from these books without conviction of what’s true and, therefore, without enduring motivation to walk in new patterns of discipleship.

To Williams, discipleship is about being “open to Christ and Christ’s Spirit” (Being Disciples, vii), of cultivating a mind that is “sufficiently free of the preoccupations of the ego” (16), and “learning stillness, attentiveness, expectancy” (17). Regarding stillness, he comments:

Self-awareness and stillness are very much connected to each other, because as we still ourselves we become more likely to be able to hear God speaking our name in that mysterious moment when we connect with the act and word of God that has brought us into being and, much more important, is bringing us into being moment by moment. . . . And somehow, in our stillness, we are seeking to connect with that moment of creation, the eternal reality of God speaking, God giving, God calling us into life. (Being Disciples, 82–83)

I must confess I don’t know what Williams is getting at here. These sentiments may warm the heart, but only until you start asking clarifying questions. Overall, both books consist chiefly of vague spiritual musings, not the sharp and profound insight one derives from close attention to biblical texts.

That Williams’s works on discipleship draw loosely from Scripture isn’t entirely surprising, however. His doctrine of revelation largely undermines the possibility of theological certainty (see Williams, Open to Judgment and On Christian Theology), and his chapter on the Bible (Being Christian, 21–40) lets the reader know he isn’t coming an inerrantist perspective. Though quoted at the beginning of each chapter, Scripture doesn’t carry much weight in either book.

As a test case, these books serve as an example of what happens when we attempt to build a vision for Christian discipleship on foundations other than Reformed theology, particularly a Reformed understanding of the gospel and a full-bodied doctrine of Scripture.