I sometimes wonder how many sermons on the birth of Christ we evangelicals would hear if we didn’t celebrate Christmas yearly. If the number of sermons we hear on the ascension of Christ is any indicator, the answer is “Fewer than one per year.”

The ascension is a “neglected doctrine,” according to the subtitle of Patrick Schreiner’s book The Ascension of Christ: Recovering a Neglected Doctrine. Schreiner, associate professor of New Testament and biblical theology at Midwestern Baptist Theological Seminary, begins by examining five reasons we overlook the ascension (e.g., “It seems like a bad plan,” 3), followed by five reasons why we shouldn’t (e.g., “the New Testament assumes its central place,” 11). He ends with a brief chapter connecting the ascension to other areas of theology (100–16).

But the heart of the book consists of Schreiner’s effort to explain how Christ’s ascension relates to his threefold office of prophet, priest, and king. This is the book’s unique contribution. The ascension “not only authorizes and endorses Jesus’ work, but continues Christ’s three roles,” Schreiner writes. “The ascent culminates Christ’s earthly work and marks a shift in Christ’s function as prophet, priest, and king” (xvi). 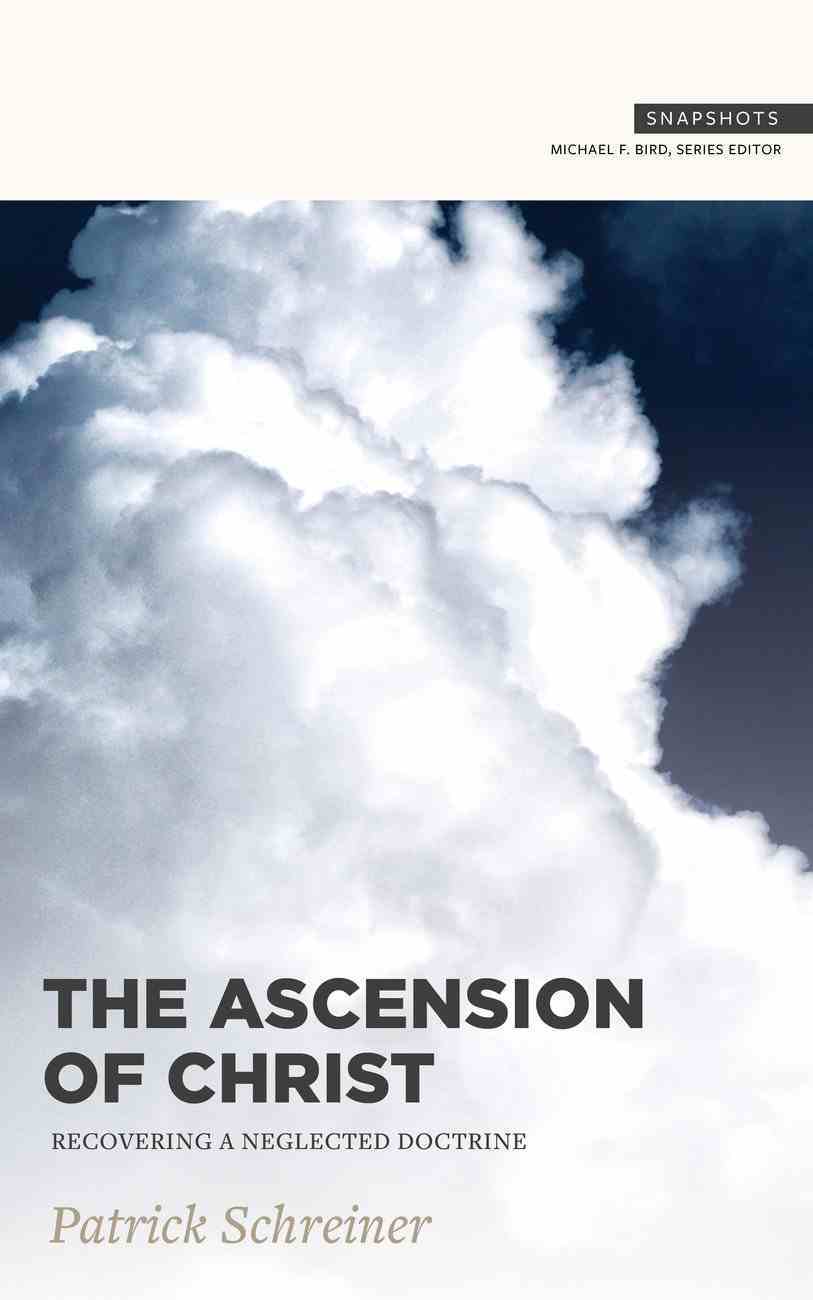 In The Ascension of Christ, Patrick Schreiner argues that Jesus’ work would be incomplete without his ascent to God’s right hand. Not only a key moment in the gospel story, Jesus’ ascension was necessary for his present ministry in and through the church. Schreiner argues that Jesus’ residence in heaven marks a turning point in his three-fold offices of prophet, priest, and king. As prophet, Jesus builds the church and its witness. As priest, he intercedes before the Father. As king, he rules over all.

A full appreciation of the ascension is essential for understanding the Bible, Christian doctrine, and Christ’s ongoing work in the world.

To see how, let’s examine the threefold backbone of Schreiner’s argument.

Ascension of the Prophet

Christ clearly acted as a prophet during his earthly ministry (21–22; Luke 7:16). Like every prophet before him, he was filled with God’s Spirit and proclaimed God’s word (23–24), and like many prophets before him, he performed signs and wonders (24). In this vein, each of the core chapters also contains a helpful discussion of “shadow stories” from the Old Testament that provide a typological preview of prophets, priests, and kings “ascending” (think of Elijah; 25, 52, 82).

So how does the ascension mark a shift in Christ’s role as our prophet?

In one sense, it marks the end of Christ’s prophetic work on earth. Because of the ascension, Jesus is no longer here, humanly speaking—he’s in heaven (43). And yet in another sense the ascension only thrusts his prophetic ministry “into a higher gear” (21). Jesus was right—it really was to our advantage for him to leave us (John 16:7). By ascending into heaven, Jesus shifted his role from the Prophet who was filled with the Spirit without measure to the Prophet who gives the Holy Spirit to all believers without distinction (Matt. 3:11; John 16:7; Acts 2:17–18, 33).

The ascension only thrusts Jesus’s prophetic ministry ‘into a higher gear.’

The ascension extends his prophetic ministry beyond anything he could’ve achieved by staying on earth, where he would’ve been humanly limited to one place at a time (31). Now, despite his physical absence, he dwells in us by his Spirit, enabling us to do even greater works than he did (37; John 14:12).

Jesus has made us prophets, as well as priests and kings. Does this mean the church today should continue to perform signs and wonders? Schreiner doesn’t take a hard stance on this question (42). But he clearly affirms that the church continues “Christ’s prophetic work by acting as ambassadors of the good news,” and that “this proclamation of the good news is described as prophecy” (42).

Ascension of the Priest

While Bobby Jamieson argues that Christ didn’t strictly serve as a priest until his ascension into heaven (at least in Hebrews), Schreiner affirms that Jesus also functioned as a priest while on earth. Like the Levitical priests, he began his ministry at age 30 with a water-washing ritual (47–48). Like the Levitical priests, he was chosen by God to offer a sacrifice on behalf of God’s people—though his was infinitely better (49).

So how does the ascension mark a shift in Christ’s role as our priest?

Jesus was designated and acted as priest on earth, but installed as the priest in heaven.

Answer: “Jesus was designated and acted as priest on earth, but installed as the priest in heaven” (47). Just as the high priest entered into the Holy of Holies once a year to offer the blood of the sacrifice, Jesus also entered into the true Holy of Holies once for all when he ascended (Heb. 9:6–12). He doesn’t, Schreiner writes, “sacrifice himself again in heaven; rather, he presents the blood already sacrificed. . . . In this manner, the ascension does not move past the cross but puts the cross ever before our eyes” (63–64).

But not only does his ascension involve the priestly presentation of his once-for-all sacrifice, it also involves his priestly intercession on our behalf (Rom. 8:34; Heb. 7:25). “Even in his sitting he continues to serve” (65). As our heavenly high priest, he prays for us, bestows the Spirit on us, and invites us to the throne of grace.

And in doing so, he has made us a royal priesthood (1 Pet. 2:5). The church is now God’s priesthood on earth, offering spiritual sacrifices, interceding for sinners, and telling people how they can draw near to God (70–72). We have “a high priest who has passed through the heavens” (Heb. 4:14), and we are his priests on earth.

Ascension of the King

So how does the ascension mark a shift in Christ’s role as our king?

Answer: “Christ existed a king on the earth, but not until he went to the Father was Christ installed and exalted the king of the universe” (89). The ascension was his enthronement—when he appeared before the Ancient of Days, received all dominion and authority, and sat down at God’s right hand (75, 95). Schreiner argues that of the three offices, kingship “stands at the pinnacle,” and the others flow from it (76).

The resurrection and ascension are distinct but inseparable movements in Christ’s exaltation to the throne. Without the ascension, his kingship wouldn’t be complete, any more than a man could continue as king without a coronation (90). Christ conquered his demonic enemies on the cross (Col. 2:14–15), but it was in the ascension that he was exalted far above them (Eph. 1:20–21).

Without the ascension, Jesus’s kingship wouldn’t be complete.

But it was also in the ascension that Jesus became head over all things for the church (Eph. 1:22), and in doing so he’s made us his “royal family” (96).

Schreiner is careful to stress that our being royalty doesn’t entitle us to a cushy life—indeed, Scripture explicitly says we must suffer with Christ if we wish to reign with him (Rom. 8:17; 2 Tim. 2:12; 3:12). Our royal pattern follows that of our ascended King, who suffered before entering glory (Luke 24:26; 1 Pet. 1:11). But even as we wait for his return, we wait as royal heirs and soldiers assured of victory (97).

Putting the Ascension in Its Place

Patrick Schreiner sets out to give Christ’s ascent “better narrative and theological positioning” (xv). It’s a doctrine for which we often lack a proper place. We don’t know where it fits.

Schreiner has done us a great service. In fewer than 120 pages, he has given us a warm, worshipful, well-documented account of where the ascension fits and why it matters. To tweak a famous line from the Roman poet Terence, “I am a Christian—nothing about Christ is alien to me.” If we thought something so central to Jesus’s life was irrelevant to us, Schreiner has shown us how mistaken we were.