After re-reading Neil Postman’s Amusing Ourselves to Death: Public Discourse in the Age of Show Business recently, I thought about taking a 24-hour fast from media. No TV, no radio, no smartphone, no laptop—for a whole day. Then I remembered it was winter here in Chicago and weather forecasts are a prerequisite for citizenship. And I was expecting important emails about my vaccine. And what about those text messages from family that I’d miss?

And I realized that while I think I control my technology, maybe it controls me as much as the next guy. 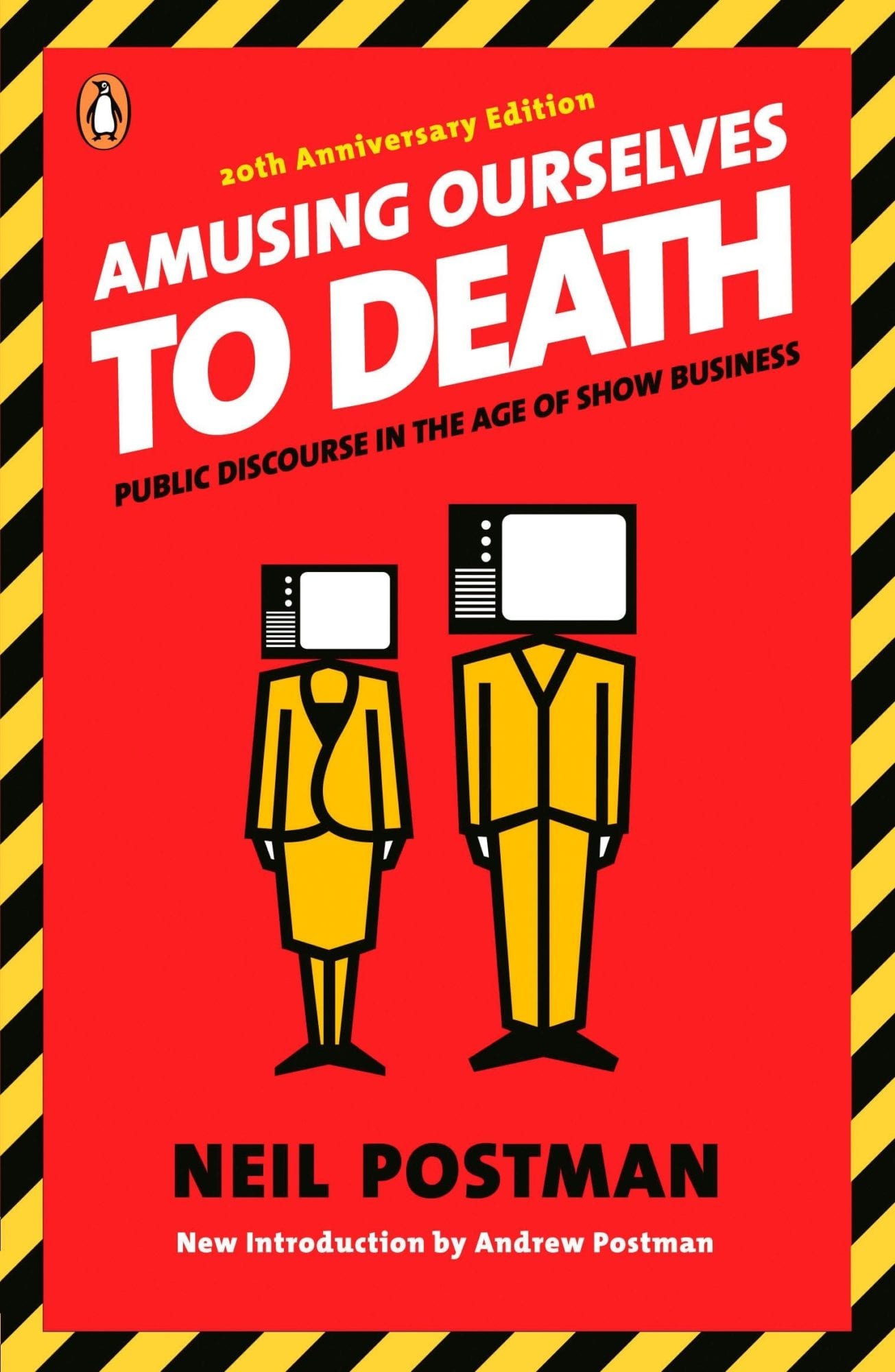 Amusing Ourselves to Death: Public Discourse in the Age of Show Business

Amusing Ourselves to Death: Public Discourse in the Age of Show Business

What happens when media and politics become forms of entertainment? As our world begins to look more and more like Orwell’s 1984, Neil’s Postman’s essential guide to the modern media is more relevant than ever.

Originally published in 1985, Neil Postman’s groundbreaking polemic about the corrosive effects of television on our politics and public discourse has been hailed as a twenty-first-century book published in the twentieth century. Now, with television joined by more sophisticated electronic media—from the Internet to cell phones to DVDs—it has taken on even greater significance. Amusing Ourselves to Death is a prophetic look at what happens when politics, journalism, education, and even religion become subject to the demands of  entertainment. It is also a blueprint for regaining control of our media, so that they can serve our highest goals.

Advent of the Entertainment Culture

When Postman’s classic lament for the loss of our print culture was written in 1985, the Big Three networks dominated. Pac-Man was five years old. USA Today was three. The Mac computer was one. Cable TV was in its infancy. Google was 12 years into the future. Netflix wouldn’t open for business for 14 years. We’d have to wait 22 years for the iPhone and Kindle. Though television is not the force it once was, his critique remains as potent as ever.

In Colonial America, before the advent of the entertainment culture, life was different. Reading, Postman tells us, was “not an elitist activity, and printed matter was spread evenly among all kinds of people”—except, of course, for slaves. People were so busy reading newspapers and pamphlets they hardly had time for books. But books also got their share of attention. Common Sense by Thomas Paine, for example, would have sold the equivalent of 33 million copies in today’s America. More than that, libraries and lecture halls multiplied.

Why were farmers and merchants able to follow the involved arguments and elaborate sentences of Lincoln and Douglas (who spoke for three and four hours at a time per debater)? Because the audience was imbued with a print culture. Even the way Americans talked betrayed this. Tocqueville wrote, “An American cannot converse, but he can discuss. . . . He speaks to you as if he was addressing a meeting.” Why? Their minds and speech were shaped by print.

In contrast, our civic life has become consumed by soundbites and Twitter feeds. Even those outlets that are supposed to be providing substance do not. Despite appearances, Fox News and MSNBC have much in common. Neither is primarily concerned with informing the public. Both are in the entertainment business. Both are primarily concerned with getting as many people to watch as possible so they can make as much money as possible—and that is done through entertainment. Want proof? Just look at the Nielsen Ratings for both of them compared to C-SPAN.

Our civic life has become consumed by soundbites and Twitter feeds.

You don’t have to be Marshall McLuhan to recognize how far public discourse has declined even from 35 years ago. Presidential debates are unwatchable as candidates talk over each other. Politicians seem more like stand-up comedians, roaming the stage with handheld mics and giving cynical one-liners rather than offering vision or well-considered policy proposals. When did you last hear a candidate seek to thoughtfully persuade a broad range of listeners rather than merely rally the base by insulting opponents and offering half-truths?

This is the core of Postman’s distress. The loss of a print culture didn’t grieve him most. It was the demise of public discourse.

We’ve ceased to be a deliberative culture, having become obsessed with minutiae and irrelevancies instead. Postman traces the origins of this back to the mid-19th century and the introduction of the telegraph. Now, news can come instantly from all over the world to populate the pages of newspapers. A royal marriage in Japan, the death of an opera star in Brazil, a financial scandal in England, a famine in Turkey.

What could be the harm of this? “The contribution of the telegraph to public discourse,” Postman wrote, “was to dignify irrelevance and amplify impotence.” What difference would any of these make in the daily life of average readers? And what could one do about any of these anyway?

The loss of a print culture didn’t grieve Postman most. It was the demise of public discourse.

Even more troubling, the telegraph presented these isolated factoids without context, without analysis, without perspective. It “made public discourse essentially incoherent.” Now multiply the telegraph by Twitter. That is the essence of our entertainment news culture.

Today, I think, Postman would go further. We have also lost the ability to persuade. Persuasion has a bad name because of its associations with manipulation. And our relativistic culture has made persuasion impolite at best. After all, everyone deserves to have an opinion unsullied by logic or fact or experience.

Even those who love books have difficulty (OK, I have difficulty) talking to people I disagree with in an honest, civil, reasoned manner. I find it challenging to give a fair statement of, and the strongest reasons supporting, perspectives I oppose. Somehow I gravitate to straw men and lean all too heavily on the one-liner.

How can we combat our entertainment society and the loss of a deliberative culture? Even Postman struggled to come up with constructive and realistic options, leaving a gap in an otherwise stellar work. If nothing else, this reveals the immensity of the problem. In the intervening years I have yet to see feasible proposals from anyone for fixing these systemic issues.

On a personal level, I stopped following the news about 12 years ago. Rather than being informed by magazines, newspapers, the radio, television, cable, or the web, I was mostly agitated by them. Instead, I read books and longform journalism. I find this much better for my mind and my soul than disjointed news items or emotion-laden postures. Books, as Postman notes, “are an excellent container for the accumulation, quiet scrutiny and organized analysis of information and ideas. It takes time to write a book, and to read one; time to discuss its contents and to make judgments about their merit.”

Reading history is a far superior route to the news for understanding our day. Extremely valuable also are books like Just Mercy by Bryan Stevenson, Factfulness by Hans Rosling, or Hillbilly Elegy by J. D. Vance. Though they largely consider just the last 40 years, they offer the long view by today’s standards, providing thoughtful perspective and analysis.

Reading history is a far superior route to the news for understanding our day.

Another step I’ve taken is to read those I disagree with. I admit, I seldom venture into books that are far more conservative or liberal than I am. What I have found helpful, however, is to read those who are somewhat more to the right or a bit more left. This helps me to be less doctrinaire, more fair-minded, and perhaps more humble. It reminds me that I don’t know everything and am not always right.

Yes, I still enjoy movies and TV series. But, thanks to Postman, I don’t get my entertainment from the news.

Andrew Le Peau is a writer and editor living in the Chicago area. He was the longtime associate publisher for editorial at InterVarsity Press, where he worked for more than 40 years. He is the coauthor of several Bible study guides, including James and Ephesians in the LifeGuide Bible Study series, and author of Heart. Soul. Mind. Strength. and Mark Through Old Testament Eyes.