Adam, the Fall and Original Sin: Theological, Biblical, and Scientific Perspectives is a brave book. Few subjects in biblical theology have been so controversial in recent decades—for a combination of biblical, scientific, theological, and apologetic reasons—as Adam, Eve, and the fall. So Hans Madueme (assistant professor of theological studies at Covenant College in Lookout Mountain, Georgia) and Michael Reeves (theologian-at-large at Wales Evangelical School of Theology), along with a well-respected team of evangelical scholars spanning several disciplines, have put their heads together and delivered a wide-ranging volume that aims to tackle the tough questions head on. The result is a robust restatement of the historicity of Adam, the reality of the fall, and the fact of original sin.

I use that word restatement deliberately. If readers are looking for a book that brings together exegetes, church historians, and biblical theologians to reiterate a cherished doctrine, in a way that traces Adam and the fall through both the Scriptures and the history of the church, they need look no further. However, if they are looking for direct engagement with the biggest challenges to these doctrines as traditionally understood, through sustained interaction with the opposing arguments in their strongest forms, they may be disappointed; such a book is no doubt needed, but (at least for me) this is not it. As such, it is likely that many will welcome the volume as a valuable contribution to the discussion, whereas others will see it as a missed opportunity.

The book is well structured in four clear parts, and is relatively easy to summarize. After a helpful, scene-setting introduction from the editors, Part One focuses on Adam in the Bible and science, with essays on Adam in the Old Testament (John Collins), Adam in the New Testament (Robert Yarbrough), and Adam and modern science (written under the pseudonym of William Stone). Part Two traces the doctrine of original sin historically, looking at patristic (Peter Sanlon), Lutheran (Robert Kolb), Reformed (Donald Macleod), Wesleyan (Thomas McCall), and modern (Carl Trueman) theology. Part Three, “Original Sin in Theology,” looks at original sin from the perspectives of biblical theology (James Hamilton), systematic theology (Michael Reeves and Hans Madueme), science (Hans Madueme), and pastoral theology (Daniel Doriani). And Part Four looks at Adam and the fall in dispute, with chapters on Romans 5:12–19 (Tom Schreiner), the fall and Genesis 3 (Noel Weeks), and finally theodicy (William Edgar). The editors conclude with a brief postscript. 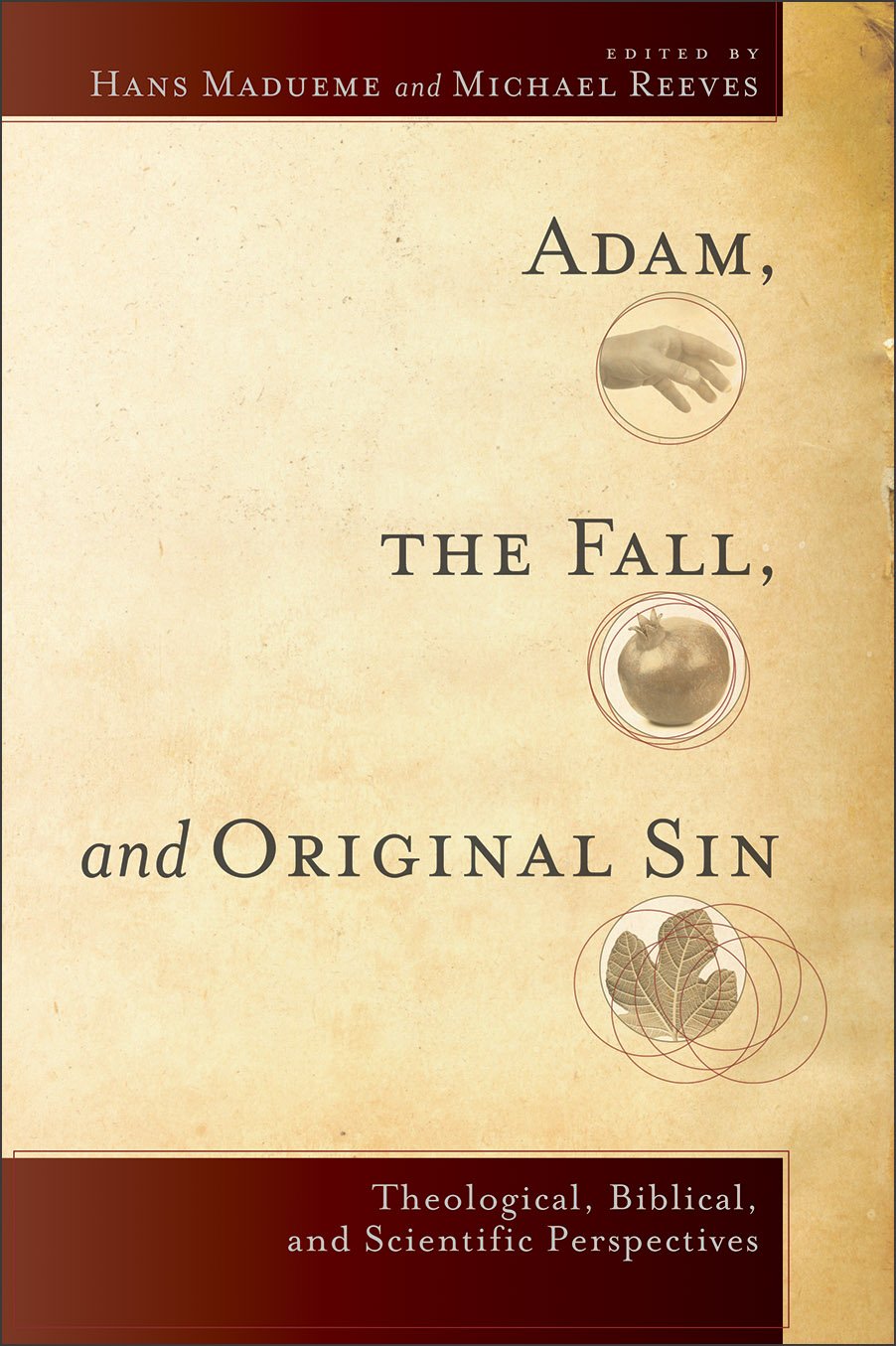 There is much to commend. Collins, who has published widely on this subject, navigates a sensible middle course between undue literalism when it comes to Genesis 1–5 and abandoning the historical core of the narrative, concluding that the author was using figurative and literary techniques to describe what he viewed as essentially historical events. Hamilton, in arguably the book’s outstanding chapter, engages with the arguments of Peter Enns and others, showing that while Adam is rarely mentioned in the Old Testament, the shape of the relevant narratives assigns a key place to his existence and fall into sin. Schreiner’s exposition of Romans 5:12–19, though familiar to those who have read his commentary on Romans, is an exegetical tour de force, whether or not one finally agrees with his conclusions. As such, the book mounts an effective defense of the idea that the writers of Scripture, and the church through most of history, believed in a historical Adam, a historical fall, and original sin.

Yet the book falls short, for me at least, in two crucial respects. The first is that the insights of the various chapters are not integrated together, and in some cases seem to be pulling in opposite directions. The most obvious example is that “William Stone,” writing the book’s main scientific chapter under a pseudonym for professional reasons (which is a shame, if an understandable one), concludes that the paleo-anthropological data puts Adam, if historical, at the root of the genus Homo roughly 1.8 million years ago (80). This, to put it no more strongly, is hard to square with Yarbrough’s observation that Jude saw Enoch as “seventh from Adam” (35), or Madueme’s objection to changing the date of Adam according to the latest paleontological evidence (237).

Multi-author volumes always run a risk of minor disagreements between contributors, of course. But this one strikes at the heart of the project: the introduction notes that the interface between the natural sciences and Scripture on Adam is central to the volume (x–xii), and subsequent essays refer back to the scientific evidence as having been treated in the first three chapters (e.g., 210). Yet the load-bearing scientific chapter supports a model that, as far as I can tell, is utterly incompatible with those assumed by several of the other contributors, especially those who emphasize the original intent of the biblical authors. If, as seems to be the case, the scientist regards the biblical scholars’ models as scientifically untenable (since the fossil record doesn’t support them), and the biblical scholars regard the scientist’s model as biblically untenable (since the original authors didn’t intend to communicate that Adam lived 72,000 generations before bronze, iron, pipes, and the flood), then we still have more or less the same problem the book was written to resolve.

The second problem is that the major alternative viewpoints don’t appear to have been treated in their strongest form. The primary scientific objections to a single human pair as the only progenitors of the entire human race are not merely (or even primarily) paleo-anthropological, but genetic—as per the arguments of evangelical evolutionists like Francis Collins, Denis Alexander, and company—and this is all but ignored in the volume. Several times the fossil record is spoken of as the “smoking gun” that apparently proves the common lineage of humans and apes, and addressed accordingly, even though many leading theistic evolutionists regard it as, at best, secondary confirmation of something otherwise proved beyond reasonable doubt by the genetic evidence. An unwary reader could easily conclude the only reason to object to the traditional interpretation is the fossils, and that this has been adequately addressed. This is not in fact the case.

Meanwhile, the syntheses of evangelical heavyweights like Derek Kidner, John Stott, J. I. Packer, Denis Alexander, Tom Wright, and Tim Keller—each of whom affirms a historical Adam in some way while seeking to integrate biblical interpretation with the scientific (including genetic) evidence—are summarily dismissed in two paragraphs of Hans Madueme’s chapter (217). They are rejected on two grounds: first, because the original author gives no indication of other humans being alive during the fall story, especially with his reference to the man being “alone” (which is true, but then the author gives no indication of Adam being alive 1.8 million years ago either); and second, because biological descent is required for an ontological basis for Adam’s headship (which may or may not be true, but since it isn’t true of Christ’s headship, let alone the relationship of Gentiles to Abraham or the entire wilderness generation to Moses, it has to be argued for in detail rather than asserted). As such, more engagement with the best forms of alternative arguments would have significantly strengthened the book.

Having said all that, there is much to appreciate in Adam, the Fall, and Original Sin. Perhaps, as with any tome of this size, readers simply need to consider what they are hoping for. If it is a detailed response to the strongest alternative proposals, complete with a scientifically and theologically coherent synthesis, then they should probably look elsewhere. But if it is a historically and exegetically grounded defense of the historicity of Adam and the fall, with some solid chapters and some occasionally sparkling exegesis, they will be well served.