Today I am interviewing Dr. Melani McAlister, professor of American studies and international affairs at George Washington University. She is the author most recently of The Kingdom of God Has No Borders: A Global History of American Evangelicals (Oxford, 2018).

[TK] Why do you take a global approach to American evangelicals? How does the conventional storyline about evangelicals change when you do this?

[MM] The fundamental premise of the book is that, when international issues are taken into account, the history of modern evangelicalism looks different: It is more complex, more racially diverse, and more politically ambidextrous. The Kingdom of God Has No Borders explores how American evangelicals have engaged the world beyond U.S. shores over the past 60 years, particularly in the Middle East and Africa.

We are accustomed to hearing about the rise of the Religious Right in the 1970s and 1980s, its ebbs and flows in the subsequent decades, and of course the history of white evangelical support for Donald Trump in the last election. This book isn’t in opposition to that history, but it does complicate it.

So, the storyline changes, not because U.S. evangelicals become uniformly more liberal or more conservative as a result of their transnational investments and encounters, but because their self-definitions begin to shift. It’s not that everybody in the pews is now a “global Christian,” but there is an awareness about the rest of the world that, before the 1960s, was mediated almost entirely through missionary work. Now we have to ask how African evangelicals have encouraged Americans and others to think about debt relief and global poverty as a systemic issue, or how Palestinians or Iraqis have raised awareness of their political struggles. And we see how the generally conservative politics around gender and sexuality in Africa and Asia have influenced the global evangelical universe. 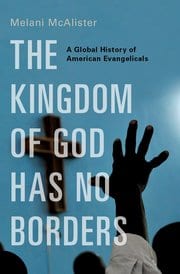 You write that American evangelicals over the past half-century have typically taken “two distinct (but linked) postures toward the rest of the world.” These are “enchanted internationalism” and “victim identification.” What are these postures, and why have they resonated for evangelicals?

Yes, this is really a key argument of the book. I describe the first of the two stances, enchanted internationalism, as a longing for emotionally powerful forms of religious experience that American evangelicals have often identified with the global South. American evangelicals have often operated with the assumption that much worship in the modern West is stale and dry. As U.S. evangelicals looked beyond their borders after 1960, toward Africa, Latin America, and Asia, they often envisioned people in those regions as living embodiments of authenticity, passion, and zeal. In the charismatic worship styles of the global South—with their stories of miracles and faith healings—American evangelicals saw an exemplary “enchanted” faith, practiced by believers who were more intensely committed and perhaps more ideally Christian than most Europeans and Americans. This means that they are looking to their international connections with a kind of respect and a sense of brotherhood, on the one hand, but with a kind of primitivism on the other.

The second orientation is what I describe as “victim identification.” This points to the role of sanctified suffering. That is, evangelicals have talked about, and given money to, people they see as victims—maybe victims of famine or poverty or government oppression. Much of this victim identification was connected to Cold War anti-communism. But it was also built on some of the best forms of social justice concern and activism, as when people fought for the hungry or (in some cases) the victims of South African apartheid.

But in the last few decades, the most characteristic focus has been on victims of religious persecution by Muslims. That is, looking at Egypt or Nigeria or Iraq, evangelicals in the United States and Europe see tension and violence, and they identify those Christians not just as victims but as brothers and sisters in Christ. And they see Muslims as persecutors.

The focus on victims has a number of effects, but it’s particularly striking that some American Christians, particularly white American evangelicals, perceive themselves as part of an oppressed or marginalized group. In 2017, 57 percent of white U.S. evangelicals told pollsters that they believe American Christians face a great deal of discrimination, while only 44 percent said the same was true of Muslims.

You point to the Lausanne Congress on World Evangelization in 1974 as a “singular moment in postwar evangelicalism” and even call it “The Battle of Lausanne.” Why was Lausanne such a fraught meeting for evangelicals, and what were its most important outcomes?

The chapter on Lausanne is one of my favorites, probably because what I learned about Lausanne was so transformative for my thinking about evangelicals. As many of your readers know, The Lausanne Congress on World Evangelization in 1974 was the largest global gathering of evangelical Christians in the latter half of the 20th century. Lausanne was also signiﬁcant because of the struggle between two sets of evangelical leaders: those led by well-known Americans (including Billy Graham) who wanted to retain a focus on evangelism, and the young radicals, led by Latin Americans (but joined by African Americans, some Africans, a few Europeans and others) who demanded broader attention to social concern.

One of the most striking things about that meeting in 1974 was how ascendant the evangelical social concern faction seemed at the time. I write about the lecture by theologian René Padilla, who electrified the Congress when he insisted that it was time for evangelicals to start taking racism, materialism, and oppression seriously as issues of sin.

Yet within a few years a lot of the radical impulse of Lausanne had been marginalized. There were many Lausanne Occasional Papers on every topic from how to live more simply to how to respond to racism, but the Lausanne Movement itself soon made evangelism its first priority, taken over by the energies of the Unreached Peoples movement.

The “10/40 Window” became arguably the most pervasive missionary concept of the late 20th century, and it also drew a lot of criticism, not least from missionaries themselves. Remind us what the 10/40 Window is, and tell us why it became so popular.

The 10/40 Window is that area of the world between 10 and 40 degrees north of the equator, a belt that included India, Pakistan, China, the Middle East, and parts of Africa—that people described as desperately needing Jesus. Argentine evangelist Luis Bush introduced the 10/40 Window on the opening night of the second International Congress on World Evangelization in 1989. This was the second “Lausanne” meeting, this time held in Manila. Standing before 3,600 evangelicals from 173 countries, Bush defined post-Cold War evangelical geography. He called on his fellow believers to focus on evangelizing the “least evangelized” part of the world. The “Muslim block, the Hindu block, the Buddhist block” dominated the 10/40 Window. Now was the time to “redeploy our missionaries” to concentrate on this vast area of “unreached peoples,” especially those living in “Muslim contexts in the Third World.” Since the 1979 Iranian revolution, “political Islam” had been a subject of increasing discussion in the secular news media. Now it was also a target for evangelicals, who promised to reach into its heart.

The images of the Window were soon everywhere—from coffee mugs to mouse pads to calendars. I think the idea of the Window was so popular because it built on earlier ideas about “frontier missions,” complete with National Geographic-style images of people who needed to receive the gospel. And it played a role in making sense out of the world at the end of the Cold War. It also played into contemporary anxieties about Islam.

There is no question that the 10/40 Window had a tendency to sweep away virtually everything else, ignoring other forms of service and discipleship, such as building clinics, supporting churches, or training pastors. And, of course, it marginalized anything that happened outside that powerful, narrow geographic band.

It seems that one main theme of the book is that post-World War II American evangelicals have engaged the world in problematic and simplistic ways, even if their intentions were often good. For example, the short-term missions movement has been dogged by criticisms that it does not address systemic needs overseas, and that it amounts to spiritual tourism. What do you want evangelical leaders to take away from your history of their global engagement?

This is a great question. I want to say first what I hoped non-evangelical readers to get from the book: I wanted them to see that evangelical life and culture has been more complicated, more self-critical, more racially and politically diverse, and definitely more global than most previous histories have accounted for. I guess I want evangelicals to see this too. I want younger evangelicals and evangelicals of color to see a history of anti-racism, social concern, and political contestation.

But, as you say, I did not intend this to in any way let evangelicals off the hook for what I see as problematic behaviors and impacts. There is a history of neo-imperial attitudes, simplistic solutions, oppressive presumption, and anti-Muslim sentiment that can reside in the heart of good intentions. In fact, good intentions sometimes can keep us from seeing these problems. I think this is true for many secular people as well. Americans of all stripes like to believe in our own benevolence. Our good hearts are not enough to ensure that we are doing the right thing. Accurate history can help us get a better perspective on the complex history of American Christians in the world.

Tradition, the Bible, and America’s Debate over Slavery