Many church planters and revitalizers go into their work aware it may not succeed. The plant may dissolve; the church could split; the renewal of a longstanding congregation may never materialize. There’s no seminary class on such outcomes, but these are common experiences in a world where Satan fights for every inch of territory Christ’s people seek to claim.

But what happens when, in God’s sheer grace, the work—humble, simple, and biblical—takes off? What does revitalization look like in a rural context, without humongous giving, led by a young pastor?

Brandon Dyer is the senior pastor of Windsor Christian Fellowship (WCF) in Windsor, Maine, and he is well-placed to answer these questions. When he posted the need for a rebuilt sanctuary on Giving Tuesday, his GoFundMe page caught my eye. Here, in just a few photos, was a story of health, then loss, then health again, all in an out-of-the-way area without a single “Top 100 Fastest-Growing Church.”

I’m from Maine, so when I saw Dyer’s request, I clicked the link. After engaging Dyer with some questions about the church, I realized I was seeing a reversal of the narrative so common in New England (and across America and the Western world). His church began 200 years ago as an American Baptist congregation. Over the years it had a solid ministry to Kennebec County (population roughly 120,000), but as of a few decades ago it had fallen on hard times, both spiritually and financially. By the time Dyer came, attendance was in the 20s on Sundays—about the size of the Bible-believing Baptist church I grew up in just a few hours away (with many other evangelical assemblies in this range as well).

Three years ago, Dyer arrived from Rhode Island as part of a North American Mission Board (NAMB) replant team. He resolved to preach the Word and reimagine the congregation through a biblical framework. Looking back, he says:

We have seen beautiful things happen as a result of preaching the Word. Starting out as a church replant three years ago, we determined to examine our church in light of the Scriptures and make any changes accordingly. To give an example, one of the areas where change was needed was the polity of the church. After preaching and teaching concerning the need for a plurality of elders overseeing the spiritual needs of the church and the need for deacons to oversee the physical needs of the church, our congregation affirmed the biblical position. As far as I know, our almost 200-year-old church now has a plurality of elders for the first time. 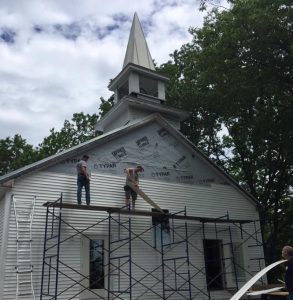 Biblical preaching went hand-in-hand with biblical polity at WCF. Said differently, the preaching of the Word created a living enfleshment of the Word: scriptural exposition to shape the flock, elders to lead the flock, deacons to care for the flock. Dyer’s focus was on the harvest of faith and faithful living that exposition creates:

It has been a joy to see our people come to a clearer understanding of the gospel, follow the Lord in baptism, come to an understanding of several books of the Bible, and grapple with difficult subjects the Bible addresses—not just corporately but individually. The Lord is continually teaching us how important a Word-centered ministry is and how dependent we are on the Word of God to do the work of God in and for the people of God.

In late 2017, just a few years after a low point in its history, WCF has more than 75 people attending on Sundays. Even with a steady diet of hymns and a studied lack of enticing allurements, young people have been drawn to the church, with most of the recent numerical growth coming from people between the ages of 20 and 40. Turns out even hardened New Englanders want the thick stuff (the good stuff): doctrine, gospel, God.

But the story doesn’t stop there. To put it provocatively, biblical growth is creating problems for the gifted young pastor and his flock. Not bad problems, mind you—good problems. God is moving in central Maine, and this means things are changing.

The preaching of the Word created a living enfleshment of the Word: scriptural exposition to shape the flock, elders to lead the flock, deacons to care for the flock. Dyer’s focus was on the harvest of faith and faithful living that exposition creates.

For more than 10 years, the church has met in the fellowship hall instead of the sanctuary. The tiny size of the congregation not only encouraged such a move, but even necessitated it. Think about the psychic significance of such a shift. Instead of meeting in the main building, the people moved over to the auxiliary space. The symbolism is as palpable as it is painful. Funds for a remodel dwindled; the physical condition of the building mirrored the spiritual condition of the body. Here was yet another New England assembly, ebbing to nothing, the place literally falling apart. It’s difficult to calculate the effect of this long, slow undoing on the members of God’s household.

But all this has changed. Now, the church’s spiritual condition demands a rethinking of its physical state. Dyer is leading a drive to raise $9,000 by May 31, 2018. If the church hits that mark, it receives $8,000 in funds. All this money will go toward the physical renovation of the building. Such endeavors aren’t cheap, as many pastors know well; the price tag for much-needed chairs is itself about $10,000! But as Dyer will tell you, these are good problems to have, good challenges, conditions sparked by a small congregation in Maine that by God’s mercy is growing once more. 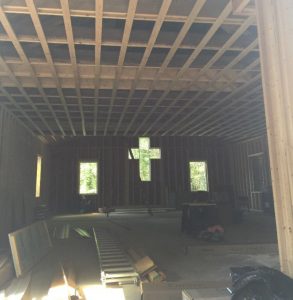 A few weeks before I came across Dyer’s post, I saw several eloquent—and frustrated—tweets by Presbyterian pastor Duke Kwon. He tweeted a photo of a beautiful edifice in Washington, D.C.: “This is our church building. Soon it’ll be a luxury condominium development. Today, I’m mad about it.” He elaborated on this initial post, pointing out that “physical ‘sanctuaries’—public outposts of the kingdom in a city’s or neighborhood’s commons—are going extinct.” He cited this statistic: “From 2010–15, church sales in the U.S. increased by 100% and church redevelopment projects tripled.” Kwon’s heartfelt tweets drew a strong response on social media and connected with many planters and revitalizers facing similar circumstances.

The work in Windsor isn’t earth-shattering at this point, especially by the scale some would use. But it is miraculous.

Some might argue that buildings don’t matter, that the early church met in houses, and that we shouldn’t invest in structures, but causes. It’s true, of course, that no congregation has to have a building in which to meet, serve, and worship the Lord. But buildings function as gathering points for the church, and they allow the leadership to focus on the spiritual health of the body, not the chairs that need unfolding (and refolding). This stability aids the membership in untold ways, just as it helps a family to be rooted, not moving ceaselessly from one location to another.

Dyer’s post reminded of the powerful symbolism a building possesses. A small but steadily growing flock, repairing the walls; a people struggling against the winter of secularism, giving sacrificially; a young pastor leading the church not out of the sanctuary, out of the harvest time, but into it. What was Ichabod now seems Immanuel. The glory had departed, and now the Lord and his Spirit are among the flock once more.

Our God is a God of unlimited grace and stunning reversals. Summarizing what has happened in Windsor (and elsewhere in the region), Dyer reminded me:

Driving through New England can be deceiving in regard to the spiritual landscape. The quintessential New England church buildings that dot the landscape seem to give evidence of spiritual vitality; however, these buildings are often mere shells holding congregations that have either long gone liberal or are dying out.

In one such quaint structure, though, there is a new trajectory:

Our church’s attendance on Sunday morning has tripled; folks are consistently stepping forward for membership; we’ve seen the spiritually dead come to life; we have seen baptisms each year; the congregation is growing in service; and we believe God is only just beginning his work in our little town of Windsor, Maine.

The work in Windsor isn’t earth-shattering at this point, especially by the scale some would use. But it is miraculous. All true church growth, spiritual and physical, tethered to the Word is a gift. It’s always a blessing, never deserved, coming from God and God only: “So neither he who plants nor he who waters is anything, but only God who gives the growth” (1 Cor. 3:7).

For believers, the building isn’t the church, but Jesus is building his church. We remember this, and give thanks for it, even as—on a lesser scale—we give thanks for repaired walls, windows gone gray that stream with light, and new chairs for people who yearn to sit under the Word each week.

View a special Christmas greeting from Don Carson and learn more about joining us in ministry here.