I was sitting in the airport burning time before a delayed flight when I started seeing online chatter about the final Jeopardy from November 16. Something about Paul and Hebrews. So naturally I was curious.

The answer read as follows: “Paul’s letter to them is the New Testament epistle with the most Old Testament quotations.”

The correct question, according to the Jeopardy host, was, “Who are Hebrews?”

Cue outcry from the Bible nerds—no doubt assisted by the fact that thousands of us were in Denver at that moment for the annual meeting of the Evangelical Theological Society. The outcry, so far as I came across it, focused on one perceived error in this heavily loaded, game-determining question: most (but not all) contemporary scholars don’t think Paul wrote Hebrews.

But I was more concerned about a deeper issue: it’s not even Hebrews to begin with, and no one seems to care about that bigger error. The most Old Testament quotations are in a different epistle altogether, and it is not even all that close.

Paul and the Mystery of the Authorship of Hebrews

In church circles but especially the seminary and Bible college world, one persistent issue that is basically a running joke at this point is the mystery of “Who wrote Hebrews?”

For a variety of reasons, the general consensus is that we simply do not know—but it likely was not Paul the apostle. In the other letters of Paul, he always identifies himself by name, but not so in Hebrews. The style of Hebrews is fairly different from the main epistles of Paul. The themes that are crucial to Hebrews (Christ’s “Melchizedekian” priesthood; heavenly temple; ins-and-outs of the new covenant) are either absent in the letters of Paul or receive limited attention. By the same token, the themes that are crucial to Paul (union with Christ; justification; Jew/Gentile relationship) are virtually absent in Hebrews. For many, though, the “smoking gun” against Paul as the author of Hebrews is Hebrews 2:3, where the author writes, “It was declared at first by the Lord, and it was attested to us by those who heard.” Paul makes a huge deal about how he had direct contact with Jesus and was not receiving his gospel second-hand from “those who heard” (e.g., 1 Cor. 9:1; Gal. 1:12).

However, there is nevertheless fairly strong historical support for the notion that Paul wrote Hebrews directly or via a secretary. For example, some New Testament manuscripts include Hebrews in some way as part of the burgeoning collection of Pauline letters:

To be fair, some manuscripts of Paul’s letters also lack Hebrews (e.g., Codices F and G), but there are at least several examples that treat it as part of the Pauline collection.

Moreover, some church fathers supported the possibility that Paul played a role in writing Hebrews. Clement of Alexandria and Origen, for instance, held that Paul stands behind Hebrews but a scribe or some other person directly penned it (Eusebius, Ecclesiastical History 6.14.2; 6.25.11–14). In due course Augustine and Jerome also accepted the position that Paul wrote the letter. Even the King James translators would preface the epistle as “The Epistle of Paul the Apostle to the Hebrews.” Nevertheless, other major church figures (from Tertullian to Calvin) attributed the letter to someone else—with options including Barnabas, Luke, or Clement of Rome.

What’s the point? Church history is messier than we often think. Many Christians from antiquity to today have embraced that Paul had a central role in writing Hebrews.

Paul and the Old Testament

My bigger point of frustration with Jeopardygate 2022 is how most Bible scholars who pushed back online only focused on the Hebrews issue (when there should have been more sympathy due to the somewhat messy church-historical issue) and missed the deeper problem.

Hebrews (regardless of whether it was written by Paul) doesn’t have “the most Old Testament quotations” among the epistles to begin with. I understand why it gives that impression, but it is simply not true. 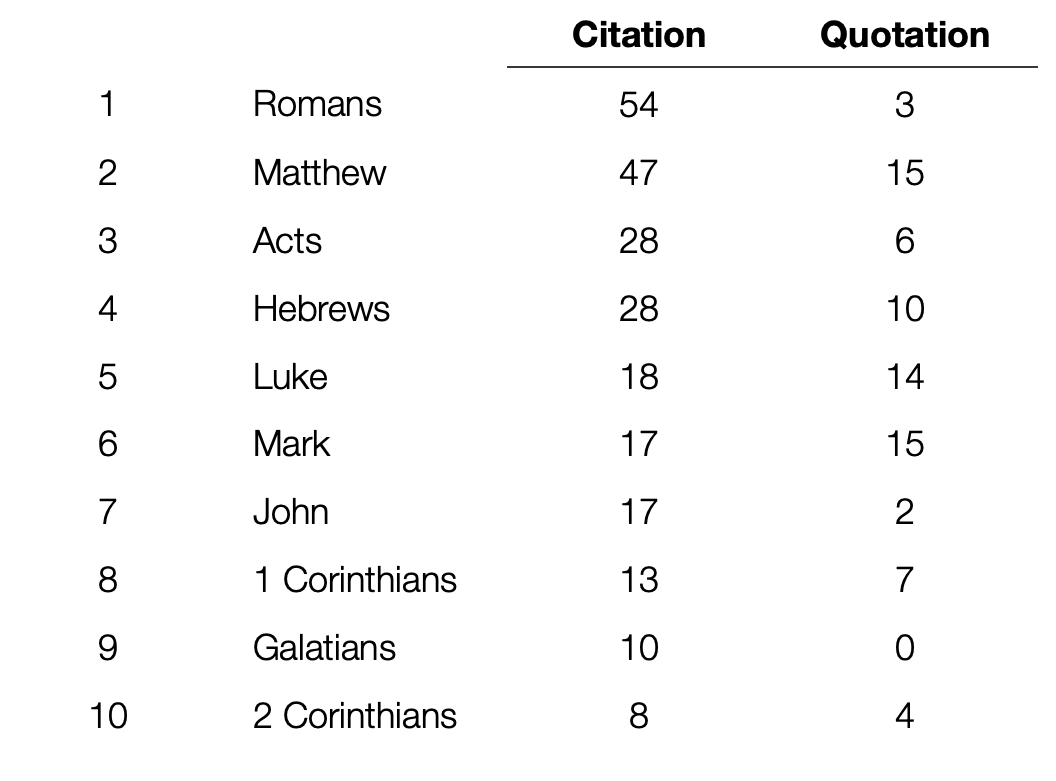 As you can see, Hebrews is tied for third on the list if you count only citations. Romans is by far the winner both in terms of citations as well as the combination of citations and quotations (57 in Romans versus 38 in Hebrews). In fact, Romans 9–11 has nearly as many (30) as all of Hebrews.

So the correct question on Jeopardy should have been, “Who are the Romans.” And it is far less debatable than the authorship question.

What Can We Learn?

I understand the outcry, and I am glad many people take the authorship-of-Hebrews question seriously. But I wish the outcry could have been tempered with a bit more perspective from church history—which is always messier than we like.

Moreover, the Hebrews red herring sadly obscured the real issue, which is missing out on how Romans is far denser in terms of the use of the Old Testament than even Hebrews—though that isn’t to take anything away from Hebrews, of course!

More than anything else, I was simply excited that Jeopardy mentioned “Paul” and “Old Testament quotations” in a final Jeopardy round. While they fumbled it, I’m just glad it was on their radar at all.

Greg Lanier (PhD, Cambridge) serves as associate professor of New Testament at Reformed Theological Seminary in Orlando, Florida. He is also an associate pastor at River Oaks Church (PCA). He lives in Oviedo with his wife, Kate, and their three daughters.