Only in the past century have extravagant weddings become standard fare for people who aren’t members of the royalty. But thanks to the pandemic, short engagements and small budgets and simple ceremonies—by far the norm for most of human history—may be making a comeback, at least temporarily.

When I married decades ago, my fiancé and I felt no pressure after a four-month engagement to do more than exchange vows before a few dozen people in our little country church and then celebrate downstairs with sandwiches, cold cuts, and punch. We spent almost nothing on the wedding, but we did borrow a little money to buy a washing machine, dryer, and some used furniture that included a hideous gold-and-black checked couch.

Thanks to the pandemic, short engagements and small budgets and simple ceremonies—by far the norm for most of human history—may be making a comeback, at least temporarily.

In the ensuing years, I’ve grown increasingly thankful for the serendipitous simplicity of our nuptial vows and have wished the same for other young couples.

So I’ve been delighted over the past two months to see some couples choose to go ahead with a smaller wedding rather than wait months for a more lavish affair. I asked three couples how they came to make their decisions, what they had to sacrifice, and what unexpected blessings came their way. 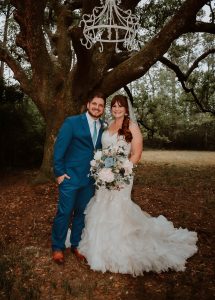 As the coronavirus descended on the country early this spring, one of my students asked our class to pray for his brother’s upcoming wedding, scheduled for May 2. Three hundred and fifty people had been invited.

The groom, Cody Speck (27), realized as the situation worsened that he and his fiancée, Casey (30), wouldn’t be able to have the wedding they’d planned. Living a few states apart, Cody and Casey decided to get married even sooner and hold a bigger celebration with loved ones later.

“Ultimately, we knew we wanted to be married and did not want to wait for an unforeseeable time to enter our covenant together,” Cody said. “Of course, we wanted our family and friends to be there, but that was not the deciding factor for us. The most important thing was moving forward with our covenant to God and one another.”

On April 4, three months after they were engaged, Cody and Casey were married in an outdoor ceremony held on Casey’s sister’s land in Gulfport, Mississippi. A few family members were present; others were able to watch the ceremony through Zoom.

Matt and Kathryn Hartshorne (33 and 30) got engaged in January after dating for five months. They planned a June wedding to be held in Matt’s home church in Ohio and invited several dozen extended family members and close friends to attend. Kathryn, a teacher, lived in Atlanta.

Of course, we wanted our family and friends to be there, but . . . the most important thing was moving forward with our covenant to God and one another.

When the lockdown began and Kathryn’s school transitioned to remote instruction, the couple considered two options facing them: marry quickly and settle in together, or wait it out indefinitely while living 500 miles apart. With the support of their pastor and the blessings of their families (and after finishing premarital counseling), they decided to move the wedding 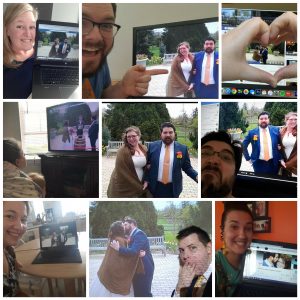 date up to April 10 and stream the ceremony live on Facebook.

On a breezy spring morning, they married in a picturesque park with only their pastor and two attendants. About twice the number of guests they’d expected to attend the originally scheduled ceremony witnessed their exchange of vows online, including friends in several other countries.

Chris and Clare Crane (32 and 25) got engaged last December and were planning a Great Gatsby themed wedding for May 23, a date that meant a lot to them because it falls between their parents’ wedding anniversaries.

When the shelter-in-place orders began, the couple initially thought they’d keep the same date and hold a scaled-down event. But it became obvious that the lockdown wouldn’t end soon. Because they would need to qualify for married student housing where they both attend seminary, Chris and Clare couldn’t risk having their marriage delayed beyond the housing application date by the city’s shelter-in-place orders. So they conferred with their pastor during their last premarital counseling session and decided to change their plans and marry sooner.

On April 18, before a handful of friends and their pastor, they wed.

For Better or Worse 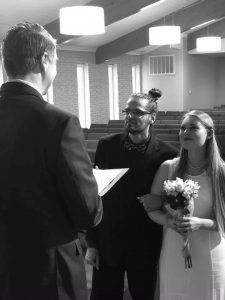 Chris and Clare invested considerable time and energy into planning their wedding, and it was disappointing to have all that effort laid aside. Yet, for them and the other two couples, being unable to have most of their friends and family present to witness and celebrate was the greatest disappointment.

Even so, Kathryn admitted that, secretly, she “always dreamed of a simple, pretty wedding.” And Matt’s family teases him that “all it took for his dream wedding was a pandemic.” Their Holy Week wedding seemed to bring an additional opportunity for friends and family to celebrate. Kathryn received many messages, some from people she hasn’t heard from in years, sharing how much joy their marriage brought “despite the invasive dark season the world currently finds itself in.”

Mostly, all of the newlyweds were thankful to be able to weather the pandemic together, as married couples.

To Have and to Hold

It’s not all sunshine and saved money, of course. The emotional effect of bringing two lives together has been compounded by the emotional effect of the pandemic. Chris and Clare haven’t navigated the difficulties perfectly, “but God has graciously helped us in talking through those moments together,” Chris said.

Despite having a lot they could complain about, “God has helped us both realize we have an abundance of things to be grateful for in this season.”

Newlyweds were thankful to be able to weather the pandemic together, as married couples.

Kathryn said the pandemic has brought “blessings heaped upon blessings in our marriage so far.” Some of them: the lack of financial strain from an expensive wedding, the ability to work a room away from each other, and the chance to really get to know one another in these first days of marriage.

Matt agreed that being “locked in a house together” has been one of the greatest gifts of their pandemic wedding.

“There were some adjustments on my end, as Kathryn moved into my house and I had to adjust my routines around her, but it let us really focus on getting to know each other, instead of sightseeing,” he said. And “we were able to figure out the whole sex thing in the comfort of home, instead of while hotel hopping.”

Get Updates About The Coronavirus In Your Inbox