Harry Hoosier, or Black Harry as he preferred, is one of the greatest preachers ever forgotten.

Hoosier was the first African-American religious figure to gain national prestige. One Declaration of Independence signatory called him “the greatest orator in America.” Likewise, after hearing Black Harry preach several times, John Wesley’s right-hand man, Thomas Coke (1747–1814), journaled: “I really believe he is one of the best preachers in the world. There is such an amazing power attends his preaching.”

Black Harry preached during the Second Great Awakening to both black and white congregations, bringing many to Christ. He was admired across racial lines for preaching the already-not-yet kingdom, but served within a church that treated him as almost-but-not-human.

Because of this treatment, his story is virtually unknown today.

He was admired across racial lines for preaching the already-not-yet kingdom, but served within a church who treated him as almost-but-not-human.

We should honor this prolific revivalist who served faithfully even when he was not honored. Salvation and ministry success should always be credited to the Holy Spirit, but if George Whitefield and Dwight Moody are to be recognized for their contributions, we should know Harry Hoosier.

Hoosier was born in North Carolina around 1750. After being converted in the Methodist tradition, he discovered an immense preaching gift. Freed from slavery, he eventually became the “servant-preacher” of Bishop Francis Asbury, the “Father of American Methodism.” Asbury answered the call of John Wesley to advance the Methodist movement in America, and Hoosier was his traveling partner. Eventually Hoosier himself started preaching, often to groups of slaves. 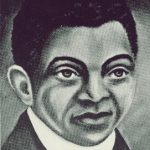 The typical order of service featured Asbury preaching to the white congregations, and Hoosier speaking to fellow African Americans. Soon, however, requests for Hoosier to also preach to the white congregants became routine. It became clear that God’s Spirit was at work in Hoosier, as he saw many converted. Asbury wrote in his journal that to draw large crowds he would announce Hoosier as the headliner.

The Second Great Awakening was a time of rapid growth in Methodist and Baptist churches. Twenty percent of the Methodist movement’s early growth (1790–1803) was due to African-American membership, which overlapped with the height of Hoosier’s circuit preaching.

Upon his death in 1806, a large crowd of both African-American and white followers ushered Hoosier’s body to his resting place in Philadelphia. He was eulogized with the name “African Wonder,” which unintentionally represents both the heroism and adversity of his identity and ministry.

One account of Hoosier’s preaching marveled, “His voice was musical, and his tongue as the pen of a ready writer.”

Hoosier skillfully used melodic speech to extol the glories of God in salvation, while demonstrating a rare ability to bring hearers to moments of emotional tension. He ministered with zeal, prayed with power, and often dramatized biblical stories to proclaim the urgency of salvation. At a most unexpected time, he arrested the hearts of mixed-raced audiences all over the East Coast.

Some 18th-century Quaker communities thought Hoosier spoke by “immediate divine inspiration.” This portrayal of his preaching captures the impressive voice and incredible memory Hoosier put on display as he expounded long passages of Scripture.

Unlike his white contemporaries, Hoosier couldn’t read or write. But while illiterate African Americans were sadly normative, Hoosier’s preaching ability was not. To the surprise of many, whiteness wasn’t a prerequisite for Spirit-filled Bible proclamation; still, many questioned whether such a talent could come from Africa and assumed he must have “Anglo-Saxon blood mixed in his veins.”

Yet despite his influence and partnership in the gospel, white Methodists never treated Hoosier as an equal due to his race. He was never ordained or formally recognized by the Methodist Church.

Into this hostile climate of racial inequality, Hoosier winsomely spoke of freedom and justice. His most notable (and only) documented sermon, “The Barren Fig Tree,” was a clarion call from Luke 13:6–7 for Christians to bear fruit by attending to the affairs of the oppressed negro, “lest they perish.” With grace and poignancy, he managed to preach to the hearts of prejudiced white listeners without provoking antagonism, but instead producing the fruit of repentance.

One eyewitness account tells of a time Hoosier overheard a white hostess at a preaching engagement declare “she would not hear ‘The Black'” preach. Rather than lose heart in despair, he simply prayed all afternoon in anticipation of the evening service. As Hoosier stood in the pulpit later that evening, he spoke about how all people are suffering from sin, but that God has sent a gospel remedy via a physician—a black physician—to heal sinners from their condition. He boldly challenged his white listeners to consider why they would reject God’s physician-messenger just “because his hands were black.” That night God used Black Harry to convict the hostess and many others as they responded to the gospel and repented of their bigotry.

Historian William D. Piersen makes a strong case that the origins of Indiana’s nickname can be traced to followers of Harry Hoosier. While the jury is still out on this claim, it’s often the case that the hidden figures of history turn out to be pillars on which we stand.

Although we lack many primary sources and manuscripts documenting Hoosier’s legacy, may the remnants of what we have challenge us to bring other stories like his to light in these troubled times.

Courtlandt Perkins is a husband, father, and Master of Theology student at Southeastern Baptist Theological Seminary. He serves the Kingdom Diversity team at Southeastern, and he’s a member of Imago Dei Church.