This is an adapted excerpt from the new book Christ Has Set Us Free: Preaching & Teaching Galatians (Crossway/TGC) edited by D. A. Carson and Jeff Robinson Sr.

The Christian faith and the 500-year-old Reformation stand or fall with the truth of Paul’s teaching in Galatians. This letter deals with matters on which your eternal destiny hangs. 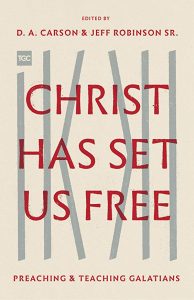 If anyone is preaching to you a gospel contrary to the one you received, let him be accursed. (Galatians 1:9)

Therefore, the letter of Galatians, the Reformation, and Christian conviction on justification should echo in us with unparalleled seriousness on at least three levels:

Just think of it: accursed (Gal. 1:9). Whose curse? Paul’s? Paul’s curse is nothing compared to God’s curse. Paul says in 3:13, “Christ redeemed us from the curse of the law by becoming a curse for us.”

This is happening to people in your church and your family. They are being exposed to kinds of “gospels”—which are no gospel—every day. They are being lured away from Christ as their supreme treasure and away from grace. And they need to hear a very serious word from you.

You are severed from Christ, you who would be justified by the law; you have fallen away from grace. (Gal. 5:4)

O foolish Galatians! Who has bewitched you? It was before your eyes that Jesus Christ was publicly portrayed as crucified. . . . Did you suffer so many things in vain—if indeed it was in vain? (Gal. 3:1, 4)

Woe to the pastor or the worship leader who creates an entertainment atmosphere in their church where this kind of seriousness feels out of place.

Two of the great, indispensable truths of the Christian faith that the Protestant Reformation recovered in Scripture—and from under the mountains of sacramentalism, ritual, and meritorious works in the Roman Catholic Church—were the supreme authority of Scripture over all human authority (including the pope and all councils), and the truth that sinful human beings stand justified before God, not on the basis of any righteousness of their own doing, but only on the basis of Christ crucified, risen, and righteous.

Those two recoveries are sometimes called the formal principle (the supreme authority of Scripture) and the material principle (justification by faith alone) of the Reformation.

Exegete Galatians 1 from the Bottom Up

In chapter 1, the focus falls heavily on the foundation of the gospel in its divine origin through Paul’s apostolic authority, not on the material content of the gospel of justification. Perhaps the best way to approach this is by focusing on Paul’s argument, not in the order that he gave it, but by rebuilding his argument from the deepest foundation he mentions to the final outcome, with each step in the argument building on the one that most immediately supports it.

Let me illustrate. Suppose you say to me, “I can’t talk now, I’m late; I have to hurry or I’ll miss my train.” If I want to tell someone what you said, I could just repeat it as you said it. Or I could analyze it and then rebuild it starting with the deepest foundation and ending with the final outcome. So, it would go like this: “He was late. Therefore, he was about to miss his train. Therefore, he was in a great hurry. Therefore, he couldn’t talk to you.” The order of the four statements in my exposition is totally different from the order you spoke them. But the logic is exactly the same.

Here’s the reason I find it so helpful to think like this. Where there are only four statements, you can see immediately and intuitively what the logical connections are—what’s the cause and what’s the effect. But when you are dealing with 24 verses, as we are in Galatians 1, you can easily lose track of how the pieces fit together.

That’s one of the things I think preaching is for: to make the structure of the argument plain. One way to do that is to rebuild it from the deepest foundation to the final outcome, with each step in the argument building on the one that most immediately supports it. Going at it that way helps Paul’s readers to see why he is so wrought up over those who would preach another gospel. Indeed, we should follow his example for, as Paul puts it, there is no gospel other than the one he preached.

John Piper serves as founder and lead teacher at Desiring God and is chancellor of Bethlehem College & Seminary. For 33 years, Piper served as pastor of Bethlehem Baptist Church, and he is a Council member of The Gospel Coalition. He has authored more than 50 books, and more than 30 years of his preaching and writing are available free of charge at desiringGod.org.