“A time is coming when you will worship the Father neither on this mountain nor in Jerusalem.” (John 4:21)

If Jesus didn’t care about worship spaces, why should we? Isn’t it more important to worship “in spirit and in truth” than in sanctuaries designed by famous architects?

Let’s get this out of the way: God-honoring worship can happen anywhere—a strip mall, a bowling alley, a rented high-school cafeteria, wherever. And the how—worshiping Jesus in spirit and in truth—is far more important than the where. But in 2,000 years, the global church has created some awesome architectural spaces that glorify God just by being. And in about a tenth of that time, the United States has produced a few as well.

In 2,000 years, the global church has created some awesome architectural spaces that glorify God just by being.

There are a number of church buildings by famous architects (Boston’s Christian Science Church by I. M. Pei, for example) that are worth an architect’s time to go see but, for me, aren’t all that inspiring. They make the short list for architectural history courses without (in my view) achieving the transcendence of the nine structures cited here.

Here are nine worship spaces in America you should make a note to see. Any are worth adding a half-day to visit should you happen to be near one of the cities they bless. 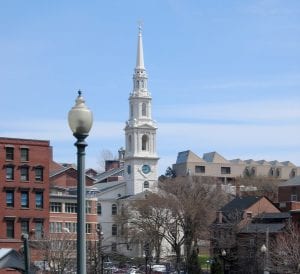 Located just down the hill from Brown University (named for Joseph’s nephew), this colonial church is as impressive for the stories it holds as for its architecture. One of the country’s most historic churches, this 1775 building features reserved-seating boxes more befitting a fancy stadium than a church, but that’s how colonial-era churches rolled 250 years ago. It’s worth noting that many of the patrons of this downtown congregation (including, notably, the Brown family for which the university is named), participated in the slave trade—until they didn’t. That story is too complex to summarize here, but the curious mix of Protestant asceticism—this church is plain to the point of pain—and moral ambivalence makes this a most interesting place to visit.

The “new” St. Louis cathedral was constructed in 1914 to replace the “old” cathedral still standing at the foot of St. Louis’s famous arch. This basilica is Romanesque in style, which means semicircular arches define its principal space. But what makes this space worth a visit is the astonishing 83,000 square feet of mosaic tilework that covers virtually every inch of the ceiling above the tops of the columns. Both pictorial and decorative, the tilework is a tour de force of craft and a gospel narrative as compelling as any stained-glass essay you might see in Europe. 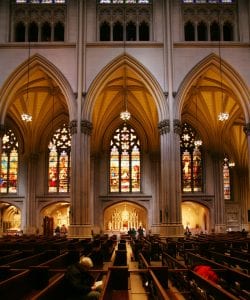 Since Europeans didn’t arrive in North America until the 17th century, the United States is largely lacking in Gothic cathedrals. But of the few that exist, this 1910 specimen is by far the most impressive. My first visit here, on the cusp of graduating from architecture school, was also my first experience of a building literally taking my breath away. It’s interesting to note that this full-on Gothic cathedral—which some consider an ahistorical oddity, since the Gothic style was by then a half-millenium out of date—is contemporaneous with Wright’s Unity Temple, showing the progressive nature of the latter and the throwback character of the former.

Unitarianism is deeply problematic theologically (as are other theologies preached in many of the spaces on this list). But this masterpiece by Wright is still worth seeing. The main worship space is a sublime composition in wood and plaster, virtually all right angles. The exterior is cast-in-place concrete, a shocking choice in 1908 that seems only a little less radical today. But Wright’s mastery of form and surface makes this concrete building far from brutal. Though I would never recommend concrete as an exterior material for a church, Wright pulls it off in this instance with relative ease. 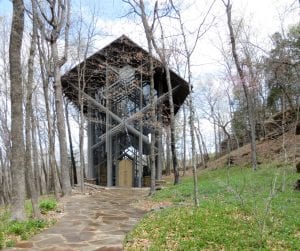 This small chapel is a wonder in every way. Tucked into a forest glade, reachable only on foot, this masterpiece is literally crafted from two-by-fours (like you could buy at Home Depot) that had to be hand-carried to the site. Perhaps unsurprisingly, Jones was an apprentice of Frank Lloyd Wright, and his work is often mistaken for Wright’s. But Jones developed a mature style entirely his own. This chapel is the high-water mark of a distinguished architectural career, and by itself earned Jones the Gold Medal of the American Institute of Architects. While you’re in northwest Arkansas, check out Jones’s other chapel in Bella Vista (as well as Moshe Safdie’s Crystal Bridges Museum of American Art in Bentonville).

One of the best buildings of the 20th century is this transcendent 1962 building designed by uber modernist Walter Netsch. While some of his work on college campuses is nearly uninhabitable, this jewel box is on every architect’s must-see list. The soaring nave appears to be composed of folded steel triangles, a work of architectural origami unequaled before or since. 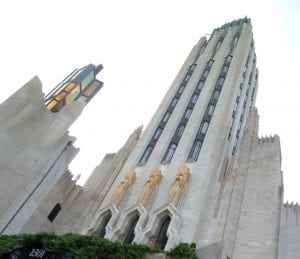 Another Wright apprentice, Bruce Goff, figures heavily in the design of this extraordinary Art Deco building in downtown Tulsa—although Goff’s high-school art teacher, Adah Robinson, is also credited for the design. Regardless of who drew it first, this 1929 church is a one-of-a-kind American original. It bears the marks of a superior talent who wasn’t afraid to push the boundaries of mainstream taste for a mainstream congregation. Strongly influenced by the 1920s Art Deco movement, the mosaic tile altarpiece and stained glass windows are not to be missed.

8. Cathedral of Our Lady of the Angels, by Rafael Moneo (Los Angeles, California)

Opened in 2002, this new cathedral is one of few church buildings built in the last 50 years in the United States to take worship seriously. The indirect approach, the materiality, the use of light, all call out to the spiritual nature of humanity in ways no converted strip mall ever could. Like the Air Force Academy Chapel, it is one of the few thoroughly modern worship spaces that celebrates transcendence without resorting to any of the traditional forms one might associate with “religious architecture.” This is a hopeful sign for architects who want to honor God without repeating past styles and patterns, although I for one see nothing wrong with the latter approach if you’re not as gifted as Rafael Moneo. 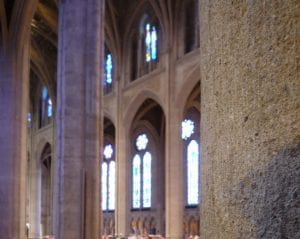 If you’re looking for a punk-rock Gothic cathedral, downtown San Francisco is where to look. At first glance, Grace Cathedral (completed in 1964) looks full-on Gothic, but closer inspection yields some surprises. Surprise one: Look at the ceiling. Instead of stone ribbing, you get steel trusses, and no finished ceiling at all—pretty punk for a cathedral. Surprise two: Take a close look at the columns in the nave. They’re not stone; they’re concrete. To me, a concrete cathedral with no ceiling passing for Gothic seems a perfect fit for San Francisco.

David Greusel is an architect and founding principal of Convergence Design. A fellow in the American Institute of Architects, David has more than 30 years of professional experience in architecture. He specializes in public assembly architecture, including stadiums and arenas. He was the lead designer for Minute Maid Park (home of the Houston Astros) and PNC Park (home of the Pittsburgh Pirates). He lives in Kansas City and worships at Christ Community Church.