On a drive home from work recently, I heard actor Brad Pitt being interviewed on the radio about an upcoming movie of his. The interviewer asked Pitt about his spiritual upbringing.

“It was Sunday school and do good and Bible study and daily prayer,” he told Terry Gross on the National Public Radio show, “Fresh Air.”

I don’t know at what point I became aware that other cultures believed in different religions, and my question was, “Well, why don’t they get to go to heaven then?” . . . And that didn’t sit well with me then. But in times of trouble or discord, it’s a great comfort. And it wasn’t till I left home that I really came to the conclusion that it didn’t make sense to me for many other reasons.

Although he doesn’t fit into the age range of David Kinnaman’s research catalogued in You Lost Me: Why Young Christians Are Leaving the Church . . . and Rethinking Faith, Pitt represents the mindset of many 18-to-29-year-olds who were raised in a church but now, as adults, no longer consider themselves a part of it. That sucking sound you sense is this black hole of the church.

Kinnaman is president of The Barna Group and the author of the book, unChristian. You Lost Me is a sequel to that book, which looked at the reasons young non-Christians reject church and the changing reputation of evangelical Christians. You Lost Me looks closer at the “insiders,” young people who were raised in the church, to find out why they left.

Kinnaman estimates 60 to 80 percent of those raised in a church are no longer active in their faith or consider themselves church members—or even Jesus followers—by the time they are in their mid-20s. Traditionally, many church leaders have considered that a normal time of searching and that when a generation becomes 30something and they have children of their own, they will return. And that has been true with previous generations. The problem, Kinnaman points out, is that may be true with this generation.

The data that forms the foundation of Kinnaman’s book was compiled from hundreds of thousands of interviews, conducted over a 27-year span. For this book alone, the people with the Barna Group conducted 5,000 new interviews with 18- to 29-year-olds, asking them to describe their church experiences, their faith, what has pushed them away and what connections remain. 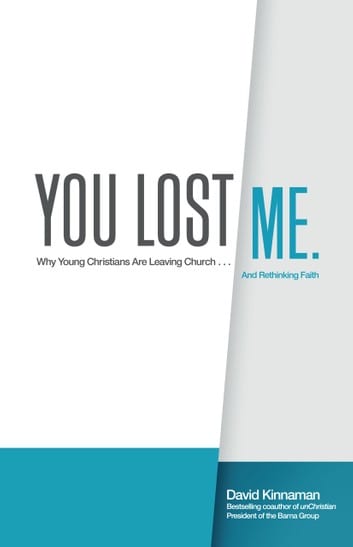 You Lost Me: Why Young Christians Are Leaving the Church . . . and Rethinking Faith

You Lost Me: Why Young Christians Are Leaving the Church . . . and Rethinking Faith

Close to 60 percent of young people who went to church as teens drop out after high school. Now the bestselling author of unChristian trains his researcher’s eye on these young believers. Where Kinnaman’s first book unChristian showed the world what outsiders aged 16–29 think of Christianity, You Lost Me shows why younger Christians aged 16–29 are leaving the church and rethinking their faith.

“The experimental and experiential decade from high school to the late 20s is the time when a young person’s spiritual trajectory is confirmed and clarified,” Kinnaman writes. And currently that trajectory doesn’t look so good.

So what happened to them?

The answer is contained in the title, You Lost Me. It reflects a common answer given by young adults when they explain why they no longer consider themselves a part of the church. “When someone uses this idiom, they are suggesting that something hasn’t translated, that the message has not been received,” Kinnaman writes. The church, he says, has failed to train and equip young people to be in but not of the world, as the Apostle John writes. Instead, in the view of the millennial generation and Kinnaman’s research, the church is overprotective, shallow, anti-science, repressive, exclusive and is not a place that allows the expression of doubt. In general, the church discourages engagement with the culture, offers cliché-ridden answers to real-life problems, and a mechanistic approach to youth discipleship learned in seminaries. The church is seen as a creativity killer where risk taking and being involved in culture are anathema. “They don’t want to be consigned to the ‘Christian ghetto,’ a phrase that consistently comes up in our interviews.”

The problem with young adults dropping out of the church, and sometimes even abandoning their faith, is a disciple-making problem, Kinnaman says.

“Many of the assumptions on which we have built our work with young people are rooted in modern, mechanic, mass production, instructional paradigms,” Kinnaman writes. “Some (though not all) ministries have taken cues from the assembly line, doing everything possible to streamline the manufacture of shiny new Jesus-followers, fresh from the factory floor. But disciples cannot be mass-produced. Disciples are handmade, one relationship at a time.”

The good news is that 42 percent of 18- to 29-year-olds—those not included in the three categories above—remain passionate about engaging the world with the gospel and say they are very concerned about their generation leaving the church. And it’s also worth noting that the majority of the dropouts are not walking away from faith, they are putting involvement in church on hold. They are struggling less with their faith in Christ than with their experience of church, which often offers “a lifeless shadow of historic Christianity” more interested in conveying “a lot of information about God than leading others to live in the reality of God.”

You Lost Me is peppered with the stories of individuals who participated in his research, giving the book a more human face. He also includes a number of examples from popular culture, including the stories of Katy Perry, Jim Colbert, and the Kings of Leon who have left the church, if not their faith. “It’s no small coincidence that many of today’s hottest entertainers and artists left behind a churchgoing heritage,” Kinnaman writes. “The church has a hard time preparing these young people for service to the world, while also keeping them grounded in and deeply connected to the body of Christ.”

Kinnaman acknowledges that there are “new pressures facing the entire Christian community as we seek to pass on the faith. … No generation of Christians has lived through a set of cultural changes so profound and lightning fast.” Those are conditions that demand the church to adapt, not to be “relevant” or contemporary, but to re-emphasize the mission of God and the reality of God in our daily lives. Otherwise we are facing the specter of a lost generation. Hopefully it’s not too late.

Dan Benson is a journalist living in Port Washington, Wisconsin.