When TGC asked me to review Matthew Crawford’s The World Beyond Your Head: On Becoming an Individual in an Age of Distraction, I was immediately interested. I had just seen the cover story on a current issue of the Chronicle of Higher Education’s Chronicle Review with the provocative title, “Can Matthew Crawford Deliver Us from Distraction?”

Crawford is a PhD in philosophy and a senior fellow at the University of Virginia’s Institute for Advanced Studies in Culture and the author of a previous bestselling book, Shop Class as Soulcraft: An Inquiry into the Value of Work.

The World Beyond Your Head addresses a major problem in our culture: the never-ending intrusions and interruptions of electronic devices and social media. These things constantly distract us from what is truly important. A satirical piece cited by Crawford from The Onion vividly captures this problem:

GAITHERSBURG, MD—While cracking open his second beer as he chatted with friends over a relaxed outdoor meal, local man Marshall Platt, 34, was reportedly seconds away from letting go and enjoying himself when he was suddenly crushed by the full weight of work e-mails that still needed to be dealt with . . . an upcoming wedding he had yet to buy airfare for because of an unresolved issue with his Southwest Rapid Rewards account, and calls that needed to be returned.

“It’s great to see you guys,” said the man who had been teetering on the brink of actually having fun and was now mentally preparing for a presentation he had to give on Friday and compiling a list of bills that needed to be paid before the 7th. “This is awesome.”

“Anyone want another beer?” continued Platt as he reminded himself to pick up his Zetonna prescription. “Think I’m gonna grab one.”

Platt, who reportedly sunk into a distracted haze after coming to the razor’s edge of experiencing genuine joy, fully intended to go through the motions of talking with friends and appearing to have a good time, all the while he mentally shopped for a birthday present for his mother, wracked his brain to remember if he had turned in the itemized reimbursement form from his New York trip to HR on time, and made a silent note to call his bank about a mysterious recurring $19 monthly fee that he had recently discovered on his credit card statement.

Almost all of us can relate to Marshall’s fragmented state of mind. Multiple secondary and tertiary obligations buzz around in our heads, preventing us from being truly present to the people and concerns that matter most.

What is new in Crawford’s book isn’t his calling attention to the states of distraction accentuated by our screens and devices. This has already been done by other cultural analysts such as Nicholas Carr (The Shallows: What the Internet Is Doing to Our Brains) and Sherry Turkle (Alone Together: Why We Expect More From Technology and Less From Each Other). Rather, Crawford’s incisive analysis shows us how digital technologies are embedded in the wider context of consumer capitalism and a specific view of the human person: the Enlightenment’s concept of the autonomous self. According to Crawford, the problem isn’t just technology—it’s a mistaken view of the self and the consumerist and narcissistic cultural context in which we use technology. Christians can use this analysis to yield valuable insights for church and ministry. 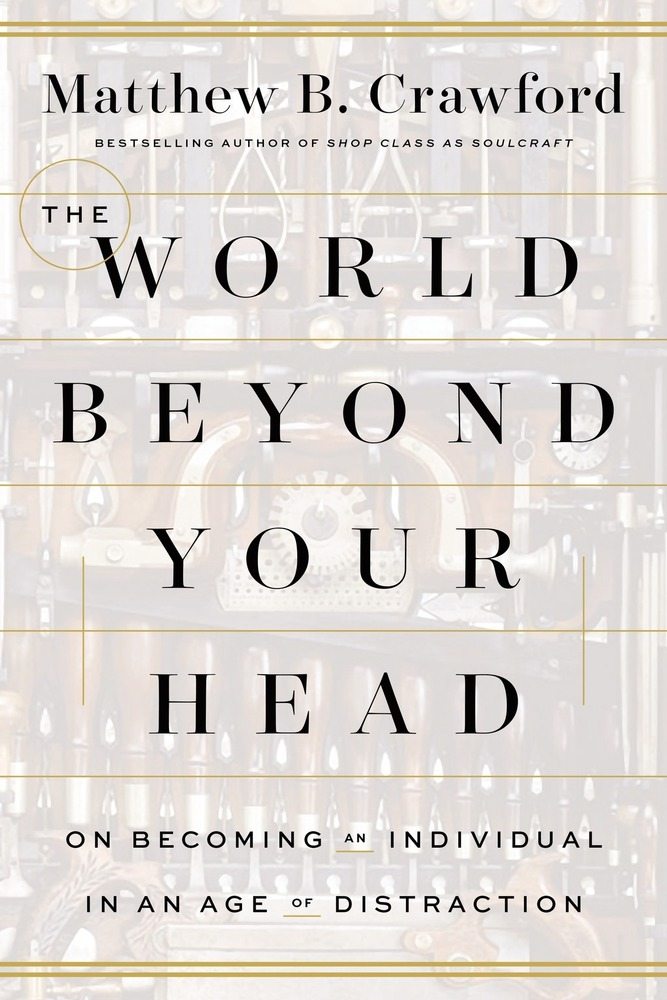 The World Beyond Your Head: On Becoming an Individual in an Age of Distraction

The World Beyond Your Head: On Becoming an Individual in an Age of Distraction

Crawford argues that our modern and postmodern cultures are rooted in the Enlightenment notion of an autonomous (literally “self-law”) self, or as I suggest, an “Enlightenment-Romantic autonomous self,” characterized by unconstrained freedom of choice in the satisfaction of personal desires. This Enlightenment “project of liberation,” crafted by thinkers such as René Descartes, John Locke, Immanuel Kant, and Jean-Jacques Rousseau, was originally forged in a historical context liberating individuals from the “arbitrary” political and religious authority of kings and priests, and from tradition and traditional Christian morality.

The “free” individual defined “truth” according to the ideas grounded in his own head and defined personal identity (and now gender) according to the “feelings’” discerned from the depths of his own affective experience. This new man or woman needed to be freed from the traditional constraints of family, church, neighborhood, and tradition. Today, in the context of a consumerist and entertainment-driven media culture, the individual is not only “free” but all too often submerged in a sea of images. He is constantly bombarded with commercial messages competing for his fragmented attention and struggles with feelings of loneliness, isolation, depression, stress, anxiety, and addiction.

So how does Matthew Crawford propose to “deliver us from distraction”? His proposal appears to be a somewhat new version of the Arts and Crafts Movement of the late 19th and early 20th centuries associated with John Ruskin and William Morris. They saw the practices of craftsmanship as pathways to true human individuality in the context of a mechanized and standardized (now digitized and “mediated”) mass culture produced by the Industrial Revolution. He points us to skilled glass blowers, makers of Baroque pipe organs, short order cooks, motorcycle riders, and repairmen as examples of individuals in touch with real physical objects and in real communities of skilled practices that value history and tradition. They recognize the authority embodied in the mentors and skilled practitioners of such crafts and trades. So far, so good. But what about those of us not employed in the skilled trades? What about “knowledge workers” and those in business professions, human services, and Christian ministry?

Crawford’s emphasis on communities of skilled practices can be applied and transposed into the Christian contexts of church and ministry. Corporate worship is itself a “skilled practice”—one in which Christians will need to learn anew to “pay attention” more intentionally to the God who is really present on Sunday morning. We can strengthen our ability to focus our attention on the living and risen Christ by cultivating the practice of biblical meditation.

I agree with Crawford that we need an alternative to the Enlightenment’s autonomous self. Yet I go a step further than him in recognizing a biblical and Christian interdependent self—the new creation individual whose identity is grounded in union with Christ and the body of Christ. The biblical metanarrative of creation, fall, redemption, and new creation provides a more comprehensive worldview and philosophical basis than what Crawford proposes. But it’s here his incisive critique of our distracted modern culture can help us.